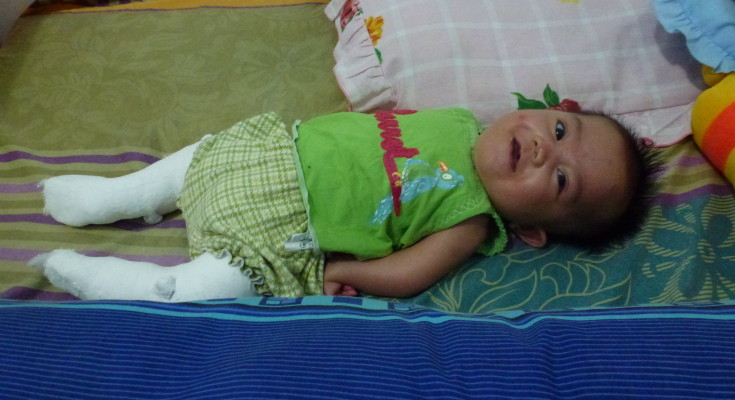 She came into the world deformed and unwanted 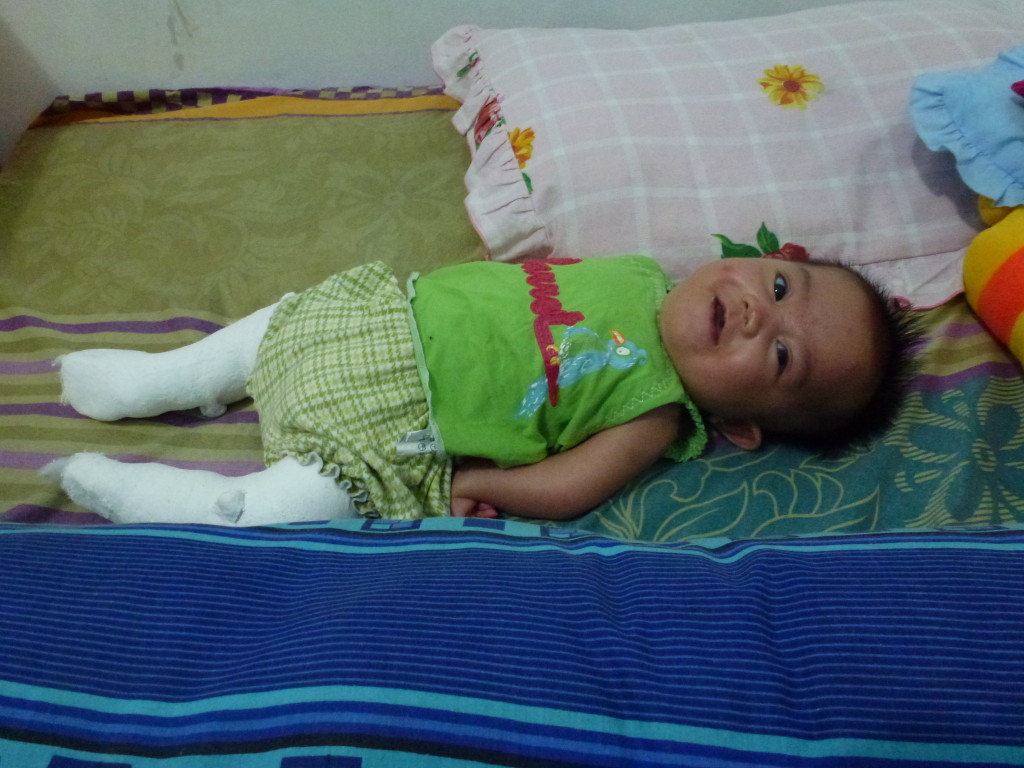 Amel came into the world deformed and unwanted

Sometimes the pitiful condition of a particular child hits you particularly hard. Amelia, born on the 3rd of June this year gets under my skin. She was born prematurely, but worse, severely deformed. Tiny club feet, shriveled little birdlike claws instead of tiny cute human hands. Something wrong with ‘down under’, which I have not seen (yet). But even that is not the worst part of her fate. Amelia was unwanted. After her mother had barely recovered from the caesarian operation needed to bring Amelia into the world, she sneaked out of the hospital, leaving Amelia behind. Did she abandon her because being unmarried, never wanting to keep her baby anyway? Had she tried to abort the fetus growing in her womb causing Amelia’s deformities and now felt guilty? Or did she become desperate at sight of her newborn baby girl, frantic at the prospect of having to take care of a crippled child all her life? Only she can answer these questions. However, there is no way of posing these questions to her. 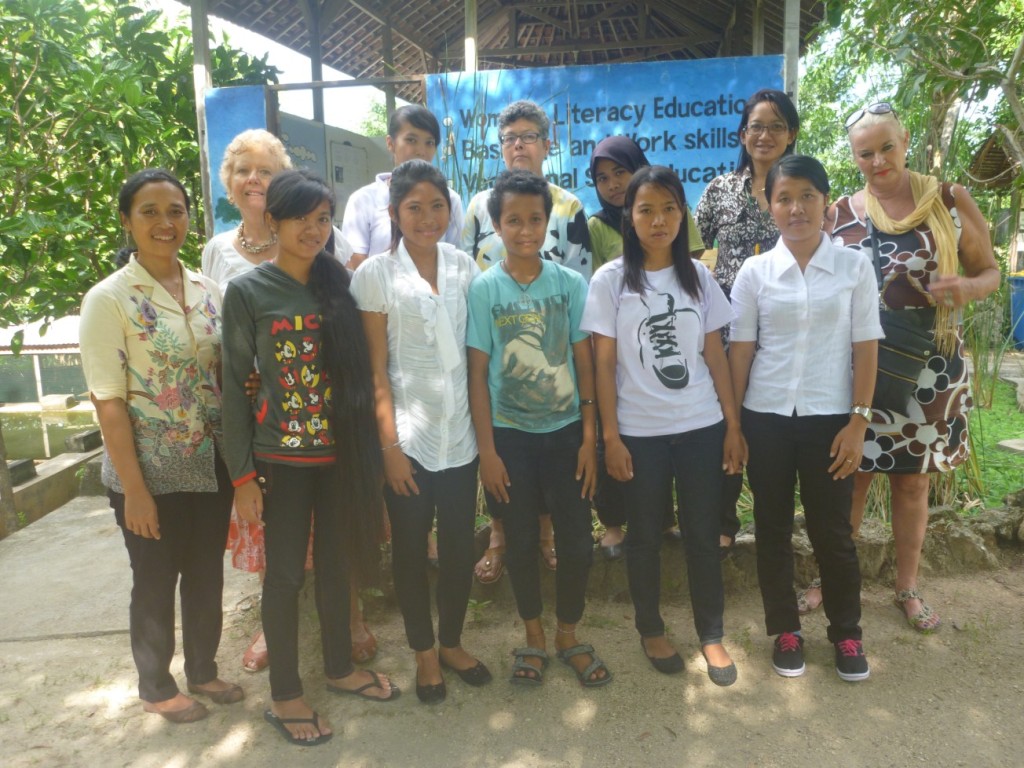 At a BIWA activity

Amelia’s mother has vanished into thin air. When the police tried to find her at the address she had given when admitted to the hospital the address turned out to be false. One can only conclude from this, that her mother already had the intention of abandoning Amelia. Probably I should feel sorry for Amelia’s mother. Actually I do. She must have been under tremendous pressure, otherwise she would not have acted the way she did. Still, it is not easy to feel compassion for her. How can a mother be so cruel as to leave her own new born behind? On the other hand, who am I to judge her? It ìs a tremendous burden when an unmarried mother, often not accepted by her family, has to raise an infant on her own who will probably be an outcast her entire life too. All the more when the mother is a village woman who has not the faintest idea to whom to turn to for help.

Because no relative claimed Amelia and she could not stay at the hospital forever, the Department of Social Welfare of the Province of Bali took over the custody of Amelia. Having no facility to take care of the infant, the Department transferred Amelia from the hospital to an independent foundation, the Foundation Care for Bali (Yayasan Sayangi Bali) on the 13th of August. This foundation, established in 2012, takes in foundlings with the purpose of putting them up for adoption. The organization I chair, the Bali International Women’s Association (BIWA), supports this foundation since June by paying for the salary of one of the nannies seeing to the daily needs of the babies. Meanwhile BIWA has been able to raise enough funds for two out of the four nannies working there until the end of 2015.

I saw Amelia for the first time in a picture taken by a Japanese BIWA member who visited the Foundation in early October to bring diapers and baby clothes she had brought from her home country. In that picture Amelia looks as happy and healthy as any of the other six babies looked after at YSB, smiling sweetly with bright eyes brimming with life. At first sight nothing appears to be wrong with her. Until one’s gaze wanders to her little feet and hands. Later that month I saw Amelia with my own eyes and realized she may have a bleak future if nothing is done, starting as soon as possible. Years ago my husband and I raised funds for and organized an operation for a 7-year old girl with club feet to have an operation which at least has enabled her to walk upright, albeit still with a limp. The orthopedic specialist deplored that her parents did not have their daughter operated in the first year after birth, because in that case her feet and legs would have developed normally.

So I suggested to Pak Dewa Wirata, the director of YSB, to have Amel – as she is called at the foundation – examined as soon as possible by the same specialist at the provincial hospital in Sanglah because he had operated on Koming for free. We only paid for the expenses of her hospitalization and medicine. Pak Dewa took immediate action and on 20 October Amel was operated upon by another orthopedic doctor, a recently graduated specialized in correcting club feet. Wonderful news, of course. But it is also crystal clear that Amel still needs a range of operations in the years to come. The expenses are estimated at 50 million rupiah (approximately 5000 dollar) for hospitalization, medication and implements Amel might need. I suspect that this is very modest estimate, too low in fact. BIWA has a policy of not providing funds for medical care of individuals because it would quickly deplete the funds we raise for our social wlefare funds. But we start building a BIWA ‘aunt’ fund for Amel.  By the way, we have already raised money for an additional nanny who can accompany Amel at the hospital throughout 2015.

I truly hope that others have the heart to help. Are you one of them?

Sita van Bemmelen is BIWA President 2014. You may contact her at bemmelen.sita@gmail.com