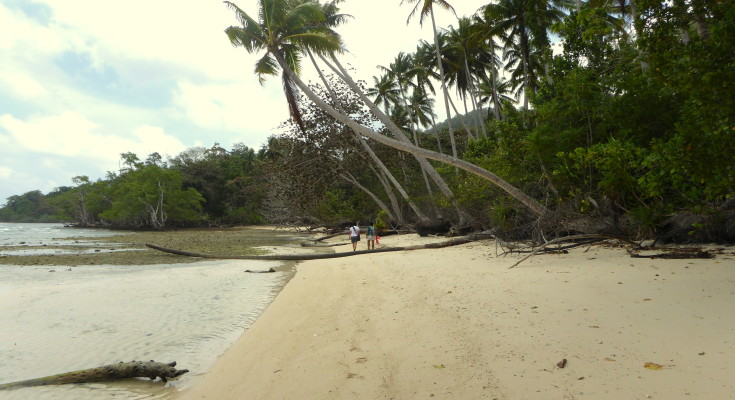 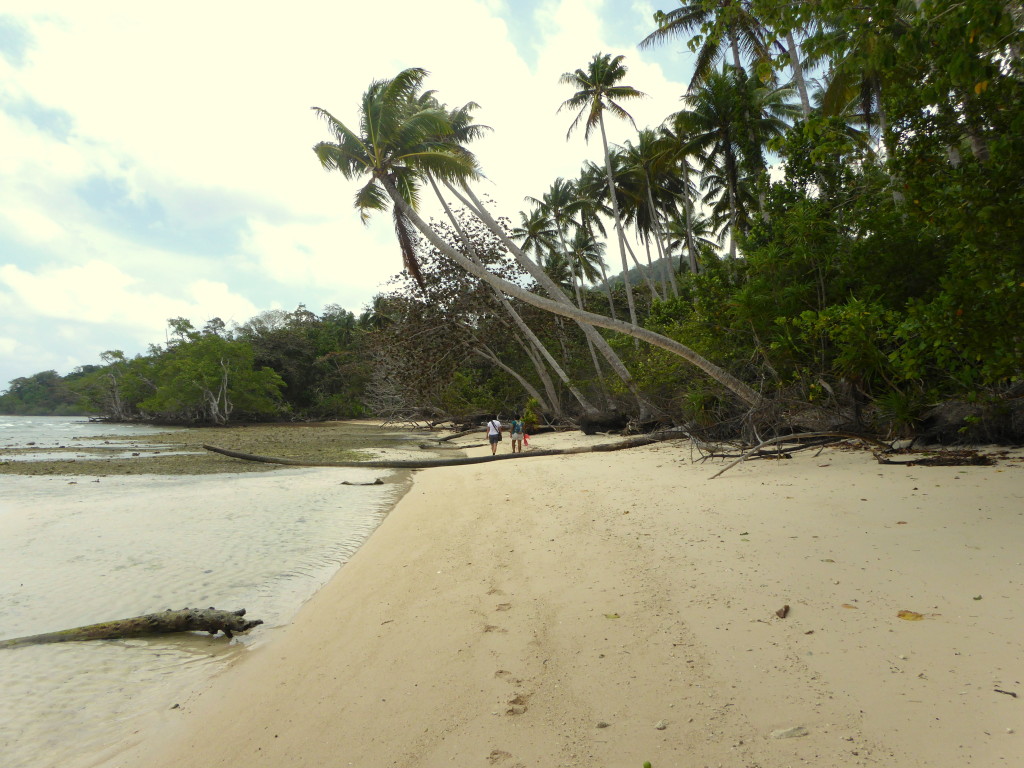 A paradise beach on Waigeo Island

Before coming to the wonderful world of the Raja Ampat Islands we made a stop in Timika on the south coast. Further up north is the well-known American Freeport coppermine. The original plan of our travelling group was to go up the Carstensz Pyramid – the Puncak Jaya – with its 5000 meters the highest mountain in Papua. Once considered very mysterious by sailors who saw the white shining glaciers while sailing along the south coast of Papua. In the1930s the Dutchman Anton Colijn made two attempts to climb the Pyramid, the Puncak Jaya, but he failed. It was the Austrian mountaineer Heinrich Harrer who, in 1962, was the first to climb the Pyramid to the top. In Timika we visit the local markets. Most shopkeepers are migrants from other Indonesian provinces. Papua people are selling their vegetables and fruits outside the markets and on the streets of the town.

Half an hour drive from Timika  a few members of the Kamoro people  show us their woodcraft: small statues, shields and decorated poles. To my surprise two of the sculptors – Jopi and Paulus – tell me they made a long journey to the Tropical Museum in Amsterdam to work there on huge poles. Traditionally these ceremonial poles are placed at the entrance of a ceremonial house. In The Netherlands the Museum of Ethnology in Leiden and the Tropical Museum in Amsterdam have a large collection of Kamoro art and also of Asmat art. Asmat peol;e, also living on the south coast, are especially famous for their large bisj-poles.

For technical reasons our planned mountain trip up the Carstensz Pyramid had to be cancelled. Instead we flew to Sorong, capital of the Bird’s Head peninsula. It is the gateway to the Raja Ampat archipelago, a diving destination which was recently visited by the Indonesian President Joko Widodo. Raja Ampat – meaning Four Kings – consists of four main islands – Waigeo, Batanta, Salawati and Misool – and 2.500 smaller islands. The area is situated in the so-called Coral Triangle boasting an enormous diversity of coral, fish and crustaceans.

From the port of Sorong a ferry took us in two hours to the village of Waisai on Waigeo Island. The Raja Ampat archipelago can best be visited in the months from October till April; the best conditions are between mid-October and mid-December. So our visit in August is quite exciting because of the strong monsoon winds resulting in big waves. It is an adventure sailing around the islands in a small speedboat. Papua captain John knows his trade, but to be frank from time to time it is absolutely scary.

Spectacular view from above on Wayag Lagoon

The first day we spent sailing, admiring the amazing scenery of islands and spectacular rocks, overgrown with bushes and trees. Sleeping in bamboo huts, right on the beach, rather primitive but a pleasure to be there. Next day a walk along the coast, partly on the beach and partly through the jungle and mangrove forests. Then sail on to a village where we are welcomed by singing children and a sword dance performed by two men. Later on, in the dark, starry night, we are treated with music and dance. The dance is so exciting that we join the dancing crowd. We still hear the drums and flutes while resting in the wooden house of a villager.

Raja Ampat is ideal for snorkelling in a wonderful underwater world with a great variety of fish and coral in a place well protected by a number of rocks and small islands. The boat also takes us to a place where the Papuans put their deceased on the rocks. A skull and some bones are still visible. Hard to figure out how they did that because the rocks look very inaccessible. There are also rock drawings featuring among others a boat and a monkey. In a cave with enormous stalactites bats are flying around disturbed by our arrival. Not just the ocean offers challenges. On the small island of Wayag we climb to the top of a steep hill with very sharp rocks. I feel rather ashamed seeing our Papuan guide walking ahead on his bare feet, straight up and not using his hands like I do. But we finally make it to the top and the view of the lagoon is mesmerizing. After a difficult descent we are glad to wash off the sweat in the blue ocean.

Parking the speedboat in Wayag lagoon

On our last day in Waisai, on Waigeo Island, we got up at four in the morning with great expectations. Will we have a chance to watch one of the icons of the Indonesian fauna? A local guide leads us deep into the jungle to watch the splendid birds of paradise, so vividly described by the famous British biologist Alfred Russel Wallace. At dawn a loud “wok, wok, wok” announces the arrival of the Red Bird of Paradise, a species which Wallace discovered on the island of Waigeo in 1858. A red flame is performing its wild dance on a high branch. On another spot near the ground a blue and yellow coloured bird of paradise is building a nest, running around like a madman. 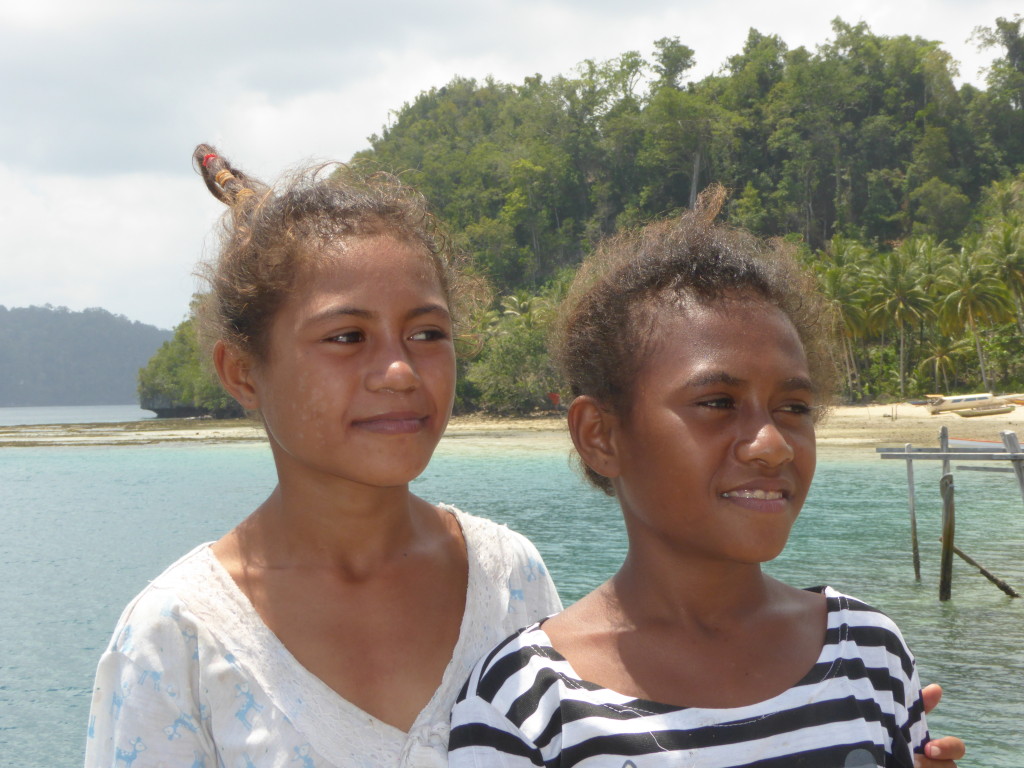 Never seen such  a beautiful hair-do

Seeing these rare birds was certainly one of the highlights of our trip. Raja Ampat – possessing one of the largest nature reserves in Indonesia – deserves its reputation of being a marvel of nature. With its underwater scenes, the beautiful colours of the ocean, the unrivalled starry skies, the wide beaches, the jungle and the hospitable villagers – it all added up to a most memorable journey.