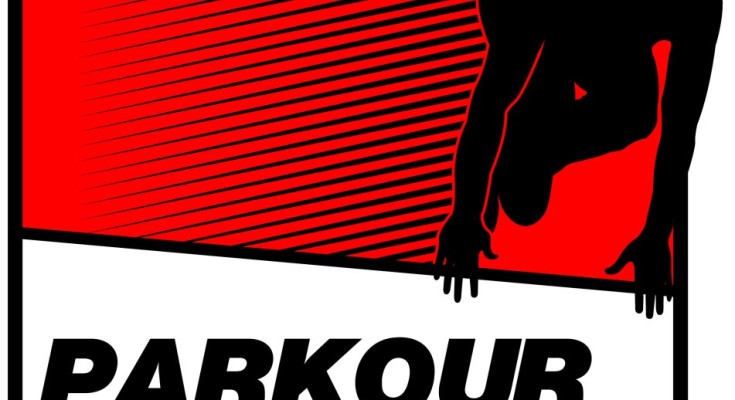 Parkour Jakarta: Survival of the Fittest

Parkour, the trend that has become a lifestyle, originated in France. Parkour (or PK, for short) is an activity of moving from one point to another as efficiently and quickly as possible, using principally the abilities of the human body. It is meant to help one overcome obstacles, which can be anything in the surrounding environment. No wonder this art of movement found its way to Indonesia, where obstacles are part and parcel of urban life. In the 2000s Parkour was one of the most viral and inspiring physical art forms worldwide. Parkour touched base in Jakarta around 2007, slowly developing into several regional sub-groups in other areas of Indonesia. Now, all over Indonesia dedicated communities practice the art of survival in a concrete jungle! 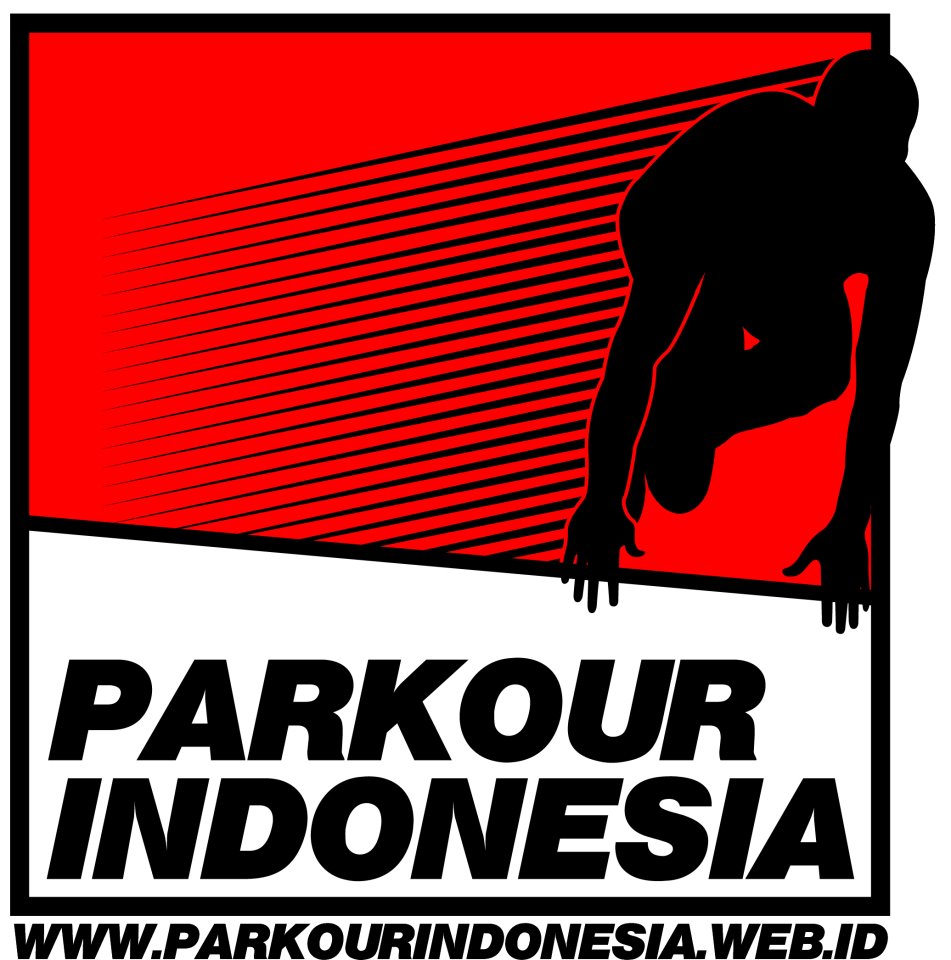 Parkour was introduced by David Belle, a Frenchman who shared ideas and conversations with his father. David’s father, Raymond Belle practiced parkour as a survival training during his military camp days in Vietnam. David soon became curious in exploiting this so-called training his father referred to as “le parcours.” Parkour was officially established as a movement by David and others under the name Yamakasi. Yamakasi released their first movie under the same title in 2001 and soon grabbed worldwide attention. In this fast-moving survival method, the males are called “traceurs” while the females are “traceuses.”

After the release of the movie, many people began exploring this unique way of movement. In Indonesia, the Parkour community took shape in 2007. In 2005, seven Indonesians decided to form a community through an online forum named Parkour.net. By mid 2007, these individuals agreed to establish Parkour Indonesia to gather all Parkour practitioners in Indonesia. Soon after, regional sub-groups began to be formed in many cities in Indonesia, such as Jakarta, Bandung, Semarang, Yogyakarta, Solo, Malang, Surabaya, Samarinda, Bali, Palembang, Medan, Makassar, etc. I had the chance to see one of those sub-groups in action, which is Parkour Jakarta, and have a chat with Pakour Jakarta’s Chief, Niki.

As mentioned before, Parkour is a survival method. It is not an organized sport, or as Niki claims, not a form of sport at all. It has no special rules or regulations. Parkour practitioners strongly oppose to any kind of competition as you find so often in sports. The most important thing in Parkour is that you have to understand your physical boundaries, aspects of safety and never push yourself beyond your limits. Even so, there are some basic moves such as running, jumping, balancing, climbing and rolling. Parkour does not require any special gear or clothing; Somersaults and back flips as you see in many videos are additional moves and in no way mandatory.

For those who are interested in participating or joining Parkour Jakarta, attend the weekly training every Sunday at 09.00 AM – 12.00 PM in the Taman Kridaloka at the Gelora Bung Karno, Jakarta. Beginners fear not, as experienced Parkour trainers will supervise and explain how things work. If you wish to be a registered member, you have to frequently attend the trainings during a year, fill out a form, have two referrals from a friend and a Parkour Jakarta management member, and last but not least, fully show your commitment to this form of art.

Parkour sometimes is a balancing act, By: Ario Triwibowo

Until this date, there are 47 registered members at Parkour Jakarta. Parkour does not discriminate, as they both have male and female members and participants of various ages. One of members for example, was only 5 years old! This also applies to your nationality. If you are a non-Indonesian, feel free to join Parkour Jakarta.  At times people from England, Germany, Algeria and Brazil join the training.

During training, don’t expect to instantly see and do any of the extreme moves seen in the videos or movies. As this training is also aimed at beginners, first the basic moves are taught, such as running, jumping (and landing) properly, rolling and balancing. Repeating these basic moves is equally as essential for beginners as for experts. 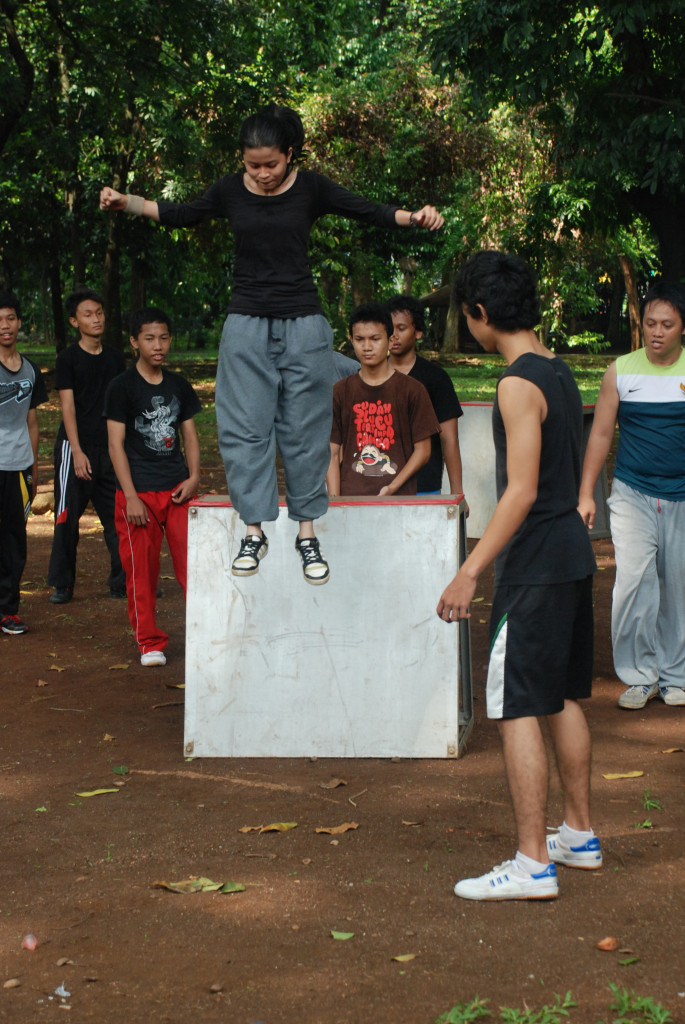 The basics, essential for pros and beginners, By: Ario Triwibowo

Normally, Parkour Jakarta trains at the Taman Kridaloka, but sometimes they practice their moves in other places in Jakarta, such as Taman Menteng,  Tanjung Priok, Cinere, and Kota Tua. Speaking about using public locations, I ask Niki about their experiences using such public venues in the concrete jungle of Jakarta. “Yes, as you can guess, we stumbled upon some restrictions on some occassions. Usually there are security guards telling us that we are not allowed to practice Parkour there. We respect that, as it is their right to forbid us to go there,” he explains. Aside from their weekly training routine, they also have two important annual events : the Jamming Nasional and the Urban Fest. At Jamming Nasional, Parkour groups from all over Indonesia gather for a joint training. Its location changes from year to year. Urban Fest is an art and music festival held annually in Ancol, Jakarta. Parkour Jakarta is invited every year to perform.

After seeing Parkour Jakarta train for 3 hours straight, I asked Niki about his expectations for Parkour especially in Jakarta and Indonesia. “I expect that we will have more participants and these participants will understand the true meaning of Parkour. Because some people think that Parkour is nothing more than running around doing back flips in public view without any purpose at all, which is wrong. Parkour has a meaning, it is a survival method either to help yourself or others. For beginners, I don’t think I can give any other advice other than not to rush in wanting to do the extreme, and never get bored in training or practicing.”

For some inpsiration, take a look at this video from Jakarta traceur Ronal!