Forty years ago, Muoy You’s pursuit of a quality education in France saved her life. Today, she wants to give the same educational opportunity to young Cambodians. 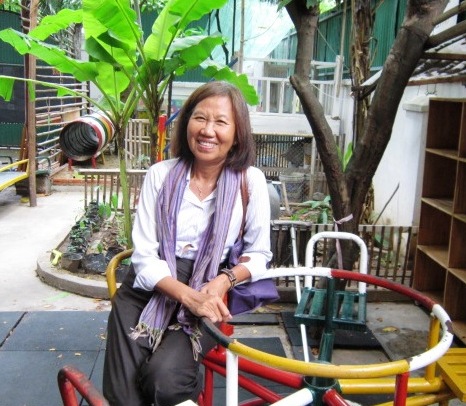 In 1972, she received a scholarship to study overseas. She never dreamed it would be 31 years before she returned home to Cambodia.

Unbeknownst to the enthusiastic young woman at the time, her education probably saved her life. The journey to France took place while tables were turning in her home country and, exactly two years and five months after her departure, the Khmer Rouge marched into Cambodia, evacuating thousands and tearing the country apart. From her apartment in Paris, Muoy watched it on TV, powerless to connect with the family she’d left behind and unable to return to her home.

After decades of searching, waiting and reuniting with lost family members, Muoy returned in 2003 and opened Seametrey Children’s Village in Phnom Penh as a way of giving back to the country which, she felt, now needed her help.

“Everybody wants to leave their mark on this earth,” she said. “And I have always wanted to do something in Cambodia. If I were younger, I’d go into politics but now I want to provide education that will bring change to this country.”

Raised by a father who repaired bicycles on the side of the road and a mother who sold coffee in Phnom Penh, Muoy was inspired by books provided by her free government education.

Reading opened my mind and made me dream of seeing beyond my limited horizon.”

What began as a three-year scholarship to France turned into five years in the country, followed by jobs in Sudan and the Ivory Coast where she taught French and got married. Constantly watching the situation in Cambodia, she planned to return in 1975 but was prevented from travelling since she was then pregnant.

“Again, I feel my life was saved,” said Muoy. “This time it was saved by my oldest child since my pregnancy made me unable to travel and I only discovered later that it was unsafe to be in the country. Two of my friends were in Cambodia at the time – one died and the other lost a child to the Khmer Rouge regime.”

Still unable to locate her family, Muoy watched and waited in hope. In May 1980, a letter arrived. It was from one of her sisters and had travelled from France to Sudan to the Ivory Coast, taking three months to reach her. In it, Muoy read that most of her family had died and that her sister was living in the Khao I Dang refugee camp in Thailand.

“My feeling was disbelief, like in a nightmare, and then a big void opened inside me that remains to this day,” said Muoy. “It makes me emotional every time I talk about Cambodia.”

In 1997, Muoy retired from teaching and focused on her dream of creating a school in Cambodia. She returned for a short while but, once again, had to leave because of unrest and returned to France where her children finished school.

When she finally moved back in 2003, she rented a house for the school, hired teachers and waited. No children showed up.

“Seametrey was designed to be a school for both rich and poor,” said Muoy. “But poor families were very conservative who didn’t see us as a traditional school and rich families wanted to send their kids to established schools and not mingle with poor kids. So, nobody wanted to come to my school”.

Seametrey presently provides an education for 92 children, many of whom are too poor to pay for schooling

Eventually, a friend mobilized the neighbourhood and eight children enrolled. After three months, they began speaking English, which impressed their families, and children started filtering through the door.

“We weren’t charging them anything for schooling and the challenges were more than I expected,” said Muoy. “Every month there was money going down the drain and I was scared.”

After a few months, Muoy and her late husband scraped together their funds, bought a small house and converted it into a rustic school with bamboo fences and an apartment on top floor where they lived. Later, they bought the house next door, turned it into a guesthouse and finally started to break even.

Stay at You Khin House to come full circle too...

“My goal is to provide quality education for all Cambodian kids,” said Muoy. “Most of the aid organizations want to empower the poor but I feel that’s not enough.  I also want to educate rich kids since upper classes are usually the ones who make the laws and they, too, need to receive a good education.”

Seametrey presently provides an education for 92 children, many of whom are too poor to pay for schooling (like the son of Muoy’s coconut seller and the daughter of her tuktuk driver).

However, her lease expires in 2013 and she cannot afford to keep the school in its same location. Since she owns a plot of land in Tonle Bati ((30km south of Phnom Penh), her dream is to build a school to provide education for 1,000 kids from all over Cambodia.

This week, she launched a fundraising campaign through Indiegogo and needs to raise $15,000 to clear the land and build a nursery and primary school.

“I want to provide education that will bring change to my country,” she said. “I want to groom future leaders so that, in 20 years time, they will be able to change the face of this country.

“I want to pass on my own legacy to children in Cambodia so they are able to realize their own opportunities and dreams.”