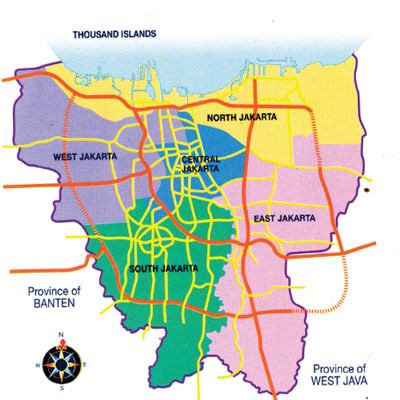 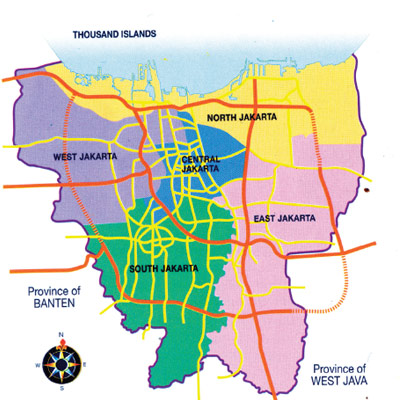 A map of jakarta, with in the northwest Pulau Seribu

Jakarta is both a city and a geographical region. In reality, there are five cities or municipalities in Jakarta, each with its own unique character and trademarks.

South Jakarta is famous for its hip and upbeat ambience. Many shopping malls, nightclubs and restaurants can be found here. Major business districts, such as Sudirman and Kuningan where offices and skyscrapers rise up into the smoggy sky line the streets. Shopping Malls are concentrated in Senayan (Plaza Senayan, Senayan City and FX Plaza) and Blok M (Blok M Plaza and Pasaraya). There are also a few malls in the lower part of South Jakarta, in Pondok Indah (Pondok Indah Mall) and Cilandak (Cilandak Town Square). The Kemang area is best known for its nightlife with numerous bars and clubs throughout the area. If you want to get a taste of true Jakarta culture, you can visit the Setu Babakan village where the Betawi heritage is kept alive.

the local government runs the administration of the city from Central Jakarta. This part of the city is mostly known for the many governmental offices, including the Presidential Palace. Many museums and famous landmarks can also be found in Central Jakarta, such as the National Museum, the National Monument (Monas), the Istiqlal Mosque, and the Cathedral. Backpackers usually end up in the infamous Jalan Jaksa. Cheap accommodation, bars, internet cafes and restaurants abound and, within walking distance of the main train station Gambir, Jalan Jaksa is a strategic place to stay.

West Jakarta is dubbed the city’s Chinatown. Chinese presence and businesses give this part of the city a different ambience, especially the Mangga Dua and Glodok area. West Jakarta is also the center of Jakarta’s Old Town, which is a district left with many historical buildings from the Old Dutch architecture.

North Jakarta is home to the harbor, where large containers ships carrying goods come and go every day. The harbor has been in existence since the colonial area, as best seen in the historical harbor site of Sunda Kelapa. The most notable area is the Ancol Bay City, where the city’s amusement park, Ancol Dreamland is located. Since North Jakarta is located adjacent to the sea, it is no wonder that the fish market is located here. The Muara Angke Fish Market sells the catch of the day. If you’d rather eat than cook from raw, no need to worry because there are countless seafood restaurant in this part of the city.

East Jakarta is located beside the suburban city of Bekasi in West Java. Both East Jakarta and Bekasi is recognized as industrial areas with many factories and production facilities. East Jakarta is also a center for traditional markets selling basic food ingredients such as vegetables, meats, fruits, spices and so on. The Beautiful Indonesia Miniature Park or Taman Mini Indonesia Indah is located in Cipayung. It is a cultural park where people can see the diversity of the Indonesian culture in one single park.

Kepulauan Seribu (the thousand islands) is a group of islands (not a thousand) spread in the waters of northern Jakarta.  Administratively, Kepulauan Seribu still belongs to the Jakarta province. It offers Jakarta’s busy inhabitants with a quick escape route to paradise beach life. Kepulauan Seribu is accessible by boats leaving from Ancol or Muara Angke in North Jakarta.

Jakarta is a city made up by millions of migrants and visitors who each bring their culture and tastes to the sprawling city. As a multicultural city, you can explore these different views, tastes and styles in every part of Jakarta. The cultural diversity of Jakarta parallels the modernity of a metropolis, with something for everyone. The difficulty lies in finding out where its at. Read our Jakarta insider tips for the best things to see, do and eat!