By the 1920s, the “civilized world” began to be intrigued by a beautiful, mysterious island called Bali. The following decade, films, books and photographs by Europeans and North Americans gave glimpses of “the last paradise.” Since then, Bali has hosted millions of travelers from all over the globe. Not long after the latest bombing in 2005 (first in 2002), Bali has reclaimed its place as one of Southeast Asia’s top tourist destinations.

One of Indonesia’s provinces, Bali is in the westernmost end of the Lesser Sunda Islands, a string of islands known for their mesmerizing beaches and mountainous topography. Bali is the only Hinduist island in the predominantly Islamic archipelago. Despite being one the group’s biggest islands, one can drive around Bali’s entire coast in a day. That, however, is not recommended. You should enjoy each of Bali’s different charms with leisure. 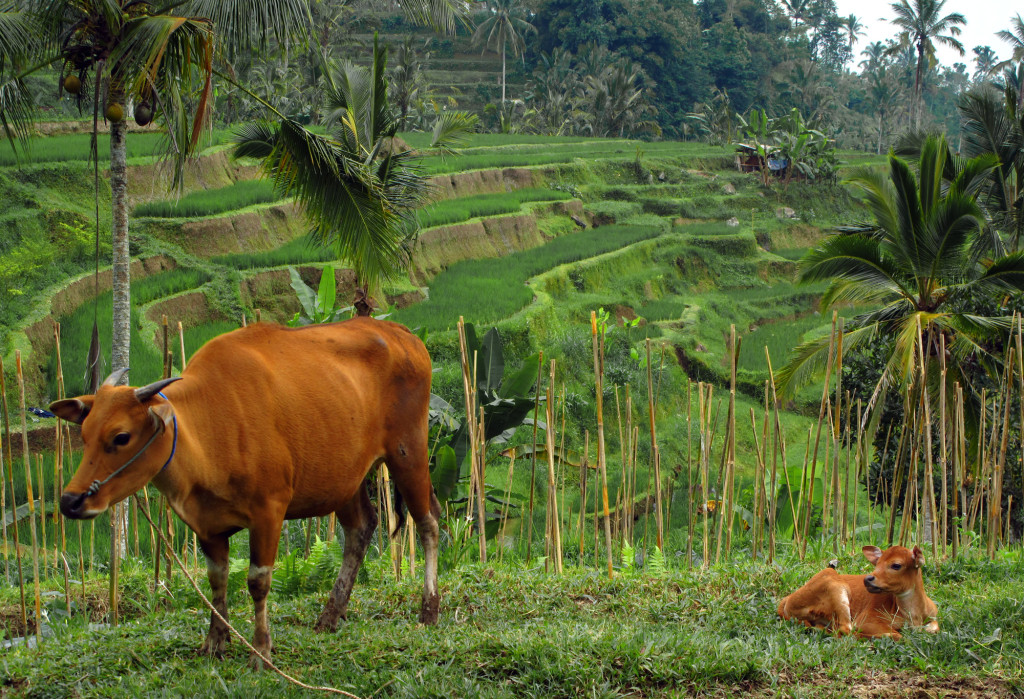 Beautiful rice paddies (and cows) near Tabanan, By: Dalih Sembiring

The Island of the Gods has black sand beaches on the east, north and west coasts, whereas the white sand beaches can be found around the Bukit Peninsula at the island’s southern end, in Sanur, around Nusa Lembongan Island as well as a few places on the east coast, such as Candi Dasa and Padangbai. The beaches in and near Kuta, despite having white sand, can have many colors when they are littered with rubbish, and are usually very crowded in the afternoon.

Nusa Lembongan is also famous among divers. Other sites to check out for their underwater beauty are Menjangan Island, Tulamben, Amed, Gili Topekong and Padangbai. With great waves to ride, beaches of Kuta, Padang Padang, Uluwatu and Balangan are among surfers’ favorites.

When in Kuta, join the intense nightlife scene at its bars and clubs. The ones in Legian and Seminyak, just a bit north, are the places to go for a more posh, although not less-energetic, partying atmosphere. Further up along the same coast is Bali’s cultural icon: the Tanah Lot Temple. Sitting on a large offshore rock, the temple is well-known among photographers for its dramatic sillhouette during sunset.

Bali is also a surfers paradise, By: Wisnu Leonardus

Head inland to dicover Bali’s world-famous terraced-paddies surrounding traditional houses, rivers flowing at the bottom of verdant ravines, and elaborate shrines standing next to natural springs. You can discover all these in Ubud, town of the artisans, home to some of the island’s best food. About an hour drive from Bali’s capital, Denpasar, to the north, Ubud has temples that regularly stage dance-and-music shows.

Ubud is perched on the slopes that lead up to the island’s mountains. On the north-east, Mount Agung stands as Bali’s highest mountain. The island’s biggest and most important complex of temples, the Mother Temple of Besakih, is located on its western slopes.

In Kintamani, at the foot of Mount Batur, is a lake of the same name. Trunyan Village, located on the lake’s edge only accessible by boat, is inhabited by some of the Bali Aga, descendants of the original Balinese. What makes this village unique is that, unlike most Balinese, the people do not cremate or bury their dead, but leave them out in bamboo cages to decompose. The corpses’ stench, however, is neutralized by the strong perfumed scents from a huge Taru Menyan tree growing in the cemetery. 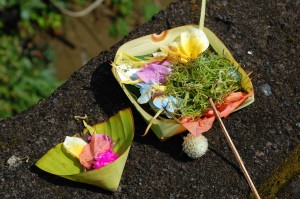 For those who has enough time, exploring Bali’s charms means counting the colorful canangsari offerings the Balinese put in their temples, around their houses and at every curve of the streets on a daily basis — it promises a neverending discovery. Be it a leisurely walk in the rice fields, a hunt for some paintings or sculptures, or a long drive to locate a hidden beach, you are sure to come across much more along the way.

Getting to and around in Bali

Bali is easily reachable through its international airport Ngurah Rai near Denpasar and Kuta. If you are traveling within South East Asia there are many low cost carriers with daily flights to Bali. Compare prices from all major airlines with our ticket booking system on the right side of the screen.

Getting around in Bali is not really a challenge, as every single inhabitant of the island seems to lead a double life as a driver. ‘Transport, transport?’ is their birdcall. If you wish to explore Bali, we strongly recommend Perama Bus Tours and Travel, that offers cheap shuttle busses to all major destinations in Bali and several overnight trips. You can check their schedule and book tickets on the right side of the screen.