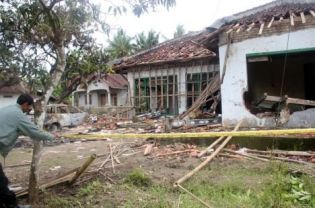 Attack on Ahmadiyya, How Unity in Diversity takes a Fall

On the sixth of February, the slogan of Indonesia Bhinneka Tunggal Ika (Unity in Diversity) took a fall. On that Sunday morning, thousands of people most of them locals and/or members of groups known as Muslim hard-liners, flooded the area of Cikeusik, Banten and launched attacks against the followers of Ahmadiyya. Three people died as a result.

Policeman outside Ahmadiyya cleric Suparman's house after the attacks, By: Antara

A day later, a group of people dressed in black gathered on the side of the road right across the Indonesia Presidential Palace and the Hotel Indonesia in Jakarta. The Black Monday, that’s how some people refer to it. Their intention could not have been clearer: to contest our conscience of the recent Cikeusik Tragedy.

The religious Islamic community Ahmadiyya, was founded in India near the end of the 19th century, by Mirza Ghulam Ahmad and has been heavily criticized and marginalized for decades in several countries. Not only in Indonesia, but also in Pakistan and Bangladesh Ahmadi’s have met with resistance, violence and discrimination.

The reason is that, even though Ahmadiyya calls itself an Islamic community, by many mainstream Muslim groups, they are not accepted as proper Muslims. The differences lay in the prophethood of Ahmad as the promised Messiah and the recognition of the death and return of Jesus. In mainstream Islam, the concept of Muhammad as the last prophet is one of the sacred values. Up until the late nineties, these differences were mostly talked about in theological discussions. While there was a fatwa against Ahmadiyya formalized in law, the majority of Indonesian Muslims could not care less about it. However, this has changed now.  The Cikesik tragedy was one of the ugly expressions of this change.

When the mob entered the property of Ahamdiyya’s member, there were only ten or so members in the house, making them an easy target. Not all could make a timely escape. Ahmadiyya members Roni, Tamo and Mulyadi became their prey, brutally beaten even after they had died.

Watching the YouTube version of the cruelty, one could not help but beginning to question ourselves. Where are those human values, that we have been taking pride in? High profile figures in the country started to voice their opinions, ranging from concern to condemnation. Most of them tended to blame the high religious intolerance in society lately. President SBY condemned the attack, but has not taken any action against violent hard-line groups in the country. 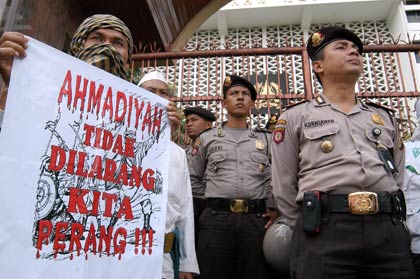 'If Ahmadiyya is not forbidden, we will go to war', By:Jakarta Post

Going back to the very fundamental question in this case: is religious intolerance really the culprit of all these mess? Violent acts in the name of religion can often be traced back to political and economic interests. The expansive growth of new religious interpretations is seen as a threat by many, and as an opportunity to destabilize the status quo by some.

Rumors go the attackers as well as the police were paid to launch the attacks and, in the case of the police, to not interfere. The brown envelopes given out are said to have contained as much as 300.000 Rp. (around 25 USD). There is no definite proof of the attackers and police being paid, but it is hard to ignore the great possibility of a well organized attack. Smses were sent to coordinate and video records also show that the attackers were wearing different color bands and ribbons on their chest.

Paying people to protest, vote or even attack others is certainly not a new phenomenon in Indonesia. It is one of the reasons that some election results are said to have literally been bought by bags of rice. It hollows out democracy and more importantly, it nullifies a shared respect for humanity.

On the other hand, Suparman–the Ahmadiyya cleric of Cikesik—was stated saying that holding on to Ahmadiyya is about ‘keeping my kitchen smokey’. This is an expression equal to saying ‘livelihood’. At the Police Office during the investigation, he mentioned that being an Ahmadiyya branch leader in Cikesik he is paid about US $ 1,100 a month. A startling figure, compared to the average income of Cikesik people at about US $ 50 per month.

Poverty is at the root of the problem. Despite government’s claim of declining statistics, poverty is real. It is strongly felt and overly visible. It is one premise that guarantees to produce people with a low tolerance-kind of mind set. It also makes it possible to buy people and stir up conflicts.

The development of religious interpretations among the poor, would certainly fuel the intolerance level further. Since the fall of the New Order regime and the birth of “Reformasi” in 1998, numerous ideologies have surfaced. This included the emergence of various different religious interpretations. The post-reformasi period has been marked by a tendency among many Muslims to hold a strongly textual view of religion. For those, there are no other colors but black and white. As a result,  they will label ‘others’ as enemies  to the extent of wiping out people with a different perspective.

Gayus Tambunan wearing his not so clever disguise, By: Indonesia Matters

Many Indonesians are fed up by the overwhelming number of paradoxes in law enforcement. The law in Indonesie works, at best, arbitrary. A poor old Grandma Minah was put in jail, for stealing three cacao fruits. This is in startling contrast with the case of Jefferson Suleiman, the Tomohon mayor, who was inaugurated into office despite being convicted for corruption. One of the most scandalous corruption cases was Gayus Tambunan, a junior level tax officer. He managed to embezzle 47 Milliard Rp. (6 Million USD) before being caught. He was convicted to just 8 years in prison. Apparently being on good terms with his guard, he seems to have exchanged some Rupiah for the keys of his cell and was recently spotted in Bali watching a tennis tournament with his wife, wearing a wig and glasses, not a very clever disguise as several people in the crowd instantly recognized him. While incarcerated, he also managed to sneak off to Macau, Kuala Lumpur and Singapore, accompanied by his wife.

These and other recent examples show that no matter how well the formal legal circles use rhetoric to justify their actions, they simply lost their credibility. Thus, many people will feel forced to create their own definition of justice and take matters into their own hands. The Cikeusik Tragedy could not have happened if the State’s law enforcement was strong and served its people. The fact of the matter is that the State is perceived to have failed at establishing justice in previous cases of religious conflicts.

Religious sentiment is only one expression of peoples’ dissatisfaction and uncertainty. Religion, for many Indonesians, has been providing a haven from day-to-day stress factors; An eternal truth and a definite path through a life filled with challenges. It is unfortunate that nowadays we are seeing more people adopting the ‘conservative’ interpretation of religion instead of the peaceful one. The combination of poverty and the government’s failure to protect its own people, is a recipe for a time bomb.

It is hard to even begin to comprehend the deaths of Rani, Tamo and Mulyadi. If there is any lesson that came out of this, it is probably more than timely to ask ourselves about our values and religious practices. With over 17.000 islands and 300 languages and cultures, Indonesia would do well to embrace differences, instead of fighting over them. What is perhaps the most ironic thing, is that the national anthem, Indonesia Raya, was written in 1927 by Wage Rudolph Supratman, an Ahmadi.