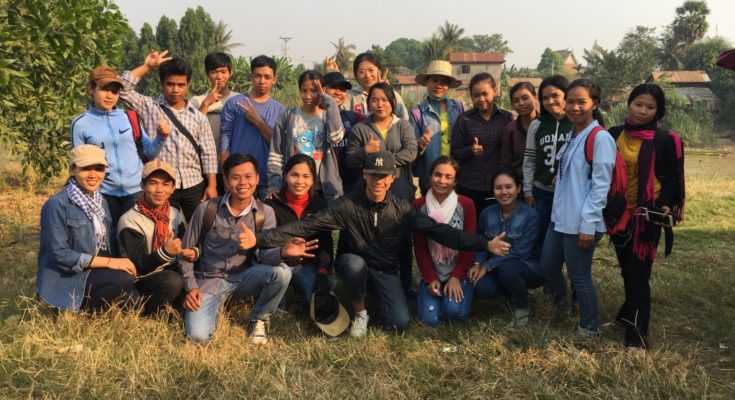 It’s become common practice for NGOs and environmental development agencies to use ‘influencers’ for the roll out of environmentally sustainable farming practices, but this isn’t always the most effective method, say social network analysts from the University of Sydney.

Published in the International Journal of Agricultural Sustainability, their research examined the role of social network brokers – well-connected individuals within a community – in the adoption of innovative farming practices in Battambang Province in North-Western Cambodia. The authors, Dr Petr Matous, Junjian Zhang and Associate Professor Daniel Tan found that less popular farmers were better influencers, compared to their more popular peers.

“Similar to marketers on social media, the international development industry and environment conservation organisations have become enamoured with the idea of leveraging local ‘influencers’ to deliver programs ranging from behavioural interventions, to the promotion of new technologies,” said Faculty of Engineering academic and environmental and humanitarian engineer, Dr Petr Matous.

“External organisations often don’t have the capacity to support every single farmer in a village and show them how a new technology works. Instead, they often select several ‘model farmers’, who they choose based on whether they are community leaders or regularly offer advice,” he said.

“They then give these ‘popular’ and seemingly influential farmers new technologies in the hope they will adopt them and disseminate the knowledge or technology around the village using their social networks.

The researchers found that providing less popular farmers with new information and technologies was more likely to result in a wider community adoption of sustainable farming practices.

“Farmers who move between diverse sub-communities and were more open-minded were the most receptive to the early adoption of the recommended farming practices such as crop rotation or drip irrigation and they are not the same group as the most ‘popular’ farmers,” said Dr Matous.

“This might be the case because popular farmers may be reluctant or tired of being repeatedly used by external agencies. Whether in Cambodia or anywhere else, the fact that someone is locally prominent does not necessarily mean that they are interested in new environmental or resource-conserving practices.

“The findings suggest that we should not excessively rely only on the handful of prominent farmers in the hope that new technologies will magically trickle down from them to others, who are often their competitors. To tackle environmental degradation and looming food insecurity, we need to better engage larger sections of the communities.”

To combat this, since 2017, University of Sydney researchers have been working with Battambang farmers to diversify their crops and adopt practices that will better sustain their livelihoods and the local environment.

“One practice we have worked to implement is crop rotation: alternately planting different crops on the same land in between rice growing seasons, for example, mungbean, watermelon, rice and cucumber,” said Associate Professor Daniel Tan from Sydney Institute of Agriculture and the Faculty of Science.

“This practice ensures that organic matter in the soil is preserved, which improves soil structure and nutrient content, and prevents soil erosion. It also allows the producers to gain additional income in between rice harvest when their fields would be otherwise unused,” said PhD student and the study’s lead author, Junjian Zhang.

“Another practice that we studied and promoted was drip irrigation: a low-cost system of small perforated hoses laid between crops that bring water to the root zone, with minimal loss by evaporation and surface run off,” he said.

HOW THE ANALYSIS WORKED:

As a part of a long-term engagement in North-Western Cambodia, the study’s lead researchers conducted a social network analysis in the village of Battambang, using interviews and a detailed questionnaire that asked farmers to provide details about their social network, including questions such as, “who do you go to for farming advice?”. The quantitative part of the data was analysed with network science tools and graph theory.

There are no conflicts of interest to declare. The research was funded by the Australian Centre for International Agricultural Research.