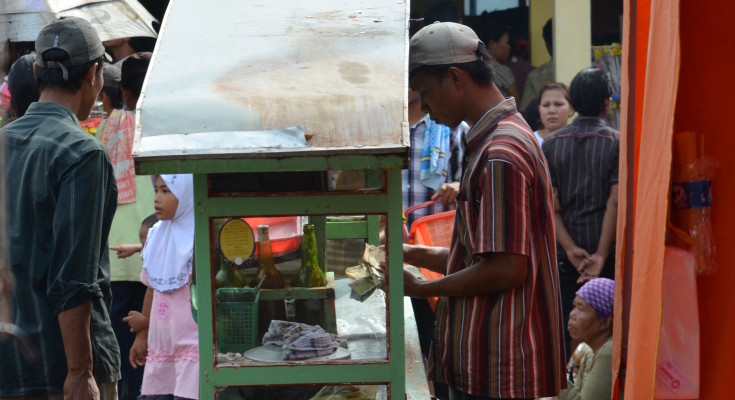 Have the Guts to Eat from the Street 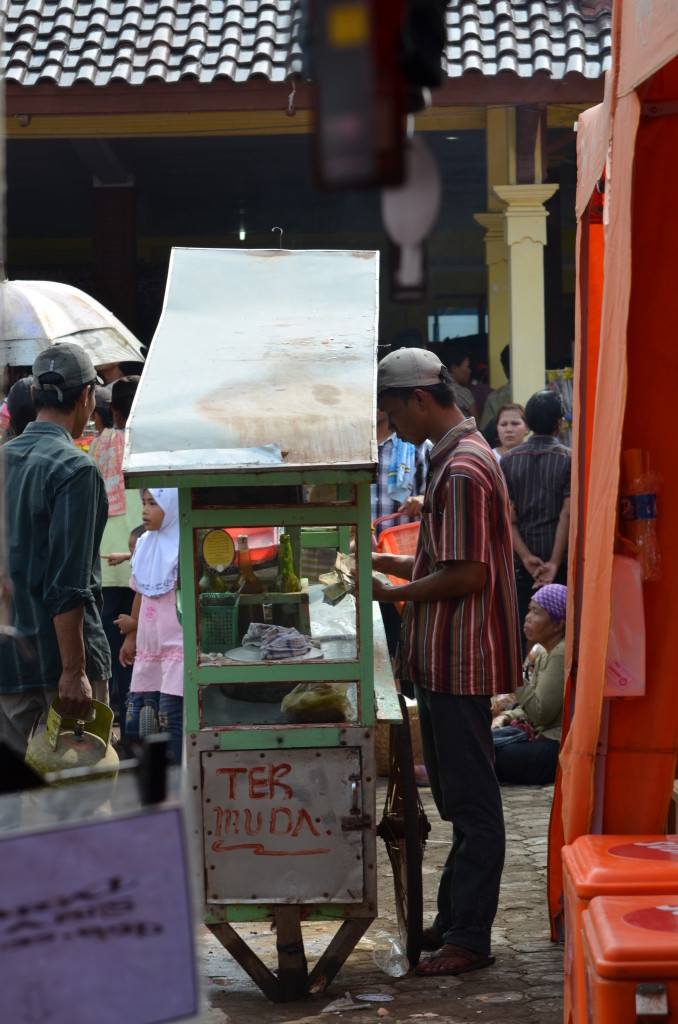 A typical streetfood cart 'kaki lima'-5 legs, 3 on the cart, two on the owner

The ones that do boast about late-night haunts, one-of-a-kind stalls and meals so good you’d sell your mother for another bite.

The ones that don’t eat street food are, well…forgettable. If the fact that you might get sick stops you from doing anything—eating, travelling, enjoying life— your sense of adventure is the least of your worries.

Sure there’s no air conditioning and sometimes the rats get a little too close to your toes. But it’s not an adventure worth telling if there aren’t any dragons. And that’s the most beautiful thing about Jakarta, one night you can eat a plate of nasi campur for 88 cents under some tawny single-bulb tent decorated with nothing but blue plastic stools and the next night, if you’re wallet is up to it you can head over to Hotel Kempinski’s Casa D’Oro complete with linen table cloths and a seven course degustation menu and then stare down a jaw-dropping bill at the end of the night. It’s your call.

For most of Jakarta’s expats, eating street food is something close to college hazing. 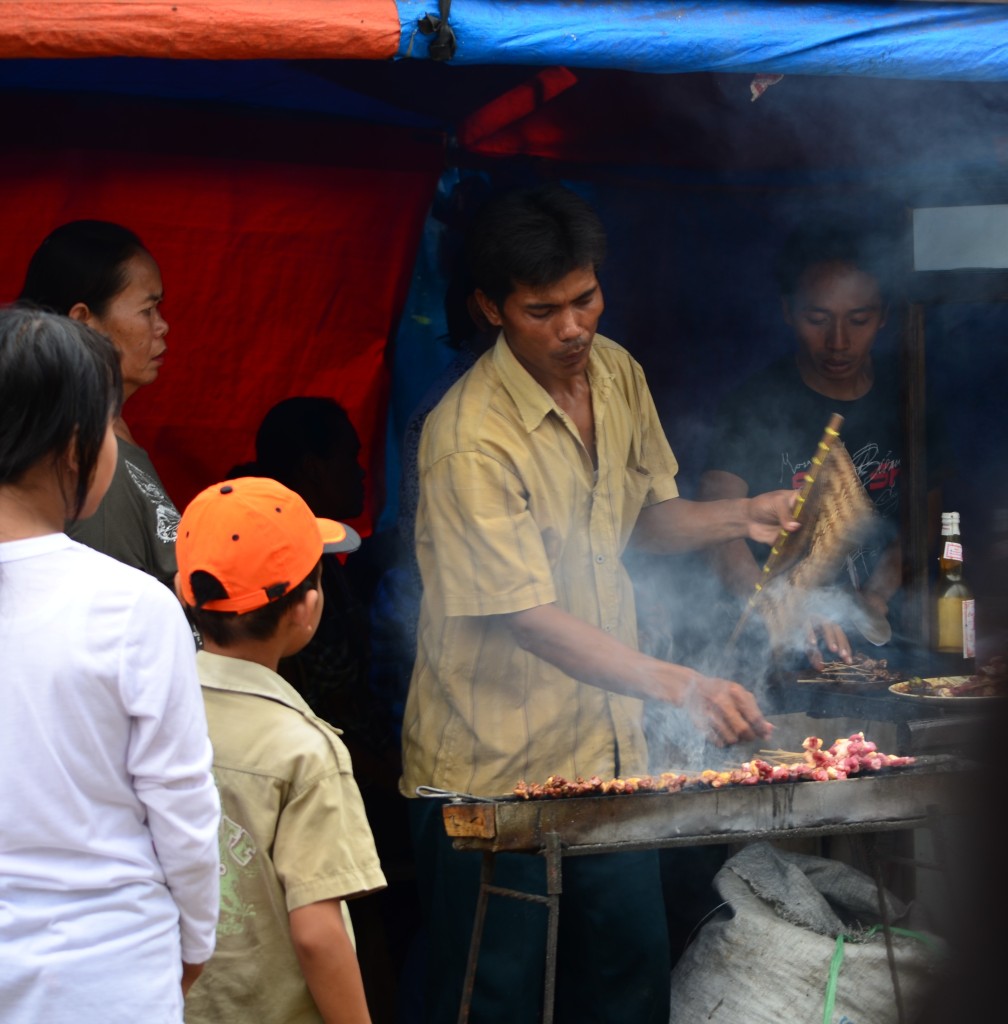 Waiting in line for satay

“When I first moved here I would drive by the little carts and food stalls with my dad and he would point and say ‘Don’t eat there. Don’t do it,” says Buster Weathers, an American musician living and working in Jakarta. “But like most expats you’re kind of forced into eating in these places when you’re eating with your Indonesian friends. You don’t want to be labelled a wimp.”

When Buster first came to Jakarta he lived on IndoMie and mall food. Then after a month and a half, Buster lost his street-food virginity.

“I was crying at one point. It felt like I was pregnant with a gremlin. It would come in waves. For 10 minutes I was fine and then up next would be another 10 minutes of pure hell. I don’t think I’ve ever been in that much pain.”

The story could be one of delectable culinary discovery or one of great gut-wrenching sickness that kept you up all night and into the next day. The delectable discovery gives you street credit when you take out-of-towners on a tour of your town and the night of hugging the toilet can be worn like a badge of courage the next time the subject of street food comes up over cocktails. Jakarta’s street food dragons are the tales of near-death experiences that come with venturing into the abyss. You never know what’s going to come with walking up to a random food stall. All you can say for certain is that you’re going to walk away with a great story. 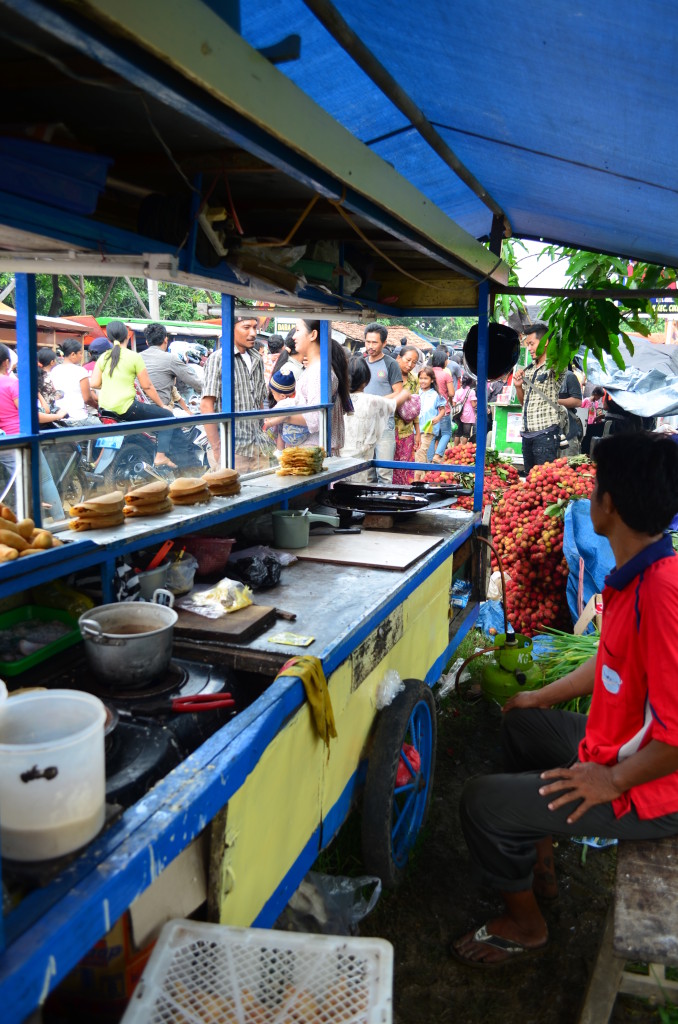 Martabak, sweet, 110% fattening cake with the condiment of your choice: condensed milk, cheese, chocolate or banana (or all)

“I was literally telling someone just the other day about how you know it’s a good one when your hands are up against the wall,” says Elliot Rossbach, who spent three years in Jakarta before moving back to the US for graduate school. “After living in Jakarta for a month I considered myself a country expert who had established substantial time punching the porcelain clock. I thought my stomach was ready for anything. Then one time I was in Kota with some local friends who wanted street food. When they asked me if I could stomach it I confidently told them ‘of course.’ I have no idea what I was eating but I piled on the cabe rawit and went home without acknowledging the unborn diarrhoea baby kicking like a pro baller inside me. He woke me up at 4:30 a.m. I have never, to this day, again had all four appendages pressed up against the wall in front of me while on the toilet.”

“Actually, only time I ever got sick in Indonesia was from eating in a mall,” says Katherine Yue, an American social enterprise consultant living in Jakarta. “I love street food. You just have to be careful about hygiene. My favourite place is a stall in Setiabudi, but I don’t want to tell you because I don’t want to go there the next time and not be able to find a seat. You can go to Setiabudi and find the best sizzling kangkung in a food stall. You’ll love it when you find it.”

You could spend the rest of your life visiting random food stalls around the city and still not even taste the tip of the iceberg. Entire books are dedicated Jakarta’s street food. Everyone has a recommendation and everyone has a story. People wear them like badges, as if knowing the best spot in town for kepiting saus padang gives you some street credit. 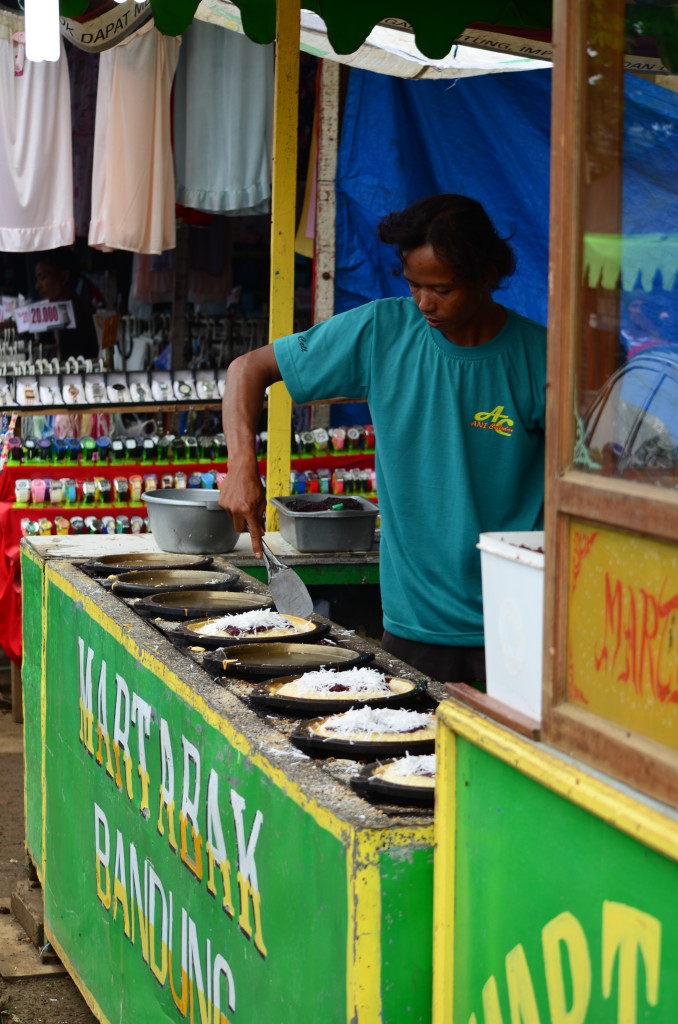 Martabak on the go, a favored snack for young and old

“There is definitely a badge of honour that comes with eating street food,” says Andrew Whitmarsh, author of a soon-to-be-published walker’s guidebook to Jakarta. “For those of us who do it, we like to rub it in the face of those that don’t because it makes us seem tough, in-the-know and adventurous. There is probably no greater sub-section of the expat community than English teachers in terms of those that live off of street food.”

But it’s not only being able to rattle off six or seven of the best spots in the city that gives you that validity. It’s the horror stories that come with getting sick off street food.

“I had only been in Jakarta for two weeks when I got food poisoning at a Western restaurant here in Jakarta. It was horrendous. So bad in fact that I didn’t feel like smoking for weeks after that, which eventually turned into months and now 7 years later, I still haven’t smoked. Thank God for my Jakarta food poisoning.”

“I have eaten a lot of street food though I usually try to get it to go as I don’t like the way they wash their dishes. It’s always so tasty and so cheap and from all those times, I only got food poisoning once, from martabak — unfortunately I’m so scarred from that martabak attack, I haven’t eaten it again since then.”

Whether you eat street food is your call. But the next time you’re standing around chit chatting over Chardonnay about traffic and maids take a minute to think about what it would be like to be able to tell an interesting story. Remember, in life there are two kinds of people, the ones who have stories and the ones who don’t.