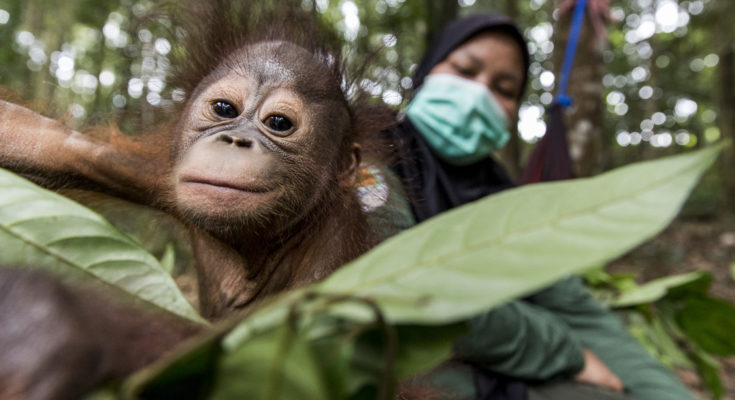 The coronavirus pandemic has the potential to wipe out the last populations of non-human apes, experts have warned. Already at the brink of extinction, for the critically endangered non-human apes this could be the last push to eradicate these species irretrievably. Orangutans, gorillas and chimpanzees, who share about 98% of human DNA, are so similar to humans that they have been used in pharmaceutical research. Now, this similarity could be fatal once more. The fact that COVID-19 can be deadly for humans leads scientists to fear it could prove lethal to great apes as well. Orangutans are particularly vulnerable to respiratory diseases in general, therefore COVID-19 could affect them even worse than us.

Eight of the remaining estimated 100,000 wild Bornean orangutans are currently attending a rehabilitation programme operated by the global animal welfare organisation FOUR PAWS. Rescued after their mothers had been killed they are now being raised at the FOUR PAWS FOREST SCHOOL in East Borneo in preparation to live in freedom once they have reached their maturity. Dr Signe Preuschoft, primatologist at FOUR PAWS, and her Indonesian team are extremely concerned about their little protégés. “After having already experienced so much suffering in their short lives, we want to ensure our orangutan orphans can grow up in safety until they are old enough to be released back into freedom. We are doing everything in our power to protect them from the coronavirus.“

As the number of coronavirus cases reported in Indonesia slowly rises, there is a risk that infected caregivers could pass on the virus to the orangutan orphans “At the ORANGUTAN FOREST SCHOOL, we do have a non-contact policy”, says Dr Preuschoft “So, no one enters the forest school who is not involved in the care and education of orangutan orphans. But of course, our orphans have body contact with their surrogate mothers from time to time. How often this occurs depends on the age of the apes. The older orangutans already live quite independently, finding their own food and staying high in the trees. Physical contact with their caregivers is rare. But the younger ones still need loving contact, clinging, cuddling and comforting when they are scared.”

The team, therefore, has taken precautions: Upon arrival at the forest school, all caregivers change into their uniforms and boots, uniforms get washed on-site and not taken home. They all wear a face mask whilst in the forest school. “We wash all purchased orangutan food twice, when it is delivered and before we give it to the orangutans. Importantly, to limit the spread of the virus, we have segregated the team into sub-groups of two to three people who always work together and do not interact with others. We do a lot of virtual education and information-sharing within our team so they adhere to strict personal hygiene and socially isolate themselves outside work as well”, emphasises Dr Preuschoft.

The forest school team has also stockpiled some food, and especially cleaning materials. However, some supplies are a problem. High safety mouth respirators (N95), laser thermometers and disinfectants are impossible to get at the moment in Indonesia. “Unfortunately, there is no one hundred percent protection. Children are usually not heavily affected by COVID-19 so, hopefully, this will also apply to our orangutan orphans”, says Dr Preuschoft.

FOUR PAWS is the global animal welfare organisation for animals under human influence, which reveals suffering, rescues animals in need and protects them. Founded in 1988 in Vienna by Heli Dungler, the organisation advocates for a world where humans treat animals with respect, empathy and understanding. FOUR PAWS’ sustainable campaigns and projects focus on companion animals including stray dogs and cats, farm animals and wild animals – such as bears, big cats, orangutans and elephants – kept in inappropriate conditions, as well as in disaster and conflict zones. With offices in Australia, Austria, Belgium, Bulgaria, Germany, Kosovo, the Netherlands, Switzerland, South Africa, Thailand, Ukraine, Hungary, the UK, the USA and Vietnam, as well as sanctuaries for rescued animals in twelve countries, FOUR PAWS provides rapid help and long-term solutions. www.four-paws.org