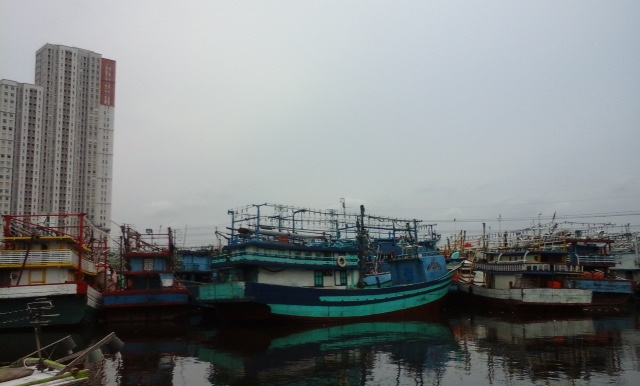 Fishing Village in a Metropolitan City

Jakarta is a place where there is a significant gap between the rich and the poor, where the two could look at each other and would wonder how they could live in a very different way of life. Started during the 60’s, Jakarta was brought by President Sukarno to become a magnificent symbol of powerful Indonesia. Massive developments were created in forms of concrete jungle, leaving alone spacious Gelora Bung Karno Stadium as the strength of that capital, showing off Indonesia’s preparation to win Asian Games.

Behind its hectic metropolitan image, Jakarta contains many rivers, alleys, and the coastal areas where slums can grow rapidly. Unlike rivers and alleys that are located in the heart of the city, coastal areas in northern part of Jakarta are more like village, fishing village. I have been to a fisher’s harbour in Muara Angke for my thesis research. Creepy is the first word that came across my mind while I arrived. One of my friends even warned me to take public vehicles with other females on the way home. I showed my friend from Denmark many pictures of the harbour and he exclaimed, “Here we call that place gravity.” The unpleasant smell from the pit and underdrain will force the newcomers to wear face mask next time they visit that place. If you want to look around, wear non leather or fabric shoes because it’s always flooded at some part of the main entrance of the harbour, making most of the fishers and fish trader wear boots during their activities.

There are many theses that bring up clandestine crimes and bandit practice in Muara Angke as their topic. Bulletins in many television reportages also often put dangerous chemicals in Muara Angke’s fish production on their headline news. Being around people that are carrying boxes contain with fish or other sea commodities, opening the boxes and arranging the products in a table to finally auctioning it will give you a blunt image of their working life. The traffic in the harbour happens 24 hours per day, meaning the harbour’s labour a.k.a coolie should always stand by the dock. The fishers will bring their caught in a ship, and the coolie will then transfer it for being auctioned, or directly to be processed in a factory or home industries. The fish should be kept away from dirt and sunshine to delay its deterioration process. Not only the fishers, labours, and traders, there are other people that contribute to take people from the harbour to the main gate, helping them avoiding permanent flood in some part of the harbour if they don’t bring boots. They usually use a bike and carriage/pedicab and you need to pay Rp 5000 to get a ride.

As I mentioned above, this place is more like a village than a city border. The main image we have about this location will soon vanish once you start talking to the people. I find it easy to talk to them and they are very welcoming to tell me about their life. Gotong Royong, Indonesian’s term for mutual assistance and solidarity is still being applied in this location, making you think that you are standing in somewhere far from Jakarta. Even if the place doesn’t look very appealing due to its lack of hygiene, seeing the ships in the end of the horizon with Pluit’s skyscraper in the background will bring a piece of inner peace.

“This Creepy Harbour Will Send You to Beautiful Islands”

Fortunately, this creepy harbour will bring you to beautiful islands; the only regency in Jakarta also known as Thousand Islands. In fact, fisher’s national organisation is located in Muara Angke, so Muara Angke also connects Thousand Island’s fishers with other fishers in other Jakarta’s fishing harbour like Kamal Muara, Tanjung Priok, and Muara Baru. If you are planning a holiday to Thousand Islands, you can go to Muara Angke first. There’s a gate near the harbour’s office that you can enter in order to get ship ticket. The economist and favourite ticket price is about Rp 35.000. You should come early to be able to join the ship because they only sail at 6 to 7 in the morning. This also works from Thousand Islands to Muara Angke, so you need to be ready in the morning in order to not miss the ship. You should first book for a holiday package, or at least doing a little research about the hotels and accommodation in the islands because you can only return home the day after you arrive. Just like its name, Thousand Islands are a chain of islands, meaning that there are lots of islands to explore. If you are craving for a beach vacation, these islands will cure your thirst.

Browse around this site

TAGFishermen fishing Jakarta saltwater
Previous Post The Macho Face of a Balinese Holy Day
Next Post How Extreme Can Food Be?