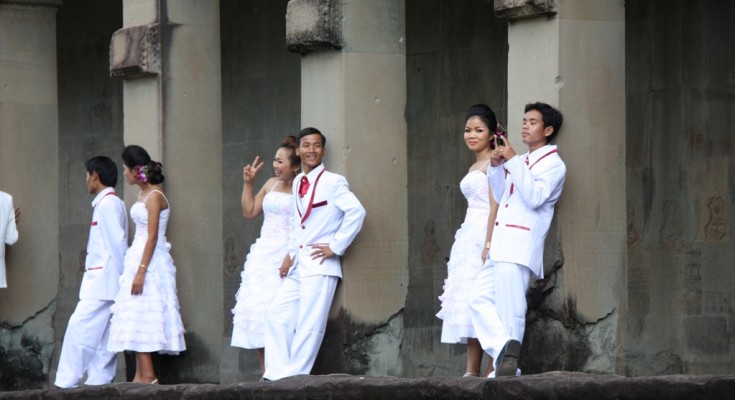 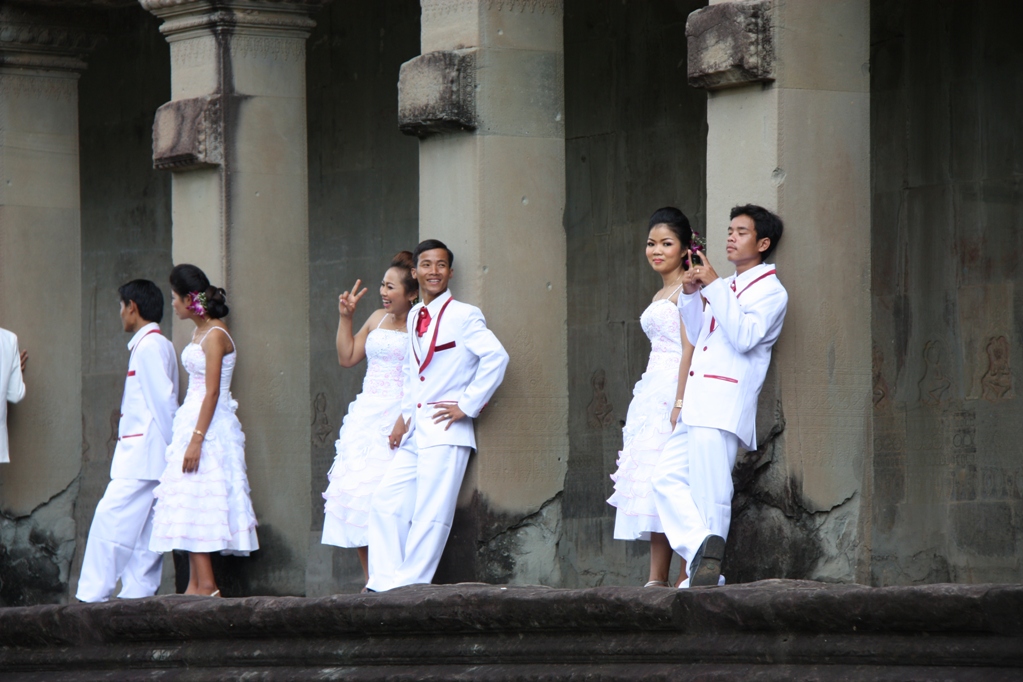 Getting married by the Angkor Wat, By: Willem van Gent

Our ―and most visitors’ ― first destination in Cambodia is Angkor Wat, the famous temple complex. It is advisable to buy a three day-ticket, because the temple grounds are very extensive and one day simply isn’t enough to take this place in. Most visitors stay in the town of Siem Reap, a lively place with international cuisine and colorful markets. Despite the many tourists, a pleasant atmosphere awaits you. In November you can enjoy the yearly water festival with boat races and music. 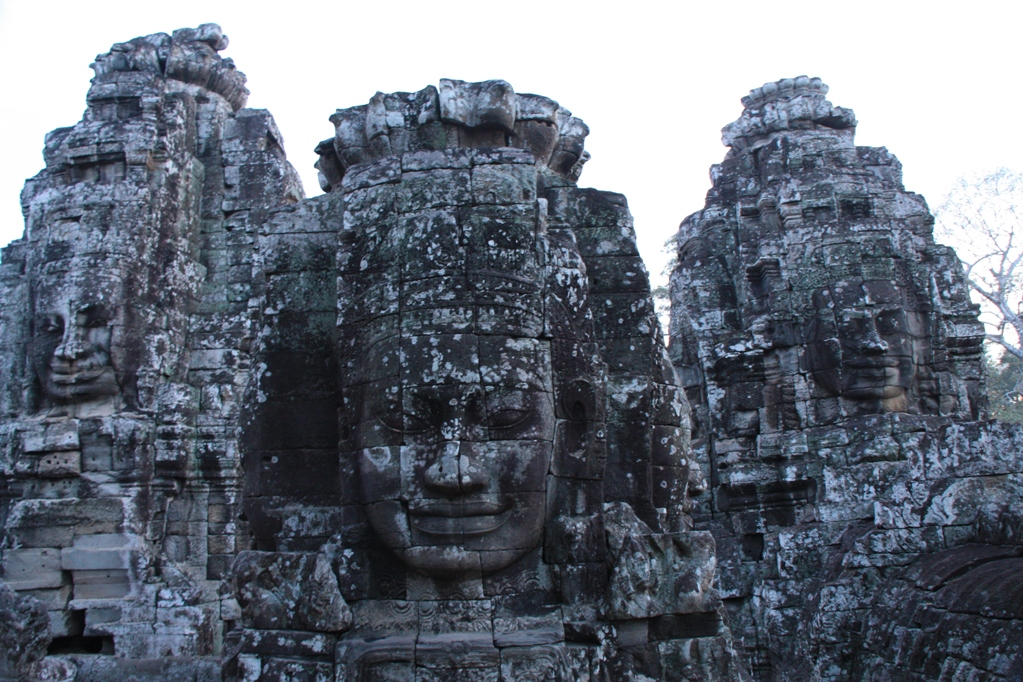 Some of the more than 200 heads carved on the Bayon Temple, By: Willem van Gent 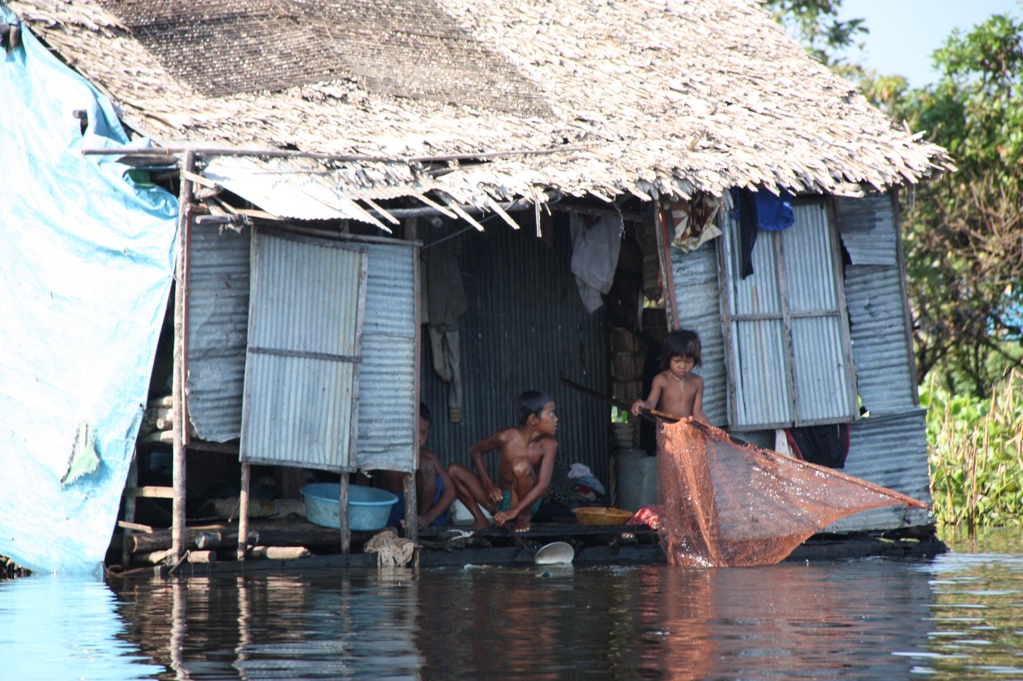 Living, working and playing on the water, By: Willem van Gent

There are several roads leading from Siem Reap to Battambang, the second largest town after the capital. By far the most attractive route is by water. We took a wonderful day trip over rivers and lakes with floating villages and farms along the way. Local people got in and out of the boat as we traveled.

Battambang, still a quiet town, is one of those cities that will grow on you. Once installed, you will discover the restaurants and cafés in the lively centre. Rent a tuktuk to explore the surroundings. There is a lot to see and experience in this town, cheerful sights such as the bamboo train and less cheerful ones, such as a temple where the Khmer Rouge took many people’s lives. If you can find him, choose the tuktuk driver who looks like Nelson Mandela, a friendly man who speaks English very well. He knows a lot about the history of the environment and also has a gripping personal story to tell about his own life under the Khmer Rouge. 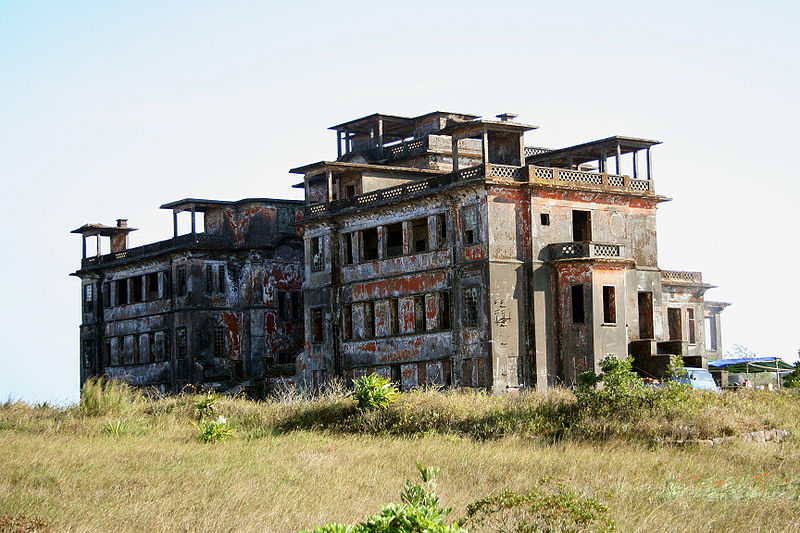 The Bokor Casino, By: Matt Connolley

A phenomenon not to be missed is Bokor Hill, near the rustic city of Kampot on the Tuk-Chhau River. After a trek through a dense jungle with local guides, you arrive at the top of the Bokor Mountain where the French, during their reign in Cambodia, built a large casino, a hotel and a church. 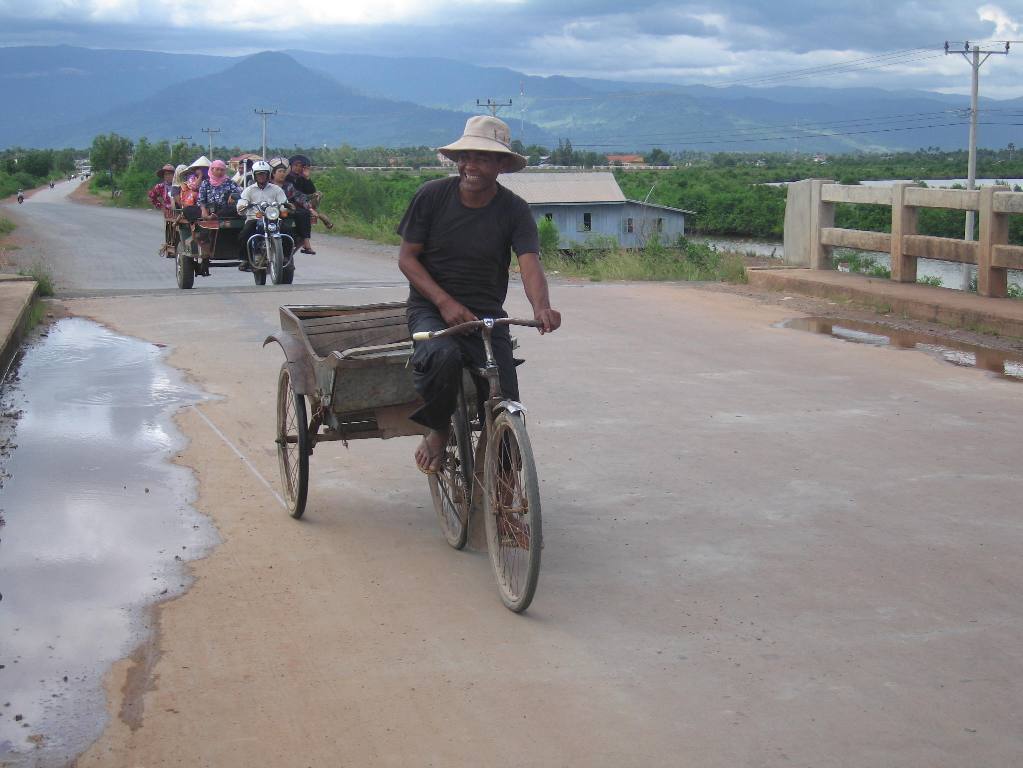 The mountain offers beautiful scenery as well as the remnants of a colonial past and a bloody recent history. There are still traces of the battles between the Khmer Rouge and the Vietnamese, who invaded Cambodia in December 1978 to eliminate the Khmer Rouge regime. The Vietnamese were shooting from the casino at the Khmer soldiers in the Catholic Church. The mountain is now property of investors who paid a hundred million dollars to the state. That money was used to finance an election campaign. The mega project includes amongst others a new sizeable casino, a five star hotel and luxurious apartments. Read more about Bokor Casino in Willy van Rooijen’s piece: Spirits of the Bokor mountain, Cambodia’s Mountaintop Casino

In addition to an eventful history, the surroundings of Kampot have a lot to offer for cycling enthusiasts. The quiet country roads are great for pedaling along the rice fields and villages where – in the afternoon – men gather to play jeu de boule, another French legacy. 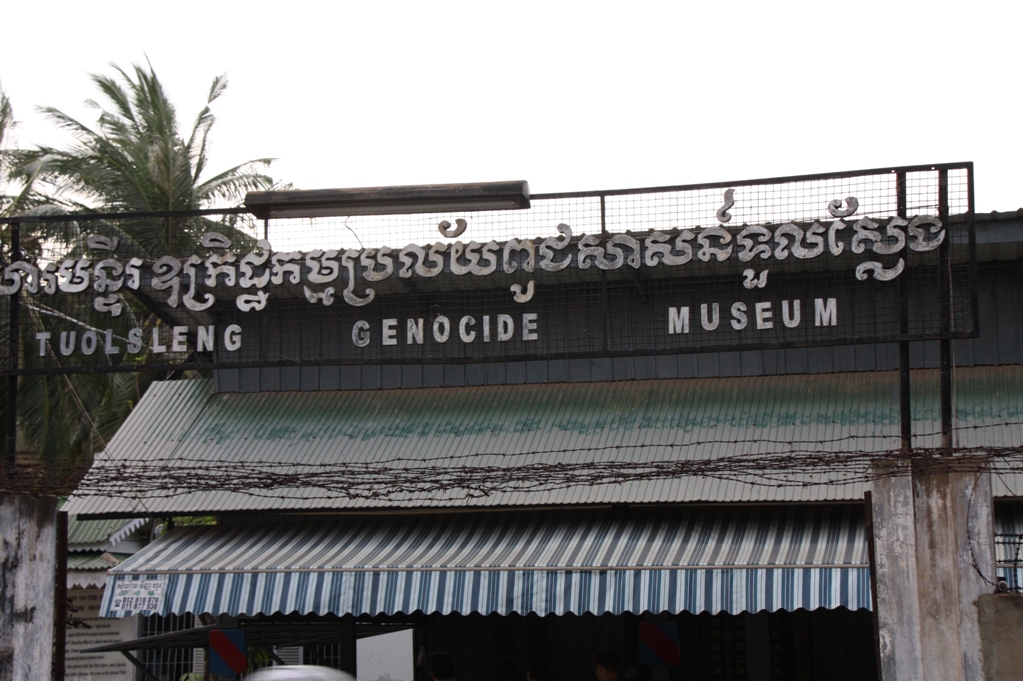 While in Laos The Plain of Jars will remind you of the heavy bombings of a foreign invader during the Vietnam War –  Phnom Penh is home to the symbols of the blackest pages in the history of Cambodia:  the Killing Fields and the Tuolsleng prison.

The Tuolsleng State prison is located in the middle of the city that during the Khmer Rouge regime was mostly abandoned. In 1975 the inhabitants of the capital were deported to the countryside, where they were re-educated and set to work as forced laborers in appalling conditions.

The prison is now a museum, where you find silent witnesses, photographed by their torturers, and small cells and iron beds with handcuffs that tell the story of a horrible past. 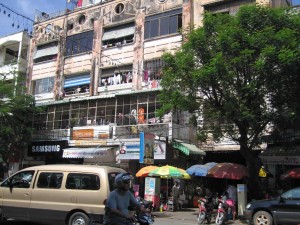 The busy streets of Phnom Penh, By: Willem van Gent

The streets of Phnom Penh are now lively with a broad boulevard along the Tonle Sap River. There is plenty of choice in hotels of all classes and a colorful street trade. You can enjoy the city on foot or hire a tuktuk. There is an abundance of restaurants with extensive menus and baguettes and croissants are a favorite breakfast/lunch accompaniment, yet another French legacy. An absolute must is the National Museum in the centre next to the Royal Palace, packed with ancient treasures from a glorious past. 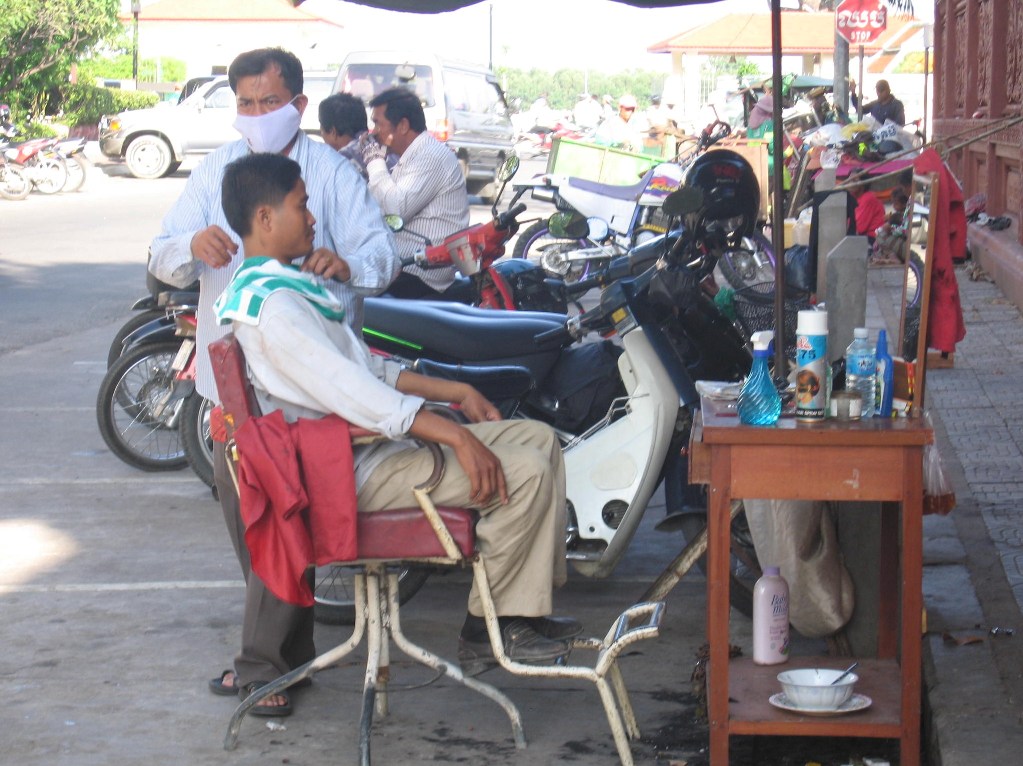 Getting a haircut in Phnom Penh, By: Willem van Gent

After a journey full of impressions and, because of the background of these countries, also full of emotions, you may want to unwind on Rabbit Island opposite the coastal town of Kep. Kep is a former French resort trying to revive tourism. But so far it remains a quiet place compared to the very touristic beaches of Sihanoukville. Kep has a great crab market and simple restaurants where you can enjoy fresh crab with green Kampot peppers.

On Rabbit Island – half an hour sailing from Kep – you can stay in simple huts on stilts and enjoy a swim in the ocean and have a relaxing massage on the beach. 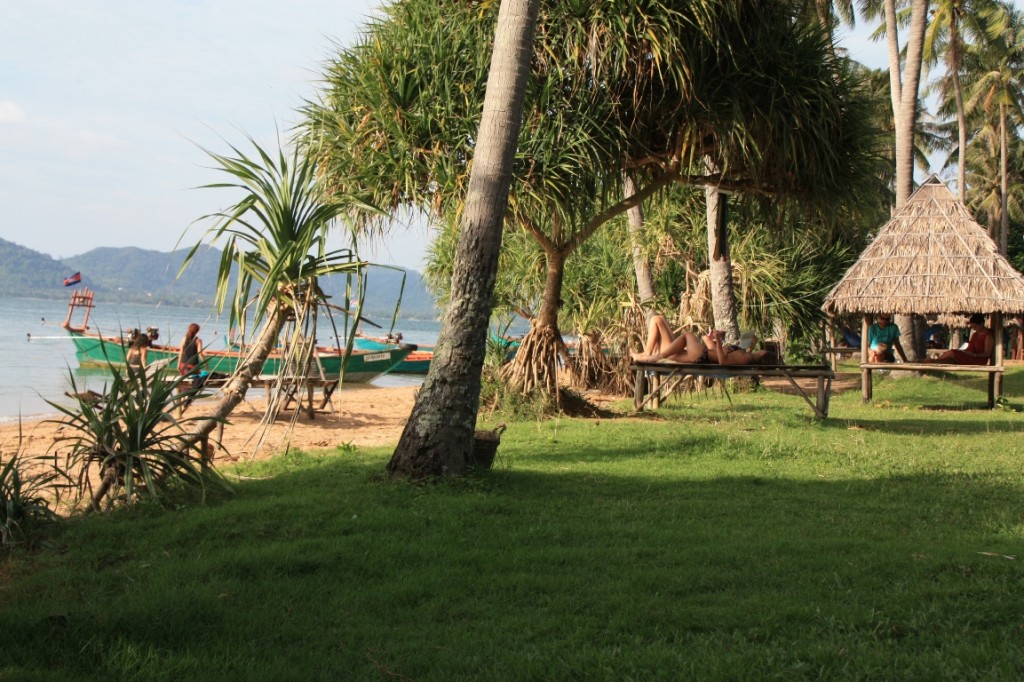 Peaceful as it looks now, even on this small island the Khmer Rouge had a base in the hills in the center of the island. The remnants, however, are not accessible due to the dense and thorny vegetation. Maybe a blessing in disguise. Cambodia is a country where its bloody past is still very much visible. It doesn’t however, take away from the natural beauty, rich culture and resilient people. 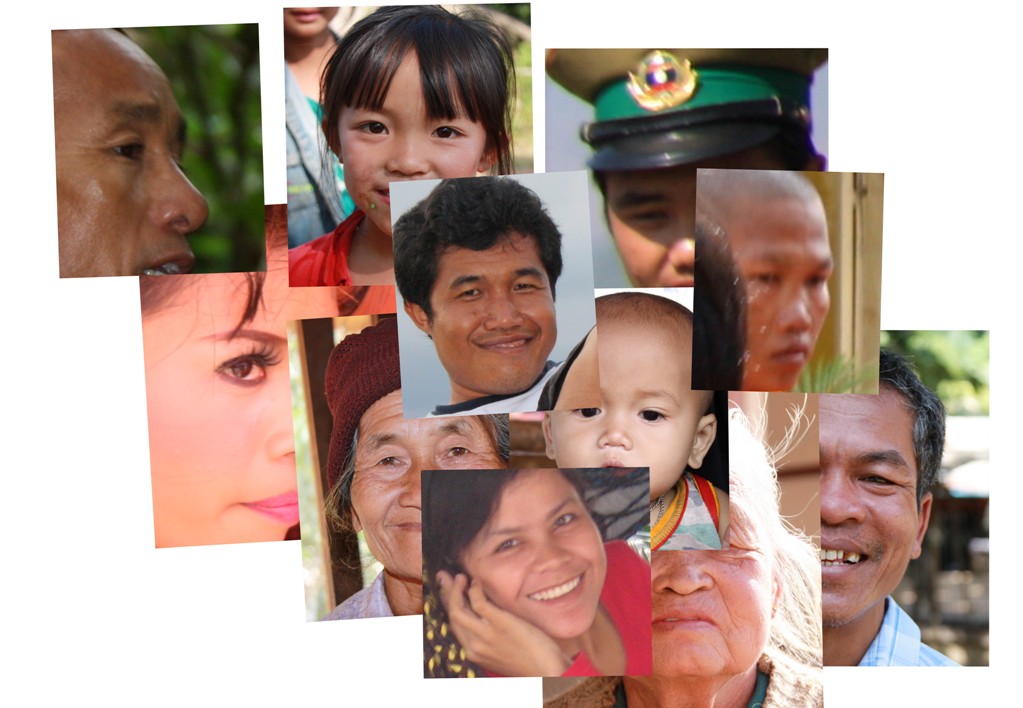 Going to Cambodia? Some Trips to Remember

If you want to experience Cambodia to the fullest, why not book an Urban Adventure in Phnom Penh or Siem Raep? We offer an introductory Historical Tour in Phnom Penh on which you will explore Phnom Penh’s recent tragic history. With a local guide you will visit Tuolsleng Genocide Museum and Choueng Ek bone pagoda. Learn about the Cambodia of the past and present with a local guide. Explore local politics and finish by sampling some interesting and delicious Khmer snacks.

The Phnom Penh Discovery tour lets you jump into a cyclo (becak) to explore the heart of Phnom Penh, feed the monkeys at Wat Phnom, explore the bustling Central and Russian markets and savor the flavors of Khmer snacks.

The Mekong Sunset Tour allows you to explore local Cambodian life on our sunset island visit and boat cruise. You will travel by tuktuk and boat and see Mekong island, a Buddhist temple and a beautiful sunset from the water at the junction of the Tonle Bassac, Tonle Sap and the mighty Mekong Rivers.

We also offer some exciting Urban Adventures in Siem Reap. On our Active Angkor Tour you ride through the countryside to visit the Rolous group of temples. Cycle the back roads through sleepy country villages. Say hello to excited children and their families, explore some of the oldest temples in Cambodia, see traditional shadow puppets being made and a shadow puppet performance and savor the flavors of Khmer snacks and a local lunch.

Can’t wait to see the Angkor Wat? Then the Angkor Adventure Tour is just for you. You will visit the world’s largest Hindu temple – Angkor Wat, Bayon with its 54 towers decorated with more than 200 enigmatic smiling faces and Ta Prohm, the jungle temple made famous in the Tomb Raider movie. Regain your energy enjoying a sumptuous Khmer feast in a local Khmer village surrounded by rice paddies.