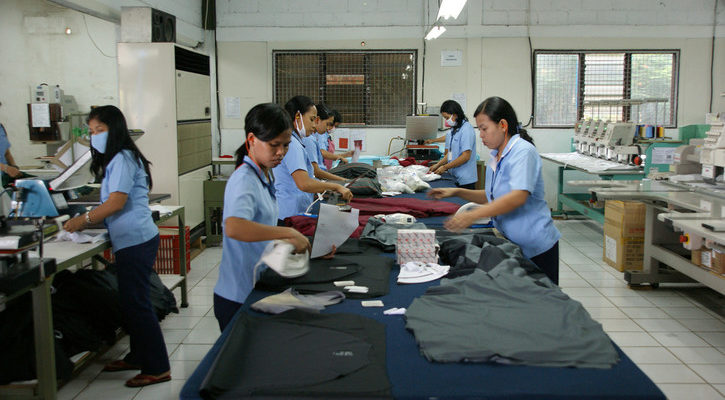 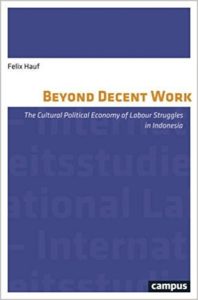 Indonesian wages continue to be among the lowest in the region. The term ‘decent work’ is generally defined as fair globalisation and poverty reduction through the promotion of competitiveness. This is achieved by improving compliance with existing labour regulations. But more radical unions in Indonesia have decided not to be part of ‘decent work’ schemes at all. In his book Beyond decent work: The cultural political economy of labour struggles in Indonesia, Felix Hauf argues that it remains questionable whether low-cost production can ever be compatible with ethical labour standards given that the Indonesian minimum wage (which is not even paid by many employers) is seldom above subsidence levels.

Hauf’s book is first and foremost concerned with whether or not ‘decent work discourse’ is helping Indonesian unions in their political strategies and everyday struggles for better living and working condition for workers, and if so, how.

Over the course of the book, Hauf develops a more critical understanding of what ‘decent work’ actually stands for. In many ways ‘decent work’ schemes simply act to boost the public image of transnational corporations and represent only cosmetic changes in line with their corporate social responsibility activities. They are rarely intended to bring fundamental change to the economic imbalance experienced by workers in the global South, but are merely ‘strategies aiming to humanise neoliberal capitalism’.

In order to evaluate the impacts of ‘decent work’ schemes in Indonesia, Hauf examines three case studies in the garment and textile industries, which are among the most globalised sectors in Indonesia. Before revealing his findings Hauf offers a detailed examination of his theoretical framing, cultural political economy, and his methodological approach, referred to as critical grounded theory. He engages with the prominent writers of post-Marxist thought, such as Gramsci and Poulantzas and the usual big names from French poststructuralist philosophy. The works of Bob Jessop and Ngai-Ling Sum, who have thoughtfully dissected the flaws of late capitalism and neoliberal globalisation, are Hauf’s key references.

Passages in the book on the downfall of Atlantic Fordism in the West and the Keynesian welfare state are not without interest, but they are not particularly relevant to Indonesia, as the history of labour in that country is quite different. Hauf’s theoretical thinking on labour regulation is mostly suitable, but what is missing from his cultural political economy analysis is its economic component.

Whilst outlined briefly in Chapter 5 with the help of the writings of La Botz and Ford, more emphasis was also needed on the specifics of Indonesia’s case, its macro-economic developments since independence and the history of unionism. The addition of detail on income structure, unemployment/underemployment and living standards in contemporary Indonesia would have been helpful to those readers who are not Indonesia experts. One gains the impression that, in this book, Indonesia is simply a case study to serve as a vehicle for wishful thinking, particularly when it comes to detecting the counter-hegemonic struggles of unionists that might spark revolutionary changes in the labour sector.

This wishful thinking was particularly obvious at the end of Chapter 7, in which Hauf describes two cases of counter-hegemonic struggle in Indonesia. The first the short-lived occupation of a factory (PT Istana) and the second the cooperative cultivation of coffee in Java. Hauf’s reasoning reads: ‘Although the factory occupation at PT Istana can hardly be called a success story of industrial production under workers’ control, it clearly shows that there are radical alternatives envisioned and enacted by Indonesian garment workers and their unions’. Both cases might be categorised as counter-hegemonic discourse, but deducing from them (and from a number of large strikes that took place in 2012) a much broader reaction to the so-called crisis of capitalism, appears naïve. It ignores other developments in Indonesia’s labour and employment sector in which price dumping and labour flexibility have reached new levels, as evidenced by the success of Go-Jek, an app-based motorcycle taxi service and all its latest related service offers.

Hauf spent several months in Indonesia on fieldwork in 2011 and 2012, during which time he conducted a number of semi-structured interviews with representatives of the International Labour Organisation (ILO) and different Indonesian unions. He described this ‘ethnographic immersion into the field’ as ‘fundamental’, as ‘the researcher employs pre-concepts to better understand how discourses and imaginaries become practically relevant in people’s everyday lives’. However, it is not entirely clear where (presumably in Jakarta) and in what surroundings those interviews took place, or how the informants were chosen, other than with the help of snowballing and according to their availability and interest in participating in his study. Here, it might have been interesting to investigate and discuss more thoroughly the cases of those informants who declined to participate, which can often be a rather insightful exercise. Although Hauf claims that his fieldwork was ethnographic – a claim often encountered outside of anthropology – there appeared to have been little use of Indonesian-language sources and ethnographic material.

The empirical contribution of Hauf’s book is its critical analysis of two major campaigns that supposedly serve the ‘decent work’ agenda. The first of these was ‘Better Work Indonesia’, an approach based on the Cambodian Better Factory Scheme and introduced to Indonesia as a monitoring project during the ILO’s targeting of the garment industry in 2011, where they promoted competitiveness by improving legal compliance. The second case study was the ‘Play Fair Alliance’, an 18-month negotiation process between unions, factory management and international sports brands such as Nike and Adidas, which led to the signing of the Freedom of Association Protocol. Hauf characterises ‘Better Work Indonesia’ as ‘hegemonic “decent work from above” imaginary’. ‘Play Fair Alliance’, on the other hand, he characterises as ‘sub-hegemonic “decent work from below” imaginary’ because it changes the hegemonic codes of neoliberal labour regulation in important ways, especially with regard to active participation in unions.

Hauf ends with a strong plea for an alternative economy, a ‘“solidarity economy” [that] provides alternative employment opportunities … [and] new forms of identity and class consciousness’. Although reading this book sometimes requires strenuous effort, Hauf has shown that he has outstanding analytical skills and is definitely an author to look out for in the future.