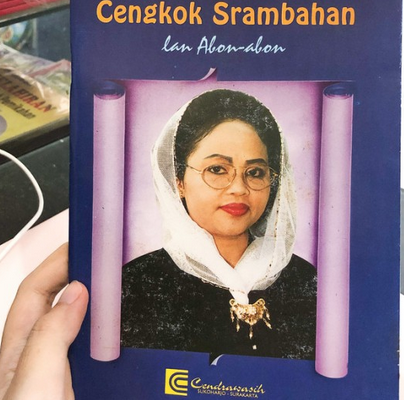 An American Sindhen in Solo

An American singing student navigates aesthetic culture clash in Central Java—and narrowly avoids being fitted with a large black hairpiece. I am about to get up on stage, surrounded by a group of female singers and the otherwise all-male musicians of a Javanese gamelan ensemble. We have been hired to perform at a community festival in Solo, Central Java. The women around me are almost unrecognizable as the people I rehearsed with yesterday. The sindhen (solo female singers, also known as pesindhen) wear the most elaborate costumes in the ensemble. These women are crowned with large black sanggul (hairpieces) that effectively double the size of their heads. The sanggul are decorated with filigreed golden combs and set off with sparkly plug-like earrings and bright gold jewellery. The sindhens’ faces are covered with whitening powder and their eyebrows are darkened with kohl. Pink eye-shadow reaches up to their brow-lines and their lips are painted blood red. They are dressed in luminously-coloured kebaya (traditional blouse) and ornate kain (traditional batik cloth tied at the waist), with their knees so tightly encased that they are forced to take my hand for support as they cautiously climb the steps to the stage. They delicately settle themselves on their stools, which are decorated with lace and beads, hemmed at the edges with bright pink or blue ruffles. As I try to sit cross-legged in my new kain, a young girl turns to me with raised eyebrows and asks, “Did you do your own make-up?”
I take a deep breath. The women around me glitter and sparkle. In my attempt to remain dull and unobtrusive I stand out more than I would in shimmering purple eye-shadow and a large black hairpiece.

I am spending the year studying traditional Javanese singing in Solo. The songs I am learning, sindhenan, are traditional poems recorded in a mixture of High, Low and Archaic Javanese and performed by solo female singers. In the several performances I have participated in this year, I have never once managed to appear in an entirely appropriate costume. At my first performance, the women from the group I rehearse with wanted to fix a jet-black sanggul on the back of my sun-lightened, curly brown hair. The idea of having a hot uncomfortable hairpiece on my head for a four-hour performance doesn’t appeal to me, especially one that accentuates the difference in my hair colour from that of those around me. I have successfully avoided this ordeal by going to the salon and having my hair done prior to performances. Here, the stylists tease my hair into a helmet with a small bun at the back, in a modified sanggul style that some women in the group wear every day. I can tell by the looks I receive from the other group members that this is not a proper hairstyle, but they don’t want to offend me when I’ve gone to so much trouble. When I am inevitably asked why I didn’t wear a sanggul, I reply that I still need to go to Jogjakarta to buy one in the right colour. They tell me I must go ahead and do that before the next performance, but I never do.
When I go to the salon before my second performance, the stylists are openly appalled by my shoes. I have on a pair of white plastic sandals with a flower pattern, which are much nicer than my everyday shoes.

“You can’t wear sandals to a wedding!” one of the women exclaims. “Everyone will laugh at you.”
They bring out a pair of sequined blue shoes with two-inch heels that they sell at the salon. I explain that wearing shoes like those would immediately cause me to fall on my head, which would, definitely, make everyone laugh at me. They shake their heads in disappointment and let me go off with my apparently ridiculous sandals.
My first attempt at Javanese attire was so abysmal that it didn’t warrant comment from the members of the group. I wore a short-sleeved kebaya with only one top button and a matching camisole underneath, paired with a silk sarong from the US. My next invitation to sing was for a wedding and I decided that I needed to dress more appropriately for the occasion. I went to Batik Kris (a top-end batik outlet) to buy a proper kain. I needed a traditional brown batik, already sewn into a skirt with pleated folds in the front, because I couldn’t yet tie one properly by myself. The type of kain worn by sindhen is designed to taper fiercely to the ankle: an effect achieved by the insertion of a thick length of elastic around the knee area. In order to allow for walking, I had to look beyond size XL and reluctantly buy size EL (Elephantine Large, perhaps?). I wonder where larger Indonesian women buy their clothes if I have to wear plus sizes. Despite its EL label, I still had to cut the elastic inside my knee-hobbling skirt. I was very proud of myself when I arrived with my new, practical yet traditional-looking, kain at the next performance. I manoeuvred my way up on stage and sat down next to the same teenage girl who had once appraised my makeup. She surveyed me ruefully and asked: “Who tied your kain? Did you do it yourself?”
I laughed, considering the complexity of the style, and told her I had bought it pre-tied, lifting my kebaya to show her the clasps. “You’re just like a little kid,” she said, giving me a condescending smile.

At the next rehearsal, one of the women handed me two pieces of fabric—one turquoise with gold, and one cotton candy pink with gold—and instructed me to have two new kebaya made for upcoming performances. I headed to the tailor and had them made up to specification, but I refuse to wear the strapless girdle that is worn underneath. This is a ridiculous thing to try and sing in and the Women’s Studies graduate in me rises up in protest. I had a solid piece of matching fabric sewn into the kebaya as a lining to imitate the girdle. When I met the ladies of the group in my almost uniform kebaya, they were very pleased—for a while it seemed that they hadn’t noticed my lack of a girdle.
Why do these women want me to fit in so badly? I am clearly not Javanese, so dressing in a traditional outfit seems contrived and certainly won’t fool anyone. I think that Javanese women often look very beautiful in the outfits I have described. I just don’t think they look beautiful on me and, with my conspicuously white skin, I stand out no matter what. The one time I made the mistake of sitting too close to the edge of the stage, I had three different men come up and put their arm around me—wanting to have their pictures taken while I was trying to concentrate on singing. When I realized this wasn’t going to stop, I squeezed my way behind the others and sat farther back on the stage.
In Solo, I am a novelty as a foreigner because the city doesn’t attract many international tourists these days. As a sindhen I’m doubly interesting. Sindhen have a reputation as ‘loose’ women because of the associations attached to their profession. Historically, singers tended to also be dancers and sometimes served as prostitutes after performances. Occasionally this stereotype is bolstered by affairs between singers and male musicians. Currently, the sindhen are the only women in an otherwise all-male musical group. They are usually unaccompanied by their husbands—if they are married— sometimes performing far from home until the early hours of the morning. For a Javanese woman this life-style is considered very risqué; no matter how she conducts herself, her morals will be questioned. Men’s eyebrows rise when I tell them I’m studying traditional singing, even if I’ve just mentioned that I’m travelling with my husband. Performing as a sindhen brings me extra attention, beyond my appearance. I was once asked to sing at a wayang kulit (shadow puppet performance) and this caused me to really consider what role I wanted to play in Java. When performing with the women’s group I tend to sit behind the others and sing the male chorus part instead of the more prominent solo women’s part. I usually don’t sing a solo piece until the very end of the performance, when the audience’s attention has waned. At a wayang performance, I would be singled out as an “American sindhen” by the dalang (puppeteer) and invited to sing while everyone stared at me, waiting to hear how I would sound. I don’t mind getting attention for my voice, but I don’t want to be singled out because of the way I look. I have worked hard to study Javanese vocals, but I’m still a student. It demeans my work and the work of other talented sindhen if I am asked to sing purely because of my exotic foreign-ness. I feared that at a wayang my novelty value as a white sindhen would far outweigh any vocal ability. In this particular case, the dalang who invited me had never even heard my voice. Singing with the women’s group, I am able to focus on my singing; how I present myself to the audience is still of concern to them, but it isn’t made into a big public issue.
Despite the inevitable attention I receive, the ladies in the group want me to feel comfortable and part of the group. They express—through teasing and encouragement about the matter of proper clothing and appearance—their desire to include me and take care of me. I appreciate this, but have learned to embrace my role as the idiotic but well-meaning foreigner. It allows me the freedom of disobeying Javanese cultural codes without others taking offence. I am offered pity rather than anger. This I will happily accept until I have been in this country too long to play the fool. Life will be difficult when this is no longer a viable role. In the meantime, I stubbornly hold on to my American urge towards individuality and independence. I want these women to accept the real me, someone who doesn’t want to wear a girdle or sit on a frilly pink throne. So I make small changes when they correct me—and I play dumb.
“You can’t wear that kain,” the organiser of the group whispers to me. “That batik means you have a day job and you will never get any respect if people think you have to work.” I read between the lines and appreciate the sentiment, while I pretend my Indonesian isn’t good enough to understand her. I walk away smiling, adjusting my new sparkly earrings.
(Jessica Zike)

Jessica Zike is a clinical social worker from America. First published in Latitudes.