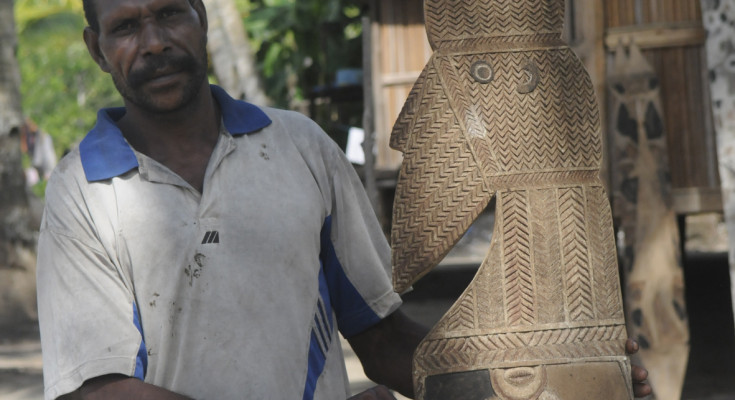 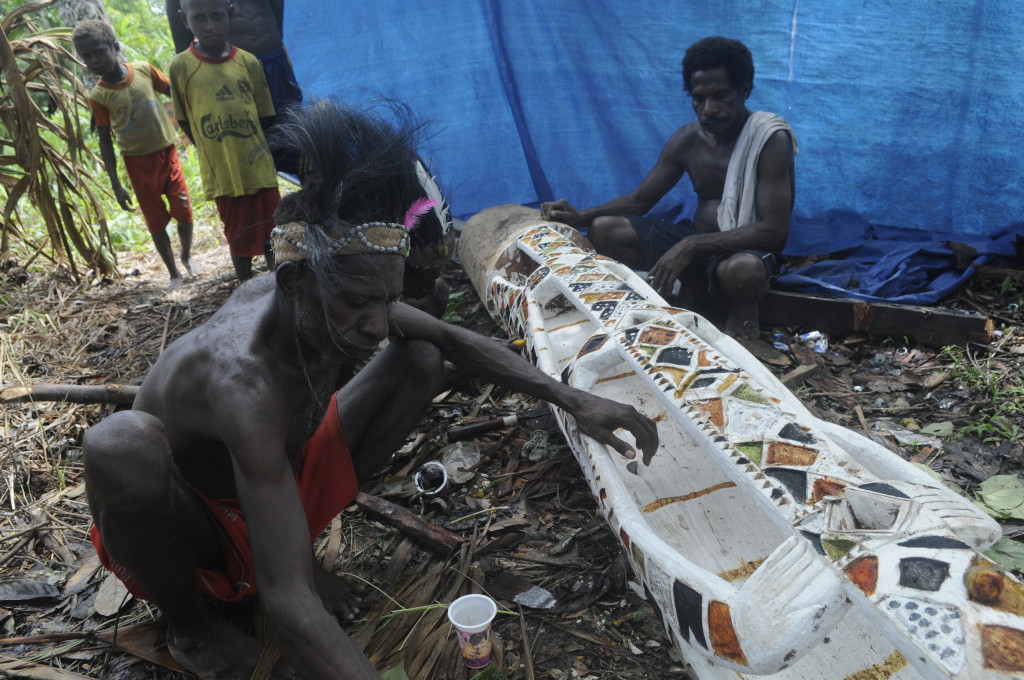 Long and heavy it lies on the wet morning grass, the dew licking its undersides. Young sunlight grazes its skin. Carvings cover it end to end, its trunk hollowed out. You can see them, the two people, one on top of the other, looking out with their silent eyes. Above them rising like a defiant titan, is the head of a crocodile, teeth bared, frozen, as if Medusa had glanced its way. And like a half-crazed flag caught in an Arctic wind is the final mélange of symbols in Kamoro-speak.

Around it are groups of men, young and old; silent on their haunches or whispering almost reverentially, as if afraid to awake the two still, white souls of the biro. They have been looking at it for a very long time now; its whiteness. It will shine for miles. It will make the colours stand out even more. Tomorrow everyone will be impressed when they erect the biro. Tomorrow the boys will have their karapao– their initiation ceremony.

That whiteness was worth the day’s work. “Well more if you really think about it,” said Alo. “Yes, you’re right,” the others agreed. The whiteness came from the omapoko which Alo had to gather and work on. 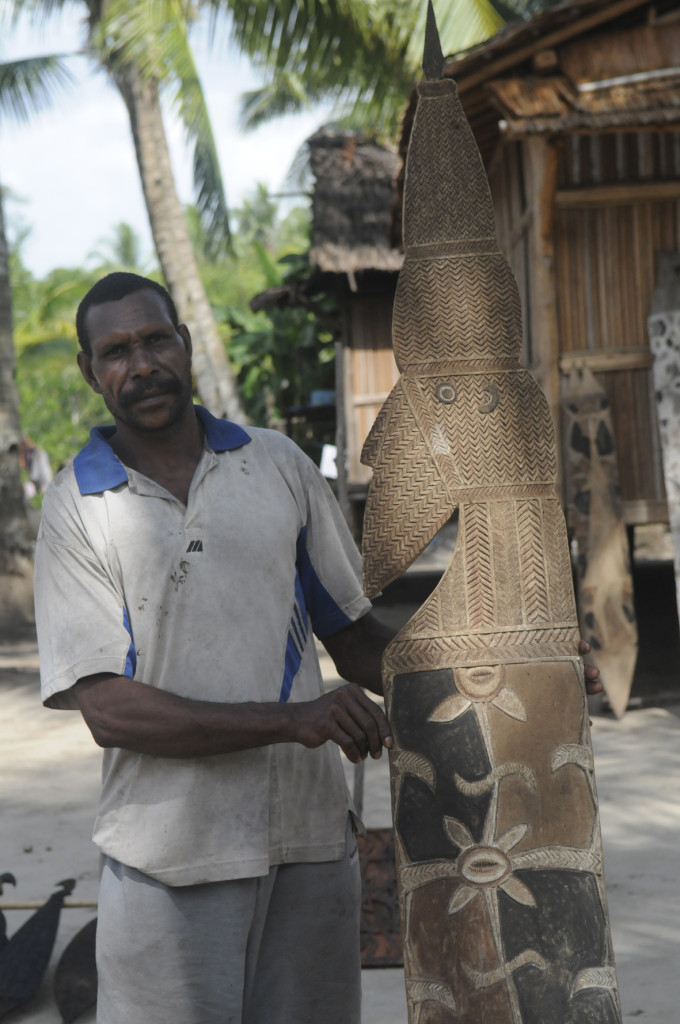 “Hmm, more,” Alo nodded, and then chuckled, “but we had baked omapoka to eat. I bring some more.”

A young man arrives with a beat up FMI hardhat and a cut-off Aqua bottle filled with white powder- lime. Frans couldn’t afford to spill any, unless he was willing to paddle all the way to the mangrove swamps, dig around for the mollusks, paddle back, clean them, gather firewood, burn them one lot at a time (how boring – about an hour or two for a batch until they turn white), and then pound them with a rock until they become fine powder (duh!) and repeating it until all the omapoko was burnt! No way.

And yesterday was no picnic either painting the whole biro. Romanus had grabbed his hardhat off his head, dipped it into the ditch, filled it with water and given the hat back to Frans. “Hold that,” he said. “Binus, lime. Herman, get some leaves.” Like a cooking contest, they stood there pouring and stirring with a stick until they got the right consistency.

Then with the bunch of young green leaves tied together with a long juicy stem, Romanus dipped the “brush” which looked more like a sawn off ,midget banana tree, into the lime paint, and gave the biro a good splat followed by determined strokes.

An old t-shirt, fingers or even one’s hands were also used to cup, spread, smooth over or dab. 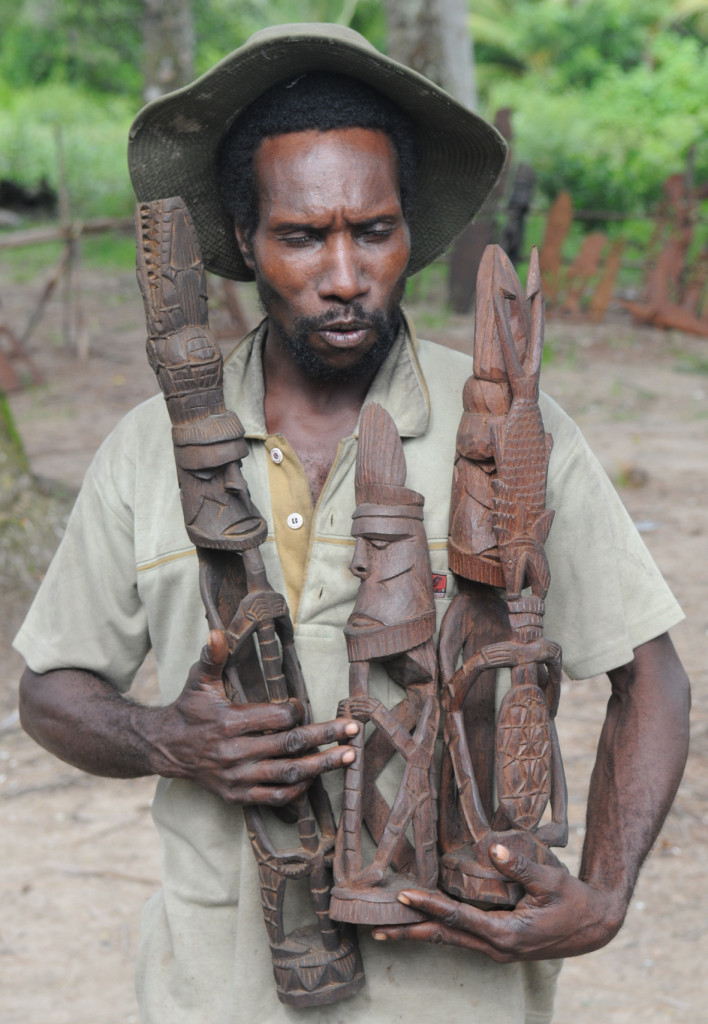 Today, the colours were being added. Herman started a fire and everybody gathered round. From plaited bags tumbled out galangal, watai, yellow flowers, black berries, a bluish tinged rock, and ABC batteries.

“Wa, Joakim where did you get the blue rock from?”

“Ah, I was in Poraraoka visiting my brother and he gave it to me. He knows we don’t have it here.”

“Alright, you lot,” Romanus quickly interjected, picking up the rock. “And what’s with the ABC batteries, Beni?”

“Well, just in case we run out of charcoal,” he replied, “I’m very willing to chop them into two and dig the carbon out. You never know how much black you need.”

The painting began. The experienced knew that applying different levels of pressure or mixing it with fresh lime paste got you different colours. Galangal on dried lime turns into a yellow or orange, red comes from watai, a juicy hairy fruit with seeds. Mixed with the lime water it turns pink.

“Here,” Binus yanked out a stem of grass, dipped it into the pink and dotted the red patch.

“I’m going to do green here,” grinned Primus, and with a damp bunch of tiny leafed grass started rubbing madly.

Romanus appeared with a stick of charcoal and inked the square next to his red one. “Binus, crush up that blue rock, I know where it goes”.

“Yes, I have to thank you for the lime – Alo gave me some for sealing the drum skin.”

“Our pleasure. Whose blood did you use?”

“Agus’. His leg is still swollen from that pig fly bite. His blood was nicely thin. I could tell when I was scrapping it off him with the omapoko shell. It mixed well with the lime and didn’t dry up quickly either when we smeared it onto the lip of the drum, plenty of time to stretch the lizard skin tight too. Listen.” Thom, thom, thom , thom.

“Excellent,” they said,” It’s so smooth. The handle is very nicely rounded inside.”

“Martinus lent me some glass shards. The handle’s because I caught that stingray – it had a good sized tail – just right for the job.”

“Did you hear about Yan? He ripped off one of the panels from old Anton’s abandoned house for a yamate.”

“He didn’t need to cut a tree down for anything else right??” 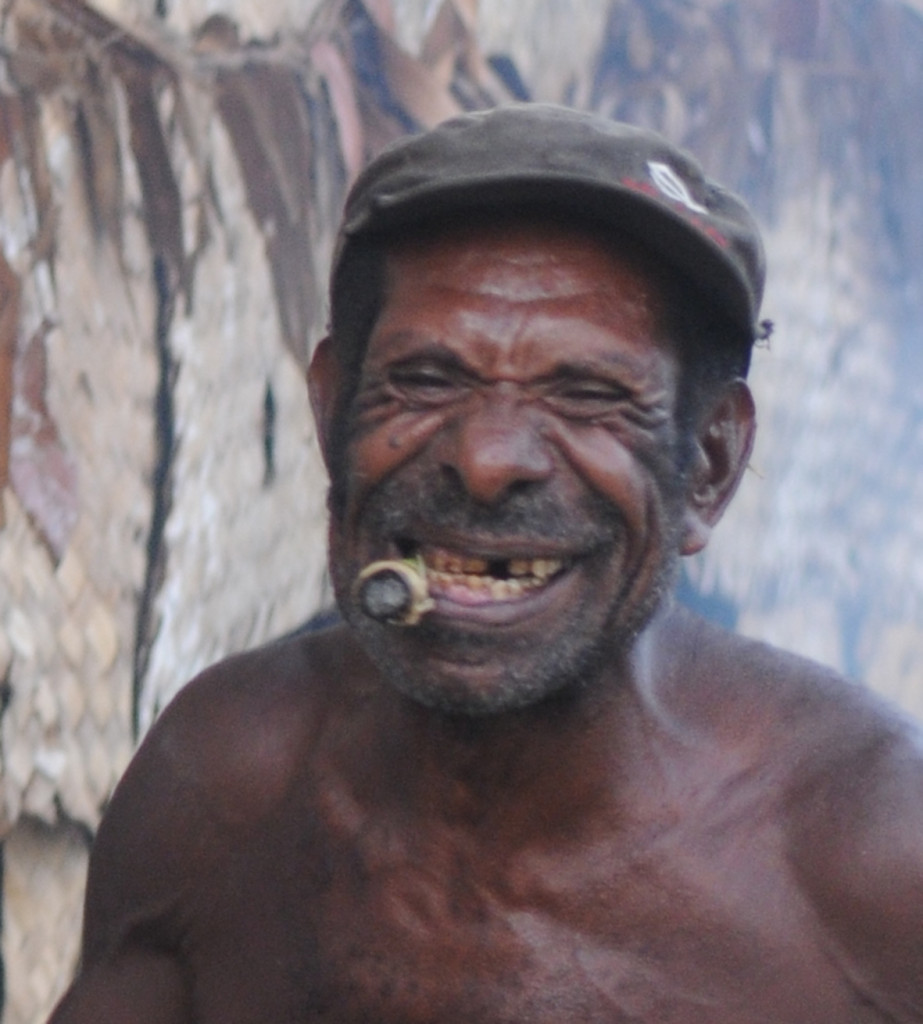 Romanus and his cheroot

“Right. So take the plank. No sense in cutting down a tree for one plank of wood.”

“I think the bules have a name for that, when you re-use something,” said Frans.

“Yeah, eco, eco-living. Yup. Eco-living. Been there, done that. You think they’ll read my book if I wrote one about it?” said Primus.

“Sticks and stones won’t break my bones,” silently he reaches for the coconut shell with the crushed blue rock.

Entrance by invitation only. Please register at kamoroculture.blogspot.com from 11th September 2011.

There will be singing, drumming and dancing by the Kamoro, carving demonstrations and presentations on the Kamoro and Papua by Dr. Kal Muller.