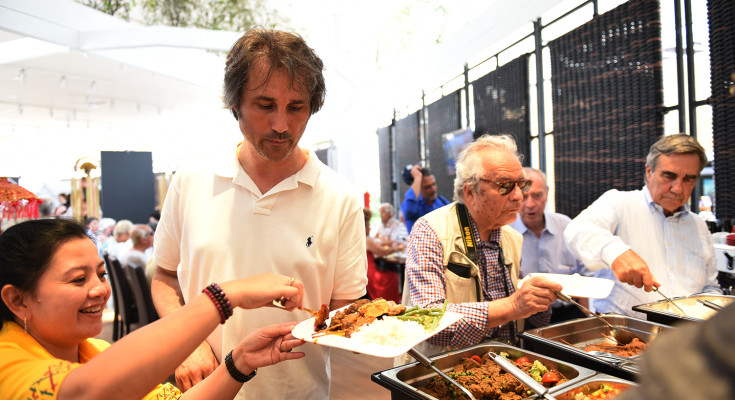 by Myra Sidharta
Why would I, a person well known among my friends as a lousy cook, want to write about Chinese food? First, because in spite of my clumsiness in the kitchen, I know a lot about the theory of cooking. Second, because by now I have my regrets about escaping my mother’s kitchen to become a bookworm instead of an accomplished chef. When I was young, I thought that the kitchen was a horrible place to be. My mother was a very good cook and my sisters always scolded me for being slow and awkward with culinary matters.I found my solace instead among the interesting books that filled our library. But now, years later, when my sister who never finished high school is famous for her cooking and has catered for more parties than I have written articles, I have reconsidered my former attitude. I have realized that being a good cook means that you will be appreciated by your friends because you can serve them all kinds of delicacies made with your own hands.

Confucius (551-479 B.C.) once said that “the path to your friend’s heart and love is from your cooking.” This is probably why the Chinese have, for millennia, sought out ingredients to enhance their cuisine. Their search led them to brave the strong winds, rough waters and treacherous coral reefs of the islands of Nusantara, now called Indonesia. Based on the evidence of shipwrecked vessels filled with exquisite ceramics found off the coasts of Indonesia, experts have estimated that Chinese were visiting the archipelago as early as the Tang dynasty (618-908 AD).
After centuries of such traveling, they certainly knew how to win strangers’ hearts with their cooking. In the 13th century, Zhao Rugua mentioned in his book Zhufan zhi, or “Monograph on the Foreigners” (1225), that merchants who wanted to trade in the Southeast Asian realm of Brunei would first present the king with delicious dishes before getting down to business. Cooks were important members of the staff of the trade missions sent by Chiense kings to foreign countries.

In Bali, several pura or temples even have shrines devoted to the Cong Po Kong, or the ancestor of the cooks. While conducting a survey on the island, we found an important one of these shrines in the Pura Ulun Danu Batur in Kintamani and another in the adjacent Pura Teluk Biu. We found a third shrine in the Chinese temple of Gianyar, and another in a remote area, in the woods by Lake Tamblingan.

The shrine in the Pura Ulun Danu Batur is believed to have been dedicated to the cook of the famous admiral Zheng-He, who made several expeditions to the Nusantara archipelago in the early 15th century. This cook made a trip around the islands in search of ingredients that he could use to enhance his creations. While traveling the seas, however, his boat became stranded off the coast of Bali.