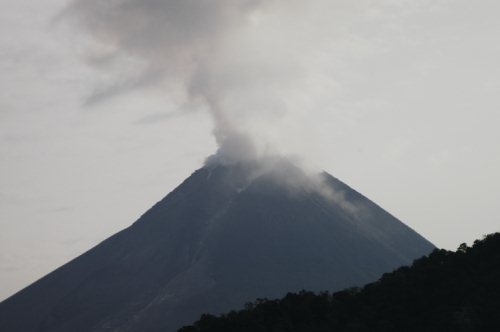 The beloved Mbah Marijan (grandfather Mairijan), gatekeeper of the volatile Merapi volcano near Yogya, is no more. The iconic man was among the first 33 victims killed in the recent Merapi eruptions. The volcano is located some 30 kilometers from Yogyakarta, on the island of Java. The restless volcano is the most active of the more than 150 volcanoes that line the archipelago, and are part of the Pacific Ring of Fire.

Since AD 1000 the Merapi has erupted no less than 80 times. Set in a densely populated area, the risk is always there. In 1994, 2006 and 2009 it rumbled, bellowed smoke and erupted, destroying several villages and forcing people to evacuate. While its most devastating eruptions took place in earlier times, it is still regarded as one of the world’s most dangerous volcanoes. Over time thousands of people have lost their lives to this sacred mountain.

Now, Mbah Marijan, a villager from Kinahrejo has been added to that list. Now what was Marijan, a 83 year old man, doing on the slopes on the rumbling Merapi?

Javanese culture is a rich mix of animistic, Hinduistic and Islamic beliefs. The city of Yogyakarta and its sister city nearby Solo are old kratons (sultanates) that have a longstanding history of mysticism. The Sultan’s family is still very much respected, not only by village folk, but also by the government (Traditionally, the president seeks the advice of the Sultan when confronted with obstacles).

Mbah Marijan, Guardian of the Merapi

Javanese animism attributes power to natural elements but also to people who can communicate with these elements. Mbah Marijan was the son of the previous guardian, Mbah Hargo. He was appointed by the Sultan of Yogyakarta, Sri Sultan Hamengkubuwono IX, in 1970 and was given the title of Raden Ngabehi Surokso Hargo. He replaced his father as guardian of the volcano in 1982.

Marijan led ceremonies to appease the spirits of the volcano by presenting them with offerings of rice and flowers in and around the crater. One of his most important duties was the performance of the annual Labuhan sacrificial ceremony dedicated to the spirits of Mount Merapi. A procession from the royal palace in Yogjakarta led by the guardian sacrifices a set of ritual offerings passed on by the Sultan to the volcano spirits. He described his job, for which he was paid $1 a month, as being “to stop lava from flowing down. Let the volcano breathe, but not cough.”

As the guardian of the Merapi, Mbah Marijan acted as an intermediate between the angry volcano and the people. He reached legendary status and was heralded as a national hero. Spirituality sells in Indonesia as elsewhere and soon Mbah Marijan’s  face was used in several ad campaigns for energy drinks and traditional medicines.

Mbah Marijan in a commercial for an energy drink

When Mbah Marijan saw his own image plastered on the side of a bus he was shocked. His head seemed so big he commented. From then on he didn’t want his picture taken.

Marijan was known for his dedication and loyalty to the king and became an Indonesian icon. Many villagers believed that he would be warned in a vision if an eruption was imminent. In May 2006, he refused to leave his village despite a mandatory evacuation order after scientists warned of an imminent eruption. He went with fifty other men to the village mosque when the volcano began to erupt. Following his example, a hundred other families also refused to evacuate. He was badly burned in a subsequent blast and spent five months in hospital after being rescued from his collapsed house.

He became a popular hero because of his refusal to leave his village and his insistence that it was his duty to discharge his responsibility for the welfare of the people. During an interview in 2006, he said, “Everybody has their duty. Reporter, soldier, police, they have their duty. I also have a duty to stand here”.

The demise of an icon

Marijan again refused to evacuate prior to the 26 October eruption in 2010, telling a friend that he could not leave because he had a responsibility, and that “my time to die in this place has almost come, I can’t leave.”

The last few weeks he was often up near the crater of the Merapi. Even though surrounding villages were evacuated he stayed put. He hadn’t received a sign from the Merapi yet, he said.

Thirteen other people, who were in his home trying to persuade him to leave, were killed along with him when his house was hit by a pyroclastic flow. Only the mosque in his village was left standing. Marijan’s body was found by search parties in a praying position; he was thought to have been killed instantly by the 1,000-degree Celsius cloud of gas and ash.

So ends the dialogue between a man and a mountain. The Merapi had the last word.