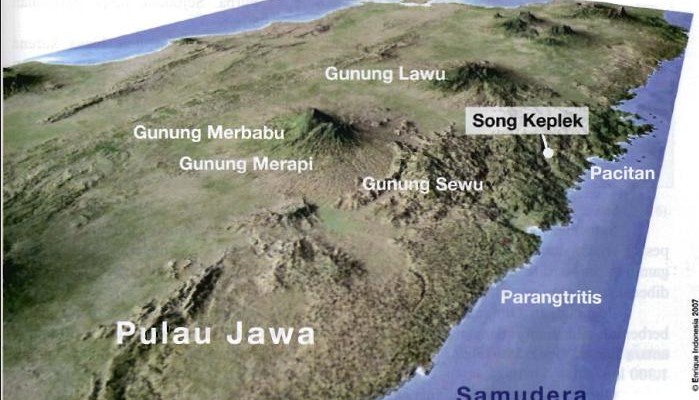 Magic Mountain: One Man’s Mission to Save Gunung Sewu Through Ecotourism

“Do you mind if I draw on your map?” Agung Setyobudi makes a huge brown streak across my Yogyakarta map, showing me the area Gunung Sewu (Thousand Mountains) occupies. It turns out one would need maps all the way to East Java, including the coast, to see the entire area. Gunung Sewu is huge; a plateau approximately 120 km long by 60 km wide, stretched between ranges of active volcanos both to the north and to the south. “It would take months to really explore it.” 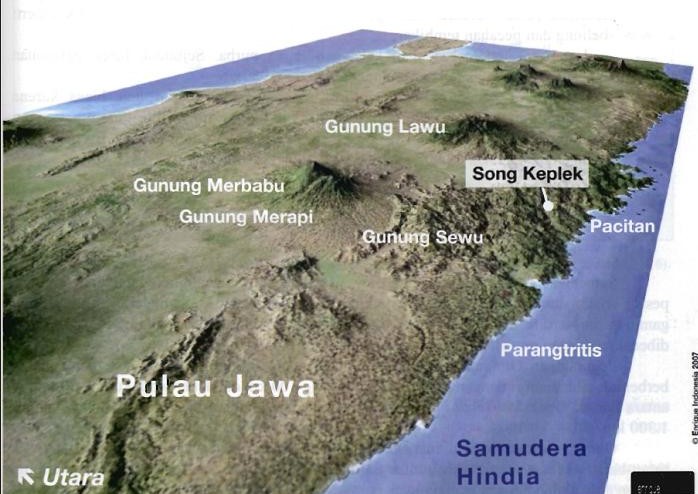 Setyobudi, founder of local non-governmental organization Save Gunung Sewu, spends a large percentage of his days and nights climbing, exploring and mapping this region. But why Gunung Sewu? Setyobudi seeks to protect the beauty and natural aspect of this region, but with the mystique of Gunung Sewu’s unique ecosystems, there is also an appeal for mining companies, rock climbers and archeologists. 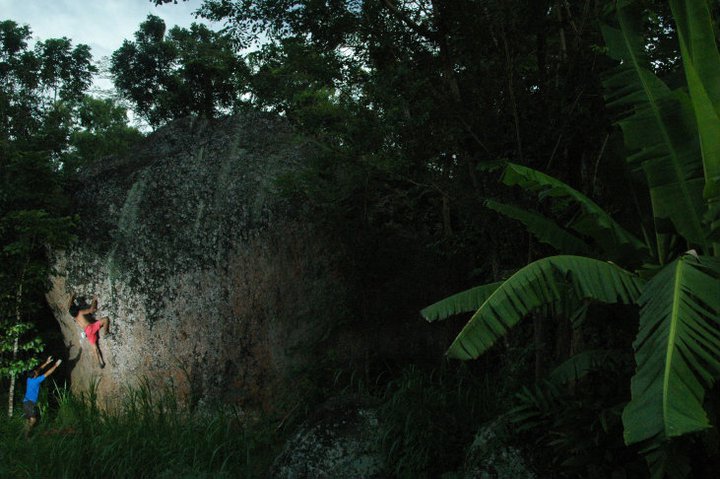 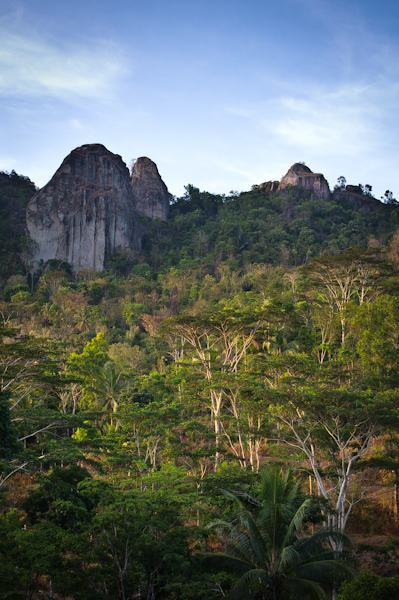 Gunung Sewu is unique in that it is one of only two areas (the other being Bantimurung) in Indonesia with Karst topography. The Karst topography at Gunung Sewu is characterized by its porous and soluble limestone and subterranean caverns, brooks and rivers. Surface water is scarce here, as it filters through the pours of the rock, causing the rocks themselves to be dry. Agung Setyobudi explains: “Due to the dramatic erosion of the limestone, Gunung Sewu offers almost unlimited rock climbing potential, from steep bouldering to multi-pitch ascents of free standing domes.”

The caves formed by the Karst topography in Gunung Sewu are homes to innumerous vital ecosystems. Home to both the Yellow-crested Cockatoo and Long-Tailed Monkey, whose populations are unfortunately dwindling due to mining and deforestation, Gunungsewu is also home to the most famous cave dweller – the bat. Bats are vital to the region because they serve as the glue between the ecosystems within the caves and those outside of the cave.

Fruit-eating bats pollinate the native plants in the area, and insect-eating bats control the insect population. It is important to maintain this balance of exchange in order to maintain the true ecosystem in the area, but unfortunately human disturbance in the environment has shifted the migration of bats and insects, leading to an overpopulation of insects, prompting the farmers to use insecticides which in turn trickle through the pours of the rock and disturb the entire subterranean water systems. This is just one effect of mining and deforestation in Gunung Sewu.

Mining is an industry that has challenged many of Indonesia’s natural ecosystems, and in Gunung Sewu it has created many disturbances. Gunung Sewu is a mineral-rich region, attracting mining companies with its abundance of limestone, guano phosphate, siderite, and magnetite. The National Government in Jakarta has classified Gunung Sewu as a Class 1 Area, prohibiting mining activities but permitting activities not affecting the environment. “Unfortunately in Indonesia there are rules behind rules,” says Setyobudi. 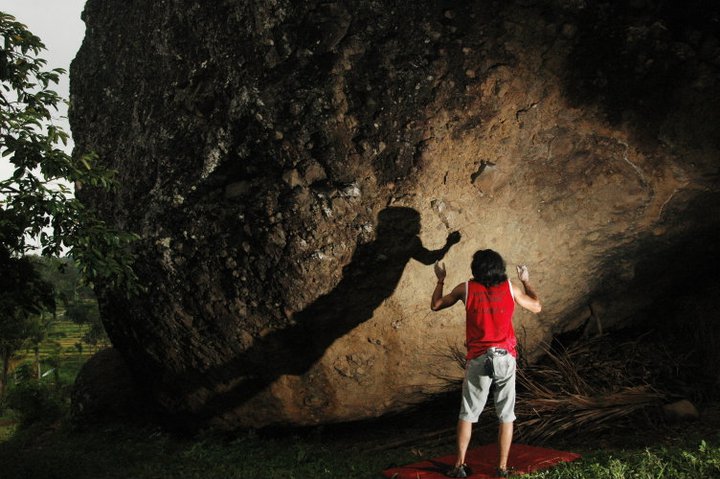 The local government in the region, which contains a certain degree of autonomy, chooses to abide instead by the Ministry of Mineral and Energy’s classification of mineral-rich Karst areas, which means that the locals do not need permission from the National Government to permit mining companies to do business there. Mining has already led to deforestation of native species such as teakwood for fuel and has collapsed the limestone fissures essential for the subterranean streams and ecosystems. Setyobudi claims: “Any change to any one component of the karst environment will have a ripple effect upon the other components, and generally lead to deterioration of the quality of the environment.”

In the creation of Save Gunung Sewu, Agung Setyobudi has a specific mission in mind; to promote enough rock climbing and ecotourism in the area to persuade the government to protect and preserve it. Artifacts dating as far back as 2000 B.C. have been discovered at Gunung Sewu, and many other archeological findings have yet to be discovered. Agung envisions the value of ecotourism replacing that of the mining industries in local villages. 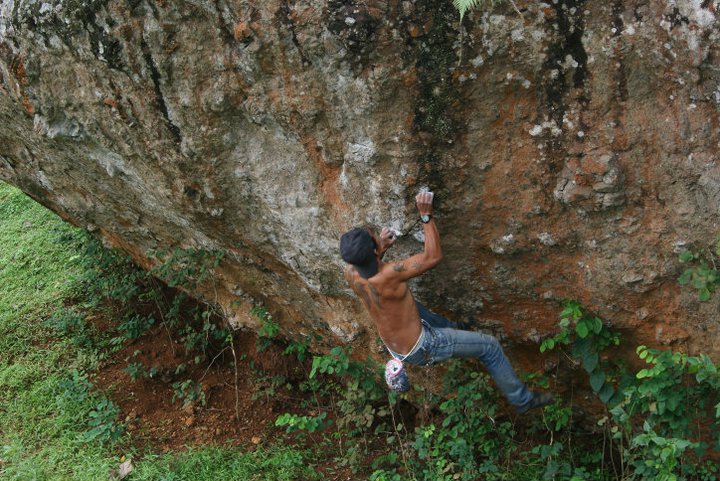 He seeks to share his passion for preservation with the local people in the community and aid and empower them to create a self-sustaining economy here without the development of resort hotels and asphalt roads. “The Gunung Sewu region should not be exploited with the construction of excessive (luxury) tourism facilities” according to Setyobudi.

He has been hand-crafting custom chalk bags to raise money for this organization. He hopes to soon find other means of funding soon.

See some examples of these fine colorful handicrafts here: 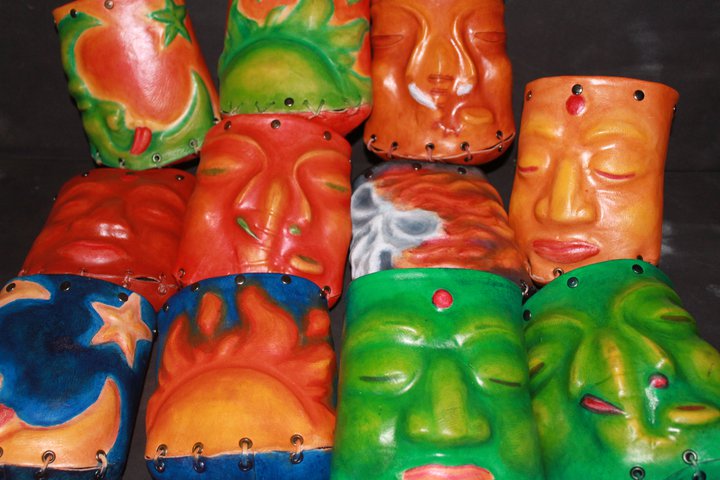 Chalkbags made by Agung Setyobudi

To learn more about this project or to purchase chalk bags, Setyobudi prefers that you contact him through his Facebook page here: http://id-id.facebook.com/people/Agung-Setyobudi/1304988962