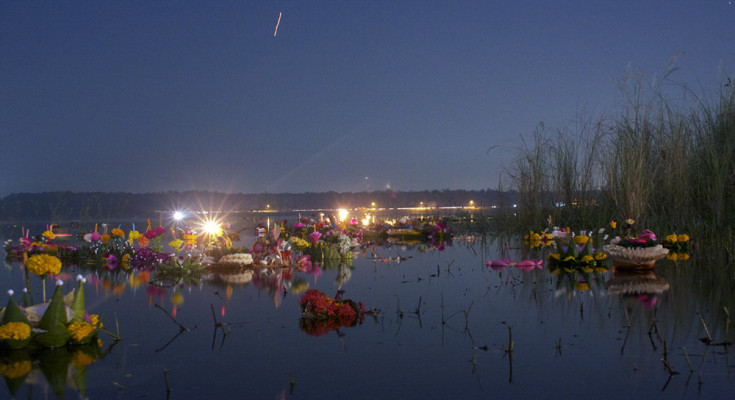 Loi Krathong Festival is celebrated in Thailand and certain parts of Laos, Burma and Malaysia (Kelanten), during full moon of the 12th month in the traditional Thai lunar calendar. Loi literally means ‘to float,’ while krathong refers to the lotus shaped basket, set adrift on the rivers, lakes or canal. Krathong consist of banana leaves, flowers, coins, candles and incense sticks. 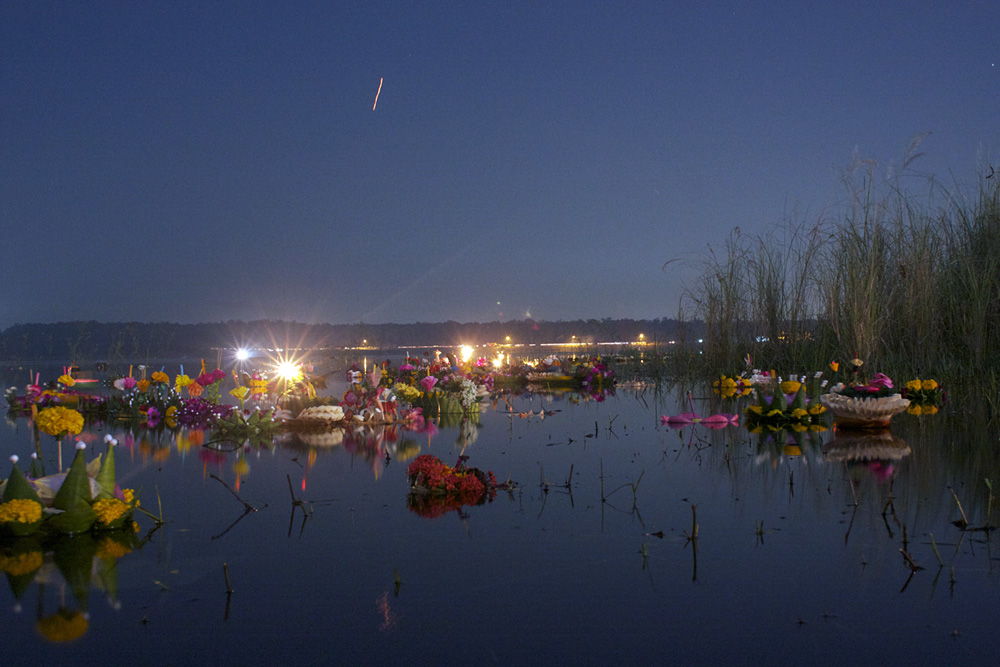 When people set their krathong afloat in the light of the full moon, the lights make for a magical atmosphere. The candles are a way to honor Buddha with light (the candle on the raft), the act of floating away the candle raft is symbolic of letting go of all one’s grudges, anger and defilements, so that one can start life afresh on a better foot. People will also cut their fingernails and hair and add them to the raft as a symbol of letting go of the bad parts of oneself.

Many Thai believe that floating a raft will bring good luck, and they do it to honor and thank the Goddess of Water, Phra Mae Khongkha. Besides that, raft building competitions, fireworks and beauty contests add additional flavor to the festival. 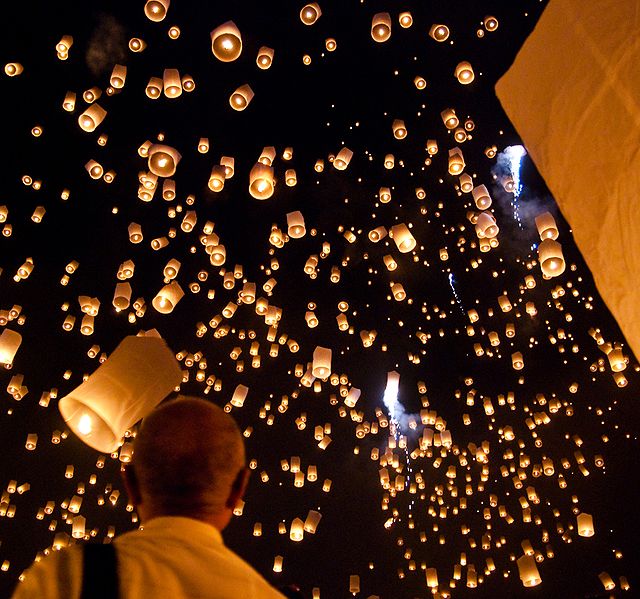 In the Northern Thai provinces that were once part of the ancient Lanna Thai kingdom, the Yi-peng Northern Lantern Festival is  celebrated simultaneously. Tubular lanterns (khom loi), resembling hot air balloons, are lit and released into the night sky as an offering the Lord Buddha. As hundreds of illuminated lanterns drift into infinity, they resemble large flocks of giant fluorescent jellyfish. Yi Peng accomplishes the same sense of wistful closure as the krathong floating downstream.

People usually make khom loi from a thin fabric, such as rice paper, to which a candle or fuel cell is attached. When the fuel cell is lit, the resulting hot air which is trapped inside the lantern creates enough lift for the khom loi to float up in to the sky. In addition, people will also decorate their houses, gardens and temples with khom fai: intricately shaped paper lanterns which take on different forms.

The most elaborate Yi Peng celebrations can be seen in Chiang Mai, the ancient capital of the former Lanna kingdom, where now both Loi Krathong and Yi Peng are celebrated at the same time resulting in lights floating on the waters, lights hanging from trees/buildings or standing on walls, and lights floating by in the sky. The tradition of Yi Peng was also adopted by certain parts of Laos during the 16th century. For more info on this festival in Thailand go to this informative Tourism Authority of Thailand website.