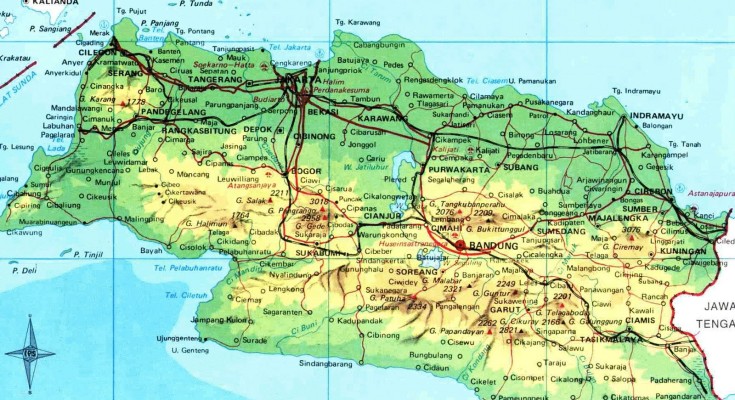 West Java is the most populated province in Indonesia, with over 43 million inhabitants. The capital Bandung is the third largest city in the archipelago and home to a whopping 8 million people. West Java offers stunning vistas, smoking volcanoes, tea plantations, historical (often colonial) architecture and great food and shopping. Sundanese culture and language are an intricate web of traditions and customs. Great food and open-minded friendly people will make you feel at home at once in West Java.

Bandung is the capital of the Sundanese, the main culture of the provinces West Java and Banten. Within this cultural hemisphere, only Jakarta is excluded. The Sundanese have their own cultural legacy and language, which is truly unique and can be experienced in no place better than Bandung.

Bandung is also known for the colonial heritage. The Grand Preanger hotel is an example of a hotel that was built in that time to accommodate the priangan, The Savoy Homan and the buildings on Jalan Braga are also relics from that era. The art deco style is characteristic of many of Bandung ‘s historical architecture with the flowing lines and repetition of abstract patterns.

The Dutch soon took a shine to Bandung and used the fresh climate and green mountainous setting as a retreat from the hot hustle and bustle of Batavia. In 1916, they moved the headquarters of the colonial army to Bandung and there were even plans to make Bandung the new capital of Indonesia . The city was referred to as the Paris of Java because it was the most European city of Indonesia both in climate and in atmosphere. The First World War interrupted these plans and Bandung never became capital, a fact sometimes still regretted by its inhabitants.

The most famous historical building in Bandung is the Gedung Merdeka (Liberty building), where in 1955 the first Asia-Afrika conference was held. This conference marked the birth of the non aligned countries confederation. The decline of colonialism spurred euphoria amongst the leaders of Asian and African countries to bind their forces and the banner ‘Bandung’s spirit is building a new world’ was testament to the moment that Bandung stood in the spotlights.

Modern day Bandung is a bustling city that offers great opportunities for shopaholics with factory outlets lining Jalan IR Juanda towards Dago and many malls for rainy days. Outside of Bandung, you can visit the Tangkuban Perahu volcano, tea plantations and hot spring. Read more about what to do around Bandung.

Tea plantations in Ciwidey near Bandung, By: Emma Kwee

During pre-Islamic period, dynamism and animism were two sets of beliefs that Sundanese practiced. Hence, these old belief systems coupled with Hinduism still play a big role in particular regions of West Java , i.e. Kampung Naga community and Baduy tribe. Although Sundanese are predominantly religious, they tend to also be very open-minded and welcoming to foreigners and their habits.

Predominantly, Sundanese people believe in monotheism as a form of organized religion, in this case Islam. A distinct facet of Sundanese culture is its food. The whole of West Jawa and Bandung in particular, are a paradise for food lovers. Sundanese food distinguishes itself for the variety of steamed dishes, such as nasi timbel (rice steamed in banana leaf) and little packages called pepes (steamed fish, meat or tofu in banana leaf). Also Sundanese meals are often accompanied by raw vegetable salad, with spicy sauces.

Apart from these main dishes, Bandung has several specialties that can be found only in the city and are hugely popular with local tourists. Examples are surabi (sweet or salty filled little baked pancakes), cendol (a drink with jelly and sweetened with coconut milk and palm sugar), colenak (roasted cassave root, again with either sweet or salty topping) batagor (baso tahu goreng, fried chunks of fish and tahu eaten in a soup or dry with peanut sauce).