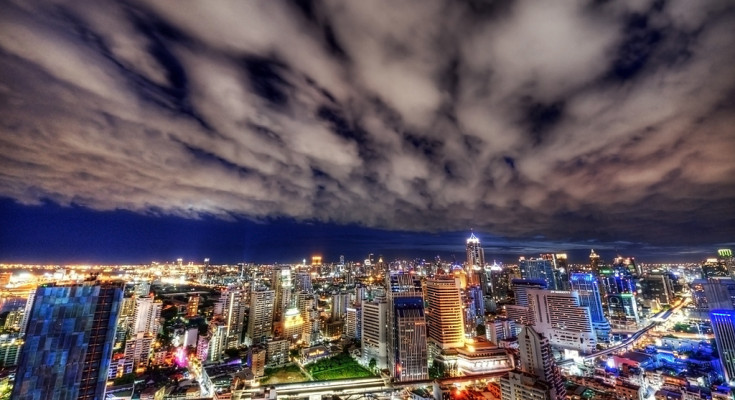 Thailand’s capital is well known on the world stage as an exotic and ruckus destination. Its non-stop pace, landmarks, and infamous nightlife have given it this reputation. This notoriety, while deserved in some ways, is only slightly accurate. In fact, Bangkok is a large, diverse city with something for everyone. 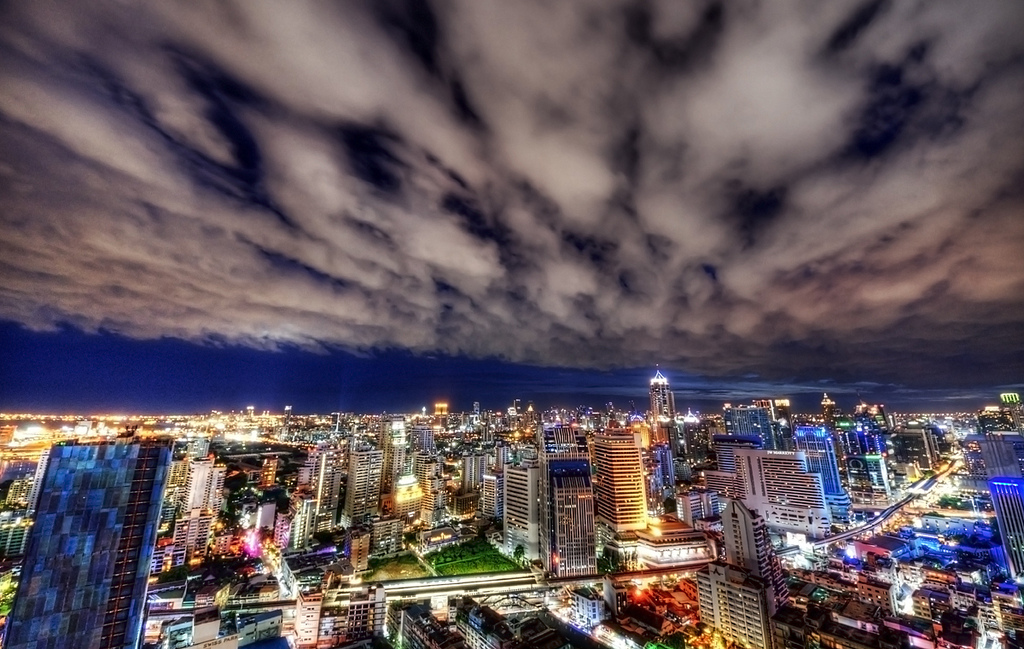 Bangkok at a Glance

Bangkok was founded in 1782, becoming the second capital of a new Thai kingdom established 15 years earlier. Thais know the city as Krung Thep, while Bangkok is only a foreign name. It sits on the banks of the Chao Praya River near the Gulf of Thailand. The population of greater Bangkok is 14.5 million, making it far and away Thailand’s largest city.

The Chao Praya Express takes you around Bkk, By: Swami Stream

Getting Around in Bangkok

Transportation becomes easier every year with the continued expansion of the BTS (Skytrain) and MRT (Subway). On top of this, the Airport Rail Link connects to both the BTS and MRT, and the Chao Praya Express Boat links to BTS Saphan Taksin at Sathorn Pier .

Most sights of historical interest are contained within the oldest part of Bangkok. This area is located on the banks of the Chao Praya River and enclosed by a canal to the east. It is not served by the BTS or MRT but by the Chao Praya Express Boat.

The most well known place to visit are the Grand Palace and Wat Phra Kaew (Tha Chang #9 pier), both of which are within the same walls. Right next door is Wat Pho, containing a famously large reclining Buddha. A short ferry ride across the river will get one to the remarkable Wat Arun (Temple of Dawn). Climbing its vertical steps will reward visitors with an excellent view of the river front. For another good view of the city, climb to the top of the Golden Mount. Bankok is home to plenty of museums and art galleries. Most notable is the Bangkok Art and Culture Centre (BTS National Stadium).

Many cities in the world are known for their shopping, but few can approach the range of goods and prices that Bangkok offers. Chatuchak Weekend Market (BTS Mo Chit, MRT Chatuchak Park, MRT Kamphaeng Phet) has nearly everything anyone could ever want and at discount prices. This huge outdoor market will see shoppers lost almost immediately in consumer paradise.

For indoor shopping, nothing beats the places in and around Siam Square. This area contains MBK, a large indoor discount market. For hi-so shopping, Siam Paragon is king, but everyone can stare at the Ferraris and Lamborghinis in awe. Further away from Siam Square is Central World, the largest shopping center.

North of Siam Square is the Pratunam area on New Phetchaburi Road (BTS Rachathewi, BTS Chit Loem). It’s a technophile’s and clothes shopper’s dream. Platinum Fashion Mall, Pratunam Market and their surroundings have plenty of discount clothing and tailor made items. Also in the area is Phantip Plaza containing floor after floor of electronics, computers, DVDs, and other IT products.

There are other notable shopping areas in Bangkok. Kao San Road is the place to get fitted out with beach and travel gear. Sukhumvit Road contains a number of markets and malls. The most impressive is the innovative concept mall, Terminal 21 (BTS Asok, MRT Sukhumvit) where each level represents a different country. The luxury mall Emporium, is for upper class tastes. Siam Paradise Night Bazaar (BTS Udom Suk, BTS Punnawithi) is a fun outdoor market with tasteful souvenirs and furniture. 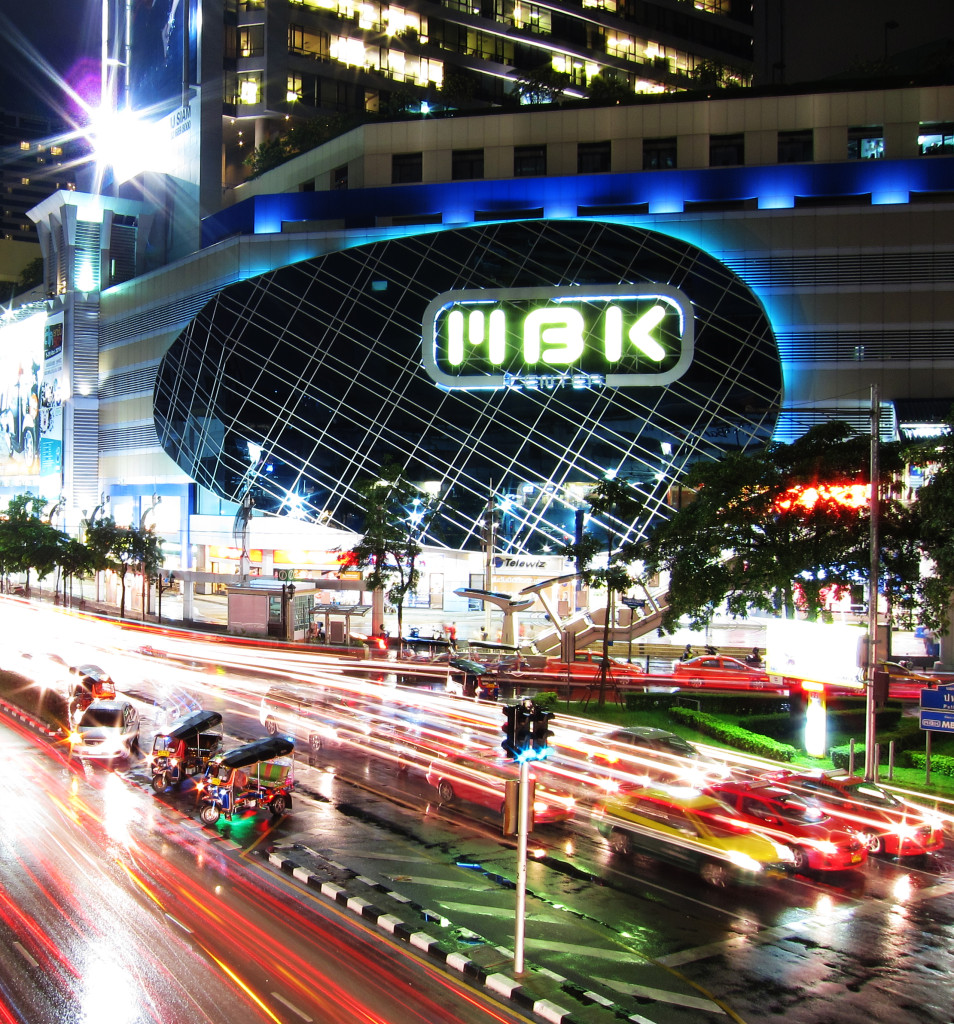 While some of the shocking stories about nights in Bangkok are true, the wild side of the city is usually exaggerated. The night scene can be divided into clubs, bars, street life, and red light districts[1].

Sukhumvit Road (BTS Ploen Chit to BTS Thong Lo) is the preferred night time destination for rich Thais and expatriates. A number of bars and clubs are found on and off its sois (side streets). The red light district of Soi Cowboy is preferred by men. Soi Nana and its surrounds are full of Middle Eastern fare, a street market, a red light district, and plenty of bars and street vendors. To the east of Nana are many more sois full of numerous establishments often catering to a western and Japanese clientele. Soi Thong Lo is known for housing plenty of upper class restaurants and bars.

The nightlife on Silom Road (BTS Sala Daeng, MRT Silom) has a mix of establishments for different tastes. The south side of Silom Road near BTS Sala Daeng has restaurants, bars, and street vendors. The north side of Silom Road near BTS Sala Daeng is home to a notorious red light district with streets catering to Japanese, gay men, and those with strange tastes. Here, one will find Pat Pong, famous for the bizarre and not so sexy “ping pong show.” However, Pat Pong also hosts a fairly normal souvenir market. Silom Road continues on towards the Chao Praya River, and after crossing Narathiwat Road is full of pleasant restaurants, bars, and street life.

For a thumping dance music scene head to RCA (MRT Rama IX), where you will find the greatest concentration of clubs in Bangkok. Most clubs do not allow sandals and shorts are questionable, but there are some casual bars located along the road too.

Kao San Road is the place to enjoy cheap drinks from street vendors or at bars. Every night of the week is a party on Kao San Road with backpackers from all corners of the world. Street performers are common but are often less entertaining than watching the antics of all the wide eyed and generally drunk tourists. For a more laid back atmosphere, head to neighboring Ram Buttri Road.

In the end, Bangkok has far more to offer than even the places mentioned above and is best experienced by exploring and getting lost in its sois.

[1] Keep in mind that red light districts in Thailand are technically illegal but maintained through corruption. Sex workers are sometimes pushy in their soliciting, and human trafficking is present.