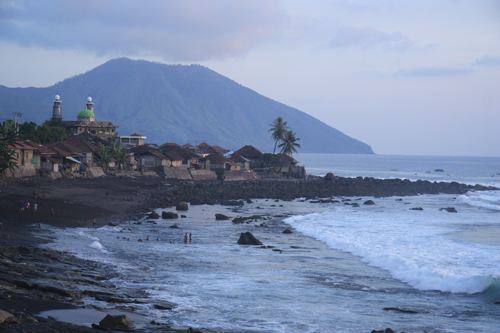 Flores: Island of Traditions and Ceremonies

The island of Flores is one of Indonesia’s emerging travel destinations. With Lombok’s international airport up and running, and a number of airlines offering regular flights to the Lesser Sunda Islands, the island of Flores has become easily accessible. It has many appealing attractions, active volcanoes and unique wildlife, but is also a place of unique local traditions. For Latitudes, Ed Caffin set out to explore this fascinating island.

“Flores is my island, and Ngada is my homeland. I am very proud to show you around”, says Johannes Berchmans with a gentle voice, smiling widely. What you will see the next few days”, he says, “is some of the best that Flores has to offer.”

From Bajawa, a small bus takes us through the Ngada countryside. Johannes, short and sturdy, takes a seat in front and grabs a shiny microphone. His colleagues, driver Alfred and ‘tour manager’ Emil, nod in turn as he continues his introduction. As the bus starts crawling up and down the narrow roads through the Bajawa highlands to the south, Johannes tells us all we need to know about traditional and contemporary Ngada lifestyle and culture, and more.

The Ngada people are a tribe that inhabit part of Flores’ south coast and the scenic highland area around Bajawa, the small capital of Ngada district. “All Ngada people used to live in small villages,” he explains. “For them, daily life revolved around farming and many cultural traditions and ceremonies. In my village, we still lead quite a traditional lifestyle, similar to that of earlier generations. But since recent years, we also have access to modern things, like cell phones and Internet”. 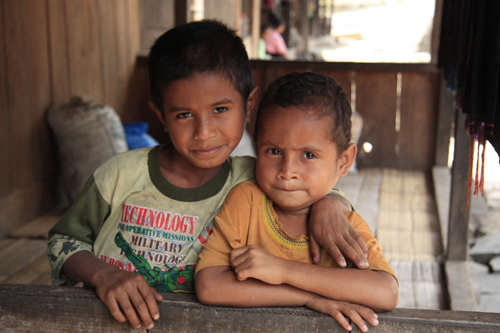 Children of Flores by Ed Caffin

I gaze outside the window. We pass through the base of the impressive Mount Inerie. The beautiful green landscape is dotted with small villages. While Johannes greets the local people we pass, I enjoy the spectacular scenery of the rugged shaped slopes of the more than 2200 metres high, pyramid-shaped volcano.

After some time, Johannes points at a woman and two little children on the right side of the road. “There are my wife and two little daughters!” Johannes cries. They smile proudly as the bus full with waving tourists approaches. On the other side, Mount Inerie looms over the family’s farmlands.

After a visit to the village, a scenic photo stop and some fruit from the market, we are on our way again. Next stop is Bena, a traditional village increasingly popular among tourists. Here, life still is organized around traditions and clan rules. Ancestors are honoured and offerings are made on beautifully constructed ceremonial bases in the village centre.

Although Ngada people originally only held animist beliefs, nowadays most of them are Roman Catholics, like Johannes. His was named after a 17th century Catholic saint whose name also features the Catholic seminary St. Johannes Berchmans in nearby Todabelu, Mataloko. Early in the 20th century Dutch Catholic missionaries built this seminary, and started working among the Ngada population. Most Ngada are Catholic now, but at the same time hold on to their local culture and beliefs. 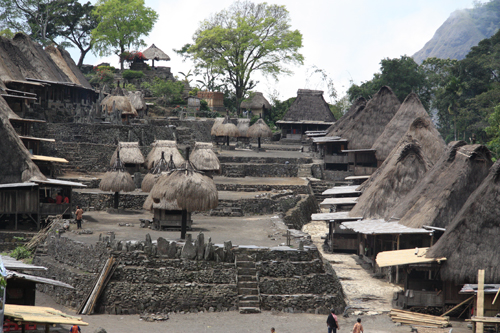 Through the instantly pouring rain we reach Bena, built against the flank of Mount Inerie. But as soon as we come to a halt, the rain stops. We are escorted from the bus up to a ridge at the entrance of the village. On the ridge, two rows of houses are lined up, facing each other. They’re all made from wood and topped with high thatched roofs.

In the spacing between them there are intricately constructed miniature shaped houses, built to worship the ancestors. Also, there are graves and megalithic structures. We walk all the way up to a large stone plateau at the outer ridge of the village. From high up the flanks of the mountain, rainclouds slowly tumble down towards the village. When the first warm raindrops fall, Johannes hurries us back to the bus and we are off for diner in Bajawa-town. 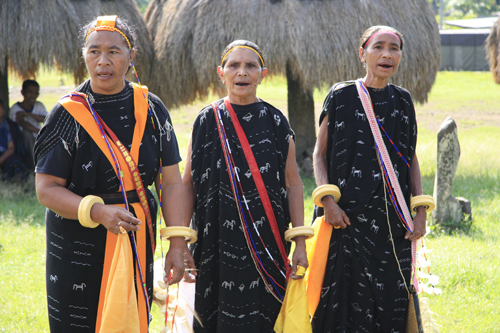 Women in Wakomenge by Ed Caffin

The next day, our bus leaves early. Driver Alfred takes us to Wakomenge village, a few kilometres from Bajawa. This traditional village is set beautifully against the backdrop of a dazzling mountain peak. Little children play between the memorial structures of their ancestors, while a group of older children and adults prepare for a ceremonial dance.

The group is dressed in black and yellow traditional clothes and carry wooden artifacts and musical instrument made of bamboo. When the oldest man of the group starts singing, the others create a circle around him, and begin to dance simultaneously to the rhythm of his songs. Together they perform a number of exceptional ritual dances about life and death, joy and sorrow.

After this captivating ceremony, we drive further eastward towards Ende, past Wogo and through the neighbouring district of Ngakeo. A few hours later, the highway reaches the southern coast of Flores at Nangoro village. 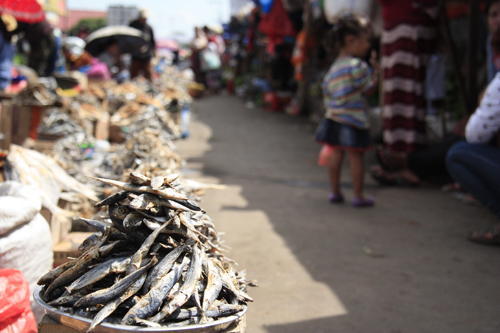 We make a quick stop at Nangapanda or Blue stone beach, where the warm tropical waters offer a welcome refreshment. As we swim, locals collect blue stones that are scattered around the beach. Once collected, they will sell them to local merchants, who in turn export them to traders on Bali and Java. From there, they make their way to boutiques and home ware shops.

After some time, Emil checks his watch and explains that a certain spot on the coastal road to Ende offers a stunning sunset we shouldn’t miss. “We will leave in another half an hour.” I sit back and relax and for a while, I quietly look out over the Savu Sea and Ende Island.

“The bus will leave in a few minutes”, a gentle voice behind me says suddenly. I get up and hurdle up the white sand and blue stone beach, back to the others. Silently, I make a promise to myself: I will come back to Flores soon. As if he heard me, Johannes stops besides me. “I think you like Flores!” he says, again showing his huge smile. I just smile back.

Many thanks to the Ministry of Tourism and Creative Economy, Jakarta