Home Uncategorized Abdication of Her Majesty the Queen of The Netherlands 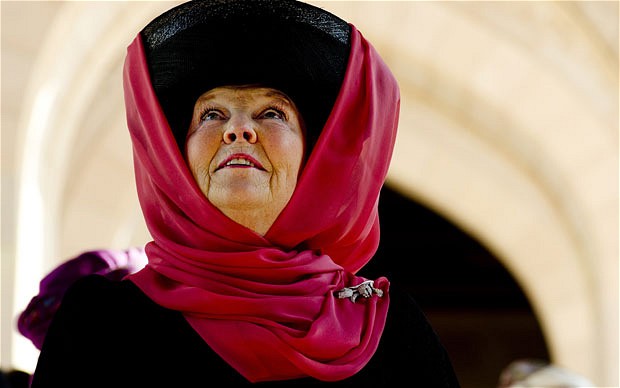 Abdication of Her Majesty the Queen of The Netherlands

10.00-10.30
Abdication of Her Majesty the Queen in the Moseszaal of the Royal Palace Amsterdam. Those present will include the Presidents of the Senate and the House of Representatives, the Council of Ministers for the Kingdom and members of the Royal Family, the governors and prime-ministers of Aruba, Curaçao and Sint Maarten.

13.50
Princess Beatrix and other members of the Royal Family proceed to the Nieuwe Kerk.

14.00
The King and the main cortege proceed to the Nieuwe Kerk.

14.00-15.30
Swearing in and investiture of the King at the joint session of the two Houses of the States General in the Nieuwe Kerk. The King will deliver an address and be sworn in. The President of the joint session, Fred de Graaf, will deliver an address and make a solemn declaration, after which members of the States General and the States of Aruba, Curaçao and St Maarten swear an oath or make an affirmation.

15.30
The King and his retinue proceed to the Royal Palace Amsterdam.

16.30-18.00
Reception for royal and foreign missions, dignitaries and members of the States General and the States of Aruba, Curaçao and St Maarten, Council of Ministers for the Kindom, the Council of State, governors and prime-ministers of Aruba, Curacao and Sint Maarten and the Corps Diplomatique in the Royal Palace Amsterdam.

19.30
The Song for the King will be performed in the presence of the King and Queen, prior to the water pageant. This will take place at the EYE Film Museum via a video link with Ahoy Rotterdam.

19.45-21.30
The King and Queen will take part in a water pageant with their daughters on the River IJ. They will sail from EYE Film Institute past the Oever Park and the ‘Kop van Java’. At several places along the route they will be treated to a festive programme, including a ‘mini Sail’.

21.30
Celebration, hosted by the Prime Minister on behalf of the Council of Ministers for the Kingdom.