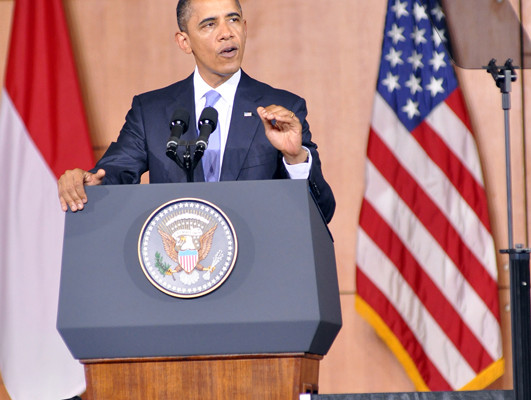 By: Dalih Sembiring and Emma Kwee

Obama in front of the Indonesian flag, by: Wisnu Leonardus

Obama cancelled his trip to Indonesia in March to help push the health care reform bill through Congress. He cancelled it again in June to deal with the oil spill in the Gulf of Mexico.

Now, the itinerary for US President Barack Obama’s visit to the country, part of his four-nation trip to Asia, brought him to Indonesia. His visit was cut short because of the ash clouds of the uncooperative Merapi volcano near Yogya, but he managed to make a lasting impression in a short period of time.

The usually overcrowded jam packed throroughfares of the capital were swept clean, on which Obama commented:

The landscape has changed completely since I was here in 1967. I remember people on becak or bemo, which were sort of like mobile taxis…Now, as president, I can’t see the traffic. The streets are blocked.”

This made the crowd of officials and reporters laugh out loud. The Jakarta residents were not as pleased, since the road blockade extended all the way to Jl. Sudirman, the city’s main thoroughfare. It was a taste of what life in Jakarta might be like if its roads were always as clear as they were made for Obama.

Indonesians looked forward to welcoming him back with an open heart, especially those who had come to know him personally when little Obama lived in Menteng, Jakarta. Others, however, expressed their intention to greet him with an organized protest. As his arrival on November 9 came nearer, Muslims from various corners of the archipelago, mostly from conservative hard-line groups, have openly expressed their aversion, calling Obama the leader of the nation that has singlehandedly killed so many Muslims in Iraq, Pakistan, Afghanistan and other Islamic countries, as well as a loyal ally to Israel.

The White House, however, has stated that the United States considers Indonesia, the country with the largest Muslim population in theworld, as an important partner in its efforts to reach out to Muslims everywhere, mainly in its global fight against terrorism. President Susilo Bambang Yudhoyono should be happy to report that the Indonesia has launched endless counter-terrorism operations in a number of provinces with success. An endaveaour surely appreciated by Obama. 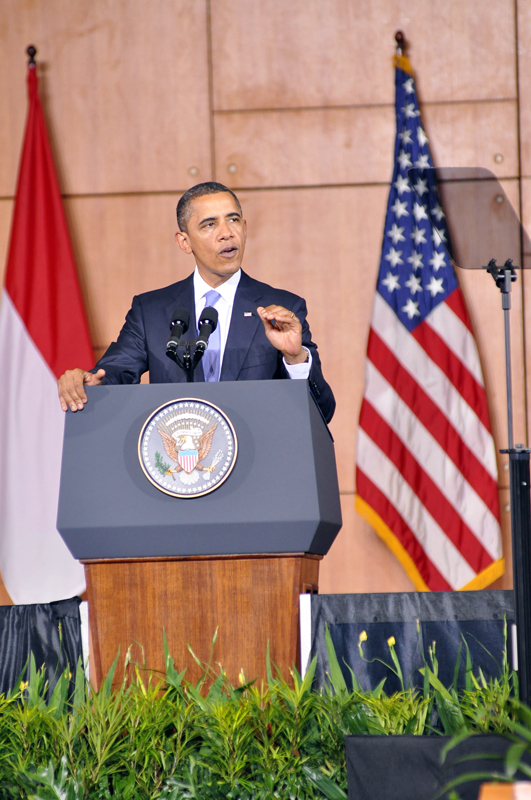 Obama's speech at the University of Indonesia, by: Wisnu Leonardus

A royal street food state dinner and a speech to remember

Obama’s Indonesian roots lie in the leafy area of Menteng, Central Jakarta, where he lived from the age of six to ten. During an interview with an Indonesian private television in March, the  US President said that he missed Jakarta’s street food that he had come to be familiar when he lived here, like nasi goreng (fried rice), bakso (meatball soup) and satay. Luckily the palace chefs did not hesitate to prepare Obama several courses of royal streetfood.

Obama rekindled his ties with Indonesia during the state dinner, and a subsequent speech at the University of Indonesia in Jakarta. More than 6000 people cheered the president on when he addressed the audience several times in Indonesian: “Pulang kampung nih?” Obama spend 4 years living in Indonesia when his mother married an Indonesian. “Indonesia is a part of me,” he said. His speech was filled with nostalgia and childhood memories, but also touched upon current matters.  He applauded Indonesia for its religious tolerance:

Because Indonesia is made up of thousands of islands, hundreds of languages, and people from scores of regions and ethnic groups, my times here helped me appreciate the common humanity of all people. And while my stepfather, like most Indonesians, was raised a Muslim, he firmly believed that all religions were worthy of respect. In this way, he reflected the spirit of religious tolerance that is enshrined in Indonesia’s Constitution, and that remains one of this country’s defining and inspiring characteristics.”

Obama tried to point out the similarities, instead of cultural and religious differences between the nations. He emphasized the need to work together to counter mutual challenges: “efforts to build trust and peace are showing promise but remain incomplete. Both sides can choose to either be defined by our differences and give in to a future of suspicion and mistrust or do the hard work of forging common ground and commit ourselves to the steady pursuit of progress.”

The themes partnership and democracy were returning topics in his speech:

Today, I return to Indonesia as a friend, but also as a President who seeks a deep and enduring partnership between our two countries. Because as vast and diverse countries; as neighbors on either side of the Pacific; and above all as democracies – the United States and Indonesia are bound together by shared interests and shared values.”

In conclusion it can be said that Obama gave an altogether positive spirited speech, that as expected didn’t delve deeply into any sensitive matters (Israel, terrorism), but was aimed at ‘forging common ground.’

The beginning of a renewed friendship?

What is the significance of Obama’s visit to Indonesia? Marty Natalegawa, Indonesia’s Foreign Minister, explained in the media time and again that the visit will mark the beginning of stronger ties between the two countries in a number of sectors, such as economics and business, politics, culture, interfaith dialogue, climate change, education, security and civil society. It will set the stage for the signing of the US-Indonesia Comprehensive Partnership agreement, produced in a meeting between Obama and Yudhoyono one year ago in Singapore.

In terms of economics and business, Indonesia will definitely benefit from the positive perspective the visit will bring  US investors, not to mention the environmental and naval deal rumors that have been circulating for some time.

This is why it was highly important for the Indonesian government to keep Obama and his family safe throughout their visit. For this matter, a joint security force consisting of 8,500 personnel were deployed to secure the Indonesian capital of Jakarta for six days, from Sunday through Friday. The personnel underwent counter-terror trainings and were backed by over 10,000 police officer from the surrounding provinces of West Java, Banten and Central Java.

One thing for sure, Obama’s ‘homecoming’  proved a solid and an altogether smart first step from the world leader who was heralded as a lost son in Indonesia.