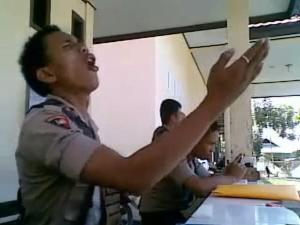 Norman has the X-Factor!

The term viral refers to videos that spread like wildfire. Clips that are so funny or shocking that people want to share them. ‘Sharing’ seems to be the magic word in this day and age, and that is exacty what we will do now: Share the top 3 viral videos in Indonesia!

1. Recently police officer Norman proved that policemen in Indonesia do in fact have a sense of humor. The video of him lip-syncing a classic Bollywood song was viewed 517,957 times when I last counted! Watch him sing “Chaiyya-Chaiyya,” a song by Indian movie star Sahrukh Khan, while on duty guarding a police post.

Unfortunately, his seniors didn’t approve of Norman’s X-Factor and suspended him. Millions of fans and family have since gathered at the police HQ to bribe the police officers with donuts.

2. This video of a 2 year old kid who was addicted to smoking (he smoked 40 cigarettes a day and started throwing tantrums if he didn’t), had shock value more than anything else. Ardi Rizal got famous for all the wrong reasons and his clip was seen over 11,488,245 times! (A lot of thumbs down for this one though).

Read more about Indonesia’s smoking habits in ‘Indonesia’s new year’s Resolution? Light another Cigarette’ to read how Ardi Rizal got addicted and what his father says about it.

Gayus Tambunan wearing his not so clever disguise, By: Indonesia Matters

3. This next clip that went viral is a music video, made by ex-convict turned musician Bono Paputungan, who served seven months in jail for domestic violence, has been viewed over 335,567 times.

The song is about Gayus Tambunan (see picture on right side), a former low-level tax official at the center of a corruption scandal. Gayus Tambunan was famously spotted at a Bali tennis tournament wearing a wig and glasses, whereas he should have been in jail awaiting his trial. It turned out he bribed his guard and while ‘incarcerated,’ he also managed to sneak off to Macau, Kuala Lumpur and Singapore, accompanied by his wife.

“I wish I were Gayus Tambunan”, penned by Gorontalo resident and former prisoner Bona Paputungan as a response.

“I don’t envy Gayus, I just thought, ‘Wow, he led such a great life, how cool it’d be if I were him’,” Paputungan told Reuters by telephone. Paputungan, who uploaded his song to YouTube before he was discovered by the mainstream media, has now performed on several TV shows wearing a similar centre-parted wig to the one Gayus donned in Bali.

“Living in prison was very hard for me,” he croons. “I became skinny because of thinking too much … If only I was Gayus Tambunan, who can go to Bali and had all his wishes fulfilled.”

Why do things go viral in Indonesia?

If you want to know what’s going on with digital media in Indonesia, you got to check out this video created by 4 students from Singapore Management University (SMU). In a nutshell, this video explains why Indonesia is the next big thing in digital media and  shares 5 big trends in the country.