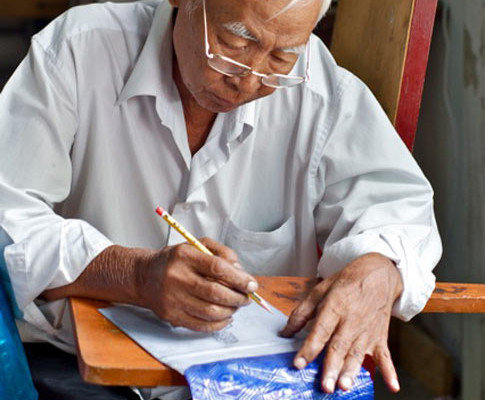 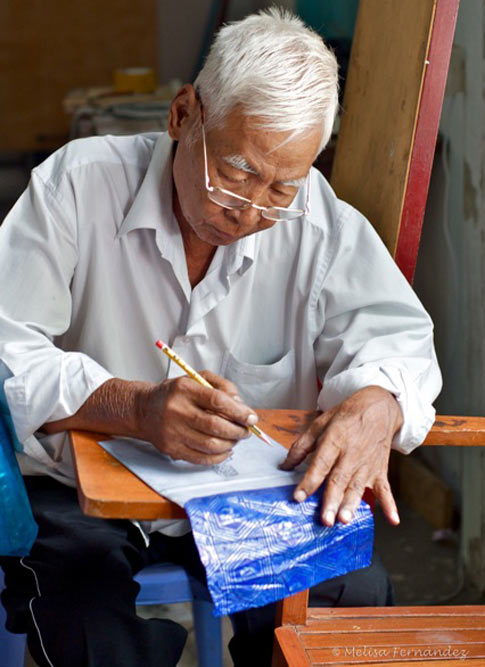 PHNOM PENH, Cambodia – As comatose Vann Nath’s lungs filled with water and family members pled for more donations to pay his $300 a day medical bills August 31 after the Khmer Rouge torture prison survivor and artist suffered a heart attack the week before, a very different story was playing out at the country’s UN-backed genocide tribunal.

That day, Nuon Chea, known as Brother Number Two to deceased Khmer Rouge mastermind Pol Pot, complained to the court that a medical expert who found him to be in good health to stand trial despite chronic health ailments was mistaken. He would then excuse himself 90 minutes through the international court hearing and retreat to a holding cell—complete with a TV, a fan, a living area, three meals a day, and medical care paid for by the government.

But 85-year-old Nuon Chea lived. And he was not alone.

Joining him in the detention center below the Extraordinary Chambers in the Courts of Cambodia were Khieu Samphan, Ieng Thirith, and Ieng Sary—the three other defendants in the court’s case 002.

As Head of State during the Khmer Rouge regime that ruled Cambodia from 1975 to 1979 and whose communist-style policies killed at least 2 million people by way of torture, executions, or starvation while laboring in the countryside as part of the government’s agrarian policy, Khieu Samphan, 80, was the face of the Khmer Rouge. 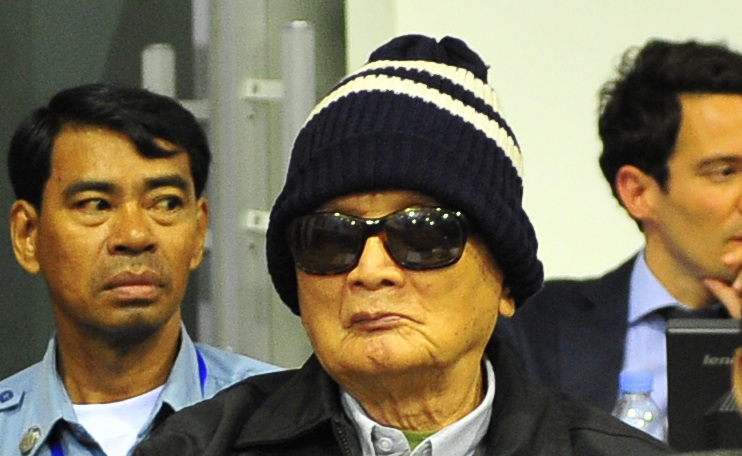 Nuon Chea, too sick to stand trial at the Extraordinary Chambers in the Courts of Cambodia?

Ieng Thirith, 79, was its Social Action Minister, and Ieng Sary, 86, her husband, was the Deputy Prime Minister and Foreign Minister. Together, they make up the last living top tier of the Khmer Rouge’s bloody rule; the senior-most leaders of the regime being brought to trial more than thirty years after the fall of their government by the Vietnamese.

Both Ieng Thirith and Nuon Chea are contesting their fitness to stand trial, their lawyers arguing they are too sick.

During hearings on August 29 to August 31 to assess the health of both the accused to stand trial, Ieng Thirith weaved in and out of consciousness before excusing herself from the chambers. New Zealand geriatrician John Campbell testified during the hearings that she was likely suffering from a form of dementia associated with Alzheimer’s disease that would render her unable to properly remember events or concentrate and answer questions during the trial.

But he said Nuon Chea, despite his heart problems, high blood pressure, and back pain, was perfectly fine to continue. 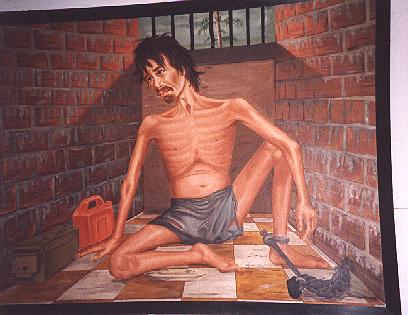 Vann Nath's paintings as they appear on the walls of S-21, now a genocide museum. Photo courtesy Andy Brouwer

“There has been no development recently…of symptoms that would interfere with his ability to participate here,” Campbell said August 31, the last day of health hearings.

What would the court do if they died tomorrow?”

The case is not officially set to be tried and witnesses heard until sometime next year. But with increasing health worries that come with their old age, many in Cambodia are questioning whether the accused will actually be sentenced before they die.

“How long would it take to conclude their trial if there is no end of continuous requests,” asked Khmer Rouge survivor Vann Yen outside the trial chambers, speaking to The Cambodia Tribunal Monitor. “It is very important to sentence them as soon as possible.”

Ang Moeun from Takeo province rhetorically asked a reporter from the Tribunal Monitor if the court could try the dead. 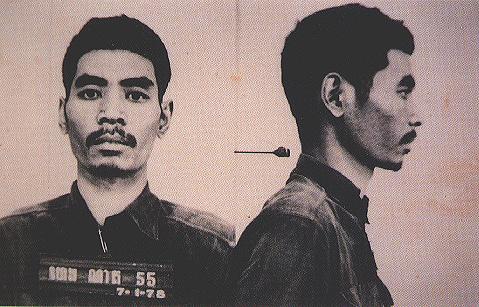 Mug shot photo taken of Vann Nath upon arriving to S-21, as it appears today inside the museum. Photo courtesy Andy Brouwer

“They are on trial, but I wonder when they will be finally sentenced,” Ang said. “Life is unpredictable. What would the court do if they died tomorrow? And how could the court persecute the dead? Could the dead answer questions?”

Extending now into its fourth year and with only one of the four cases completed, the tribunal has been beset by trouble from the beginning.

After years of delay, Cambodian Prime Minister Hun Sen finally gave way in 2003 to international pressure to hold a trial.

In 2008, the court’s then-Cambodia-staff director Sean Visoth stepped down after mounting criticism of his instituting a kickback system that netted tens of thousands of dollars each month. 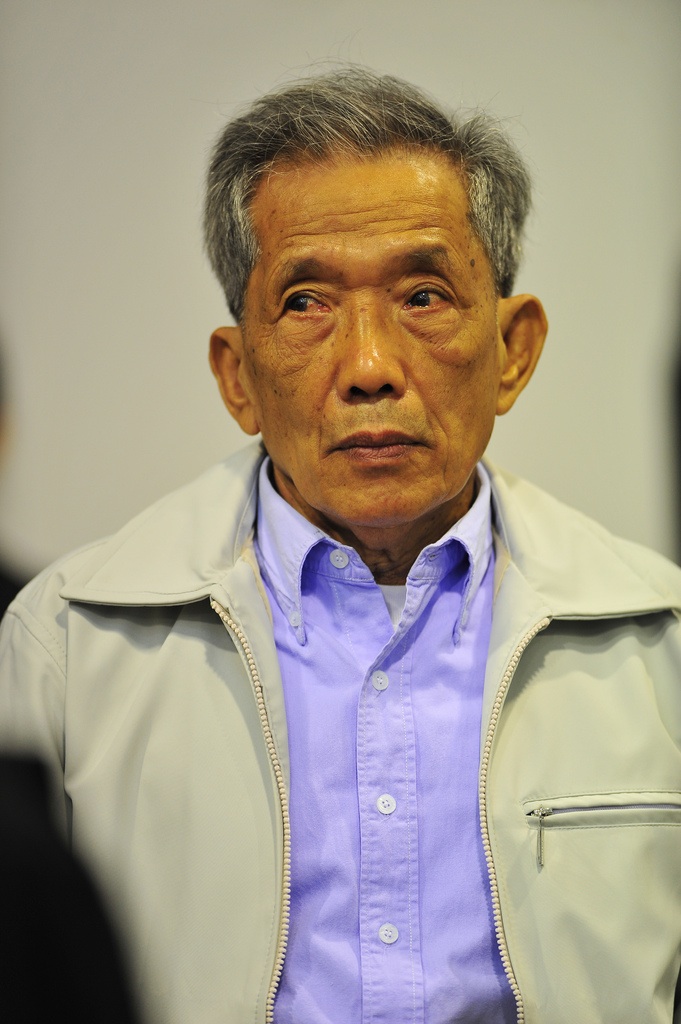 The first of the cases to be tried, in 2009, was that of 68-year-old Kaing Guek Eav, alias Duch, the head warden of the Khmer Rouge’s most notorious torture prison, S-21, an old high school inside Phnom Penh.

Out of more than 14,000 men, women and children tortured there before being executed on the outskirts of the barren city, Vann Nath was one of seven prisoners that walked out on both feet—Duch kept him alive to paint portraits of Pol Pot, who died in 1998.

Testifying at Duch’s trial, Vann Nath wept as he remembered the cruel treatment of him and other prisoners, shackled at the feet, their hunger forcing them to eat insects that fell from the ceiling.

“I felt very hungry at the time, and it was the most hungry I’ve ever been in my life,” he told the court. “Even had they given me the flesh of a human being, I would have eaten it.”

While Duch was sentenced in 2010 to 30 years—12 of which he had already served—his lawyers have appealed the court’s jurisdiction to try the case at all, the tribunal’s legal communication officer Lars Olsen said. A decision on the appeal is expected by the end of the year, adding yet another layer of pain to victims of the regime waiting for any semblance of justice. 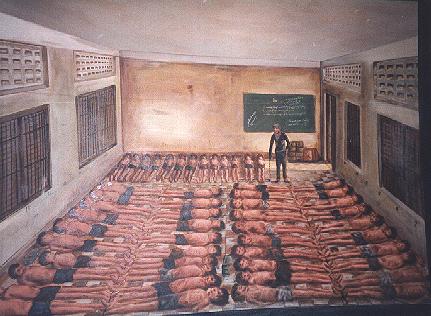 Another painting of Vann Nath on the walls of S-21, now a genocide museum. Photo courtesy Andy Brouwer

To make matters worse, the tribunal’s international co-prosecutor Andrew Cayley in June issued a formal complaint against the court’s premature closing of investigation into case 003, meant to try second-most senior leaders of the regime. Critics have argued tribunal judges will treat case 004, involving two former Khmer Rouge officials, one of whom is now a wealthy businessman and the other a commune chief, similarly. The issues reached fever pitch when accusations of government control and a lack of judiciary independence led UN Secretary General Ban Ki-moon to declare his support in the tribunal, issuing a public letter titled “United Nations Rejects ‘Media Speculation’ That Judges Received Instructions.”

Hun Sen has publically stated that this case 002 will be the last to be heard.

On top of that, the court early this month found VOA in contempt of court for including snippets of a leaked confidential court document in a news feature.

I came here to see his face”

Whatever the court’s biases may or may not be, most Cambodians have little opinion about the convoluted litigation occurring in the court. Even if the defendants serve three years—less than the four years 14,000 people spent crammed in S-21 before being hung from gallows or having their skulls smashed with the back of an ax—many will be satisfied. 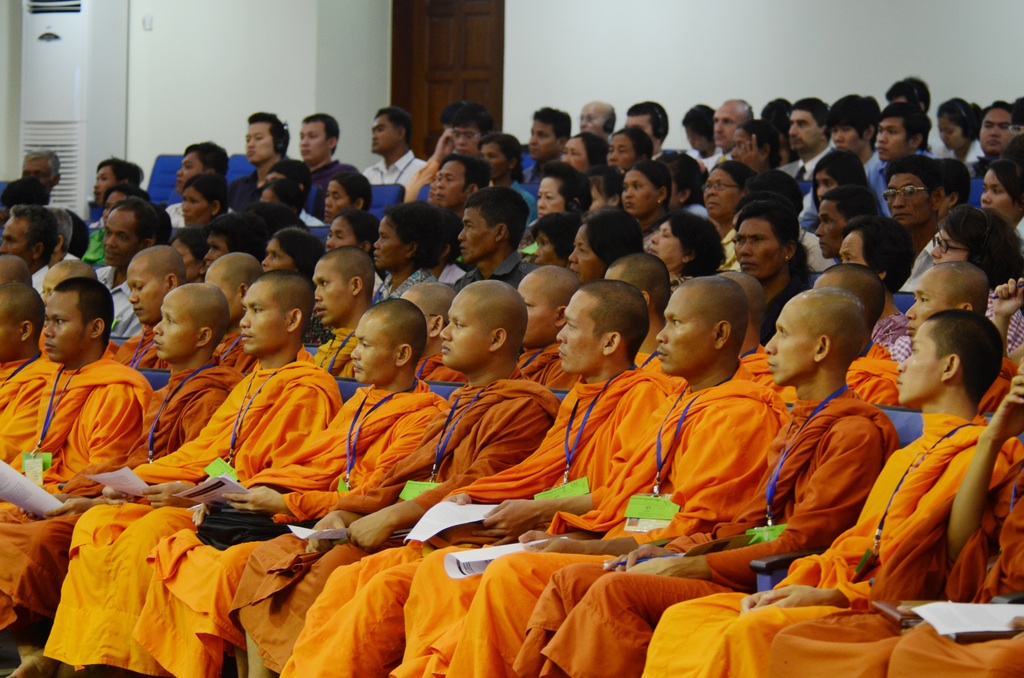 Cambodians witness the trial in the ECCC in the hope of justice, By: ECCC

“No matter what sentence term the court decides, for example, three-year imprisonment…or whatever, it will bring somewhat closure to the victims died, as long as they are finally sentenced,” Ang, the man who asked if the court could try the dead, said.

But as the days turn into months, and months years, changing seasons leave many to hope that the Khmer Rouge architects who have escaped death decades longer than their thousands of victims won’t thwart justice so easy.

Speaking outside the chambers of the latest trials, 73-year-old Chea Poahuoy trembled as she spoke to a reporter from The Tribunal Monitor of taking the law into her own hands.

“I came here to see his face,” she started. “If I were permitted, I would slaughter him [Nuon Chea] with a stick just as he did to millions of people executed at his hands.”