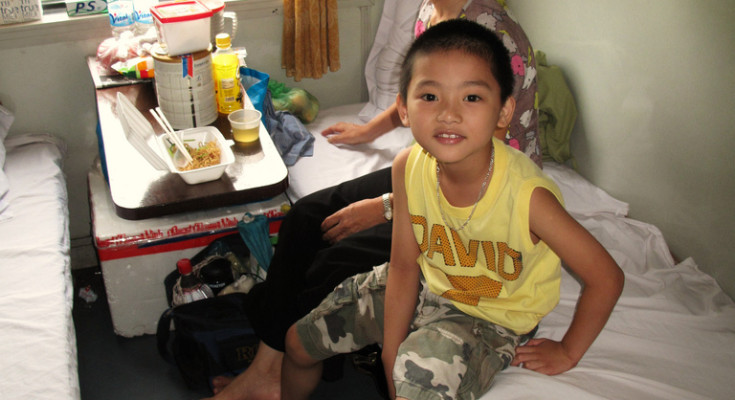 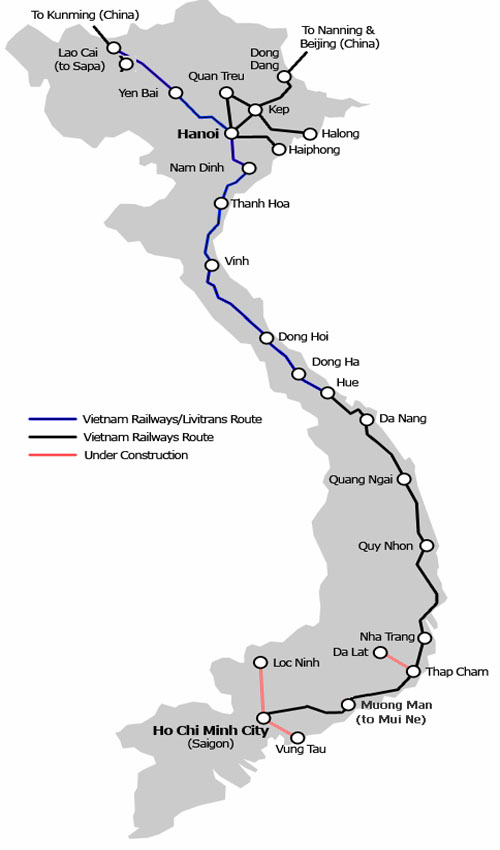 They sometimes call it the ‘Reunification Express’, the train that connects Hanoi in North-Vietnam to Ho Chi Minh City in the south. And it it’s without any doubt one of the best ways to get to know Vietnam and one of the best train journeys you can make in the former Indochina.

“Why would you take a train when there’s a night bus?” one of my friends asked when I told him I was about to take the train from Hanoi to Nha Trang. “The bus is more comfortable than the train and it’s faster.”

Good question. Why take a train in Vietnam when there are so many bus companies? And why take a train when there are so many cheap budget flights connecting one city to another? The answer is quite simple: it’s the best way to get to know the country in a short period of time. That goes for any country that has trains and it certainly goes for Vietnam.

My plan was to take a train from Hanoi all the way down to Ho Chi Minh City (HCMC). Each day at least four trains leave from Hanoi (more at peak times) to embark on the 30 to 34 hour journey to get to HCMC. Due to circumstances I had to get off at Nha Trang, but that was only 400 kilometers from the end of the line and good for 26 hours of traveling. Enough to know how it feels to be in the ‘Reunification Express’.

Train Travel in Vietnam, a Seat or a Berth?

Taking the train in Vietnam usually gives you different options of comfort. First there’s the choice between buying a ticket for a sleeping berth or a seat. If you’re doing the whole route from Hanoi to HCMC it’s wise to choose a sleeping berth, because sitting in a chair for more than 30 hours isn’t that great. With the berths you choose between the hard sleeper and the soft sleeper. Both of them have ac in the cabins, but the soft sleepers are more comfortable and more spacious (four beds in a compartment, instead of six). When it comes to seats there’s the choice between soft seats and hard seats. You might want to take the soft seat, because the hard ones are made of wood and hence really hard, especially when sitting in a train for more than just a few hours.

The Reunification Express at the Hanoi train station

Because I made the journey from Hanoi to Nha Trang in two different stages, I bought myself two tickets. One soft sleeper from Hanoi to Da Nang and, after staying in Da Nang for a few days, a soft seat from Da Nang to Nha Trang. Both of them were good. The beds are a bit small for tall western people, but will do. Also the compartments are clean enough, the AC will make sure doesn’t get too warm (it might even get a bit chilly) and blankets are provided. If you’re only traveling by day time the soft seat is perfect. It really is soft, it gives you a great view of Vietnam’s landscape and it’s a perfect way to see how Vietnamese people travel and live. 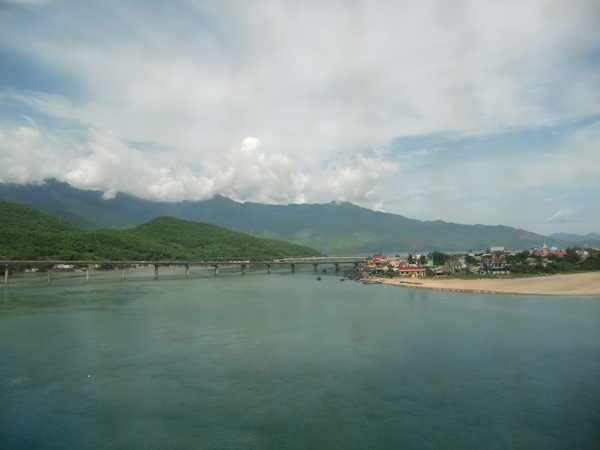 Views from the train in Vietnam, By: Ate Hoekstra 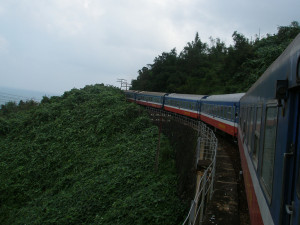 The reunification express in action, By: Stan Dalone 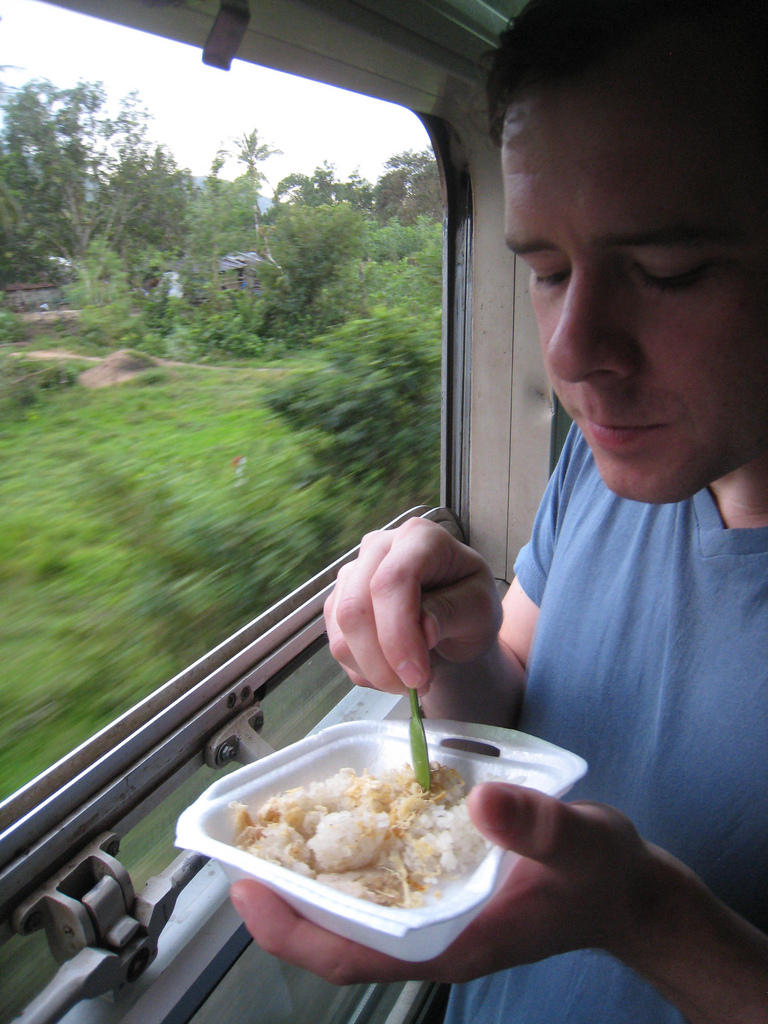 Making the best of train food, By: Brian Johnos & Kantner

Drinks and Food on the Train

One of the nice things about the Hanoi – HCMC train is that you don’t need to bring any food or drinks. Of course you are allowed to bring as much food as you want and that’s exactly what a lot of Vietnamese people do. But there’s enough food available on the train. In the evening you can get yourself a bowl of soup, in the morning and in the afternoon train vendors sell rice with chicken. It’s not the best food in the world, and for sure not the best food in Vietnam, but it’s cheap and it fills. And if you don’t like it, you can buy drinks and instant noodles on the train. Or wait until the next station, because there’s usually enough time to get off the train to get a quick bite at a station. 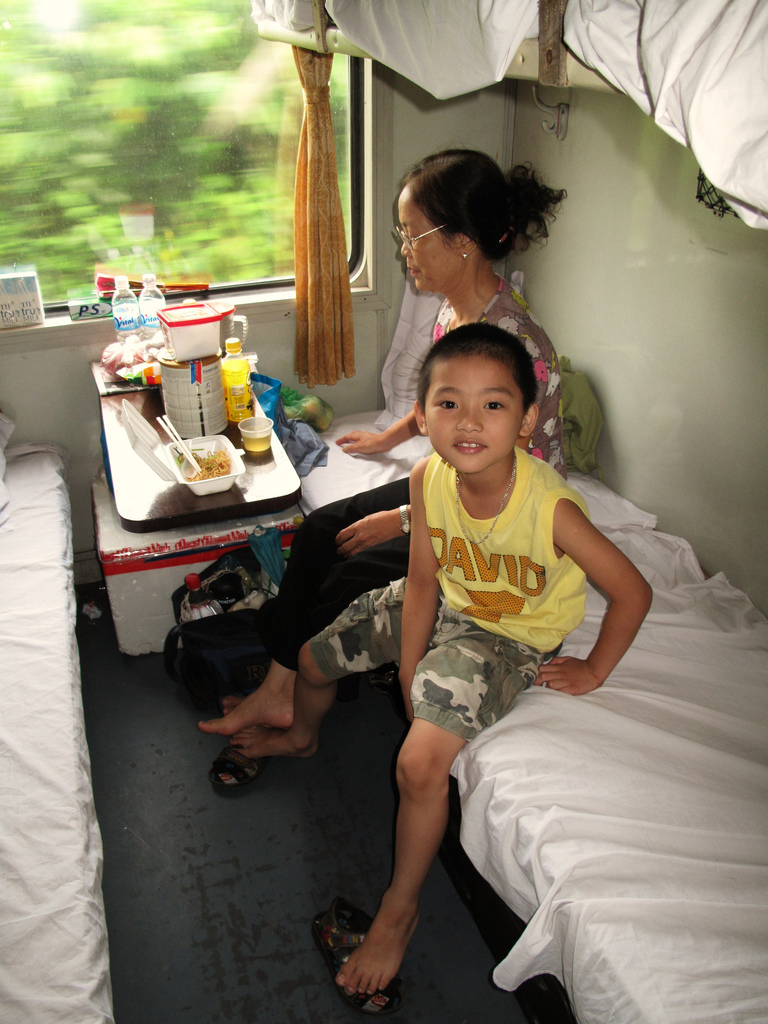 Making the train your home, By: Francisco Anzola

It’s all about the Experience

So the food is alright, the soft sleeper is good and the seat is perfect, but in the end those things are only small – but essential – parts of the experience. And the experience, that’s what it’s all about when taking the train in Vietnam. It’s a perfect way to get to know the country and its culture a little better in a small period of time. Vietnamese people make the train their home, even when it’s just for a few hours. They bring their family, they bring loads of food and it seems like they feel at home from the first moment they enter the wagon.

Then there’s the fabulous view. The landscape between Hanoi and HCMC is beautiful and diverse. During the daytime I saw endless rice fields, rocky mountains, small villages, high cliffs and sunny beaches. It gave me a glimpse of Vietnam’s daily life, watching the motor bikes, the field workers and the people who wait at the stations for something to happen. Of course, taking the ‘Reunification Express’ is by far not enough to get to know Vietnam, but it gets you much closer to the people and their culture than a budget flight can do. And it’s a much more fun, safe and relaxing way of travel than to hop on one of the overloaded, crazy driving busses.

If you want to know the current prices and schedules, be sure to check www.seat61.com/Vietnam.htm. Train tickets can easily be bought in most hotels and guesthouses or at the stations. Prices vary on which berth or seat you take, but to Western standards it never gets expensive to take a train in Vietnam.