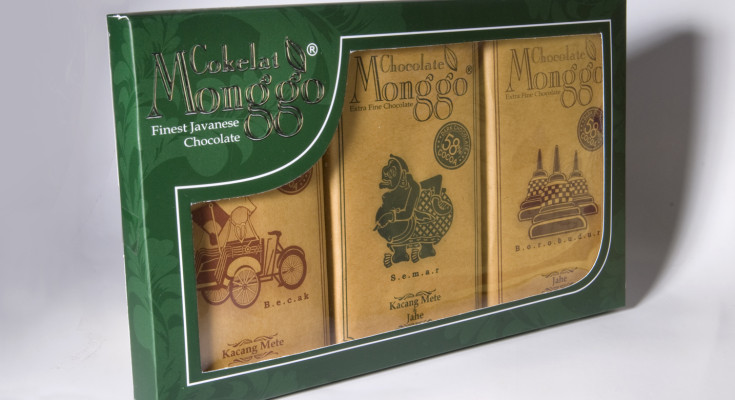 Thierry and the Chocolate Monggo Factory

What do you get when you mix a Belgian man with Jogjakarta, the love of chocolate and a sprinkle of determination? Monggo is what you get. Some of you may have spotted ‘Monggo’ chocolates at your local supermarket and sampled its sweetness, but the story behind its success is bitter sweet.

This tale’s version of Willy Wonka is Thierry Detournay, who interestingly enough had no previous chocolatier experience and is instead trained as a social worker and psychologist. Upon his travels of Southeast Asia in 2001, Thierry decided to try his luck in Indonesia. He ended up in Jogjakarta and due to its lower cost of living, remained there to this day.

“At the beginning I did nothing really,” he admits. “I did some activities with street children to keep myself busy.” So where on earth did the idea to start making chocolates come from? “When I used to go shopping I could only find terrible chocolates in the supermarkets. One day I made truffles for my friends and they loved them, so that’s how it all started!”

Thierry would drive his pink Vespa to the Sunday morning market at UGM (University Gajah Mada), put a table-top on his bike, pop a cooler box on top of it, setting up shop right there and watch his chocolates fly. The response from the public was huge, so the idea to take chocolate seriously began. In 2002, Thierry rented space to open a little shop with antiques on display, but after a few months of being open, the first Bali bombing happened, which cleared the streets of Jogjakarta, too. “All tourists ran away from Indonesia. You could see tumbleweed in the streets!” 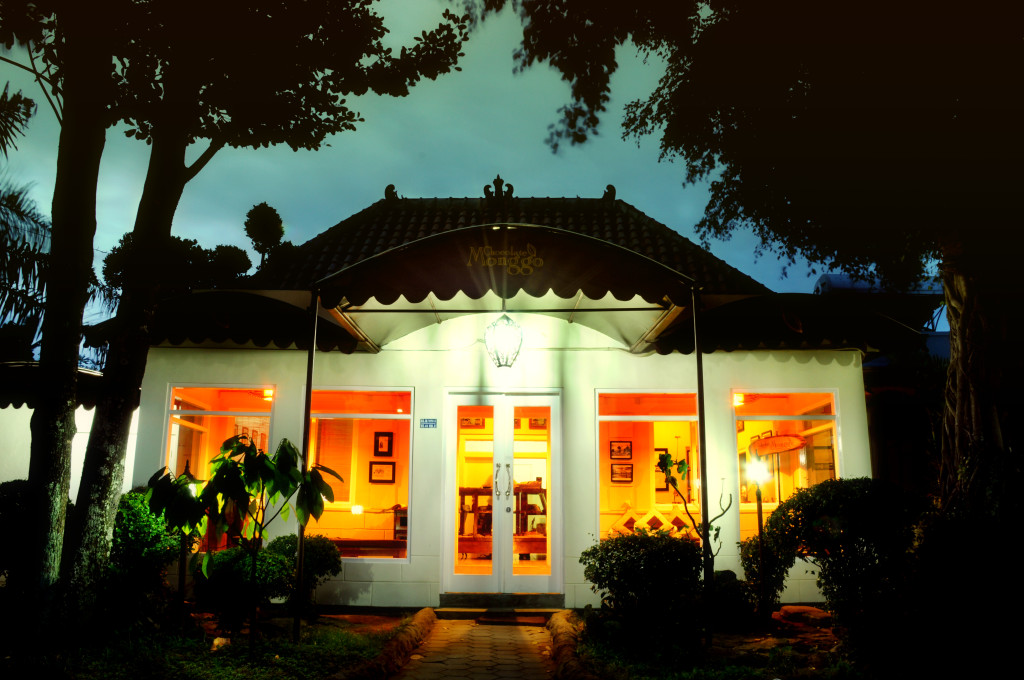 The Monggo chocolate factory in Kotagede

Just when Thierry had decided there was no chance in succeeding, Lembaga Indonesia Perancis (LIP) gave him permission to open a café in their garden. At this point, Thierry needed someone to be his Indonesian business partner, so he joined hands with local man, Edward Riando (or Edo as he likes to be called), and opened up “Couleur Café”.

Things were going well until LIP hired an inept Director, which led to its demise. They shut shop and rented a house to start a new chocolate range called ‘Cocoa Mania’ which was going to be targeted at younger consumers. Another obstacle arose when they were unable to register this name due to an existing brand, so the brainstorming for a new name began. The name ‘Monggo’ was conjured up by their designer and as soon as Thierry heard it, he thought it was perfect. “It’s a Javanese word that means ‘Please, go ahead’. It’s friendly and welcoming.”

The principles of Monggo are simple, yet effective. Their chocolates contain no preservatives and are made of pure cocoa butter, with no fat. Real chocolate may be more expensive, but it is of a much higher quality. Packaging is recycled as Monggo are trying to set a standard for other companies to follow in Indonesia.

Thierry tells us, “We avoid plastic as much as possible and use only acid-free paper which does not come from tropical forests. At our factory we use solar panels to heat and all produce is local to keep our carbon footprint small.”

As business was finally on the up, another obstacle hit the Monggo empire, and Jogjakarta – the big earthquake of 2006, which killed thousands and misplaced thousands more. Monggo’s production house was badly damaged, along with Thierry’s home and five of his staff members. Production stopped altogether as homes were rebuilt, collecting donations from friends abroad, and a new factory wasn’t opened until 2007 in Kota Gede (also known as Pasar Gede), which is an archaeological site containing the remains of the Kraton (palace), the royal cemetery and royal mosque of Mataram, dated from the late 16th and early 17th centuries.

This chocolate factory is unlike any other – set inside an old Dutch colonial house, “It makes sense when you see it,” smiles Thierry. “We get lots of visitors now, mainly from Jakarta. It’s in the old city, so it makes for a nice day trip, combining our business with the story of Kota Gede.” 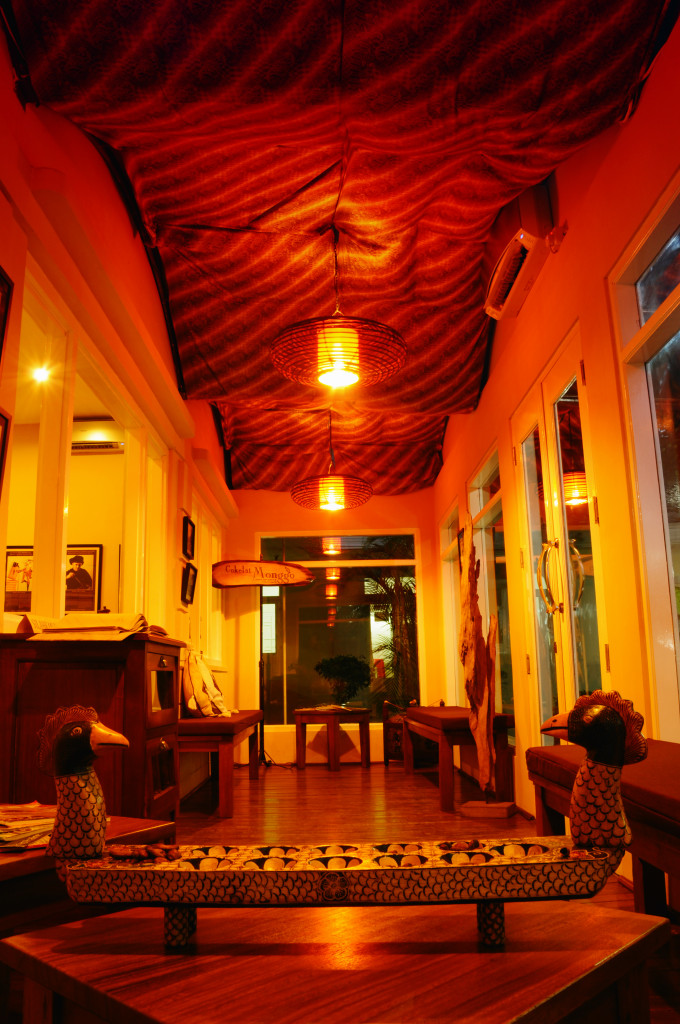 Inside the Monggo factory, chocolate heaven?

So how did word spread about Monggo? In 2008, two years after the earthquake and one year after the new factory opened, sales were higher than they’d been before and Monggo chocolates had became the new oleh-oleh. Celebrities promoted the product and the TV stations followed. Up to now, TV crews still come to film at the factory. Monggo now has around 100 staff and a branch office in Tebet, Jakarta and the range of chocolates has 12 flavours including cashew, macedemia, strawberry, orange, ginger, chilli, and durian (hmm… not too sure about this one…).

“We still have the pink vespa,” Thierry laughs, “as well as the VW Kombi that we used to drive all around Java in to sell our products!”

“We did everything ourselves,” says Edo. “The marketing, admin, accounting, you name it, we did it!”

Thierry admits that they weren’t businessmen, therefore mistakes were made, but life is a learning curve, so no matter what they were faced with, they carried on. Thierry told me of a great Japanese saying that goes, “Fall seven times, stand eight times.” And as Willy Wonka said, “Invention, my dear friends, is 93% perspiration, 6% electricity, 4% evaporation, and 2% butterscotch ripple.” Yes, that’s 105%, but really, who’s counting?