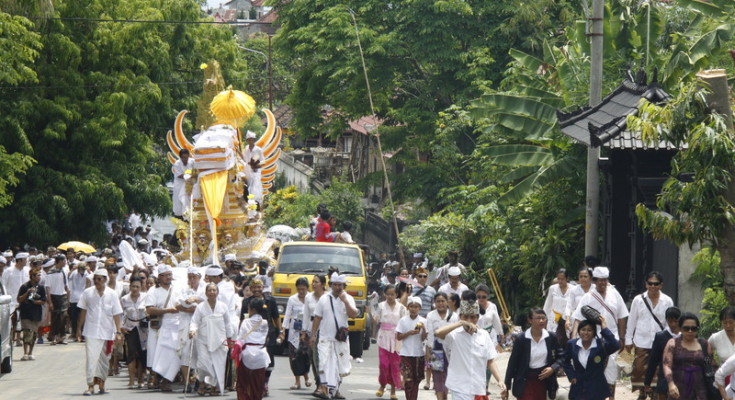 The Unsettling Proximity of Death on Bali: Fierce Fire and Cool Bones

The first time I witnessed a ritual washing of the corpse, it was a rather confrontational experience. However, that was not the only time, I felt uneasy. But before I come to that, let us first have a look at what happens after the ritual washing: the sequence of a cremation. 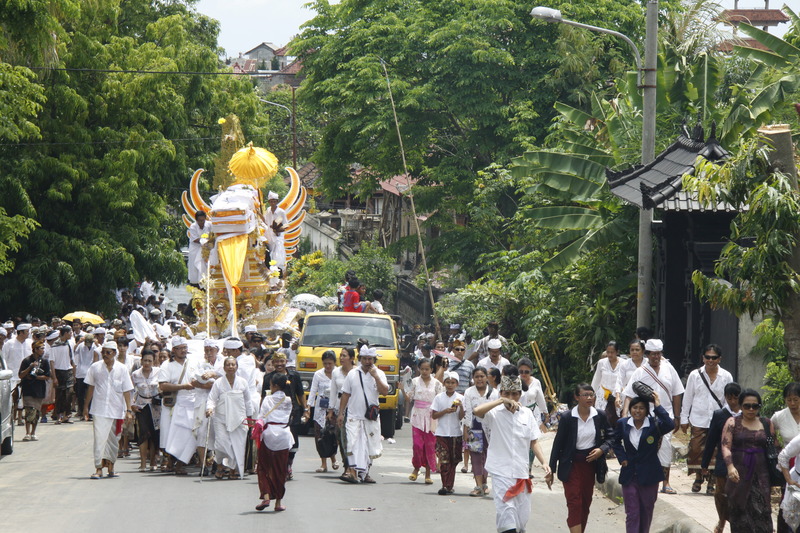 On the way to the setra, By: Sita van Bemmelen

On the day of the cremation, the chest with the remains of the deceased will be brought out of the family courtyard and put in a container (wadah) placed on the side of the road. That container can be an elaborately decorated and multistoried tower, for which Balinese cremations of royal families are so famous. But often it is a much simpler affair. The wadah will be hoisted on a rack made of bamboo and carried to the cremation field called setra by as many men as needed, depending on the weight of the tower. They can number up to a hundred men. Usually the wadah is brought to the setra around mid-midday, so one can imagine how heavy the task of the bearers is.

For the latest cremation in my family-in-law, we hired a truck with a water tank to cool the profusely sweating men off by giving them an occasional shower. Nevertheless, they nearly succumbed half way. We held our breath: “For God’s sake, don’t let the wadah topple!” Fortunately, because other men quickly rushed in to steady the bamboo rack, this disgrace could be averted. 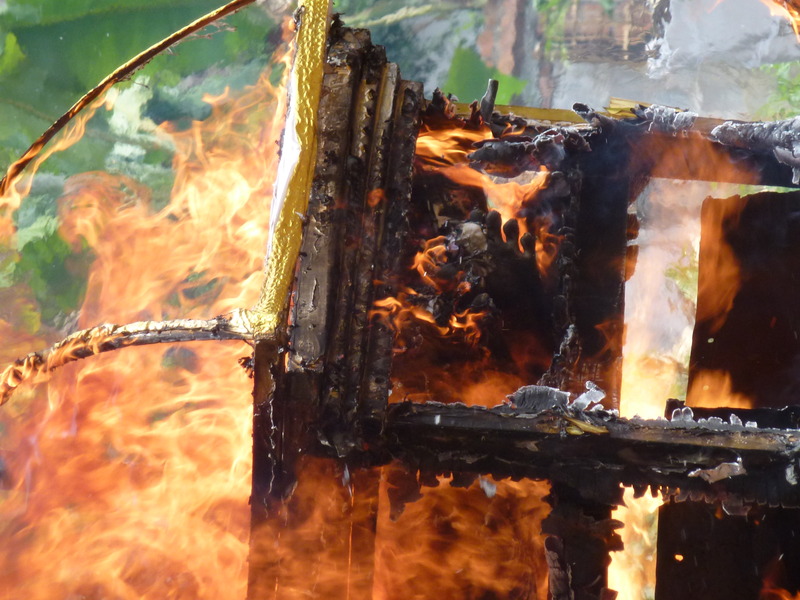 Fire devours the chest and envelops the corpse, By: Sita van Bemmelen

Once arrived at the setra, the chest with the deceased is lowered from the wadah and carried to the place prepared for the cremation. Then the lid will be opened and the priest will sprinkle holy water and flowers on the body. This is also the last opportunity for relatives who have been unable to attend the ritual washing to look at the deceased’s exposed face. Then everyone withdraws from the site. In step the men in charge of the  incineration, using a gas container attached to a pipe placed in front of an iron rack  on which the chest is placed, flanked by plates of corrugated iron. Whoosh! The merciless sound of outpouring gas initiates the first flames. In no time, fire devours the chest usually made of plywood and starts enveloping the corpse.

The first time I witnessed a cremation, I was completely taken by surprise when the skull burst with a loud bang while the corpse was consumed by licking flames. It happened right in front of my eyes and I was horrified!  The rawness of it left me speechless.

Over time, however, I have become accustomed to the sounds and sights involved in the process of incineration. An arm or leg may suddenly come alive, lifted upright when the air in the joint escapes. The sight of a skeleton emerging when the flesh has been consumed; I do not feel bothered by it anymore. My perception has changed: “Why should I be squeamish about this? Is it not the fate of the deceased to return to ashes?”  In a way, the Balinese cremation conveys a powerful message to the living: the life of the deceased has ended undeniably and irrevocably. There is a crude honesty in a Balinese cremation that I have come to appreciate.

After the body has been incinerated, – which usually takes two to four hours – and the gas pipe has been closed, buckets of water are poured over the ashes. Relatives come close and, on their hunches, pick up small particles of white bone, still warm in the midst of the steaming black ash. One should only take out a few pieces; one should leave some for others to take out. What is left of the bones is put in a woven basket, washed clean and then wrapped in a white cloth and covered with flowers. This bundle is then put in a silver bowl that is brought to the stand of the cremation where meanwhile another, small wadah has been placed under a moderately adorned canopy.

By this time, it is usually late in the afternoon. The sun has started to set, casting a soft glow over the cremation field. Everyone looks for a place to sit for the last prayer. The priest sitting on a platform utters prayers, the clear sound of his or her bell filling the air. Hands are folded in front of the stirn, holding a flower or small offering between the tips of the fingers. Then silence. Hopefully, the deceased will find peace in the hereafter.

After this, the small wadah is brought to the closest river or the sea and thrown into the water. By then, everyone is exhausted, not in the least because one has walked for miles during this day, from the house to the cremation field, from there to the river or sea, and back to the house again, all the while suffering the suffocating heat during the hours of the cremation. 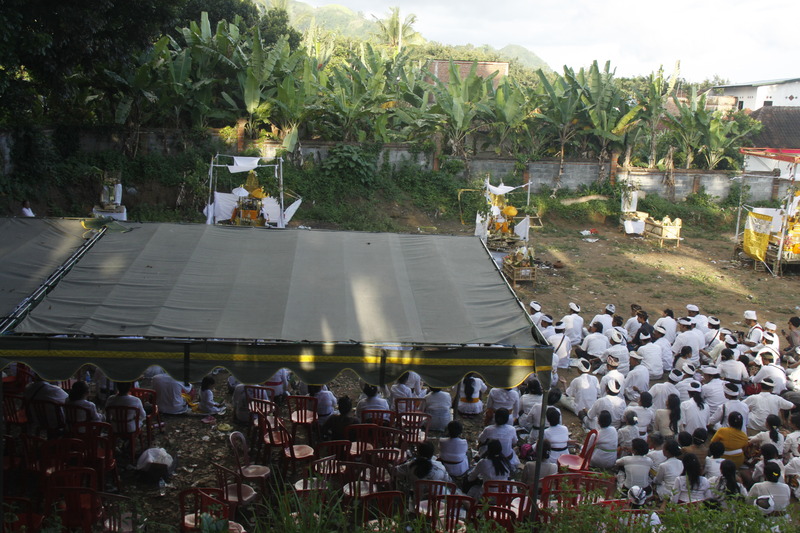 The final prayer that concludes the ceremony, By: Sita van Bemmelen

But everyone is satisfied: collectively they have done nothing but their very best to ensure the soul of the deceased a higher form of being in its next life. The length of time, labor and money the Balinese devote to the cremations of their dead, may be baffling and even may seem irrational in modern times. But despite the fact that it is in part a show of status, the closeness to the deceased and the intensity of it all are truly endearing and profoundly soothing.