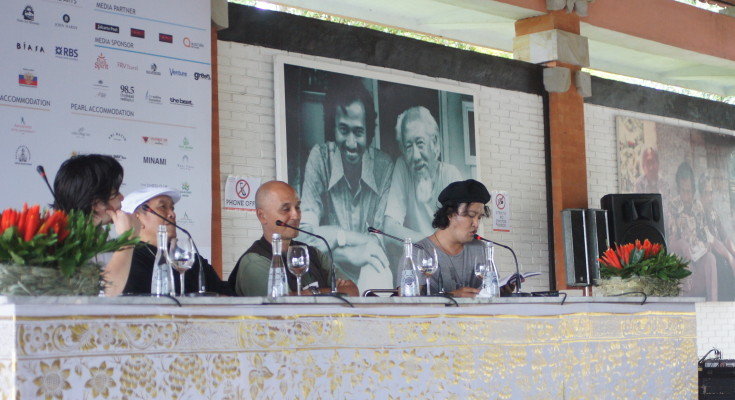 The Ubud Writers & Readers Festival is a yearly event that brings pen handlers, readers and critics from all over the world to Bali. Arriving in Ubud, the banners on the side of the road, suggested that this is no intimate tea party, but an extremely well organized festival. The program I leafed through incessantly during the day only furthered that impression. From 5 until 9 October over 40 venues in and around Yoga capital Ubud are the scene of seminars, panel discussions, book presentations, workshops and art performances/exhibitions.

To name a few examples, what to think of a workshop on travel writing? Or a discussion on colonialism and its effect on literature? Or sharing a three course rice based meal with Anthropologist Stephen Lansing, who has been researching the cultivation of rice and the intricate subak irrigation system on Bali for years? There is so much to choose from, we felt bedazzled amidst it all!

Today we joined a wonderful panel discussion about “The cycle of rice”: how the traditional subak irrigation system in Bali is based on sharing and maintaining balance, while ongoing development yearly turns close to 1000 hectares of Balinese rice paddies into villas and resorts. This is a very current, multifaceted and complicated matter, that Yvette Benningshof will delve into further.

After that we went to a panel discussion involving three heavyweights in Indonesian literary/arts circles: writer Andrea Hirata, who wrote the bestselling  novel Laskar Pelangi (Rainbow Troops 2005), dramatist Putu Wijaya and photographer Rio Helmi. The subject matter was the multi-interpretable slogan of this years’ edition of the Ubud Writers and Readers Festival: Cultivate the Land Within (Nandurin Karang Awak in Balinese).

The panelists narrated the profound connection they have with their ‘land’, their birthplace, their hometown, adopted cities and revered motherland. Andrea Hirata, who uses his home ‘village’ on Biliton often as a setting for his novels revealed:

Usually people say that if you create some distance with your home country, everything becomes easier and easier to describe. Maybe if I hadn’t left, i couldn’t have written my novels.”

Rio Helmi on the other hand comes from a very mixed background (his mother is Turkish and his father Indonesian) and told the audience he is fascinated by how different people and different cultures see their land. He likes the way he can switch between cultures, because he is from a mixed background. His photography is about seeing people his way and sharing that with others.

Putu Wijaya was born in Bali, but doesn’t feel Balinese. Dramatically he stated:

I am a contaminated Balinese. I like western music and western films. I spend most of my time in Yogyakarta or Jakarta. But the whole time I am away, I think of Bali. I think I’m cursed to be Balinese.”

The Indonesian saying “kacang lupa kulitnya”(the peanut forgets its shell) doesn’t seem to hold true for either of the panelists. Each has his own way of connecting with land and home.

Rio Helmi sees it more like traveling through a landscape, instead of having a land within oneself. According to him it is in the heart and in the mind where you create home. He recalls an occasion when he was in a boat with a Buginese father and son. They were arguing about where the coral reef was in regards to the boat. The father said: “It is there, 15 feet from here. I can smell it I can feel it.” The son disagreed and they kept on arguing. So Rio took out his flashlight and there it was, just as the father had said. he had felt it and smelled it. That is what cultivating the land within is.

The biggest change he has seen in Bali is in the attitude of the people. “People used to be contented with their lives. I am not saying they were enlightened or anything, but they were happy with the way things were. But now, everybody on this island is in search of something, of a dream, grasping and searching. The biggest disputes on Bali are about land, there are heritage claims, family arguments and so on.”

Once again the land issues on Bali seemed to rear their ugly head, an issue we will surely pay closer attention to in the near future.

After the discussion it was time for some questions. A question I found particularly interesting was: “Does the theme Cultivate the Land Within perhaps signify that we have no more land outside to cultivate? Doesn’t it mean that we have lost our culture or land and we are only left with land within to cultivate?

The Ubud Readers and Writers Festival was named “Among the top six best literary festivals in the world” by Harper Bazaar. In the coming days the Latitudes Tag Team, consisting of editor Emma Kwee and journalist Yvette Benningshof will explore this wonderful festival. In the meantime, if you’re in the neighborhood, get to Ubud to join in the fun! If you’re not, read our posts and weep…