Home Culture The Tale of Mwathirika and the Papermoon Puppet Theatre 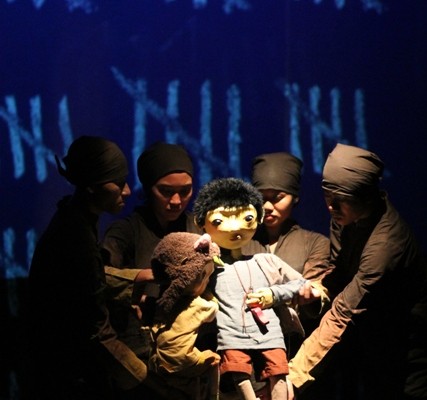 The Tale of Mwathirika and the Papermoon Puppet Theatre

The first time I saw Mwathirika two years ago at the French Cultural Center (CCF) in Yogyakarta, I was impressed. The tale of a family that lived in a period of political change was deeply moving. Mwathirika is a puppet performance by the Papermoon Puppet Theatre that does not shy away from difficult subjects. It deals with the anti-communist purge following a failed coup in Indonesia in 1965, when over 500.000 people were killed. This grim story was told like a fairy tale, imaginative and original, by blending the darker history of Indonesia with a rich artistic concept.

I wasn’t the only one that was impressed. Mwathirika was invited to go tour in America in October 2012! After returning to Indonesia, it was about time to sit down with Maria Tri Sulistyani, Artistic Director of Papermoon.

Can you tell me how could  “Mwathirika” ended up touring America? Why did Papermoon choose this piece?

For us, Mwathirika was the most ready piece to bring. Mwathirika is the most mature work looking at the concept, content, artistic feel and the output. Since the start of the process of creating Mwathirika, we agreed that this work should have a universal theme and we think it is important to share the work with the world: because “experiencing loss” and “political violence” can happen everywhere. 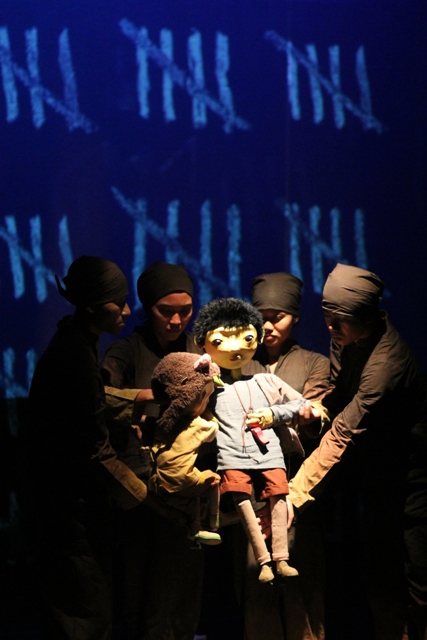 Tupu and Moyo, By: Iwan Effendi

How was America? How does it feel to meet peers and other puppeteers?

We had so many great experiences. We met a new culture, experienced a new work rhythm and different perspectives. We loved to see how appreciative the Americans were; they like to ask many questions and give us feedback. We noticed that people were not only enjoying our performance, but also wanted to know what Mwathirika is all about. We were so excited that we received positive feedback after sharing our story. Meeting the other puppeteers in America was also exciting. They appreciate others, want to share anything, yet remained very humble. It is very nice to meet people who do something similar to compare and learn.

When you chose to use the 1965 tragedy as the darker history in Indonesia as the theme of Mwathirika, Iwan Effendi added that the theme was chosen for very personal reasons. Can you tell me more that?

We chose the theme based on Iwan Effendy’s (Papermoon Co-Artistic Director) family experience. During the process, we found out that some people in Papermoon also had similar stories. If we look broader, a third of the Indonesian population felt the effect of the tragedy. Everybody experienced loss.

Political situations greatly affect the general population and the national memory. I also saw these experiences of loss in “Setjangkir Kopi dari Plaja”. Why does Papermoon choose this kind of topic in several performances?

We don’t want to rush, moving from one theme to another theme. We want to seek and explore several possibilities in a single theme. The 1965 tragedy can be seen from various perspectives. Why don’t we explore it further? This can make our pieces deeper.

About Papermoon and Pesta Boneka #3

What is the background of Papermoon? Can you tell us the story of Papermoon since beginning until now?

Papermoon began from a studio of fine art and performing art for children but there was a format change in 2008. I have always had a great interest in fine art, performing art and education. After I found out that a puppet theater is an appropriate medium, I also saw the great possibilities of communicating with the audience. I saw that using puppets, people both adults and children, tend to be more receptive, relaxed and open to receive something. I felt this is the method that I want to explore fully. There are so many things that can be told with a puppet. Interestingly, a lot of people still believe a puppet can tell a story.

Why does Papermoon choose Japanese puppets (bunraku and kuruma ningyo) instead of Indonesian wayang (shadow puppet)?

We choose the puppets based on the concept of the story and the performance. We never limit ourselves. In Mwathirika and Setjangkir Kopi dari Plaja, we were adapting bunraku and kuruma ningyo from Japan because we see that there is an intimate feeling when playing with these puppets. The puppeteers can touch the puppet directly without using sticks like in wayang, or using strings, like with a marionette. This kind of intimacy is what we need to tell intimate and personal stories. We also did performances with wayang and even a 4-meters-sized giant puppet in an open space. The point is, we explore all options and choose based on concept and performance. 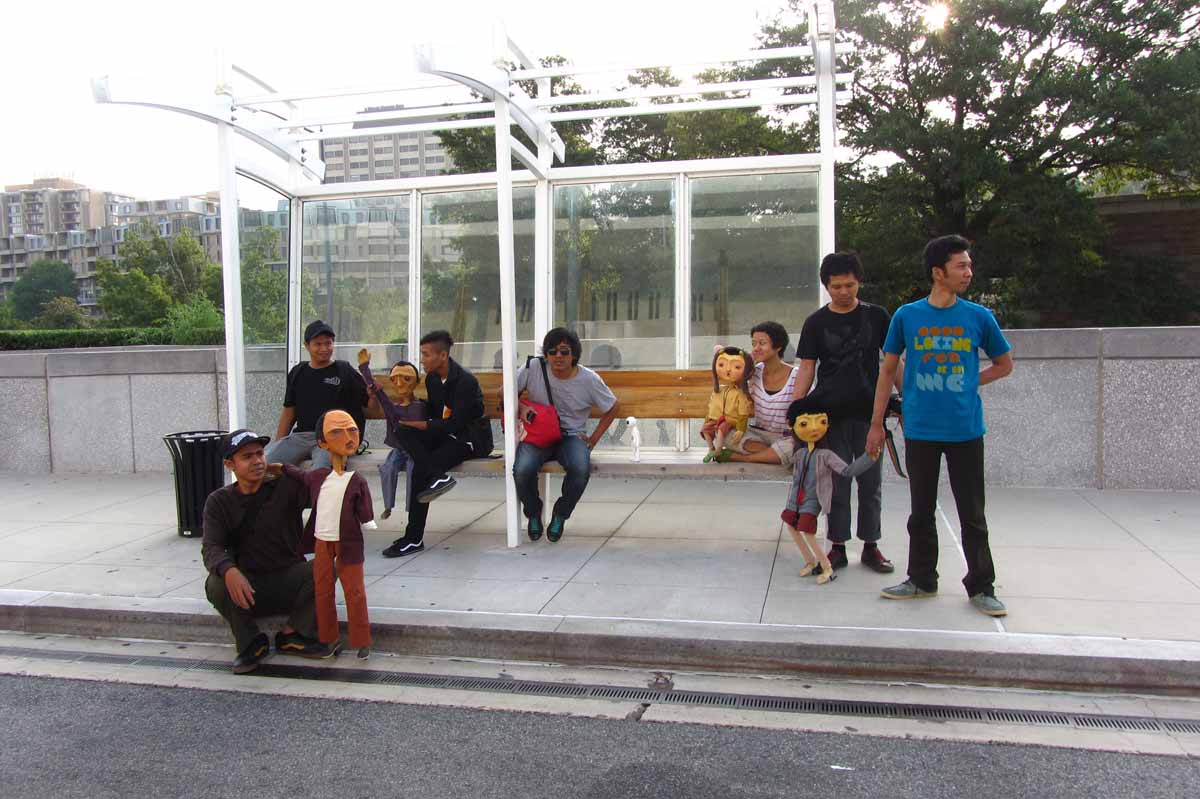 Papermoon in America, By: Iwan Effendi

What inspired you to create the Papermoon Puppet Theatre?

Every project with Papermoon is inspired by something else. I am very inspired by everyone who believes that a dream can be realized through hard work and effort. That is why I started Papermoon.

Can you tell me what the steps are from the beginning to the stage when creating a performance?

There are a lot of steps actually. We get the theme first then do the research or vice versa. We always save all of our ideas. Every time we see or find interesting things, we keep it in mind. When we decide to create a new performance, those ideas will be discussed and adapted for the stage. Sometimes I and Iwan Effendi discuss the theme first. After we decide what theme will be performed, we research both the theme and the artistic concept. The research can be done from movies, interviews or other methods. After that, I write the script draft. This draft will be discussed and revised many times through discussion between me and Iwan. After we find the right format, we share it with the other Papermoon members. The script we share is not complete yet; it is changeable. Sometimes we change the script and add more detail in the middle of the process. We explore different avenues based on the puppets that we made. From here we can adjust any detail in any scene. A puppet is not an actor; that is why the actor and director must understand the puppet’s ability and limitations without being too imposing.

See a practice round here:

I’d love to. But it seems to take a lot of time because “Setjangkir Kopi dari Plaja” is a site-specific performance which builds upon the atmosphere of the space. It is more complicated because the concept will depend on the space. We still have to process the artistic concept more so it gets easier to bring this piece go to other countries. 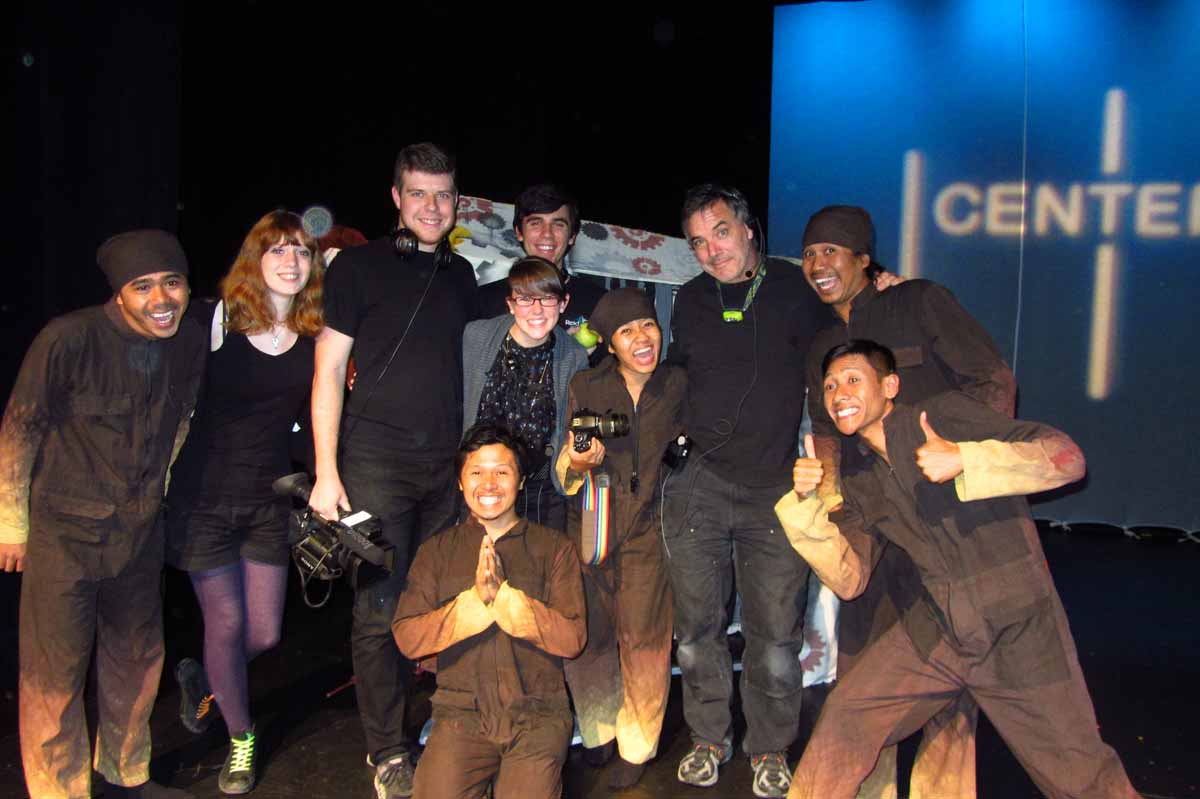 After the Show, By: Iwan Effendi

What will Papermoon do next?

We will perform Mwathirika in Singapore on November 8th-9th, 2012 at the Asean Puppetry Festival. After that, I and Iwan Effendy will do an Artist Residency program for a month in the Philippines. We have many plans: visit the giant puppet parade in the Philippines and learning how the Filipino pupppeteers work. After returning from the Philipines, Papermoon will hold PESTA BONEKA #3, a Biennial puppet festival that will be held at Padepokan Seni Bagong Kussudiardja, Yogyakarta, December 17th-19th 2012.

What kind of event this will be? Who are the artists that will join this event?

This festival basically celebrates the puppet theater art world. This festival will be held for three days in a row; not only presenting several shows, but also various workshops for the public. In addition, we will also invite the puppeteers to cook together. It will be fun. Actually, we just want to create a festival where the artists and the public can share things.