The Rinjani [Rubbish] Trail: How Lombok’s Majestic Rinjani is Covered in Mountains of Litter!

The naturalist John Muir is credited with a quote most mountain climbers have memorised and tend to recite after a few beers or moments of beauty and sheer awe. Climb to the top of Rinjani in Lombok and you might hear a few of the brave souls who left camp at 2am to make the sunrise summit mumble it to themselves during the euphoria that comes with the 3,726-metre accomplishment.

If Rinjani herself could speak, she would beg for help. If only the men in charge of caring for her would listen.

From afar, the crater of Rinjani looks beautiful and unspoiled, By: Angela Richardson

With tens of thousands of locals and foreigners alike flocking to Lombok every year bent on conquering the brutal three-day trek up the 3,726-metre summit, officials, trek organisers and skeleton clean-up crews can’t seem to keep up with the purple packs of empty Kukubima forgotten along the trails and the streamers of used toilet paper strewn like tinsel through the high grass mere metres off the beaten path.

One of Indonesia’s most popular tourist attractions is quickly becoming the country’s tallest cesspool.

A signpost asking climbers to bring their rubbish away with them, By: Michael Bullinger

“Right now we have clean-up teams going out twice a month to take care of the rubbish, but with all the tourists and locals coming through there is no way to pick everything up,” says Pak Pahe, a stocky, soft-spoken guide who has been leading expeditions up and down Indonesia’s second-highest volcanic mountain for the last 15 years. “Sure, I get tired of all the tourists complaining about the trash and toilet paper, but what can I do?”

According to Rinjani Trek Management Board officials, regular clean up patrols make the rounds once a month, ten times a year. And twice a month during July and August, the peak season, two teams (one entering from the Senaru gate on the east end of the park and another one from Sembalun gate on the west end), consisting of eleven porters and two rangers make an effort to collect all the rubbish and human waste along the pathways. This process costs an estimated Rp 5,500,000 each time the team goes out.

So it all comes down to math. Can officials afford to send out more clean-up crews?

It’s not Pak Pahe’s job to do the math. It’s not his job to pick up the trash. It’s his job to lead the expeditions. It’s not that he’s passing the buck. He just doesn’t have time to organise crews and kick things into gear. The 29-year-old has a family. They come first. He climbs Rinjani to put food on the table and clothes on his son’s back. He could care less about a picturesque sunrise or a breathtaking view of Gunung Baru, the fast-growing volcano situated in the middle of Danau Segar Anak.

Rubbish at the Danau Segara Anak campsite, By: Michael Bullinger

But what happens when the tourists stop coming? What happens when the trash becomes too much and people stop saying, “Oh, Mt. Rinjani is amazing, you have to see the sunrise from the summit,” and start saying things like, “Well, Rinjani was amazing, but there’s so much trash and toilet paper everywhere it’s just not worth it. Go see Kinabulu in Malaysia, there’s no trash and they have working toilets.”

Tourism is a word-of-mouth business. It’s as simple as that. And when people stop talking about the views and start talking about the miasma that comes with dropping your pack at the Segara Anak camp sight, things for Pak Pahe and other guides begin to look grim. 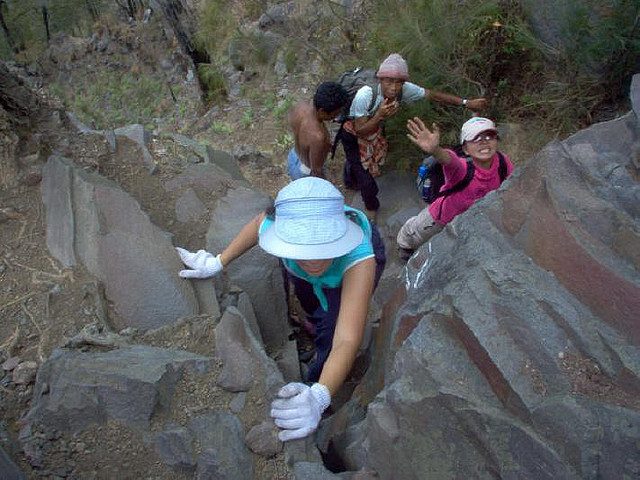 An uphill battle, By: Bohari Adventures

“It is very interesting to compare Indonesian mountain experiences with those had in nearby countries,” says Dan Quinn, the editor of Indonesia’s own Gunung Bagging. “Have you climbed Kinabalu, in Malaysia? At every post you can get drinking water and there are toilets that are cleaned regularly and litter bins that are emptied several times a day. It’s strange that the relevant authorities in Indonesia seem unable to provide similar facilities and do something to clean up places like Rinjani. It wouldn’t require a lot of extra staff to keep the mountain clean. It’s not difficult, is it? The National Park fees aren’t insubstantial so you’d hope they would be spending some of that money to keep the place clean. If they are, they obviously aren’t spending anywhere near enough. It is interesting to note that most Western tourists are much more conscious of the harm that littering does, but ironically they are charged much higher entrance fees! This seems incredibly unfair.”

We all know people, not politicians are the agents of change. Individuals step up and implement change. They teach their children to throw trash where it belongs. They work hard to leave the park cleaner than they found it. They are the change.

But that takes time. And time is simply something Rinjani doesn’t have. 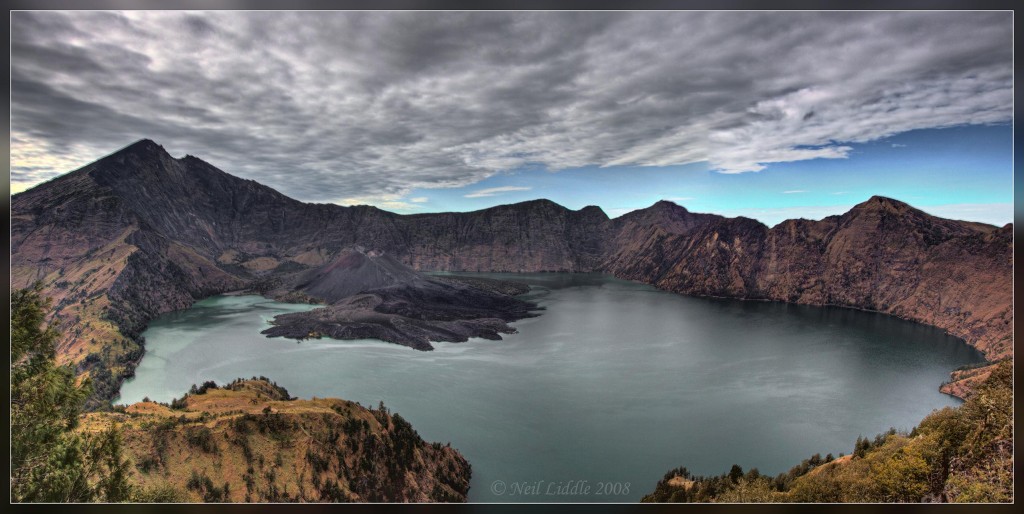 Time is simply something Rinjani doesn’t have, By: Neil Liddle

“The heads of the park hate me,” says John Maray, who employees some 15 guides and 200 porters and has owned and operated John’s Adventures since 1982. “At the last meeting with the Rinjani Trek Management Board I took all the complaint forms from the tourists and just threw them at the board members and walked out.”

Bureaucrats in Mataram, Lombok, who have no problem collecting their chunk of the Rp.150,000 entrance fee charged to tourists and Rp 25,000 charged to locals, are doing little to ensure that porters and guides, who rely on the mountain to feed their families, will have jobs when the tourists stop coming.

The breakdown, according to the RTMB, goes like this: the central government, through national park services, receives 13.3 percent of the Rinjani national park entrance fees, the local government (regency level/district) sees 20 percent, the RTC (village chiefs) and local government (village level) receive 10.7 percent and the rest of the money, 44 percent, goes to RTMB to finance conservation, tourism and community development programs, which maintain the trail facilities, repair or build some facilities like shelters and signage. 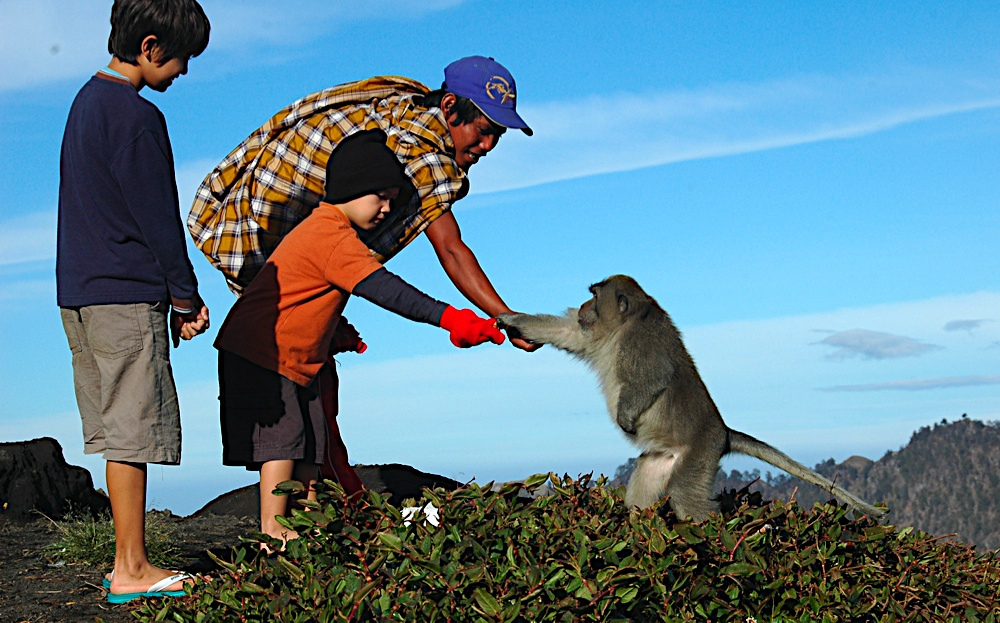 We are not the only ones enjoying Rinjani, By: Boharo Adventures

Two bridges and one toilet have been built this year.

It is trek organisers like John who have to endure the hours of finger-wagging and lectures from tourists on how to keep the park clean.

And they have every right to, after all 20 percent of the Rinjani National Park entrance fee goes straight to fat cats, most of whom have never even seen the mountain let alone climbed it.

But then there are guys like Asmuni Irpan, who has been the Executive Director of the Rinjani Trek Management Board for the last five years. Asmuni has climbed the mountain—several times in fact. And he’s been to Kinabalu. He knows what it takes to keep Rinjani clean. He’s got a plan. He just needs to push. Because everybody knows, if you don’t push, you’ll never move.

He wants to educate trekkers, require that those climbing the mountain rent toilet tents and fine those individuals who do not bring their rubbish down with them when they leave the mountain.

“I’ve heard some crazy stories… about how people were encouraged by guides to leave their rubbish up on the mountain instead of bringing it back with them,” says Quinn. “It’s a broader social problem in Indonesia – people clearly aren’t educated to see littering as being wrong. Maybe part of this is because if you do throw rubbish onto the streets in the cities, it doesn’t create a long-term problem because poverty-stricken people will come along and sort it out and sell what they can of it for tiny sums of money. Sadly, on the really popular mountain trails in Indonesia you actually start to worry if you don’t see any litter for a while because it might mean you’ve taken a wrong turn!”

A stark contrast, By: G. Bohne

So what can individuals do to make sure that Rinjani doesn’t go the way of other popular volcanic peaks like East Java’s wildly popular Mt. Bromo and Gunung Gede?

“I think it’s a lack of communication by the government and awareness by local people,” says Susan Tjaja, a Cirebon native and an avid climber who made it to the summit last September. “Most of the visitors are foreigners and they have porters carrying their bags and food and taking care of their trash. But locals that take to the mountain don’t have porters and they haven’t been well educated about the environment and keeping it clean so they just leave their trash there on the mountain.”

Back to the math, education plus clean-up crews equal a beautiful mountain. But then again, why even do the math when you can simply sit back and collect the cash?

If 1,900 tourists visited the park last month, and we estimate that half of them were tourists, that’s $14,250. If you figure that each time a clean-up crew goes up into the heart of Rinjani it costs $644 dollars, the park service could essentially clean up the mountain 22 times a month with some cash left to spare.

It all comes down to math.