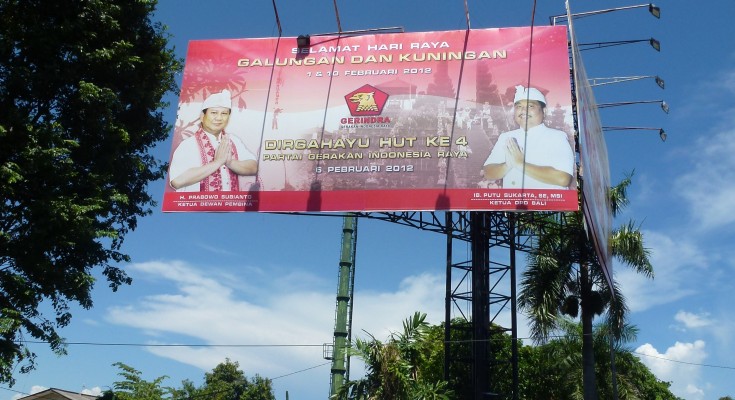 Indonesia entered a new phase in its existence as a nation in 1998, when President Suharto stepped down as the result of massive protests against his thirty-two reign. One of the many grievances was the governments’ centralistic nature. Taking this grievance seriously, in 2002 a law was accepted transferring part of the central government’s power to the level of the district in 2002. This and the concomitant introduction of direct elections for the offices of governors of provinces, heads of districts and members of the legislative councils led to a revival of regional politics. That arena had been dull in the past, because during the Suharto period the bureaucrats were appointed by the central government and the members of the legislative council by the top of three parties in Jakarta. 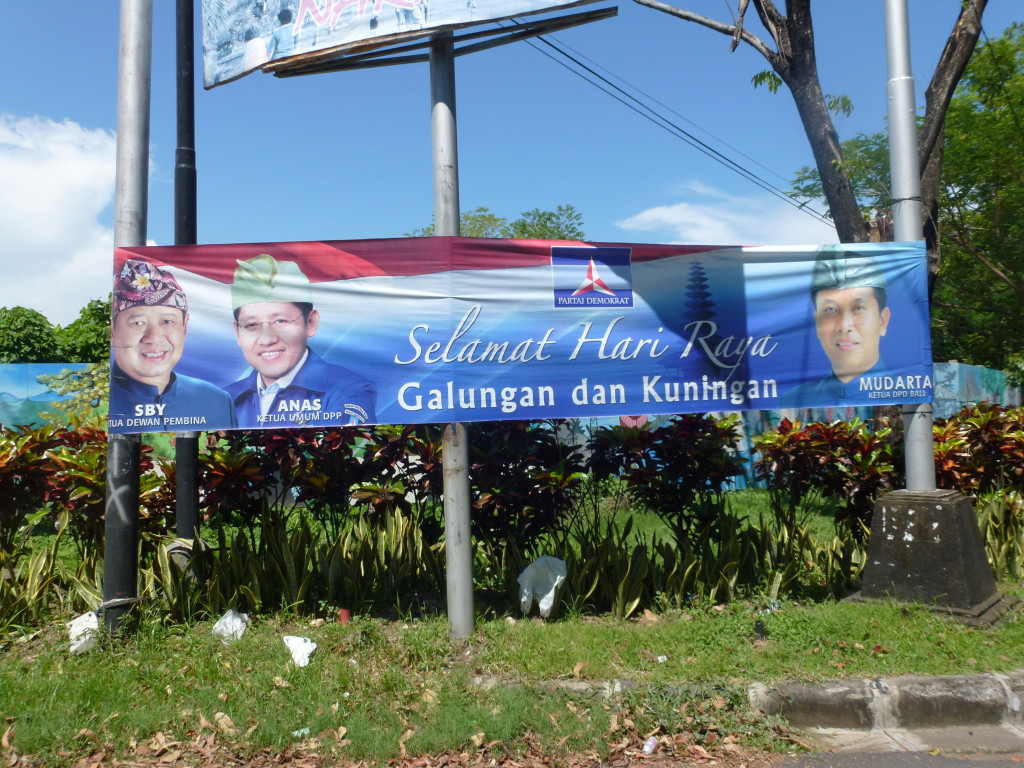 The political constellation has thus changed significantly and this is occasionally reflected in telling ways. For example, in the billboards appearing alongside the arteries of the city of Denpasar, the capital of the island of Bali, on the eve of the most important Hindu-Balinese religious ceremonies, Galungan and Kuningan. On many of these billboards expressing good wishes to the Hindu population during the celebration of these holy days, the head of a party at the national level on left side and on the right the head of the party on the regional level are depicted. 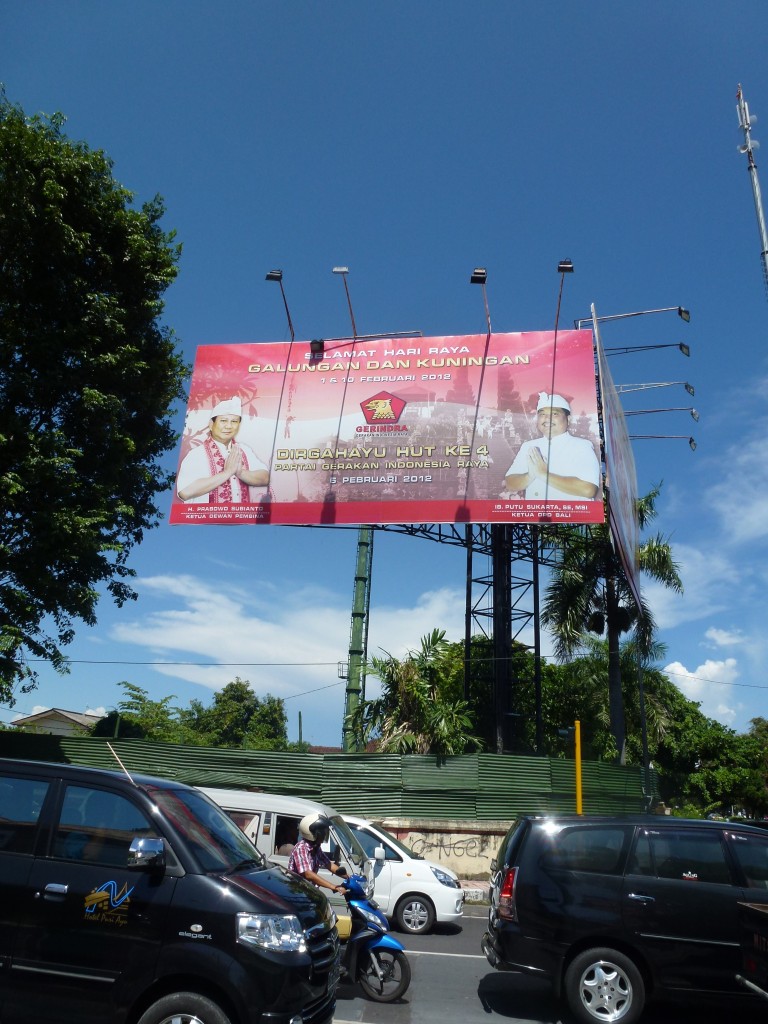 The massive billboard of Gerindra, By: Sita van Bemmelen

The largest billboard I encountered was placed at the junction in the center of the city, where the two largest department stores can be found. Contrary to what one would expect, this billboard was not erected by the largest party in the country, the Democratic Party of the current President, Susilo Bambang Yudhoyono (SBY). Nor by his party’s major rival, the Golkar Party, in the past Suharto’s political vehicle, that subsequently lost out but still came in second during the latest elections in July 2009.

Both parties indeed put up billboards too, but less conspicuous ones that the one of Gerinda, standing for the Great Indonesia Movement Party. Gerindra was established and chaired by the notorious former military leader of the Special Forces (Kopassus) between 1995 and 1998, Prabowo Subianto. Gerinda only won 4,46% of the votes in 2009, but Prabowo apparently has not lost faith that his party can do much better in the upcoming elections which will take place in July 2013. It is said. that he is still very rich, which could explain the large expense Gerindra made for this and other billboards.

Prabowo probably bets on the tendency of the Balinese to vote for a religiously neutral party that promises to honor Balinese cultural and religious identity that deviates from the Muslim majority in the country. By the way, the Democratic Party and Golkar as well as the third largest party, the Indonesian Democratic Party (PDI-P) chaired by the former President Megawati Soekarno Poetri, adopt this same strategy. These three parties, however, all face problems that may affect their capacity to gain votes in the upcoming elections. 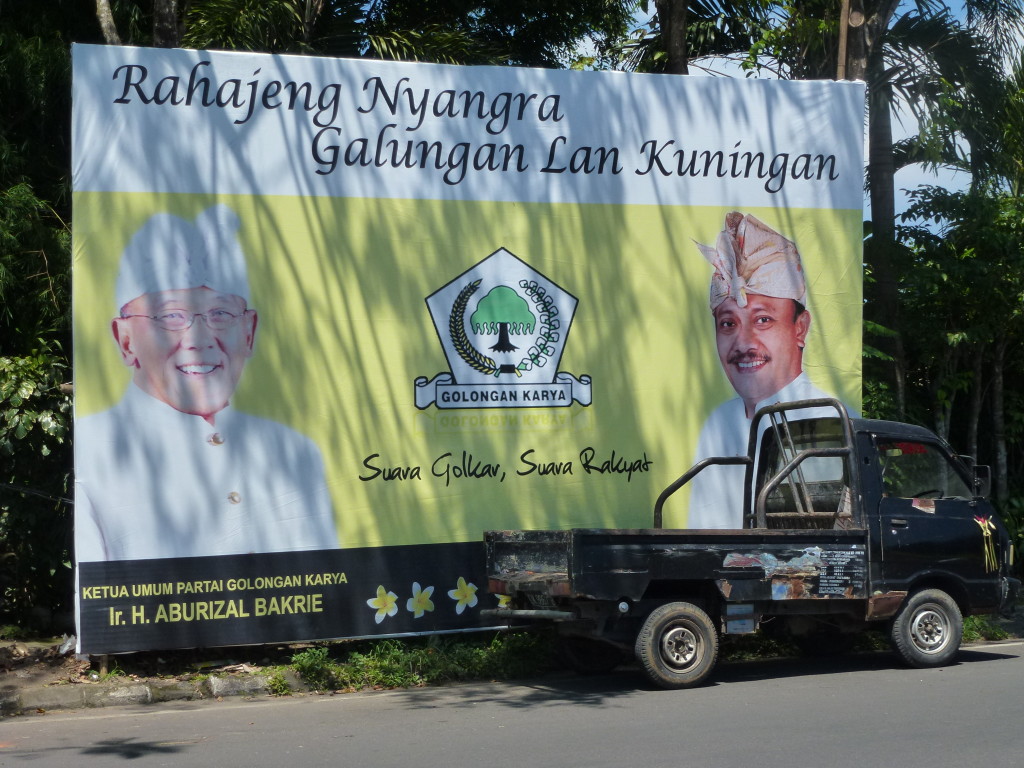 SBY’s party struggles with allegations of corruption involving the highest level of party’s leadership. Moreover, although his party is secular in appearance, SBY himself has not scored well as a staunch protector of religious and ethnic minority rights. Golkar’s chairperson, Aburizal Bakrie, is still associated with ‘Lapindo’, the largest environmental scandal in the country in the form a large area flooded by volcanic mud in the province of East Java. And Megawati’s PDI-P seems to be still in the process whom to put forward as the party’s figurehead. Perhaps that is why the billboard erected in the name of this party does not portray a national and regional party leader. 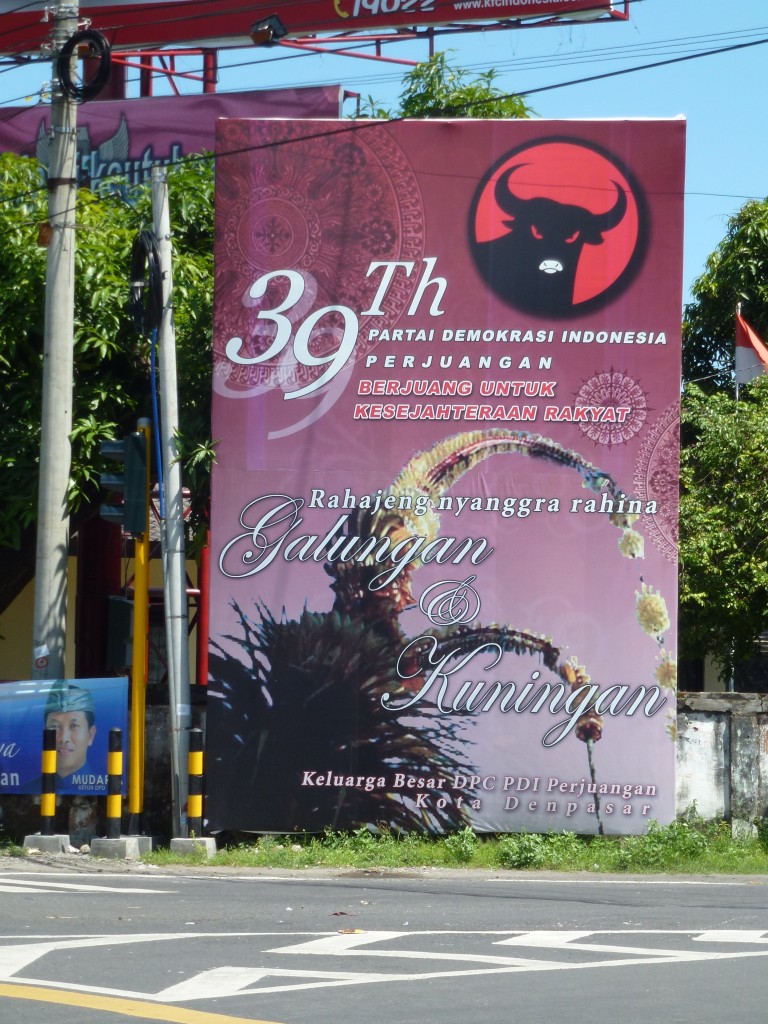 The billboard of Megawati's PDI-P, without party leaders, By: Sita van Bemmelen

Remarkable, to say the least, is that on all billboards the national party leaders have made a concession to Balinese culture. Although none of them are Hindu-Balinese, they wear the traditional Balinese headdress for men, the udeng, worn mainly at the time of religious ceremonies. This as well as the good wishes for the Galungan and Kuningan ceremonies are therefore nothing but tokens of lip service to the nation’s slogan ‘Unity in Diversity’, hoped to sooth the fear of the Balinese of Muslim dominance. Evidently, none of the parties with an overt Muslim identity has taken the trouble to make these concessions. They have not advertised their party through billboards, wishing the Balinese well during the ‘holy day’ period. Not surprisingly, because Bali is not a province where they expect to gain a large following anyway.

An already mentioned feature of the billboard – the combined portrayal of national and regional party leaders – tells a story too. Since the public can choose its regional leaders through direct elections, local branches of political parties have occasionally  favored another candidate than the national party leadership, because the favored candidate on the local level was considered a better vote getter or had made a larger contribution to the party treasury. Such internal conflicts are of course not good for a party’s image. The billboards probably try to overcome this by presenting an image of harmony between the national and regional party leadership. 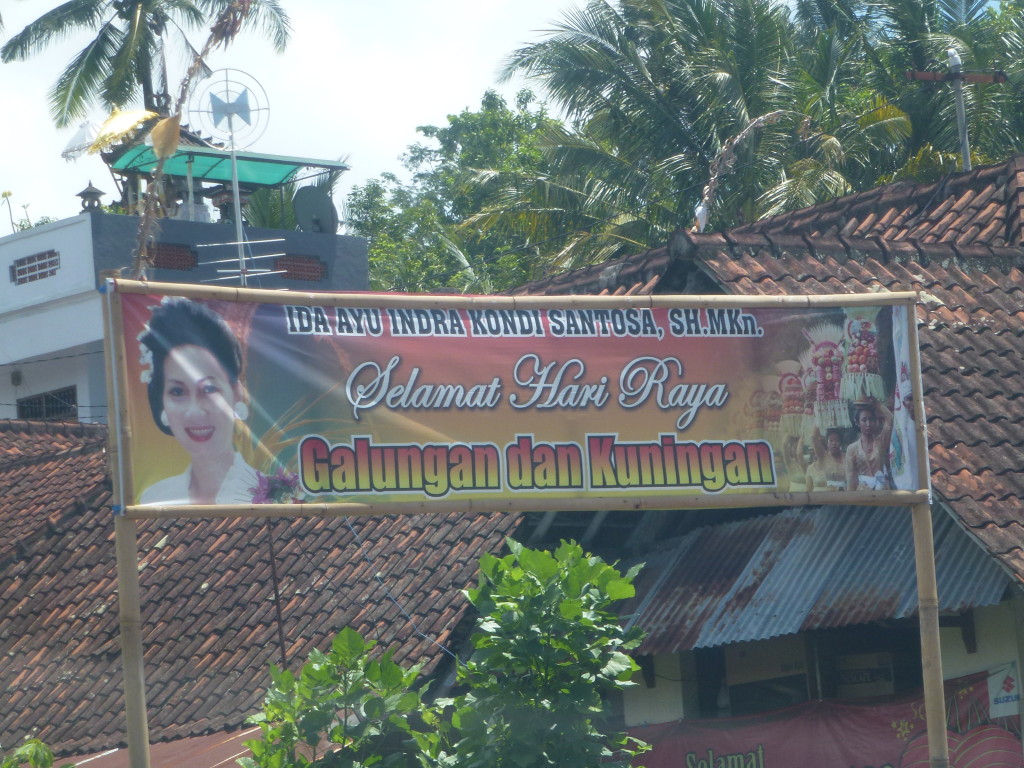 The billboard of Kondi without party affiliation, By: Sita van Bemmelen

One billboard encountered in the district of Klungkung contravenes the general pattern. A candidate for the national legislative council in 2009, Ida Ayu Kondi, supported by Megawati’s PDI-P, this time has taken the courage to present herself of her own accord. Rumor has it, that she aspires to take part in the election for Klungkung’s district head. Whether she stands a chance, is doubtful, because the billboards with her picture on it do not refer to any party affiliation.