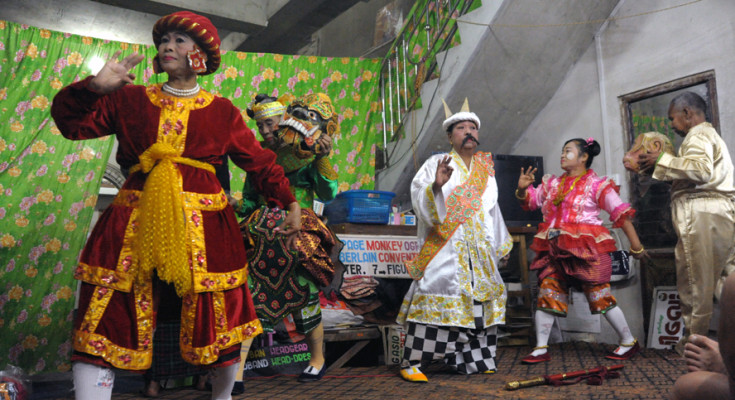 The Moustache Brothers: Burma’s Comedy Trio Keeps on Cracking Jokes against the Grain

Humor and totalitarian regimes don’t go well together, something the Moustache Brothers from Burma can attest to. The Moustache brothers are a comedy trio from Mandalay, known for their live performances that combine comedy, classic Burmese dance, and sharp satirical criticism of the military regime. In 1996 they paid a high price for cracking jokes against the regime. 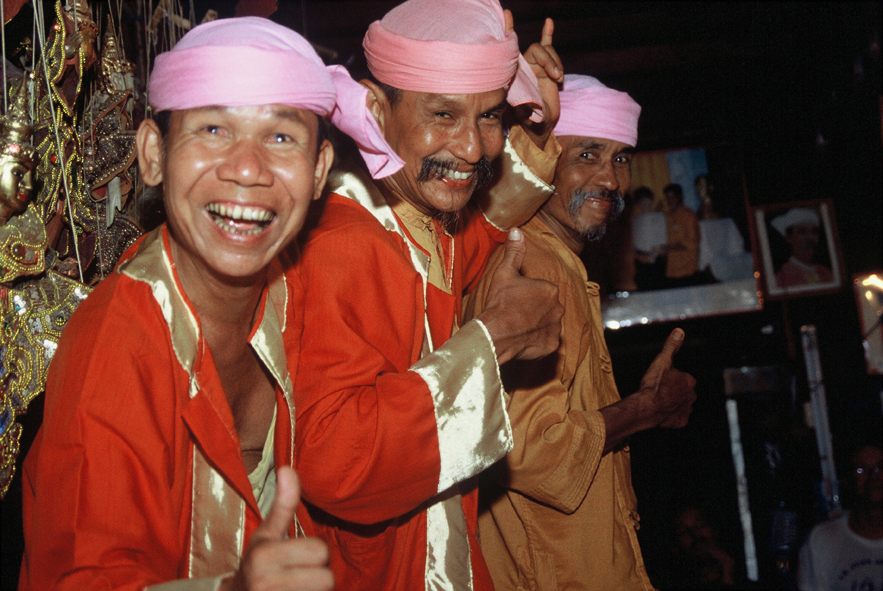 The Moustache Brothers, One for all...By: Diana van Oort

The Moustache Brothers: “All I did was cracking some jokes”

“All I did was cracking some jokes. But for that, I was sentenced to hard labor,” says Par Par Lay in an interview with Newshour on the BBC World Service. “I didn’t revolt against the government but I was charged with a political crime.” In 1996 Par Par Lay, 64, and his cousin, 60-year-old Lu Zaw, were sent to prison after they performed outside the house of Burma’s most famous political prisoner, Aung San Suu Kyi, where they made the military government the butt of some jokes. Lu Maw, 62-year, avoided prison, apparently after they drew lots to decide who would actually deliver the controversial jokes. They came out of prison in 2003. In 2010 Aung San Suu Kyi herself was released from house arrest by Burma’s new, nominally civilian government.

The Moustache Brothers have no plans to stop lampooning the authorities. Par Par Lay says that although in general there is more freedom, people still live in fear in the countryside. He travels to remote districts and tells people not to be afraid: “We will keep on campaigning until Aung San Suu Kyi becomes president. We believe she must win.” On September 25, 2007 Par Par Lay was arrested again as part of the crackdown on the anti-government protests. He was released on November 1, 2007.

Visiting a show of the Moustache brothers was considered sort of a ‘must’ ten years ago when I first saw them. Not just to support them, but also to show you were against the military dictatorship. Even now the lonely Planet considers them a ‘must’ when you visit Mandalay. I tend to agree, but only if you have at least read something about the political situation, Burmese culture and what the brothers have gone through. Otherwise it might come across as a somewhat tacky show in the garage of a middle-aged family. 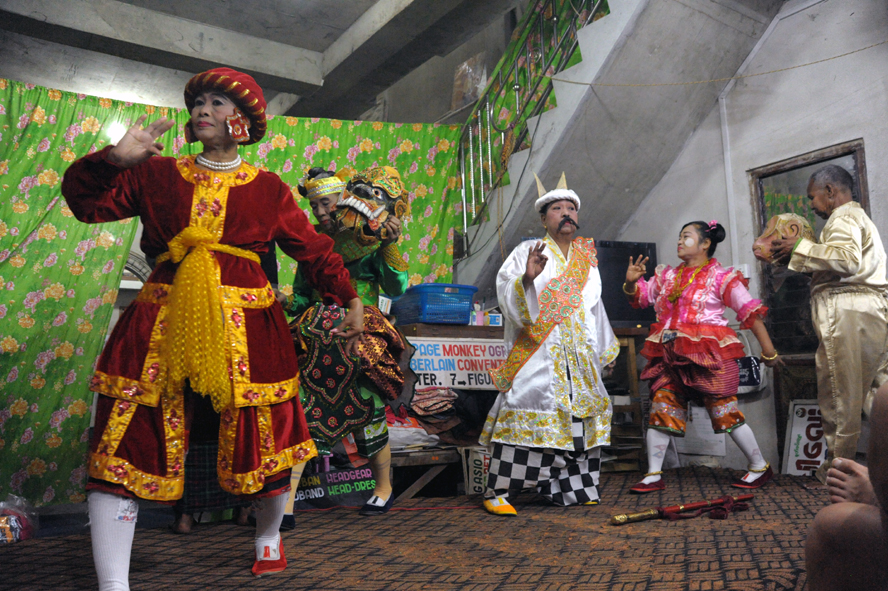 The Moustache brothers perform in their makeshift theater, By: Diana van Oort

The Moustache Brothers: One for All and All for One

I was honored to see the Moustache brothers again this year, still going strong and still in good health, despite all the hardship they went through. They moved to a bigger house and are still receiving foreign guests in their makeshift theatre. The atmosphere is more open than ten years ago. Their cousin told me that even though they are still blacklisted, which means they still aren’t allowed to perform outside their family home, the Burmese now come to visit and talk to the family. 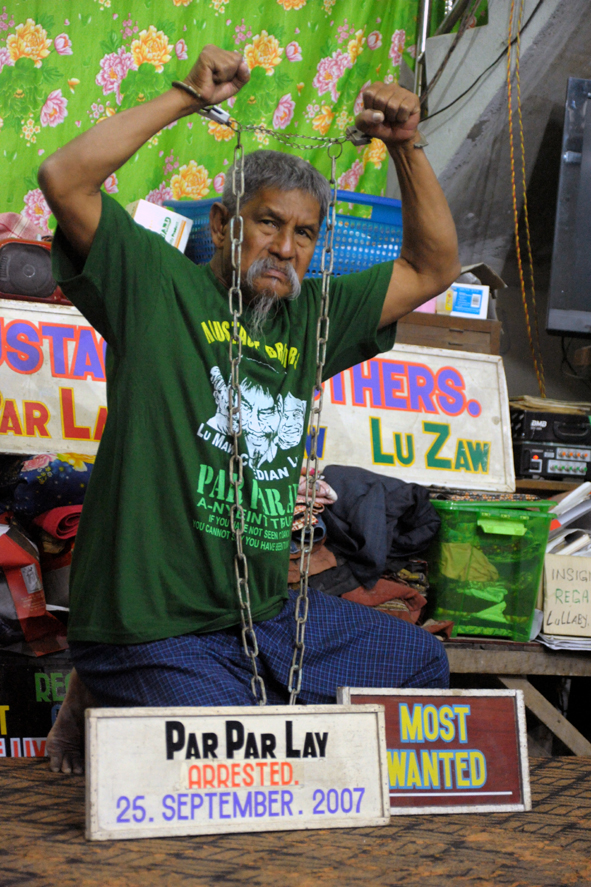 Par Par Lay shows how he was incarcerated, By: Diana van Oort

The introduction to the show is a summary of the struggle for freedom of the Burmese and the problems the family had with the authorities. A clip from Hugh Grant’s film “About a Boy” in which he makes a plight for Par Par Lay’s release is shown. A Chinese copy as Lu Maw points out. “Burma is very lucky to have China as a neighbor. We can have Adidas, Nike for only three dollars. All fake.” There is uneasiness in the relationship between Burma and their neighbor China who ‘moved in’ when Western Countries couldn’t do business because of the sanctions.

Par Par Lay shows us how he was handcuffed and shackled during his incarceration. “The situation in jail there was really terrible. I had to break rocks. There was never enough food to eat and if the guards didn’t like a prisoner, they would shoot them dead. I saw that happen with my own eyes. I’m still feeling bitter about it.” Lu Maw, the only brother who speaks English, reminds us that although many political prisoners have been released, about 300 people are still in jail. “We still have to fight to get them out, he says.”

During the show the struggle of the Karen is also mentioned. After the show I asked him why and he replied he respects the Karen (and Kachin) because they are still fighting. Part of the show is similar to the one I saw ten years ago. Lu Maw still presents his wife, who once graced the cover of the Lonely Planet guidebook, and who shows us a classical Burmese dance. So does his sister who dances the male part.

The show provides them with a steady income of 10$ a head. “Easy money! You are sitting ducks!” jokes Lu Maw. Part of the money they receive goes to support families of political prisoners. Knowing the Burmese, it actually will.

The Moustache Brothers: The Voice of the People

The Moustache Brothers say their comedy is still relevant in a Burma that is making the transition to civilian rule. Lu Maw compares the military government’s move toward civilian rule to a snake shedding its skin – in the end it’s still a snake. Many basic issues people face still have not been addressed. “Education is not free. Lights go off and on. In hospitals there is no medicine. Many die of HIV; the government says nothing. Everyone is corrupt – on the take!” 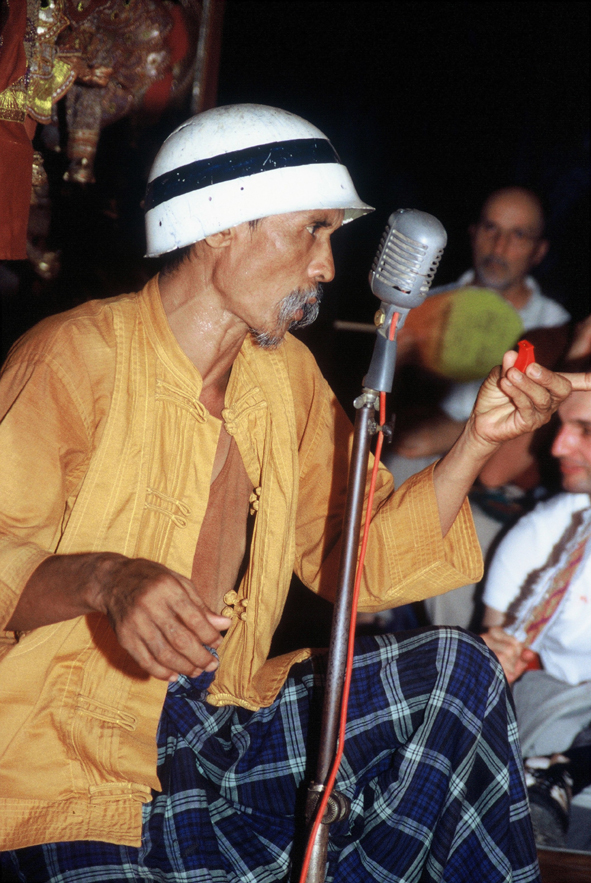 Making fun of the police, By: Diana van Oort

The brothers are well known in Burma as dissidents and local media speak to them regularly for their views on the reforms. They are the voice of the people and they haven’t given up politics. In the meantime, the Moustache Brothers refuse to retire. “Comedy runs in our family. My grandfather and my father were both comedians,” says Par Par Lay. “I like to crack jokes and want to see people smile and be happy. I’m 64 years old now, but I always feel young when I’m cracking jokes.”

The spirit of the Burmese is striking: we will continue, if things don’t change we will go and demonstrate again. At the same time they remain realistic and know changes won’t come overnight, but gradually. The joy and pride is apparent and no cynicism about cosmetic changes, corruption, greed and the growing gap between the haves and the have-nots can alter that. The Burmese know what they want. They want good education so their children learn to have an open mind. They want real democracy and the freedom to choose their own leaders. They will fight to make sure the path they are embarking on will be one of no return.

Watch the video below, taken from Al Jazeera, to see the Moustache Brothers in action!

For more info, check the Facebook page of the Moustache Brothers.