collection of betamax and VHS

Indonesians are more familiar with the term “Sinematek Indonesia” when referring to their cinematheque, not that it is that well-known outside certain circlessuch as film researchers and students, film festivals, and television stations. Despite its significance — it holds about 2,000 film titles and stores over 3,000 film reels and videos — one will soon feel its somber atmosphere upon visiting the facility.

In the words of its founder, while the Indonesian film industry was blossoming throughout the 1970s and 1980s, the cinematheque was dying because of its meager budget. It does not look so much different today.

Located in Pusat Perfilman Haji Usmar Ismail (PPHUI), or the Haji Usmar Ismail Film Center, the cinematheque was established on Oct. 20, 1975. Its conception began when Misbach Yusa Biran, a journalist turned screenwriter and director, saw the need for an organization focused on the archiving and documentation of Indonesian films. His endeavor started at the end of 1970 out of a small office in Central Jakarta’s Taman Ismail Marzuki arts complex.

In 1973, Misbach received a scholarship from the Dutch government to study the film archiving system adopted by a cinematheque in Amsterdam. Two years later, Ali Sadikin, then the governor of Jakarta, simultaneously opened PPHUI and Sinematek Indonesia. Misbach headed this first film archive in Asia, was initially funded by the government of the Special Municipality of Jakarta, until December 2001. 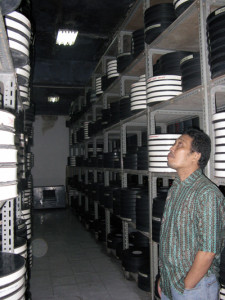 Three years had passed when the cinematheque was put under the Indonesian Ministry of Information, following the debate that film-related issues should be handled at the national level. In 1995, the Indonesian Cinematheque was placed under the management of PPHUI Foundation, while still receiving support from the ministry through the National Film Development Agency (BP2N). Four years later, under the presidency of Abdurrahman Wahid, the Ministry of Information was dissolved, and Sinematek Indonesia has relied largely on PPHUI for its operations ever since.

Today the organization today has less than 15 staff in its three divisions: data management, film maintenance, and library and documentation. So far the cinematheque has been capable of only modest maintenance of its collection.

Using spools and a special solution, the reels in the entire 35-mm collection 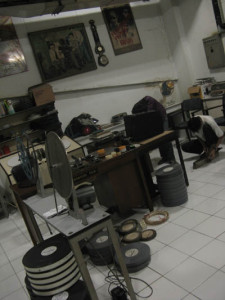 are cleaned manually in rotation, about 20to 30 titles per month. Reels that are ruined by acid are excised, but those that can still be saved are taken to a special room, unreeled, and fanned so the acid will dry and blow off. Next to the cleaning room in PPHUI’s basement is the storage facility. Kept at a temperature of 9 degrees Celsius and a relative humidity of 45 percent, it contains rows of metal shelves holding thousands of plastic and tin canisters containing film reels that date as far back as the early 1930s. There are also trunks containing 16-mm films and a collection of Betamax and VHS videos.

The cinematheque has been gradually converting its film collection into digital format, although a lack of funding is holding this effort back. The organization is also trying to provide documents about Indonesian films to the public on the internet. It seems, however, that its website  www.sinematekindonesia.com/  still needs a lot of work.