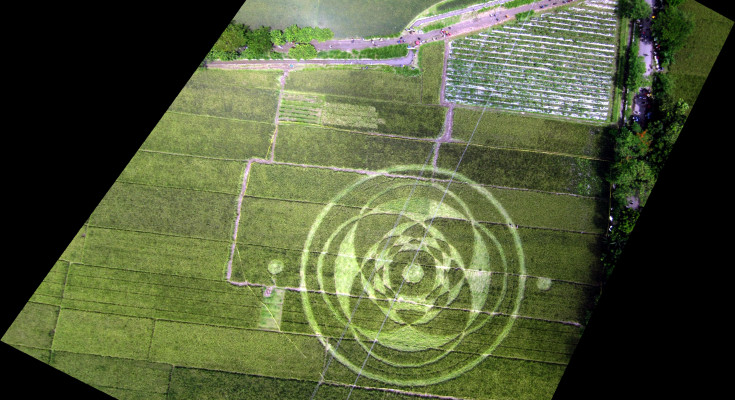 The Hoohah Over Crop Circles In Indonesia

In the past couple of weeks, the big hoohah has been the phenomenon of crop circles. The first one was found around Sleman on 23rd January 2011. While people were still in awe of this first ever crop circle in Indonesia, another one was discovered in Bantul. The third in the list was soon identified in Magelang.

Almost at the speed of light, the news on crop circles was transmitted into Indonesian households. Inevitably, this has drawn the attention of all sorts of relevant ‘authorities.’ LAPAN, the national space institute, quickly came out with a statement saying that these crop circles were man-made.  BATAN, the nuclear regulation agency, followed suit coming to the same conclusion. This was primarily due to the absence of radioactive traces—commonly found in the so called ‘real crop circles.’ Police, on the other end, are busy trying to find the culprits who have created such uproar.

People’s interest has been enormous, beyond belief almost. Despite the thousands of pictures easily accessible on the internet or other media, many still insist on coming to the site and join the crowd of crop circle watchers. One even climbed a high mountain during heavy rainfall, just to watch the crop circle from above. The result? He fell down and died.

The Attraction of Mysteries

The big question is: what leads these geometric patterns to attract such extreme interest among people? Is it the association with UFO’s or aliens?

This phenomenon is reminiscent of a previous ‘supernatural’ sighting of a ghost dubbed ‘kolor ijo’ ghost (literally meaning ‘green boxer shorts’). The two cases, in some strange way, created both fear and great interest at the same time. This is characteristic of unexplainable phenomena. Rudolf Olfo in his classic book The Idea of Holy used the phrase mysterium terribile et fascinans. Its closest English translation is: the fearful and fascinating mystery. This is apparent when humans experience fascination and fear over natural phenomena such as lightning, storms or a rough sea.  When seeing these natural forces in action, people of all times and places—instinctively—cannot help but to pay respect and worship the natural forces, spirits and gods as the ultimate power ruling the universe.

Owing to the development in science, the fear and fascination over natural phenomena has by and large faded away. Modern society tends to give less and less room for mysterious phenomena. However, the instinct of needing some level of mystery remains. This is where the ‘crop circle’ phenomenon exactly fills the need.

There goes the Hoohah

Scientists in Europe and North America almost unanimously have agreed that obsessions around crop circles and UFO are merely superstition.

In the world of science and philosophy, there is one famous adagium called Occam Razor. This is a school of thought that suggests the following: in the event of multiple explanations, choose the simplest one. Latest findings in Yogyakarta indicate strong reasons to believe that the circles are man-made. This explanation, nevertheless, does not automatically diminish the many other, more spectacular speculations about the phenomenon. Why? Because the simplest explanation is not fascinating. It is not fun. The simple explanation does not allow any room for mystery. After all, we are all humans. It is human nature to need mystery. There goes the hoohah… in Indonesia spiritual and animistic beliefs are still widespread. This coupled with a well oiled gossip craving mass media apparatus, propels unlikely stories to huge proportions. This is also what makes Indonesia a fun place to live and a county where life is never dull.