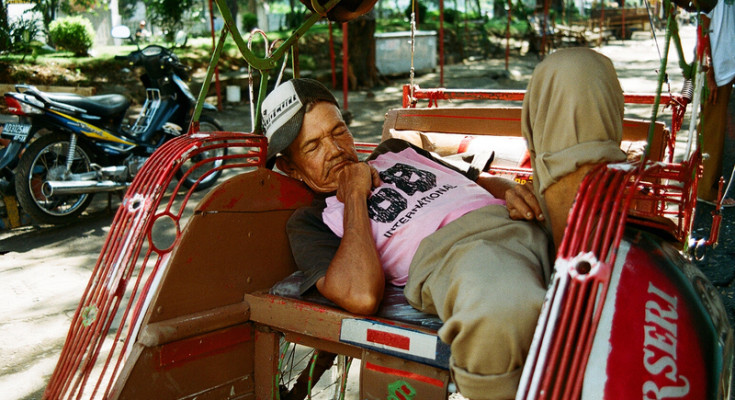 The Becak Way: a Book by a Jogya Becak Driver 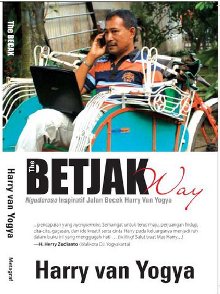 In the heart of Java, in the city of Jogyakarta, Harry van Jogya or Harry in short, is waiting for you. He is a becak driver. He will take you anywhere you want to go. Let Harry drive you along the streets of Jogya, safely and swiftly. You might not even talk to him during or after the ride. But if you would, you will discover that Harry is also a very kindhearted man with many unexpected sides to him. His usual spot is around Jalan Prawirotaman, a backpackers area close to the keraton of Jogya.

Harry is not like the other becak drivers. He doesn’t just speak our bahasa Indonesia, he speaks English and even Dutch quite well. He reads. He writes. It is of course in this that your trip around Yogya with Harry might become more than a simple from A to B becak ride; sharing ideas, stories and values as Harry pedals.

Harry’s level of education and his language skills set him apart from his colleagues. Most of his many customers are foreigners. That and the fact that he wrote a book about his life as a becak driver titled The Becak Way. His good relationship with people of all walks of life is proven in his book: the mayor of Yogyakarta wrote the introduction. 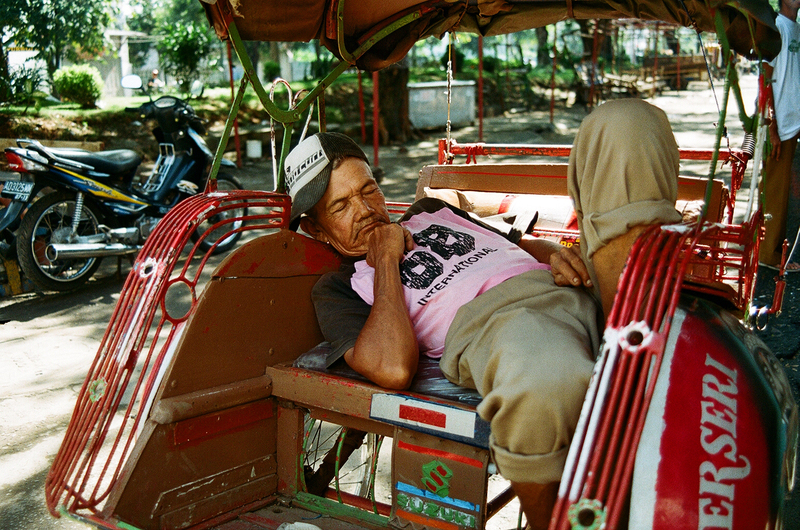 Most people sleep & relax during breaks, By: Eklesia Satyagraha

Instead of playing cards, joking, sleeping and relaxing during spare time, Harry would spend it writing; articles and opinion pieces that he sends to newspapers or posts on his blog, Blognya Mas Har, Hidup adalah proses belajar tanpa henti (Mr. Har’s Blog, Life is a never ending learning process). Anywhere he goes, he takes his hand-phone and laptop with him in his becak.

Harry is also quite social media savvy, tracing and keeping in touch with his customers here or abroad through Facebook, email and Twitter:

I always use Facebook, email and Twitter to relate my customers. I find it useful and rewarding to get a special segment of customers, particularly the tourists.”

He adds that many of his foreign customers prefer to contact him before they come to Jogya. It’s not just smart marketing and branding, at the same time it shows honesty and reliability. Harry relies on his social (media) skills as much as on his strong legs, that propel the becak forward. 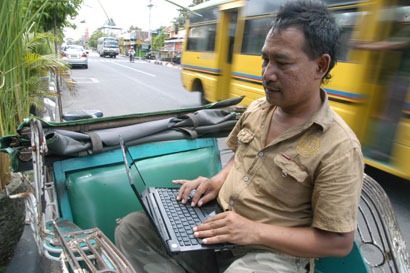 But not Harry, he prefers working on his laptop!

Becak drivers mostly rely on their muscles; you don’t need any education, special training or even a drivers license. All you need is strong legs and plenty of long capacity; enough physical strength to paddle the three wheeled vehicle forward, bringing your customers and their shopping bags and children everywhere they need. These characteristics make the becak drivers; economically, educationally, socially and politically marginalized.

Harry proves that becak drivers are not merely muscles. Becak driver have brains too. His book, The Becak Way is Harry’s reflection on his own work. “I try my best to improve the bad image of becak drivers commonly held by the foreign tourists. The reason is that the becak drivers focus more on their commission than on becak fare,” Herry explained last week. Becak drivers tend to abduct tourists on hour-long rides, to drop them off at batik factories, ‘art galleries’ and silver traders in the hope of striking up a commission. Needless to say tourists hardly appreciate this common practice and prefer to walk or take a cab.

Launching his book last July 5 on the Jakarta Book Fair, the book and Harry captured the heart of many readers. Hence, many institutions invited him to speak to different people on different occasions. “I use the opportunity to introducing my book, The Becak Way. The response was great; many people are enthusiastic to get my book.” Let’s hope all becak drivers will go The Becak Way! You can find Harry on Facebook to order a ride or just say hello. Don’t even think about adding him as a friend, because according to Facebook “this user already has too many friends.”