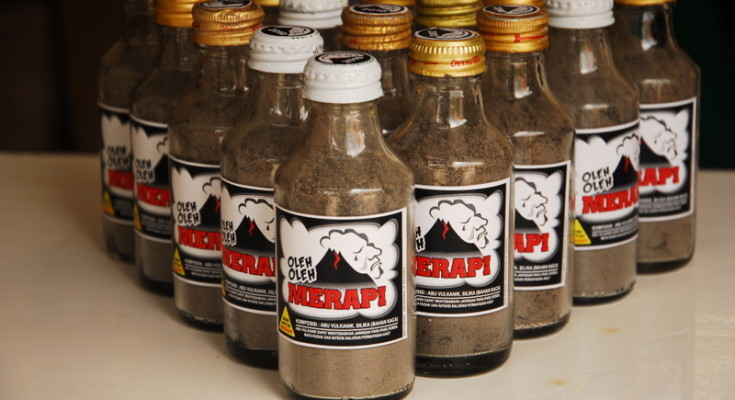 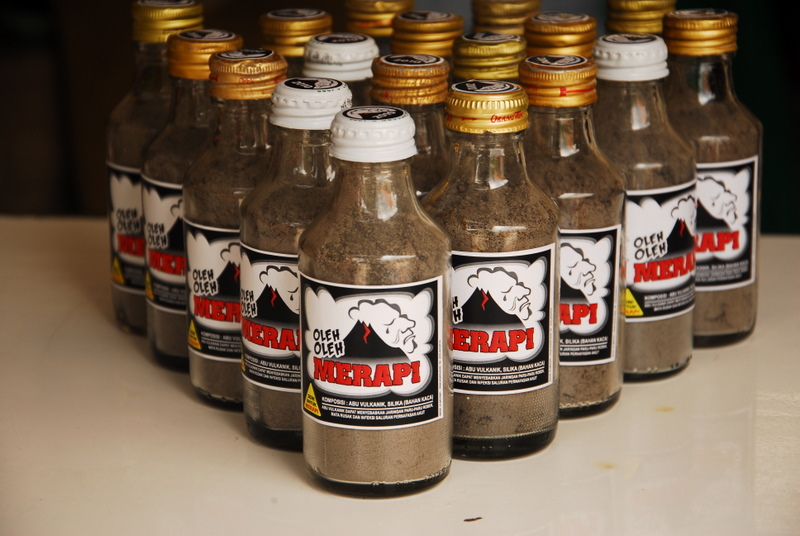 The breakdown of Berlin Wall 20 years ago gave way to a new initiative in German economic activity, particularly in tourism. Checkpoint Charlie, formerly a border post of West and East Germany, has become a renowned tourist destination. People sell brick leftovers of the Wall as big as two fingers put together, for 16 – 29,50 euros. The packaging surely doesn’t justify those prices: They put the bricks in transparent plastic bags.

Now, an almost similar thing happens in Indonesia. Some people in Yogyakarta, a city 30 km away from the recently erupting Merapi, have started to create souvenirs of the volcano: small-sized transparent bottles containing volcanic ashes with attractive packaging and an illustration of Merapi. The price is way cheaper than the Berlin bricks, only Rp 10,000 a bottle!

This creative idea is pioneered by Agus Budi Setiawan, a visual communication design post-graduate student from the Art Institute of Indonesia (ISI), Yogyakarta. At the beginning, he gave the souvenirs away for free to those who made donations for Merapi victims in the fundraising events carried out by ISI post-graduate students. 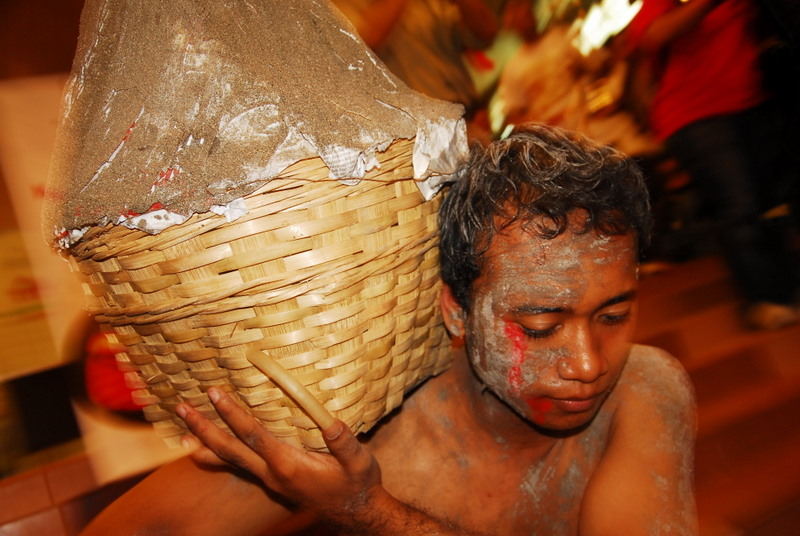 Agus Performance at Malioboro Mall, by: Anin A. Nugroho

One of the events was a contemporary art exhibition at the entrance of Malioboro Mall on 9 August 2010. There, Agus himself performed a theatrical act, expressing his art in dramatic gestures while carrying a miniature of Merapi Volcano on his shoulders. Volcanic ashes covered his body, making him look like a victim who had just escaped from the pyroclastic flows. His performance was accompanied by strains of music from woodwind instruments and percussion that created a sad atmosphere. Intrigued by the show, many mall visitors put money into the volcano miniature.

The fundraising event went on at different places and was closed with a series of events called “Holy Sale,” held at the badminton court of ISI on 19-20 November 2010. The total amount of funds collected in 10 days exceeded Rp 19 million. Obviously a lot of money and more importantly, it showed that Yogyakarta people care about each other. “Yogyakarta is an extraordinary city. The people are very appreciative of arts. I give two thumbs up to them,” said Agus, who had just been staying in the city for about two months.

Later on, they began to sell volcanic ashes as souvenirs in “Sunday Morning”, a temporary market open every Sunday morning in the campus of Gadjah Mada University (UGM). Moreover, they also marketed the souvenirs online via Facebook and Twitter, resulting in orders from other cities like Jakarta and Aceh. Foreign tourists were no less enthusiastic about the unique keepsakes. They were even willing to pay more—Rp 50,000 to 100,000 a bottle.

To warn people about the negative effects of the ashes, they attached a cautionary label similar to those found on cigarette packages: Volcanic ashes can tear the tissues of the lung, damage the eyes, and cause acute respiratory infection.This warning scared some people. On one occasion, a mother forbade her son to buy the souvenir, thinking that the ashes could be inhaled accidentally.

Agus never meant to make money for himself.  When he was selling the bottles in Sunday Morning, a man came up to him to ask for permission to imitate the idea. He allowed him to do so, as long as he would allocate some of the proceeds of the sale for donation. By encouraging such periodical and continuous donations, he aims to accelerate recovery of the victims. “This venture is a long-term act. We will keep on doing this and give all the money to the victims of Merapi explosion,” added Agus. 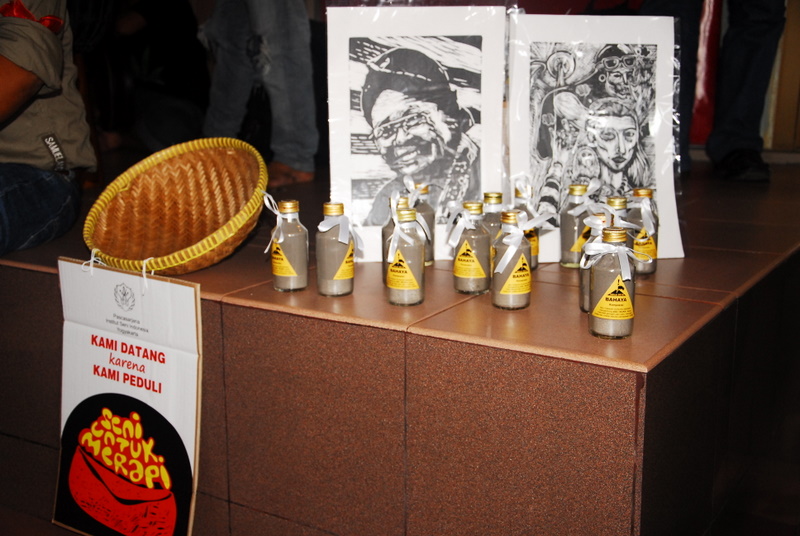 Display at Malioboro mall, by: Anin A. Nugroho

Intending to aid artists and art communities by providing art tools, Agus further explained that they are still surveying and collecting data of artists who live in the disaster area. But this does not necessarily mean they do not bother about things other than art. Indeed they do, but the way they see it, the people and government have given enough food and clothing—and the surplus has been accumulating in the refugee camps.

“We strive to prevent artistic activities from dying down following this disaster. Somehow, this is a positive act that we view as important in order to bear on our national identity,” explained Agus.

In bad times, there are always people who take advantage of the situation. What Agus and his friends have done, however, is a good example of how one could make use of disasters to help others. Therefore, one might say that a bottle of Merapi ashes is more valuable than a piece of Berlin Wall, at a fraction of the price!