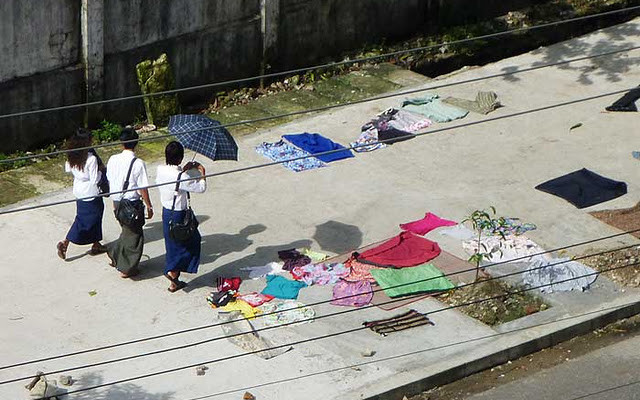 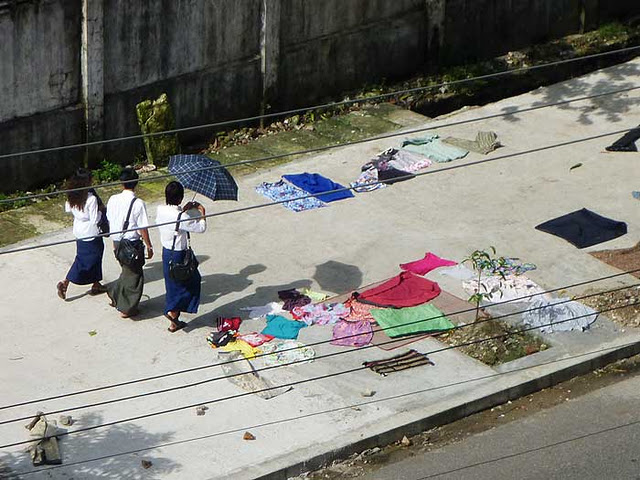 After days of rain, some sunshine to dry the wash

I first visited Burma in 1984 with my 13-year-old daughter in tow. Those days tourists were only issued a 7-day visa but we ended up staying 8 days because our Burma Airways flight to Kathmandu was delayed 24 hours and the airline put us up an extra night in the Strand Hotel, a colonial relic with musty charm. 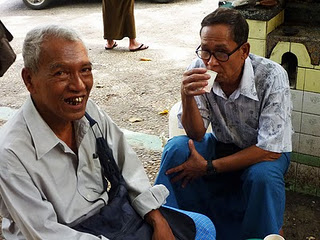 Burma in the 1980s was pretty much a timewarp reality – everywhere you looked you would find buses and jeeps from World War Two still plying the mostly untarred roads outside the urban areas. Coca-Cola was mercifully unavailable – except, perhaps, at the swankiest establishments.

Food and transport were cheap – if you knew the ropes. The official exchange rate for US dollars was about 7 times below the blackmarket rates – and every tourist arrived with a carton of State Express 555 cigarettes and a liter bottle of Johnny Walker Red Label whisky. There was such a demand for imported tobacco and alcohol, a streetwise backpacker could just about pay for a week’s stay if he knew where to get the best deals. 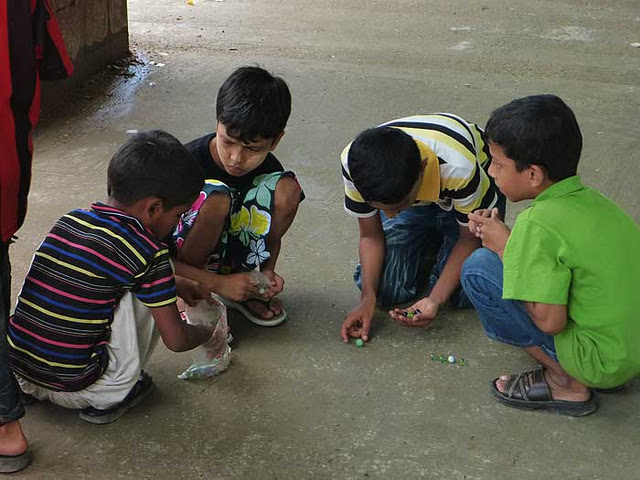 No Playstation...glass marbles on the sidewalk

Indeed, Burma was a prison economy (cigarettes and whisky serve as legal tender in every jailhouse anywhere in the world) – and most Burmese were prisoners of their own inept government, unless they were from the elite families. For one thing, their relative poverty made travel outside Burma an impossible dream for most working class folks. 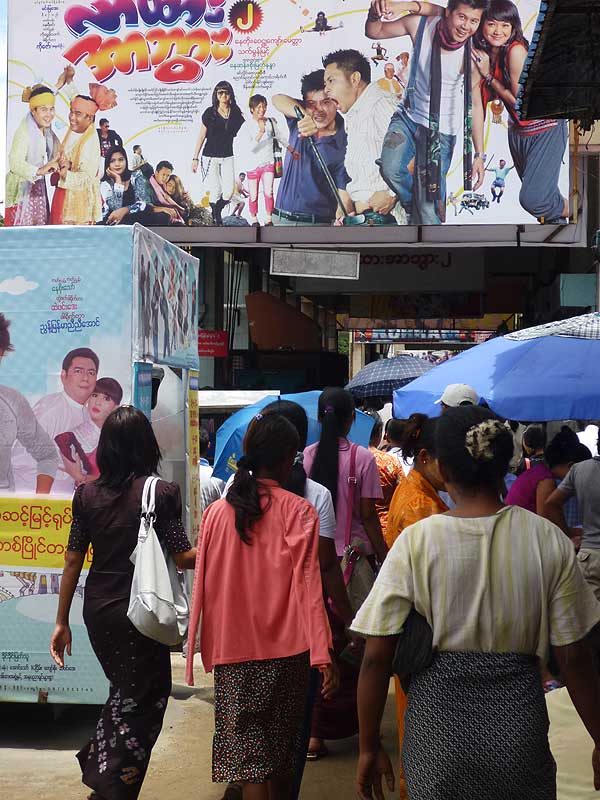 A thriving local movie industry... but Korean imports are a big hit with young Myanmar 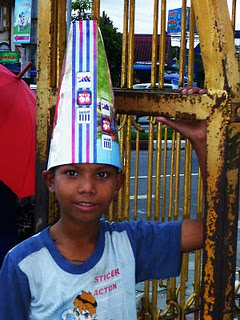 Kid at the entrance of Shwedagon

Notwithstanding their anal-retentive bureaucracy, the Burmese struck me as the friendliest, most likeable, and most sincere folk I’ve met anywhere in Asia (the Balinese come a pretty close second). Indeed, my daughter was so charmed by the young Burmese who flocked around her (believing she was a teenaged movie star from Hong Kong) she subsequently became a species of patron saint to Burmese refugees in Malaysia.

My second visit to Burma (now officially known as the Republic of the Union of Myanmar) was in August 2011. This time it was an even shorter stay, even though tourists are now issued 28-day visas, so I didn’t venture beyond a few streets in Rangoon (now Yangon). The trip was inspired by my young friend Arakah from Singapore, who was offered a 3-month contract to teach dance and drama in an international school. I figured it would be nice to drop in on her – and at the same time catch a quick glimpse of what Rangoon had become in 27 years.

The new Yangon international airport looks like any modern air terminal and I noticed well-lit highways where none existed. Lots more neon signs everywhere, even highrise buildings sprouting across the Yangon skyline, almost eclipsing the illuminated golden dome of the landmark Shwedagon pagoda. 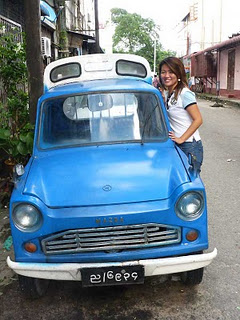 I was told that a few years ago the Myanmar ruling junta decided to double the salaries of all civil servants. The idea was to encourage the expansion of a new middle class – but the cost of living has also spiraled upwards, so I don’t know if life has improved at all for those on the lower rungs of the economic order. I got a lousy deal changing ringgits to kyats – they prefer Singapore dollars, and who can blame them?

The Korean influence has become visible – and young Burmese appear to copy their fashions from popular Korean movies. I’m sure China exerts a fair amount of economic influence, too, though I didn’t bump into any Chinese tourists. In fact, I recently read a report about 3,900 kilometers (more than 2,400 miles) of pipeline the Chinese are building to pump natural gas all the way to Yunnan. An estimated 30,000 people will be displaced by the pipeline. Saruman rules in Myanmar too.

Yangon in 2011 is no longer a cheap place to eat – despite the proliferation of street vendors hawking local delights like cold noodles and deep-fried pastries. A simple thosai meal today costs the equivalent of USD2 – and if you go for western fast foods, double that. 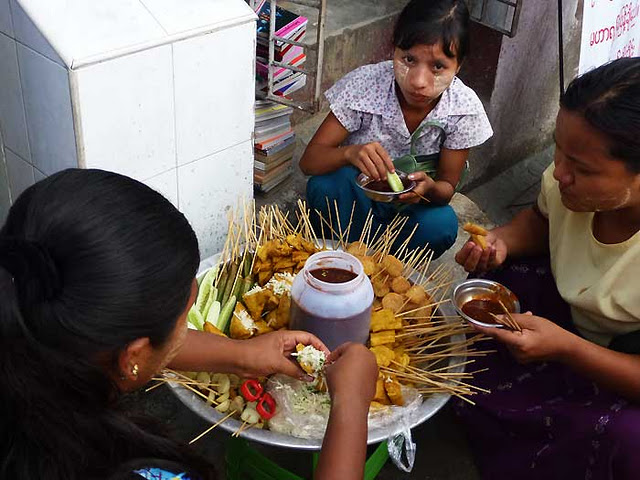 Burmese kebab on the go 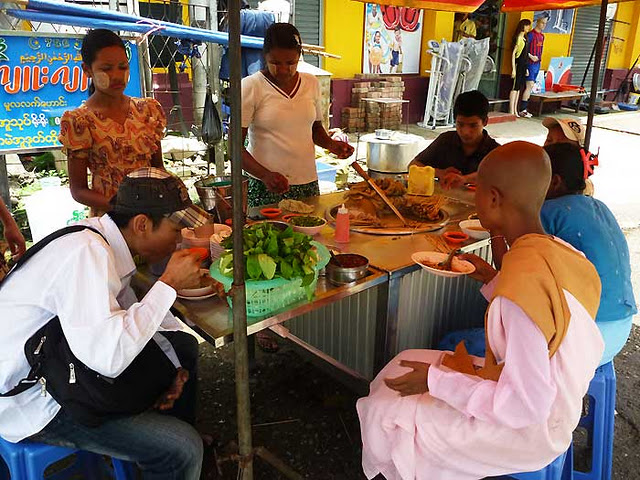 Roadside dining, routine for the locals, an adventure for tourists

I was informed that owning and operating a cellphone was a luxury in Myanmar. Nevertheless I saw cellphones and accessories on sale everywhere. Computer shops and internet cafes abound, too, but the Myanmar government uses Chinese firewall technology to block access to various sites – especially Blogger, just because some Burmese activist created a ruckus back in 1992 with an anti-establishment blog. 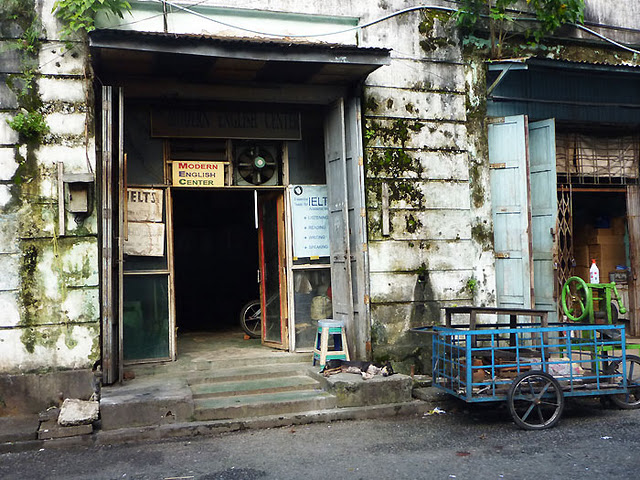 Walking past the Modern English Center...

Facebook, however, is accessible and fairly popular amongst the younger generation. English is less often understood in the streets of Yangon in 2011 than in 1984 – except among the elderly and the offspring of the prosperous elite. Those old enough to remember the days when Burma was under British colonial rule would be now in their 60s at least (Burma became independent in 1948 when the British left India). 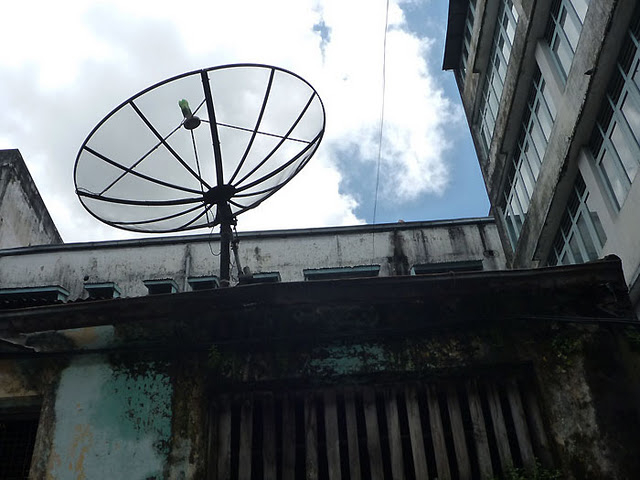 Tuning in on the world

And those with political connections would want to ensure that their children have access to a wider range of experience – thus the importance of mastering an international language. Everybody else under the military junta was encouraged to grow up culturally more insular, more nationalistic – and therefore easier to control.

Pretty much the same pattern you will find in any former colony – whether in Indonesia, Ghana, or Malaya – except in Singapore where available land is so limited the citizens have little option but to fully embrace cultural cosmopolitanism and, for better or worse, globalization. 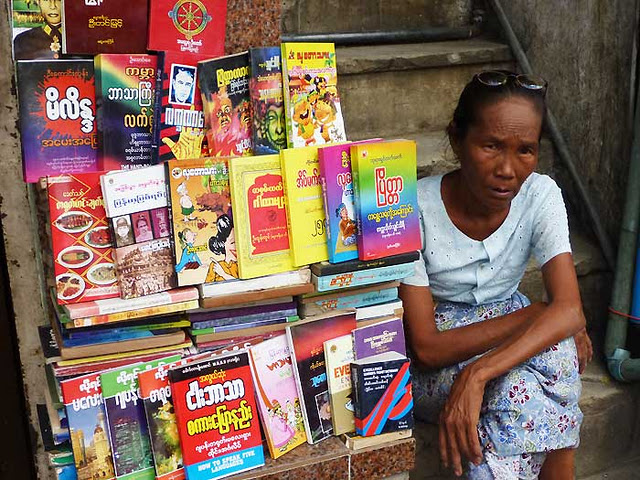 Burmese love to read... but business isn't too brisk for this sidewalk outlet 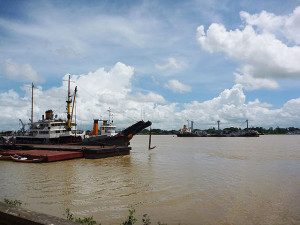 Wandering along the Yangon riverfront we got into a conversation with Raj, who said he was born a year before Burmese independence and worked most of his life as a linotypesetter for an English-language daily. Now he was earning US$80 a month as a driver for a restaurant owner. Like almost everyone I had a chance to chat with, Raj was yearning for better times: the return of Aung San Suu Kyi to political power and full civilian government was what the majority were dreaming of and silently praying for. While I was in Myanmar there were rumors of Aung San Suu Kyi holding secret talks with a faction of the military junta about ways and means to effect a peaceful transition.

Under the military junta the ordinary citizen felt powerless and completely at the mercy of petty bureaucrats – little Napoleons who abused their authority with impunity. The cab driver who delivered me to the airport on my way home was visibly nervous when dropping me off because some policeman or security guard was barking orders at everybody and totally throwing his weight around. In a country like Myanmar under the military junta, natural-born bullies can don a uniform and have a good time intimidating the meek. 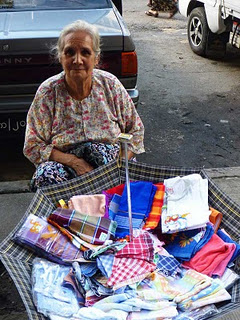 It’s fascinating that such gentle, gracious people can be transformed into big bullies as soon as they are issued a uniform and some official rank. The contrast between the romantic and warlike aspects of the Burmese psyche reminded me of what I noticed about the Cambodians.

As in Cambodia, Burma’s history began to be documented only in the 9th or 10th century CE. Prior to that it’s pretty much conjecture, although the Mon people are believed to have migrated to the Irrawaddy Delta during the Holocene period (about 12,000 years ago). We read about ambitious warlords unifying the country, subjugating the bewildering variety of remote tribes in the highlands, and threatening to invade Siam, a rival ancient kingdom.

I didn’t have the opportunity to venture beyond Yangon this time around – but I did spend a few days in Pagan back in 1984. It was then a dusty frontier town surrounded by a vast and desolate expanse of desert from which sprouted thousands of exquisite chandis and stupas dating back at least a thousand years.

Clearly, some demon king – having defeated all his earthly enemies and recently converted to the Buddha’s teachings – had wanted to prove his religious fervor and stake his claim on Nirvana by cutting down entire tracts of lush forest to build a monument to his spiritual ambitions.

Never mind if in the process he only succeeded in ruining the ecosystem and impoverishing his entire kingdom. 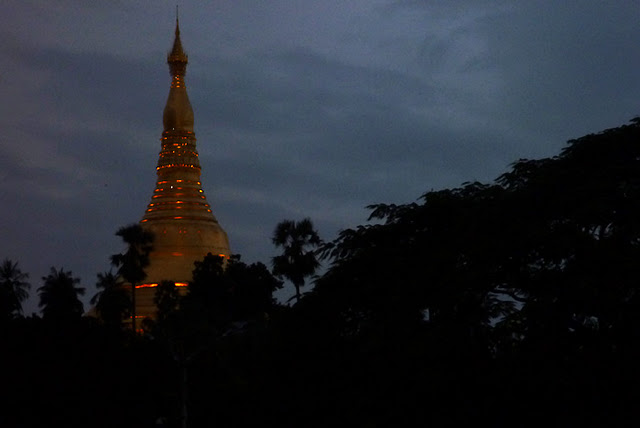 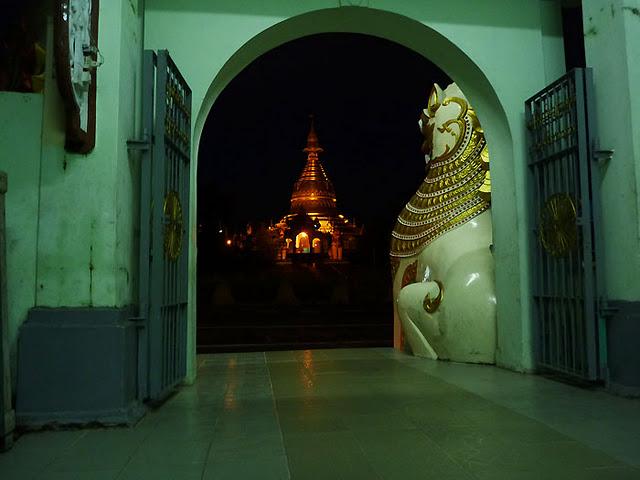 Shelter from the drizzle.. 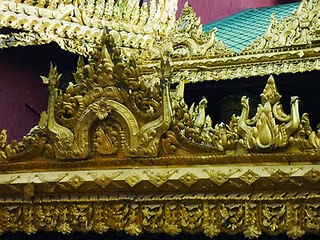 Such a simplistic and materialistic approach to expressing one’s religious zeal is aptly symbolized by the glittering splendor of the Shwedagon pagoda whose prominent dome is lustrous with a mind-boggling quantity of gold plates – not to mention the “5,448 diamonds and 2,317 rubies” that adorn its crown. The original 27-foot structure was built in 588 BCE, making Shwedagon the oldest pagoda not only in Burma but in the entire world. It was rebuilt and extended between the 6th and the 10th centuries – and again between the 14th and 18th centuries when it attained its present height of 368 feet (including its spire).

A few hundred yards from the Shwedagon, on the fringes of a half-abandoned recreational park, I stumbled upon some of the most squalid homes I have ever encountered in my life. I believe more than half of Myanmar’s 58.8 million population have lived at this level of poverty since time immemorial. 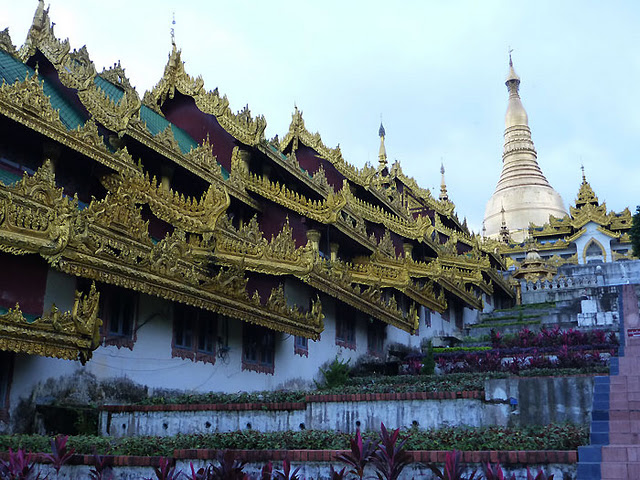 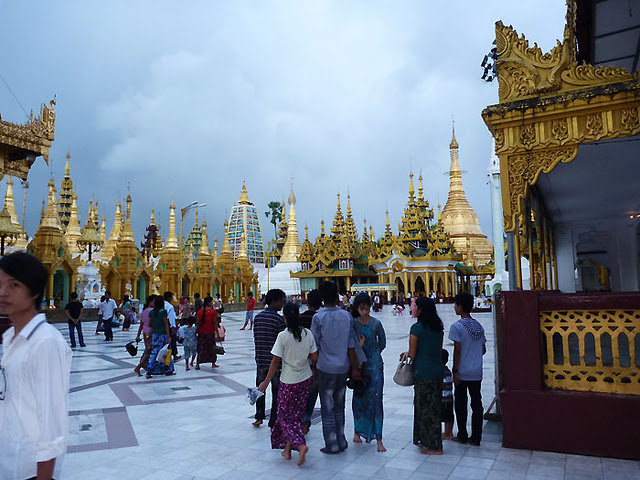 Unearthly splendor amidst the squalor 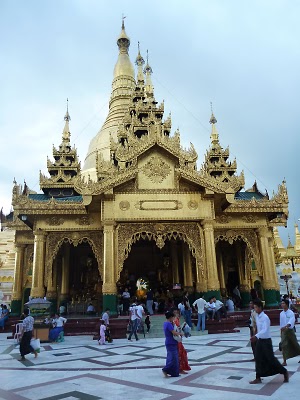 Gold donated by generations of Burmese

And yet, the visitor to Yangon cannot walk more than 10 minutes without encountering some magnificent edifice of worship – be it a pagoda, a temple, a church, or a mosque.

It appears that whatever the average Myanmarese may lack in worldly wealth, they more than make up for it in terms of faith.