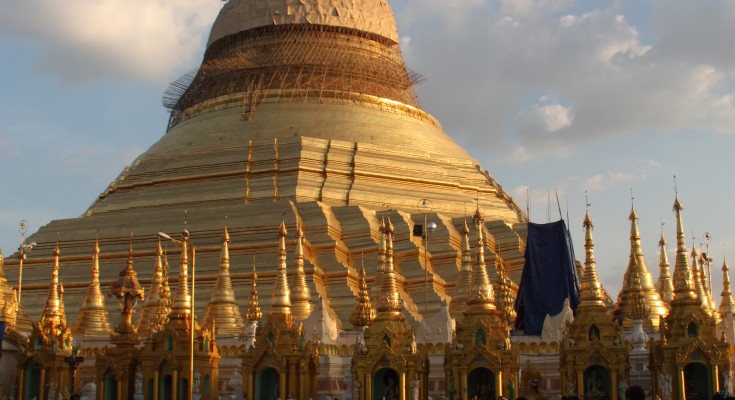 Signs of Change: Traveling through Burma

Willem van Gent and Willy van Rooijen are a Dutch couple that traveled through Burma. They share their experiences of the first signs of change on Latitudes.

In the fall of 2010 we find ourselves in the south of Laos. In the lobby of our hotel at the Mekong we watch the news that the house arrest of Burmese opposition leader Aung San Suu Kyi (66) has been lifted. We decide there and then that Burma will be our next destination.

December 2011. To our surprise getting a visa for Burma at the Bangkok embassy is going very smoothly. And we are certainly not the only ones who want to go there. It is almost impossible to find a room in the capital Yangon.

Changes are in the air but nobody knows how fast the reformist process the new president Thein Sein has started, will go on. We stay a few days in Yangon and do the things all tourists do.

We walk around and enjoy the street life, with the tea houses, the small stalls, the sounds and smells of a city where people spend a big part of their days outside. Of course we visit the famous Shwedagon pagoda.

People in the tea houses and sometimes even on the street talk about the changing political situation but they are still cautious. The signs of change are small but unmistakable. In a few shops we find the picture of Nobel Prize winner Suu Kyi and her father, general Aung San, leader of the independence movement against the British.

This national hero was murdered by political opponents just before the country became independent on 4th of January 1948. Shop owners look at us proudly and put up their thumbs when we look at Suu Kyi’s portrait in their shops.

We leave Yangon by bus to Inle Lake, one of the touristic highlights of Burma. After 13 hours we climb into an open truck that brings us from the bus stop to a hotel in Nyaungshwe at the lake. It’s five in the morning and pretty cold. We do as the Romans do and take a ride on a longtail boat on the Inle Lake, where we admire the fishermen with their peculiar way of rowing, the floating gardens and visit some tribal markets, quite a few pagodas, all sorts of traditional home industries like weavers and blacksmiths. 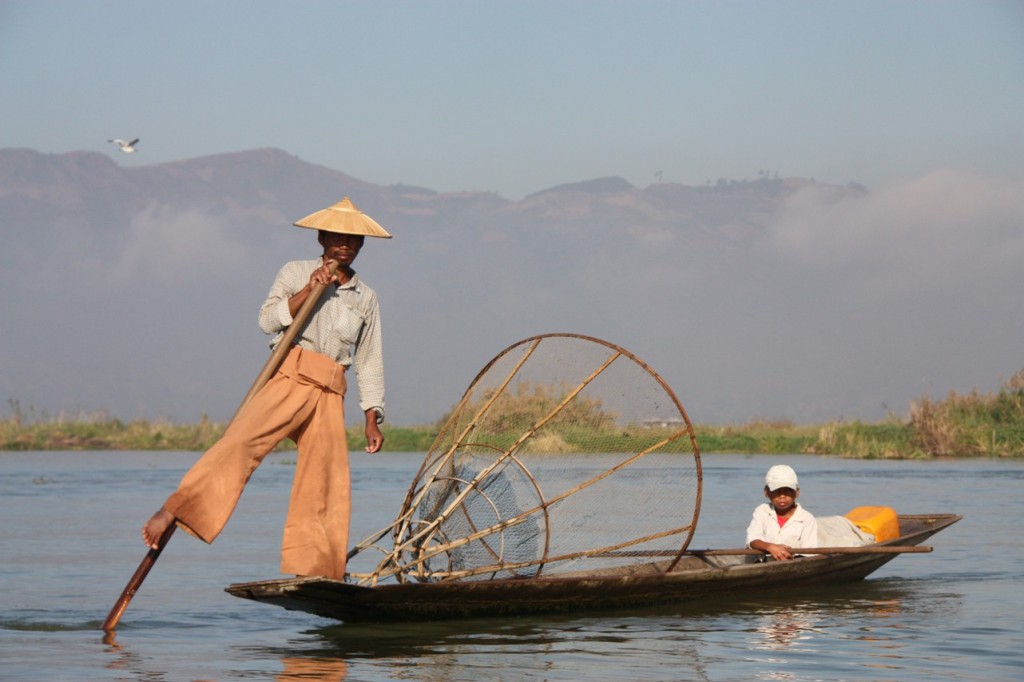 Our guide looks like he has a hangover from the day before chewing his sirih (betelnut) which he buys at every stop we make. The day on the lake ends with us looking at the sun going down, our guide half asleep and the young boatman practicing his English aimed clearly to be used on tourists like us.

As we enter a luxurious resort after a hot and dusty bike ride along the lake, the owner of the place invites us for  tea and biscuits. She appears to support the NLD the party of Aung San Suu Kyi. She took part in the demonstrations of 1988 when a lot of people took to the streets to demonstrate against the regime. She is moderately optimistic about the recent developments, not agreeing with the party on every issue but a strong believer that change will come step by step.

We have developed a strange habit of taking buses that arrive at dawn so that’s what we do when we arrive in Mandalay. Our pleasant guesthouse is in the quiet northern part of the city. The owner is in her seventies and is a strong lady, once a history teacher at the university who stopped lecturing after the military crushed student demonstrations in 1988. “So that is why I have no government pension.”

Top attraction in the former British capital is climbing Mandalay Hill, a 45 minute walk up a lot of barefoot steps to the top where everybody, Burmese and tourists alike, watch the sun going down coloring the mighty Irrawaddy river orange. You may also visit the Mandalay Palace and Fort, surrounded by a huge moat. Provided you are interested in banners that tell you the army – which has a big camp within its walls – will crush anybody who comes between them and the people.

Meanwhile the country is overflowing with government representatives and businessmen (is there a difference?) from all over the world, among them big players like the USA, China, India. It looks like they all want a piece of the cake that is this country, rich in minerals, oil, gas and other goodies.

We take a shared taxi to Pyin Oo Lwin with two Burmese ladies who keep silent during the entire trip. They are dropped off next to an army camp where “the triumphant elite of the future” is trained. Apart from that, Pyin Oo Lwin is the town where the British moved their administration during the hot summer. It’s a cool place with a lot of English buildings still standing, some in bad condition, others still used as hotels or schools. Here too we find more photographs, calendars and other items with the images of the Lady and her father Aung San.

You can take a ride around the city in a decorated horse cart. Instead of an ordinary taxi we use this old-fashioned way of transport to the train station, where our train waits to takes us to Hsipaw.

We never had a train ride like this before. The train moves very slowly, we have a seat in the Upper Class on a cushion, a luxury that passengers in Ordinary Class have to miss. Each time the train goes a bit faster it starts to jump and we are bouncing up and down. Utterly slowly the train creeps over the famous Gokteik Bridge, about 100 meters high over a deep ravine. A century ago this technical miracle was constructed in 1901 by The American Pennsylvania Steel Company. Everybody in the train is very excited but at the same time as relieved as we are when we reach the other side. 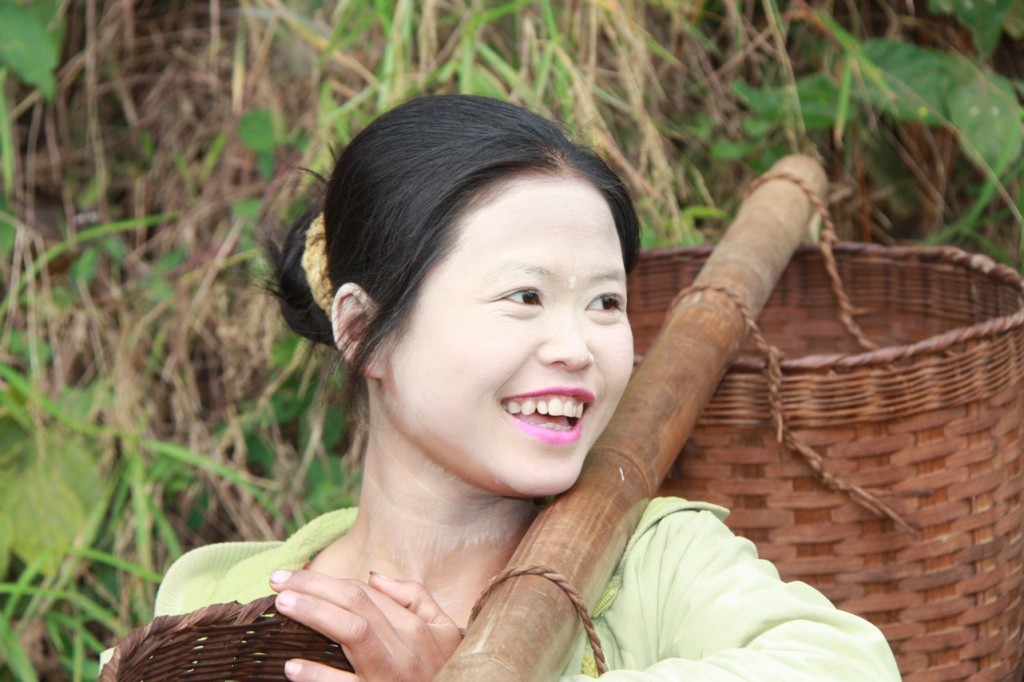 A great smile by a Hsipaw lady

Hsipaw is our next destination. We are received by Mr. Charles, owner of the hotel that goes by the same name: “Welcome, you have come to the right place.” His place is a meeting point where treks are organized, where you find the latest village gossip and where you can hire a bike.

We hang out a few days, eating in Mr. Food’s Chinese restaurant, drinking tea in the garden of Mrs Popcorn, looking at books at Mr. Book’s store and having a talk with Mr. Independent (born in 1948, in the year of independence). On a one-day trek of 10 hours we are guided by Mr. Palaung (named after his Palaung tribe). We go up and down the hills around Hsipaw, where we visit a few villages on the way. We meet with the Palaung people, an ethnic minority to which our guide belongs. On our walk we see the impact of a big pipeline, under construction, that will bring gas and oil to China. This project brings unrest among the local Shan people.

There is no love lost for the Chinese. “We will become China”, a retired salesman tells us. Plastic is used to speed up the growing of watermelons. “This land is owned by a man from China, who does not live here. They use fertilizers and pesticides, in a hundred years nothing will grow here anymore,” says our guide.

During a break amidst tea plantations he tells us that about two weeks before, the Burmese army and the Shan separatist army had an armed clash. “Sometimes we come across Shan militants. But don’t you worry, as tourists you will be not be harmed at all.”

We also hire a motorbike from Mr. Bike, another name for Mr. Palaung. A good bike, but halfway up the hill we get a flat tire. Actually we were looking for the local weavers but now we are looking – in vain – for a bicycle repair shop. Finally someone takes us to a very friendly farmer’s family. The son repairs our tire and his mother invites us for lunch, just like that.

Washing clothes in the Irrawaddy river near Bagan

You cannot visit Burma without paying a visit to Bagan with its more than 3000 pagodas, with a history of kings and wars. Don’t ask yourself how many pagodas you can take in. Rent a bicycle, like us, or take a horse cart. It happens to be full moon, which means that there is a big religious festival going on around the Ananda, the oldest temple. Burmese from all around have come to Bagan to celebrate, sometimes spending the night in their oxcart. There are plenty of food stalls, a fair, dances are performed and of course monks take part in the event. Amidst all the festivities we find a stall of the Aung San Suu Kyi’s NLD party where t-shirts and portraits are as popular as religious items.

Back in Yangon it looks like things are changing more rapidly than before in Burma. The day we leave the country 651 prisoners are released, among whom prominent political leaders. And a peace treaty is signed with Karen separatists. On this last day we visit the NLD office in the capital where we buy t-shirts, calendars, posters and other souvenirs. Some time ago it was not possible at all to visit the party office. Because of a taxi driver who lost his way we just miss the lady herself who left the office 5 minutes earlier.

We have a talk with one of the founders of the party. The old man, a former political prisoner, is still a bit skeptic about the good will of the government but he trusts the present leaders of his party.

We leave the office and get into a taxi.  The driver is all smiles and tells us: “I love her. The lady is the only one who can repair this country”. 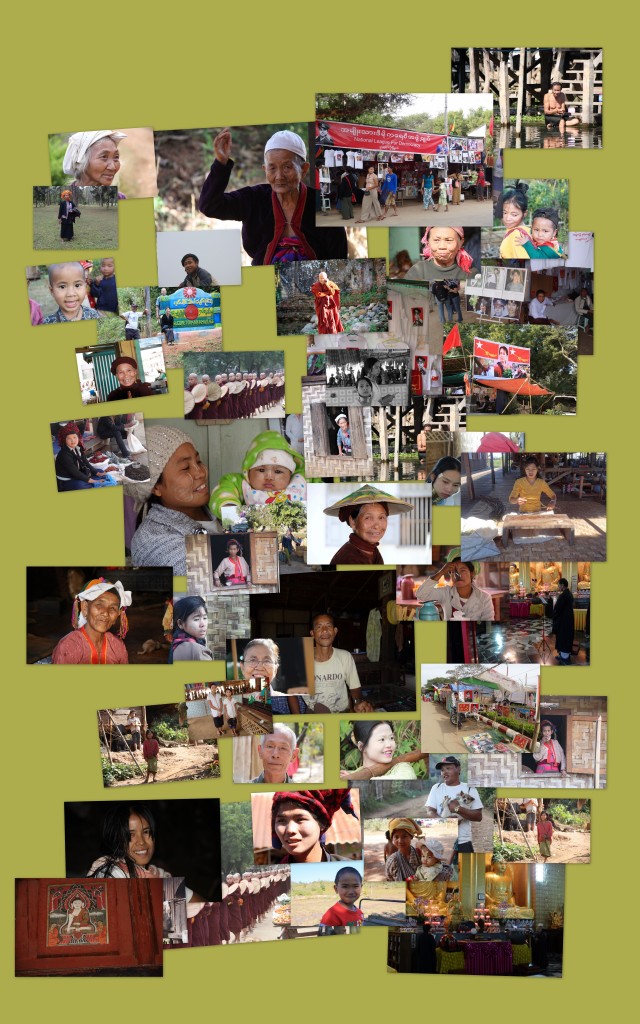 Burma, a country with many faces

After four weeks traveling I’m a bit confused about all the recent developments. But I also have the impression that it is irreversibly going into the right direction. There is a lot of optimism in the air, the atmosphere is vibrant.

I hope Burma gets more freedom and democracy. But I also hope that when I come back here I can still eat on the street, still see all the colors and still smell what I smell now. So please McDonalds, KFC and Starbucks stay away. I know this is an idle wish.