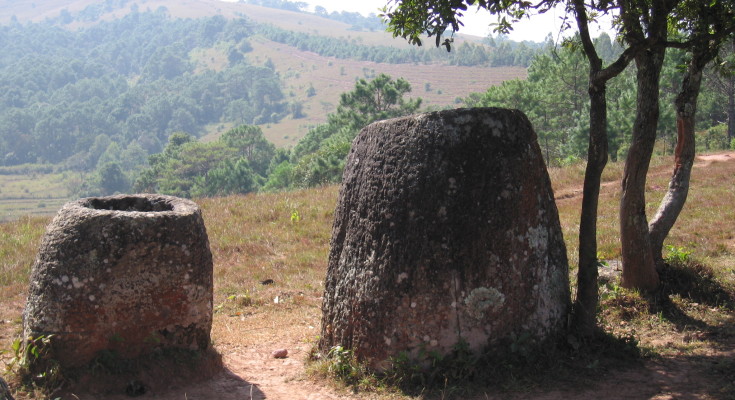 Secrets of the Plain of Jars. Traveling Laos 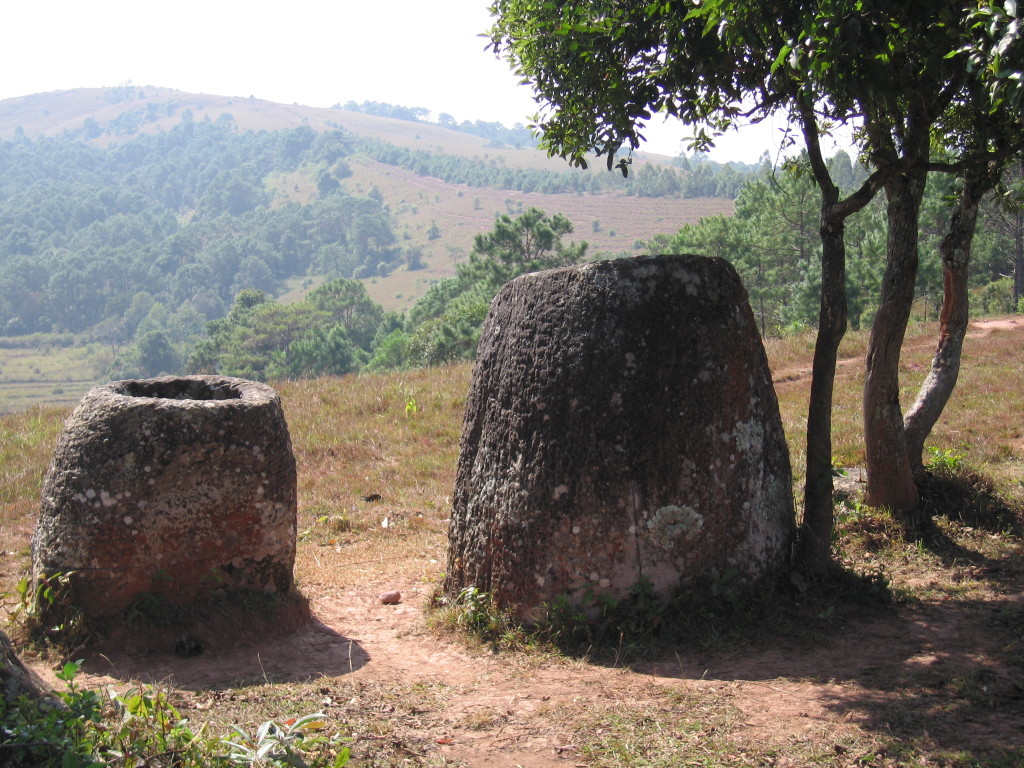 Boom! Loud explosions resound during our visit to the Plain of Jars in northern Laos. This  tourist attraction near Vietnam owes its fame not only to the thousands of mysterious jars, a prehistoric heritage still shrouded in mystery. The ancient site also bears the relics of a more recent legacy: a dangerous collection of unexploded bombs still littering the plain.

It is still chilly as we have breakfast in the garden of our guesthouse Kong Keo in Phonsavan. The village is located at 1100 meters altitude in the heart of the famous Plain of Jars. Thousands of mysterious, often man-sized megalithic stones of at least two thousand years old are scattered on this Laotian plateau. The evening before we arrived in the remote northeastern province of Xieng Kouang. Phonsavan is the province’s new capital, the old one now a ghost town because it got badly damaged during the Vietnam war. From the capital of Vientiane it is a long eight-hour bus trip with innumerable bends, but definitely worthwhile because of the varied landscape with spectacular limestone mountains.

Our host Kong is warming himself at the fire place, made from an old American plane tank. Huge missiles are on both sides of the entrance gates. ‘I brought them from my native village. Of course I checked first if they were detonated,’ laughs Kong.

Walking in the main street of Phonsavan we see more Secret War paraphernalia. Large missiles are an eye-catcher in front of a restaurant ironically called Craters. On the other side of the street  is the office of MAG, The Mines Advisory Group. This is an international non-governmental organization focusing on clearing the mine fields and educating the local population how to deal with this sad legacy. In the 1960s and 70s the US dropped more (cluster) bombs in Laos than in the entire second world war.

In the yard of the tourist office rockets and grenades are piled against the walls. Inside there is a poster inviting tourists to make a day trip to War Bracelet Village. ‘After the Secret War we made spoons from the bombs that have caused havoc at our lives. Later we turned bombs into beautiful bracelets.’ On the bustling local market we buy some of these recycled war relics, eating sticky rice from bamboo tubes surrounded by exotic food like skewered squirrels and rats. 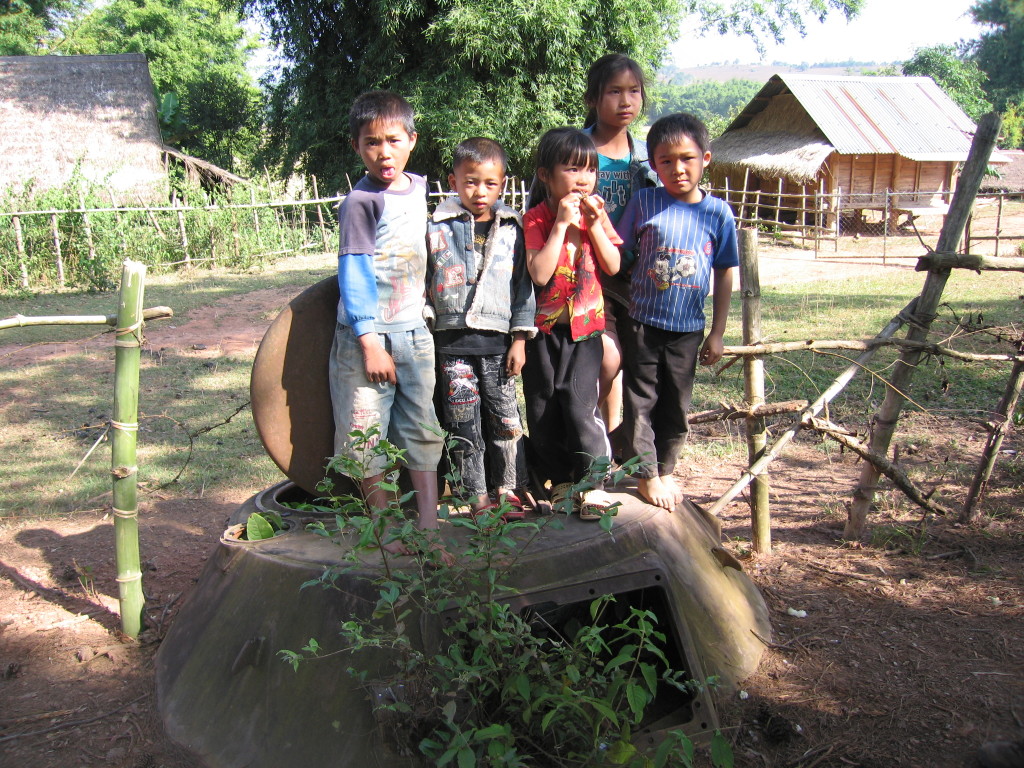 A Tourist Attraction in a Mine Field

Not far from Phonsavan there are three key jar sites accessible to tourists. We are quite impressed by the strange heavy relics still shrouded in mystery. Some jars are clustered together under trees; others gathered at the top of a hill offering beautiful panoramas of paddy fields. All but or two of the jars are open and empty. We start our trip with Site no. 1, with over three hundred jars the largest site and the first that was cleared by MAG.  ‘It was very important to promote tourism for the sake of the local economy,’ says Thoumy, our young guide. We pass some trenches and bomb craters. But we feel safe on the paths that are lined with red and white MAG-stones meaning that they have been cleared. Suddenly we hear the sound of explosions. ‘No problem,’ Thoumy shouts. Foreign delegates from the International Convention on Clusterbombs in Vientiane, have come to visit the sites here. And especially for them some unexploded bombs are being detonated. As long as you stay within the MAG-lines everything is ok.’ Thoumy tells us he has an uncle who was killed by a bomb. ‘He was clearing his field before planting rice. The problem is that sometimes during the rainy season bombs come to the surface.’ Yet Laotians cannot resist the temptation to hunt for ‘bombies’ as these are called in Laos, to sell scrap metal from the bombs. At least half of the victims are young boys. Thoumy:: ‘We have more boys than girls in our family. That is why our parents moved to the city. They were afraid that I and my brothers also would risk our lives.’

Many theories abound about the origin and meaning of the jars. Who made them? How did they get here? The jars weigh tonnes and none are made from local stone. And what is their purpose?  Some archeologists think that the jars are urns. The French archeologist Madeleine Colani made the first systematic study. In the early nineties Laotians and Japanese archeologists found human remains and burial offerings in and around the jars. They confirmed Colani’s theory that the bones and artifacts she found refer to funeral urns. But still not all secrets around the dark jars have been revealed.

Before returning to Phonsavan we visit a Lao Lao brewery. In the shed where the local whisky is brewed we see an elderly Laotian woman nearly completely disappear into an oil drum. After a while she resurfaces and offers us a glass of Lao Lao. We hesitate; it is the middle of the day. ‘Well,’ Thoumy says, ‘it doesn’t matter. You can drink Lao Lao any time of the day.’ And while sipping our Lao Lao he tells us a popular Laotian legend: ‘2500 years ago king Khoun Chueang was fighting a long war with a ruler who exploited the people. After the king’s victory he ordered the construction of large jars to be used in making Lao Lao to celebrate the victory’.

With mixed feelings we leave Phonsavan and the Plain of Jars. On the one hand we are impressed by the mysterious jars on this beautiful plateau. On the other hand we are struck by the scars left by the Secret War. Back in Vientiane we watch a TV report on the International Convention on Clusterbombs. An American delegate expresses her concern: ’Just to think that up until this day people still get wounded or killed by these bombs. It absolutely blows you away!’ It is more than ironic that during the conference a Laotian girl in the countryside was killed by a bomb. It is not difficult to predict that she won’t be the last one.

TAGTravel Willy van Rooijen
Previous Post How to effectively build your business in East Asia. Book
Next Post You May Have Been Living in Thailand for too Long