SBY, president of the Republic of Indonesia 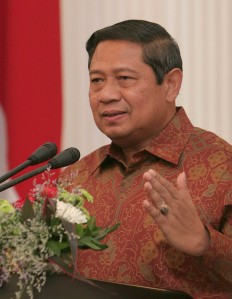 Susilo Bambang Yudhoyono, also known as “SBY”, is the president of the Republic of Indonesia. In the first ever direct president elections, in 2004, he became the sixth president of Indonesia. Since then, he managed to bring economic and political stability to the worlds third-largest democracy. For the future, SBY foresees an increasingly important role for Indonesia in the world.

Before becoming president, SBY made a career in the military. This career started in 1970, when he joined the military academy, graduating 3 years later. He quickly rose in ranks in the army. Some argue that his marriage to Kristiani Herawati, the daughter of a powerful general, might have helped him with that. During his military years, he was was sent to the US several times to attend a number of military trainings. Also he had several tours of duty during the early years of Indonesia’s occupation of East-Timor. He was accused of comitting war crimes during his service in East-Timor, but never charged.

From 1999 till 2004 he served as Minister in the succesive cabinets of presidents Wahid and Megawati. After the Bali bombings in 2002 he gained international reputation. As Coordinating Minister of Political and Security Affairs, Yudhoyono was responsible for the hunt and capture of the Bali-terrorists. In this role, abroad he was perceived as one of the few Indonesian politicians to be serious about the War on Terrorism.

As a Minister, Yudhoyono reformed the military, aiming to move the army away from the political arena. Also, he put a stronger focus on professionalism and education. Due to these efforts, he became known as the ‘thinking general’. When in 2004, he won the presidency defeating Megawati, it would be the start of a progressive era.

His first term as president was characterized by steady economic growth, a slowing inflation and serious efforts to fight corruption. President Yudhoyono, holding a PhD in economics, quickly gained a reputation as a man of integrity and principle. Noted for his polished television performances, SBY was –and still is- perceived as a strong leader. For many Indonesians his open communication and accesiblity is a major change in comparison to the old authoritarian regimes.

However, it wasn’t an altogether smooth ride for SBY. After his reelection, the global crisis seemed to have left Indonesia largely unscathed. Still, SBY is firmly sandwiched between the GOLKAR party (part of the coalition) and the Muslim oriented parties, who stir up the dust before it has even settled. Too much compromise often leads to paralysis that can stand in the way of any serious reforms. SBY is walking a tight rope, with not much room to manoeuvrer.

Relationhip with the Netherlands

Also, SBY focused on better relations with its former colonizer the Netherlands. For decades, the relationship was never without controversy. Under SBY’s presidency, the ties between the two countries seem to strengthen. Recently SBY planned the first state visit of an Indonesian president to the Netherlands, since 1970.

John Wattilete, president of the self-proclaimed “Republic of the South Moluccas” (RMS) residing in the Netherlands, however, strongly opposed to such a visit. According to him, the president of Indonesia had to be arrested for human rights violations in the Moluccas. Wattilete even issued legal proceedings to have SBY arrested upon entering the country. Although the Dutch government declared an arrest was out of the question, SBY the president cancelled his visit.

A future for Indonesia

In the second -and last- term of Yudhoyono’s presidency, attention shifted to Indonesia’s international position. His international politics focusses on the areas of peace, anti-terrorism, democracy and economic development. With this focus, SBY is trying to put Indonesia forward as an emerging leading country in the world.

As a democracy and the world’s most populous Muslim nation, Indonesia already plays an important role in the fight against terrorism. Moreover, the country has a enormous economic potential. If that will materialize, will largely depend on the guidance of President Yudhoyono. The visit of Obama in November 2010 was a solid first step in US-Indonesian relations.