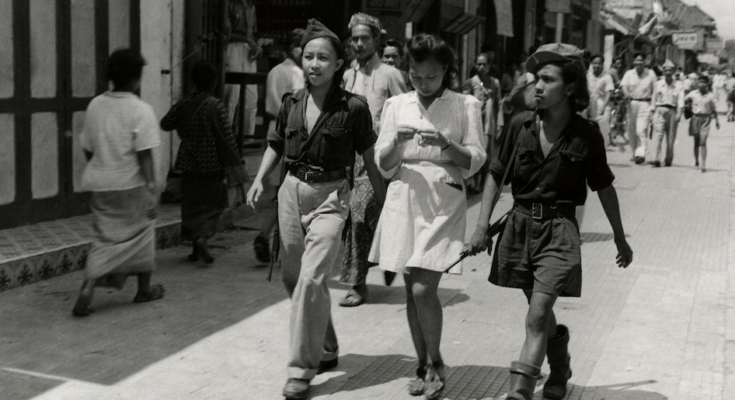 The Rijksmuseum presents Revolusi! Indonesia Independent, from 11 February to 5 June 2022. The exhibition – curated by Dutch and Indonesian curators – offers an international perspective on the struggle for independence of Indonesia during the 1945-1949 period. The focus is on people who experienced the revolution at close quarters: fighters, artists, diplomats, politicians, journalists and others. Their individual experiences reflect a history with many faces and many voices.

The Indonesian revolution had an important part to play in 20th-century world history, with Indonesia being one of the trailblazers on the road to decolonization and independence after the Second World War. Many countries would follow in the next two decades.

The more than 200 objects on display – with loans from Australia, Belgium, United Kingdom, Indonesia and the Netherlands – are witnesses to this turbulent past. From privately-owned keepsakes to paintings loaned out for the first time by Indonesian art collections.

The exhibition includes photographs and documents such as posters and pamphlets that were confiscated by Dutch military intelligence agencies in this period. We are able to exhibit this historical material for the first time through a partnership with The National Archives of the Netherlands. 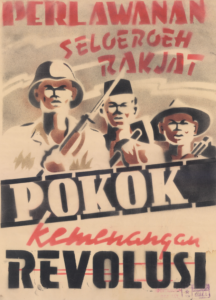 Revolusi! begins with Sukarno’s declaration of Indonesian independence on 17 August 1945. The closing chord is Sukarno’s triumphant return to the country on 28 December 1949, the day after the transfer of sovereignty by the Dutch. The exhibition focuses on the period between these two events, on the spirit of the revolution and struggle for the future of Indonesia. It explores subjects such as nationalism, youth, anti-colonialism, art, war and diplomacy, propaganda, renewal, the information war and refugees. The thread running through the exhibition is its focus on the experiences of 20 individuals – each at a different location, and each with their own background and political standpoint.

The revolution was a period of experimentation and creativity for Indonesian nationalists. Artists, in conjunction with politicians, formed a modern revolutionary vanguard. Paintings hung in government buildings to represent the Indonesian revolution. The streets were alive with posters, graffiti and pamphlets. Art served as a political instrument to propagate Indonesian independence at home and abroad. Politically engaged Indonesian artists depicted subjects such as comradeship, leadership, armed combat, the fervour of youth, and militancy. This joint effort by the people of Indonesia established the defining image of the revolution. In the exhibition works are on display by Trubus Soedarsono, Sudjojono, Otto Djaya, Basoeki Abdullah, Hendra Gunawan, Affandi en Henk Ngantung.

Yogyakarta-based artist Timoteus Anggawan Kusno (b. 1989) is making an artwork especially for the exhibition consisting of objects in the Rijksmuseum collection whose origins can be traced to the colonial period, evoking and giving voice to the decades-long resistance that preceded the Indonesian revolution and the consequences of the colonial experience in today’s world.