May to October is Indonesia’s dry season. By the end of October, though, the rains are approaching and the pressure mounts. Last year in Bali, the sun stung our skin and the night-time heat was oppressive. Although it’s hard to remember when we’re drenched now, people say that Bali’s getting hotter every year. 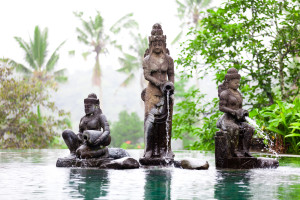 Nyoman Wargita came out of his house in Jalan Katrangan, Denpasar, his face wet with perspiration. Bare-chested and wearing only a sarong, he carried a crying child in his arms: “Kleng… it’s so hot,” he said, “My child keeps crying and can’t sleep because of the heat. The Denpasar climate feels like a desert.”

May to October is Indonesia’s dry season. By the end of October, though, the rains are approaching and the pressure mounts. Last year in Bali, the sun stung our skin and the night-time heat was oppressive. Although it’s hard to remember when we’re drenched in January, people say that Bali’s getting hotter every year: “Before, the dry season wasn’t like this. The days used to be warm enough, but the nights were cool. But now, day and night are just as hot as each other,” said Ketut Setiawati, Wargita’s wife.

Still sweating, Wargita offered an explanation: “This is because there are so many trade expos being held in Bali. They’re using special lasers to chase away the clouds, so the rains don’t come.”

Scorching sun? Expos? Lasers? What’s this about? The trend for setting up public trade and industry expos took off in the last decade. All sorts of things are sold at expos: household items, furniture, clothing, electronic goods and food products. There are stands selling motorbikes, bicycles, children’s toys and even real estate. They’re really the place to see and be seen these days. Some of the stalls are located outside, while others are under cover. Either way, the organisers favour clear weather. Rain clouds chase away customers. So expos usually have a generator connected to a laser machine, which send rotating beams high into the clouds. At night, the laser-beams can be seen from far away and they have become a feature of urban Bali’s sky at night.

Bali’s most famous expo used to be located on Jalan Gunung Agung, in the far west of Denpasar, but years ago the site was moved to Jalan Hayam Wuruk, in the east of the city. Expos are also held in Sesetan and Kuta. They are hugely popular and are now being staged outside the capital as well. “Just think—there are all these expos now, all using the lasers. No wonder the weather has been so hot,” said Wargita.

Made Armaya, a friend of Wargita’s who works at the municipal office in Denpasar, said that the mayor, Anak Agung Puspayoga, banned the all-night use of lasers at expos, limiting their usage from 7pm to 10pm. “Many people complained that the weather was getting hotter because of all the lasers. I heard that Pak Puspayoga was also suffering from the heat in his house.”

Darmawan, a neighbour who goes to a private university in Denpasar, gave me this analysis of how the lasers work: “The lasers are filled with ions that can sweep away the other ion particles in the rain clouds. Because the beams are directed up to the sky, the clouds get pushed further away. That’s how the rain clouds get cleaned.” He said he learned this in his high school physics class.

Gede Ardana, Darmawan’s friend, thinks this hypothesis has been proven: “I always go to expos with my wife and children. Sometimes, if I have money, we buy something, but usually we just walk around and enjoy the cheap and cheerful atmosphere. To start with, I didn’t believe Darmawan’s story about the laser beams repelling clouds and stopping the rain. But now I’ve seen the proof; one rainy day I went to an expo and on the way there, it was pouring, but the area around the expo site was completely dry. So there you are.”

Although Ardana agrees that the anti-rain lasers are effective, he also worries about their impact. And it’s not just that the lasers make the weather hotter. He is concerned that his grandfather, who is a professional rain-stopper (pawang hujan), isn’t getting much business these days: “Before, my grandfather was often asked to stop the rain before the opening of outdoor events—things like trade expos, religious ceremonies and open-air music concerts. He was once asked to stop the rain for a concert given by Sheila on 7, that famous band from Jogjakarta. But now people rely on the lasers.”

Intrigued by Ardana’s story, I visited his house in Batubulan. There were a number of people in pakaian adat (traditional Balinese costume) waiting to request the services of Pak Likés, Ardana’s grandfather, to ensure good weather for their child’s marriage ceremony. To begin the ceremony, he checked that the offerings were correct and started to sing a special rain-stopping mantra. Then he lit a kerosene lamp and readied a sapu lidi (broom made from the spines of palm fronds) by sticking chillies on the ends of its spines. After completing the mantra, he hit the ground several times with the sapu lidi.

What was the connection between the lamp, thumping the chilli-speckled broom and controlling the weather? Pak Likés just told me that it has always been that way. “The lamp has to be guarded to make sure it stays alight for the duration of the ceremony. If it goes out, it will rain,” he explained.

Knowledge of how to stop the rain has been passed down from generation to generation. Balinese people, with the frequency of their outdoor ceremonies, have appreciated this skill for just as long. But recently, requests to influence the weather are thin on the ground. Pak Likés accepts this with good humour: “My grandchild tells me that there are new machines to stop the rain now. They say that they are made in Japan. Rain stoppers like me can’t challenge Japanese technology, just like Indonesia can’t compete with making motorbikes and cars.”

But when the monsoon comes, it comes. Neither lasers nor sapu lidi can hold back the rains forever.