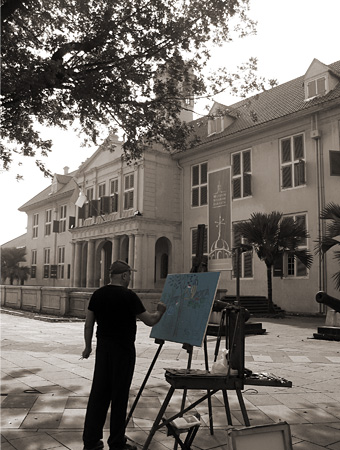 Paul Husner in action in Jakarta

Swiss born Dutch artist Paul Husner has a solo exhibition in the Agung Rai Museum of Art (ARMA) in Ubud. Born in 1942 in Basel, Switzerland, Husner divides his time between Amsterdam and Bali. Paul Husner first visited Sanur in 1985 and fell in love with Bali instantly:

“I fell in love with Sanur because of its light, be it the light in the garden, the light on the coming waves, or the subtle arrangement of light that clears up the sky and enables me to see the majestic Mount Agung in that far, far away place. That’s why I decided to stay and work in Sanur.”

At the opening of the exhibition on the 9th of June, a book was launched written by dr. Jean Couteau, titled “Paul Husner Paintings of Bali; Sanur and Beyond – Seaside Encounters Between Human and Men.” Paul Husner’s exhibition and the book launch marked the celebration of ARMA’s 15th anniversary.

His style can be described as expressive. Natural light and vivid colors play an important role in his work. To read more about Paul Husner, go to his website http://www.paulhusner.com. Visit the Agung Rai Museum of Art online at http://www.armamuseum.com/ and in real life at JL. Pengosekan, Ubud, Bali, Phone: 0361)975742