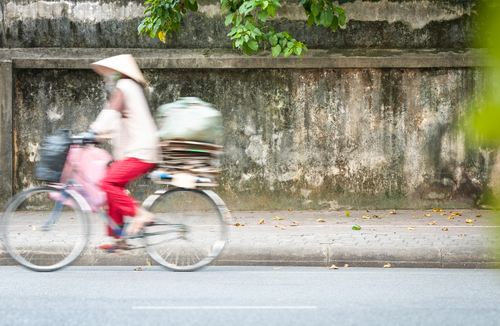 Pagar: fencing off life in Indonesia 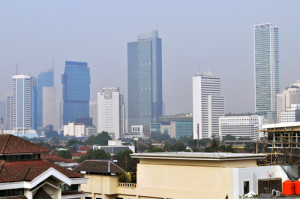 Between the lanes in the heart of Jakarta, my childhood friends strove to spy over the highest house fences. It’s still fresh in my memory; they called them rumah gedongan (mansions). Our image of a ‘rumah gedongan’ was a high-fenced house, closed, so that we could only see the roof. Certainly a house like this would be owned by someone rich. To the eyes of children, the rumah gedongan was something mysterious, so naturally we tried very hard to scale or peep through the gaps in the fence to see what lay beyond. Often a guard dog would start barking when we tried to approach. These houses sometimes had warning signs posted on the wall—“Beware: Vicious Dog”. The dog need bark only once and we’d run, scrambling and laughing, from the scene. When I was a bit older, I often heard cynical adults gossip about people who owned houses with tall fences. “People who live in gedongan houses are sure to be Chinese, tuh. They don’t want to mix. Arrogant. Hard to get money from them for the Independence Day celebrations.” This is the empty chatter that I frequently heard from the mouths of Jakarta housewives.

During the turmoil of the nineties, when Indonesians of Chinese descent (warga keturunan Tionghoa) were attacked and their property plundered, my childhood memories came back to me. Recalling the women’s comments, while watching the local people (orang kampung) pillage through the homes and shops of the Chinese, made the hairs on the back of my neck stand up in fright. The seeds of this racism had been implanted when we were small, and then became symbolized by houses with high walls. The automatic association of Chinese Indonesians with high walls is certainly buried deep in the mind of Indonesian society, despite the fact that we know that the building of fences is just a logical consequence of urban development. This is clearly not an ethnic issue. The notion of space becomes meaningful in urban areas when social relations weaken and feelings of insecurity become more intense.

In Indonesia, and particularly in Java, the concept of fencing has been known longest in coastal areas. Civilizations developed earlier on the coast because of the trade taking place in the ports and harbors, an activity which also facilitated cross-cultural meeting and exchange. So it’s little surprise that in coastal areas the population is denser and that the boundaries between people’s properties are made clearer. It was from the protection of these territories that the concept of fences and fencing emerged.

This differs from the culture of the hinterlands, where regional boundaries are not so distinct. With the concept of the ‘center’ as an activator of life, regional boundaries are more often defined in terms of how far the center can assert its power. This concept is usually expressed in the form of ritual processions (kirab) and the parading of royalty. The roads where the raja (king) passed were the boundaries of his territory. So, it makes sense that parades were very important to the central Javanese rajas of the past, because that is how they established the boundaries of their power. The further the distance covered by the parade, the larger the area of power. According to Ir. Mahatmanto, a lecturer in Architecture at Kristen Duta Wacana University in Jogjakarta, the symbol of the jasmine blossom (bunga melati), which is found on the outer fortress walls of the Jogjakarta Kraton, is a symbol drawn from the idea of ‘aroma’ (bau). It was hoped that the aroma of the Kraton’s power would spread everywhere; that its power would be pervasive like the aroma of the jasmine blossom, whose sweet scent can be smelled from afar. 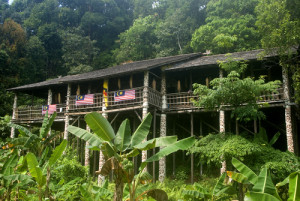 The concept of invisible boundaries is also expressed in village settlements in the Javanese interior. If we go from village to village, fences don’t seem to be an important issue. Someone can just hang out their washing to dry in a neighbor’s yard, or wander in to take some herbs that they need for the kitchen. This strong communal tradition is also found in Flores. In Wolotopo in Ende, for example, strong kin relations mean that boundaries don’t need to be made around the territory of houses. Fences are usually used to protect a group of houses belonging to a single clan. Usually, they build fences from plant materials. The fences that surround Dayak longhouses in Kalimantan are also made of whatever is available, such as ditches and thorny bushes—although the height of the longhouse itself acts as a kind of barrier, defending the inhabitants from outsiders.

These days, however, relations are breaking down, particularly as people move to the cities and start thinking in terms of private property.

In the cities, where patterns of living no longer follow along the lines of extended family, and even nuclear families are split up, fences become very important. The richer a person is, the higher and more sturdy a wall they can build to protect those inside. Choosing a certain type of fence can also be a display of social status. Fencing as a marker of social status was evident from the time when Java shifted from Hinduism to Islam, a time of massive urbanization and trade that produced a wealthier class of people. These people exhibited their wealth, and the frequency of their contact with Chinese traders, by setting Chinese ceramics into their walls. Something of this trend persists. At the outset of the New Order in the 1970s, for example, a new ultra-rich upper class developed (along with the concept of ‘real estate’) around areas like Pondok Indah in Jakarta. Most of the new houses during that period had ornamental iron railings with sharp points (although there was also a Roman-style, whose houses had thick white outer walls). Those iron fences sometimes caused problems for passers-by. One house, in Cikini, Menteng in Central Jakarta had an iron fence that stood a meter-and-a-half tall, spiked at the tips and curved outward into the street. Five people had already been injured when the local population finally attacked the fence during a demonstration. Soon a new concept in real estate developed—residential complexes without fences, to offer a more comfortable-looking environment. And yet, these complexes needed even tighter security and even higher fences around the periphery to protect the inhabitants from those outside.

Because of feelings of insecurity in Jakarta, ‘supernatural fence’ services (jasa ‘pagar gaib’) have emerged on the market. The pagar gaib-making service is offered by the Yayasan Nuryifa, which operates in the district of Menteng Raya in Central Jakarta. This yayasan (foundation) offers supernatural ‘fencing’ (pemagaran) to protect office buildings, private houses or other valuable assets. These fences are not only for guarding against thieves, but also black magic (santet), which might be used to harm someone. We can read about this protection on their website at http://www.pengobatan.com/

Pagar gaib for you and your family:

Protect yourself, your family and those you care about from all sorts of things you want to avoid.

Protective pagar gaib for your home, shop, office or other assets:

Make your building/shop/home a pleasing, safe and comfortable place to be,

Give a feeling of peace and happiness to the inhabitants; not (over) emotional, seldom loud, get rid of suspicious feelings, fear and such.

Protect, free from disturbances from supernatural beings, jin, and other creatures that like to disturb people.

Protect, from evil intentions and thieves.

Protect, from epidemics, catastrophes and other frightening things.

Invite fortune to enter more swiftly, making us happier and calmer through our life’s course…

How to install your protective supernatural fence:

First of all, your home/building/shop will be examined for the presence of supernatural beings, which, if present, must be thrown out.

Because these beings are usually mischievous, they really enjoy disturbing human beings in a variety of ways, including:

Antagonizing people’s feelings so that they become short-tempered and angry, resulting in frequent arguments, or they can become lazy, sad, or light-fingered and prone to stealing.

So be sure that your supernatural fence is installed soon so thatno more evil beings can enter.

The installation method is quick and doesn’t take much of your time.

Don’t wait until you’re sick because you’ve been struck by black magic before you install your protective fence,

Get your umbrella before it rains.

This excessive fear is not limited to Jakarta. It seems that almost every city in the country has been given a ‘fencing project’ (proyek pagarisasi). In Jogjakarta, for example, even the smallest parks at the corners of sidewalks are fenced off. The government is apparently afraid that their parks will be damaged by pedestrians. These fences are also to control public space: to get rid of peddlers and wandering food vendors (pedagang kaki lima) who often use the sidewalks as their sales arena. It’s even funnier in Jakarta. The vast Silang Monas Park, where the national monument has become a Jakarta landmark, has suddenly been caged by a three-meter high fence. Sutiyoso, Governor DKI Jakarta, explained that this was to provide security for the presidential palace, and other important offices around Medan Merdeka West and South, from being over-run by demonstrators. After the collapse of the Soeharto regime in 1998, there was a huge surge in the number of demonstrations. The public saw that demonstrations were an effective means of expressing their dissatisfaction to those in power. The odd thing was that instead of improving its performance, the government was building a fortress against the populace. The cost of keeping the public out of this public space is thought to be nine billion rupiah of public money.

It’s not only the government that’s building these fortifications. Other powerful individuals in Jakarta have started fencing off their business assets. Afraid that the unrest and rioting of the nineties could happen again, they’re spending a lot of money on three- to four-meter-high fences, with spikes and barbed wire, like the Bank Indonesia building on Jalan Thamrin in Central Jakarta. The ITC Manggadua shopping center with its multi-story car park, is all fenced off. Indonesia promotes itself as a friendly and tolerant country. But this fencing off of everything, in response to ever increasing fear, sends out the opposite message.