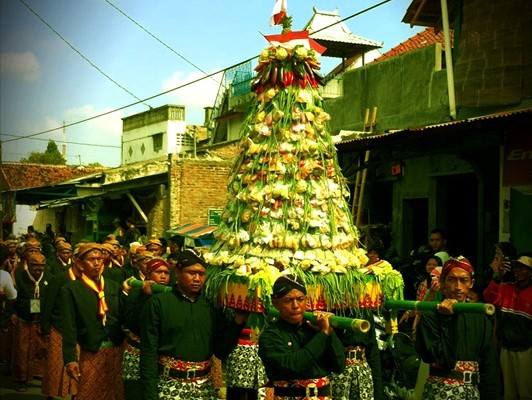 For the people of Dusun Clapar—a hamlet in Kulon Progo regency in the Special District of Jogjakarta (DIY)—giving thanks for the bounty provided by Sang Pencipta (the Creator) is considered crucial to their continuing welfare. The majority makes their living as farmers; they work the land and harvest its fruits to meet their daily needs and sell in the market. But the hill-country beyond the Menoreh Mountain range is plagued by extensive topsoil erosion. In the dry season, many villages across the region are afflicted by drought. When the rains come, the earth cannot soak up the excess water and landslides occur. 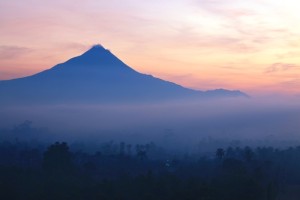 By Vichie81 at Shutterstock

The residents of Dusun Clapar use a variety of tactics to counter these challenging natural conditions: not taking too much wood from the forest; planting crops that don’t require much water; harvesting wild fruits to supplement their earnings; and expressing their gratitude for every successful harvest through a thanksgiving ritual called Nawu Sendang (lit: ‘cleansing the water source’).
Nawu Sendang, which has been performed for generations, is also a way for the villagers to cherish and conserve their freshwater springs (sendang), which they believe ensure their health, prosperity and safety. Samiran, a sixty-seven-year-old village elder, explains that the rite is equally critical for sustaining the spirit of the community. “Nawu Sendang is held every two years,” he says, “to prevent kirih [loss of enthusiasm or disheartenment] among the people of our village, but it is also a way of expressing our feelings of gratitude to God.”
The rite is held every other year on a Jum’at Kliwon (a Friday falling on the fifth day of the five-day market cycle in the Javanese Pawukon calendar), which coincides with the month of Rajab in the Islamic Hijri calendar.
Sudarjo, a leading community figure in Clapar, recounts the legend behind the first Nawu Sendang. It is said that there was once a holy person named Kyai Klopo, a faithful follower of Prince Diponegoro, who led the guerrilla war against the Dutch in these mountains between 1825 and 1830. Kyai Klopo was reputed to have magical powers (kesaktian), which he acquired while practicing asceticism under an ara tree (a kind of fig tree, known in Javanese as kipik), which was situated near the present-day hamlet of Dusun Clapar. One day, from the crevices between the roots of this tree, a spring appeared. The water that flowed from it was abundant—and it has never run dry to this day. Known as Sumber Rejo (‘source of prosperity’), this perpetual water source is credited with giving the village its fertility.

Kyai Klopo was able to communicate with beings from the invisible world. He made an agreement with them that, after his death, they would continue to protect the prosperity of the village that had been established on the spot where he meditated. The invisible beings agreed to take care of Sumber Rejo on one condition—every two years, a Nawu Sendang rite would have to be carried out. The inhabitants of Dusun Clapar fulfill their part of the bargain by inviting tayuban dancers from Wonosari (in Gunung Kidul Regency, DIY) and by staging jathilan performances (with male dancers who ‘ride’ rattan hobby-horses) to complete the rite.
Tayuban is a raucous, mostly improvised, style of social dancing with erotic overtones. It is performed by female entertainers known as ledhek, who sing and dance, often inviting male members of the audience to join them. In community thanksgiving rites like Nawu Sendang, tayuban is sometimes performed twice—once for the ancestral spirits and once for the entertainment of the local people. During the jathilan, the men dance themselves into trance—astride their hobby-horses, which are said to symbolize Kyai Klopo’s mount—as a vehicle for reaching the ancestors and securing their blessings. 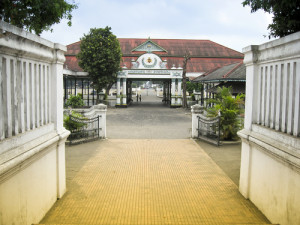 On the day of the rite, Dusun Clapar’s residents dress up in their best pakaian adat (traditional clothing)—the women in batiks and kebaya (formal blouses), their hair neatly knotted into buns; the men in Javanese surjan (a kind of coat), batik cloths and blankon (headdresses). This tiny hamlet, with its population of seven hundred, is resplendent with the brightly colored ceremonial clothing of its inhabitants.
Before the sun has risen to its zenith, several carloads of local government officials arrive. According to Sudarjo, they have been expressly invited by local community leaders to witness the event in order to ensure that it attracts moral, as well as financial, support from local government. “We also invite friends from the press to cover it,” he says, “We are really convinced that this tradition of ours has touristic value of unbeatable interest.”

The people sit, calmly waiting, in Pak Dukuh’s yard. It is not long before the Nawu Sendang is opened with welcome speeches from Pak Dukuh and several of the officials, lending the proceedings an atmosphere of government-style ceremony. After the speeches, the people form ranks 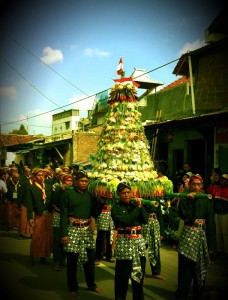 according to their respective roles: the jathilan dancers; several sesepuh (elders); the caretakers of the spring; and the ledhek all stand two to a line and start the procession. The women of the hamlet—carrying trays of food to be blessed—and the rest of the villagers follow behind.
After walking about a kilometer, the crowd arrives at a dip in the hills, shaded by a clump of ara trees. Here, at the base of the largest ara tree, is Sumber Rejo. The spring is protected by a bamboo roof and encircled by a fence. Not far from the tree there is a special raised platform made of cement, the stage where the gamelan and ledhek perform. The large group of elders, dancers and basket-bearing women position themselves on the stage, forming a circle. In the middle of the stage, a variety of dishes are laid out side by side; every resident has brought some food to be offered in prayer and receive blessings. There are tumpeng—ceremonial dishes of yellow rice cones accompanied by a range of side dishes; white rice molded into bowl-shapes and topped with garnishes of sliced carrot and tomato; and ingkung—whole fried chickens. Later on, all this food will be consumed during a feast called the kepung wakul.
After a while, an elderly man steps into the middle of the stage. This is Mbah Tani, the caretaker of Sumber Rejo, who lives in Kali Ngiwo, on the northern side of the hamlet. In a shrill voice, he opens the rite with a salutation and intones mantras in Javanese about the history and purpose of Nawu Sendang. This is followed by prayers and then the offerings are placed under the ara tree. These are the core proceedings of the rite.
Suddenly the gamelan strikes up. All at once, three ledhek approach centre-stage and begin to sing Javanese poetry. In coquettish voices, they invite people (almost always men) from the audience to dance, luring them onto the stage with a flick of their long scarves. Meanwhile, not far from the stage where the ledhek are dancing, the jathilan troupe is lining up in preparation. Ten dancers representing the horses and another two wearing wild boar costumes stand by, awaiting the cue from their whip-wielding leader.

The audience assembles close to the stage. They are not only from Dusun Clapar; spectators and refreshment vendors have also turned up from surrounding villages. One of the main attractions of this ritual— the tayuban—has a special significance for the people here. Throngs of young mothers, carrying babies or toddlers, approach the middle of the arena whenever the ledhek finish a song—to ask them to kiss their babies. In exchange for a small offering of money—between Rp 2000 and Rp 5000—their babies will be showered with kisses. The kiss of a ledhek is said to ‘tolak sawan bajang’, or ward off young children’s illnesses.
Preparations for Nawu Sendang begin a week before the event. Funds are raised communally, with each household head contributing a minimum of Rp 7500. Sudarjo acknowledges that the rite is quite expensive: “Just paying the ledhek costs Rp 2 million—and this is before covering the fees for the jathilan and other performers, not to mention the costs of transportation, refreshments and all the rest.”
Nevertheless, he tries to ensure that the rite is carried out as it always has been. He considers the tayuban and jathilan dances to be the most important part of the process. People say that these have always been performed, at the explicit request of the ‘inhabitants’ of the Sumber Rejo spring.

“Once we held a Nawu Sendang, but because of budget limitations we tried replacing the tayuban with an orkes campur sari [a popular orchestra that synthesizes various genres, from classical gamelan to dangdut] and we didn’t invite the jathilan. This was because it was all so expensive at that time. But then what happened? The spirits of our ancestors were angry. Many community members fell into trance. An ancestral spirit communicated, through one of these possessed people, that they wanted the ledhek from Wonosari and the jathilan,” Sudarjo explains solemnly.
This experience reaffirmed for Sudarjo that the details of the rite must never be changed: “However costly the Nawu Sendang may be, we persist in our fundraising, whether by gathering money collectively or by looking for local government or commercial sponsors,” he says.
The sound of a call to prayer from the mosque signals that it is time for Sholat Ashar, afternoon prayer. The spectators gradually drift away from the performance arena. The vendors start collecting up their wares. The rhythm of the gamelan begins to weaken as the musicians grow weary. This first part of the rite will soon come to a close; but organizing committee announces that later in the evening there will be another party for the community, with wild tayuban dancing until sunrise.