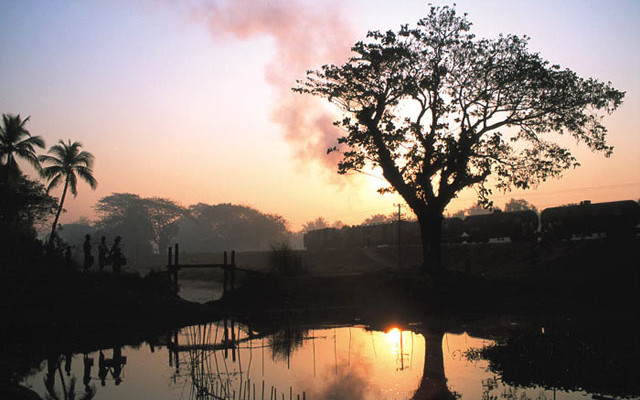 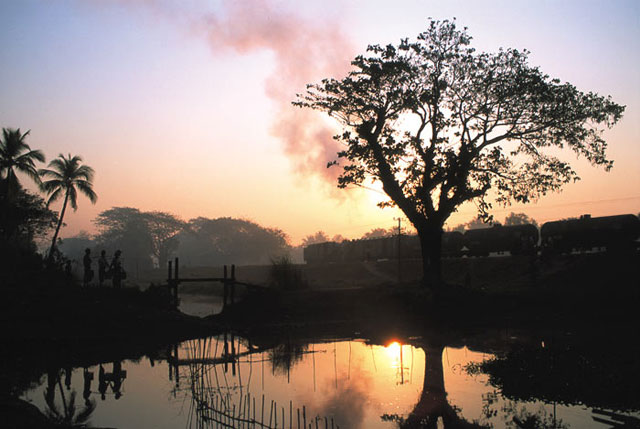 After decades of isolation, Myanmar is opening up to the rest of the world. Virtually unknown outside South-East Asia, Myanmar’s cuisine is now being discovered by an increasing number of visitors, as well as those fortunate to have a rare Burmese restaurant in their city. So is Burmese food just rice and curry? Is it true they don’t just drink tea, but also eat it? Are Myanmar dishes too simple, spicy, oily or sweet?

For starters, if you look on a map you will see that Myanmar is located between three gastronomic superpowers: India, China and Thailand. As you would expect, there are Indian, Chinese and South-East Asian influences on the food you find in Myanmar, but Burmese cuisine is quite distinctive, and not just curry and rice.

Sure, steamed white rice is the foundation of many meals, but travelers to Myanmar are often impressed with the variety of food available not just across the country, but at each meal. Let me explain. When you order a curry, hearty salad or noodle dish, you’ll get a spread of accompaniments: pickled vegetables, fermented beans, fried shrimps, onion and chilli, raw fresh vegetables and dips, fresh herbs like mint and pennywort, and a paste made from salted fish or shrimps called ngapi. In fact ngapi is more than a condiment, being the base for many mains, salads and soups. Also often served free with many meals is a simple black pepper soup.

Now you are probably wondering about why there are such a variety of things to try in one sitting. Burmese believe that with food you need a balance of flavours, textures, colours, and also that some foods are warming, while others are cooling. Combined with the seasonal availability of different foods, it means that locals often eat according to their preference and constitution, and the time of the year. Being mainly Buddhist, locals often observe monk’s fasting rules which means light food is only consumed before noon, and for some months, only vegetarian food is eaten.

One of the surprises of Burmese food is the range of salads made with rice, noodles, potatoes, tomatoes and even ginger root. Across Myanmar, dinner isn’t complete without a piece of palm sugar jaggery and a little fermented green tea salad. Yes, that’s right, in Myanmar, tea is eaten as well as drunk. The national delicacy, lahpet thoke, is made with seeds, nuts and oil, and although its appearance isn’t appealing, it is tasty. Apparently lahpet was an ancient symbolic peace offering to be exchanged and consumed after settling a dispute. Pickled tea leaf lovers say, like most Burmese food, you get more out of it if you eat more slowly. 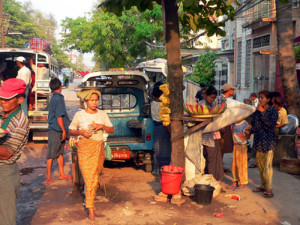 The unofficial national dish of Myanmar – called mohinga – gives some insight into the country. Rumoured to have the highest production and consumption of onions in the world, and a liking for fish sauces, pastes and dried fish, is it any surprise that the breakfast or lunch mohinga is rice vermicelli, in a fishy broth of garlic, onions, lemongrass, ginger, garnished with banana stem, boiled egg, fish cake and vegetable fritters.

Seafood features in coastal areas, while meat, poultry and beans are commonly used inland and in upper Myanmar. Visitors to Myanmar sometimes complain that the food is too bland compared to Thai cuisine, or the curries too oily. Despite the widespread use of fish pastes, it is possible to have vegetarian and vegan food, and in the most popular places there are restaurants offering animal-free dining.

Burmese are not big drinkers, and even though advertising for local rum and whisky covers every shop, few Burmese drink alcohol, even dedicated ‘beer stations’ seem to be places where locals watch and bet on European football.

No story about Myanmar’s cuisine is complete without mention of tea and teahouses. Sweet, milky Indian black tea is imbibed throughout the Land of Golden Pagodas, and teahouses function not just as places to drink and eat, but also as social centres. Order one cup of laphet yea and in no time you will get a small cup of milky tea, with sweetened milk at the bottom, and a selection of shredded coconut buns, semolina cakes, deep-fried sticky rice rolls and samosas. Some locals believe if you slurp you tea from the saucer, you get the full flavour.

Burmese have a sweet tooth, and at teahouses, restaurants and some sidewalk eateries you can try avocado milkshakes, fresh ice cream or the wonderful summer cooler, the faluda.

Here are a couple of recipes to try.

Heat a wok, add 4 tablespoons of cooking oil, and sauté 2 chopped onions and 2 garlic cloves, and add 400g of thinly sliced chicken meat. Add some soy sauce to taste, cover and cook for 5 minutes. Then add vegetables – 1/c cups of choko, bean sprouts, cabbage, cauliflower, green beans, dried mushrooms, dried wood-ear fungus – and an inch of celery and 2 spring onions. Once the vegetables are wilted, add 4 cups of water and bring to the boil. Just before serving, add 2 unbeaten eggs. Add salt and pepper to taste. 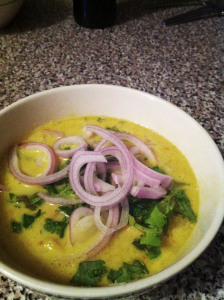 Put a little oil in a wok, add 3 chopped onions and let sweat. Mix 2 tablespoons of flour with 100ml of cold water, and add to the wok, along with a dash of fish sauce and stock cube. Simmer, then top up with 500ml of water and bring back to the boil.

In a frying pan, heat up a cup of vegetable oil, and add a few spoonfuls over a mix of 3 tablespoons of chilli flakes, 1 tablespoon of paprika and a pinch of salt. With the remaining oil snap a handful of dried rice noodles into the pan so they puff up. Take out to drain.

Mix minced ginger (½ inch), 4 garlic cloves, 2 shallots and 1 red onion and fry in a tablespoon of oil, then add 4 de-boned chicken thighs (sliced) and 1 tablespoon of paprika, and stir-fry till brown. Add 200ml of coconut milk and simmer.

Place noodles in a bowl, and add chicken broth, top with shallots, eggs and crispy noodles. Add a dash of fish sauce; serve with toasted chilli and a slice of lime.