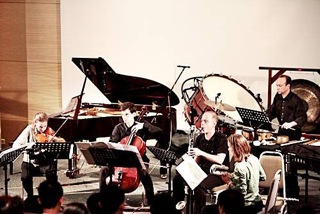 Contemporary ‘art’ music based on the classical tradition has seen a resurgence in Malaysia since the turn of the century. Although it existed as a discipline before this, the new wave of composers have breathed fresh life into the contemporary music sphere within the country, enabling new festivals and ensembles to flourish. The origin of this change is important as it marks the first effort by the already established Malaysian Philharmonic Orchestra (based in Kuala Lumpur) to commission local composers in 2002 (Sunetra Fernando, Tazul Izan Tajuddin and Chong Kee Yong). This led to a Forum for Malaysian composers in 2003 which cemented a unified group of composers and encouraged new composers as well as audiences for new music.

The forum helped these new composers to flourish and resulted in Chong Kee Yong winning the Malaysian Philharmonic Orchestra International Composer’s Award in 2004 with The Starry Night’s Ripples, which was influenced by Van Gogh, Stravinsky, Ligeti and Sciarrino. Chong was born in Kluang, Johor to palm oil farmers of Chinese origin and moved to Kuala Lumpur to study music with Chinese professors. He then studied in Brussels and developed his multi-textural style which betrays many influences as can be seen from his varied background. His music contains traces of Beijing opera, gamelan, European 20th century composers, electronics, kabuki, Bach and Malaysian folk music. His major works include Tearless Moon (2006), a funereal symphonic work, Echoed Dream (2002) for string ensemble and Timeless Echoes (2010) for solo cello, electronics and video installation:

Tazul Izan Tajuddin was born in Banting and now lives in the UK but remains inspired by Malaysian and South East Asian music such as gamelan, as well as Asian craft, visual arts, and Islamic art. He has performed in Traditional music, dance and choir groups, so has an innate understanding of the workings of this style as well as the western classical tradition. His style incorporates textures built by interweaving sounds.

Two other composers from the forum who favor a ‘modernist’ but more tonal approach are Johan Othman and Adeline Wong. Othman, who studied in America, developed a quasi-minimalist style mixed with a more traditional Malaysian quality, the result of which is a lively, colorful and sometimes jazzy style which is at once recognizably Malaysian and accessible. His opera Conference of Birds:

Wong creates complex soundscapes and rich textures, for example in her string quartet Longing which contains echoes of the traditional Malay Kompang drum ensembles, Malaysian harmony and the vocal elements of prayer, of which elements are used and built up to create a texture.

Hardesh Singh represents the crossover with modern Jazz, technology and film in Malaysian art music. His compositions inspired by Indian Clasical music and playing the guitar, range from soundtracks in popular films such as Amir Muhammad’s The Last Communist and pieces for his jazz ensemble: The 50 Cents Jazz Club.

Another notable composer is Chong Lim Ng, also known for his piano recitals, he has studied in London and Austria. He describes his work as emotional and engaging with Malaysian forms such as gamelan. His style varies from vibrancy and experimental boldness to simplicity and serenity. His influences range from Bach to Boulez swell as pianists such as Rubinstein. His pieces include ‘Three Sketches for Two Piano’ (included on the ‘Faith, Hope and Chaos’ CD) and ‘Xiang’ an orchestral tour de force written in 2006 for the Malaysian Philarmonic. He also helped to set up a foundation which supports orphaned children in Malaysia through musical fundraising and education and providing aid, support and food: www.heart-foundation.net/

More forums have produced younger talent and new interest with a new festival of Contemporary Music in Kuala Lumpur which has a young composers section. These events have yielded such new talent as Tan Zi Hua (winner of the HSBC young composers workshop 2008):

Also see this video on the KL Contemporary Music Festival 2009 for the latest developments in Malaysian art music:

And, last but not least, be sure to check out the Malaysian composers website which holds much information, interviews, news and recordings!