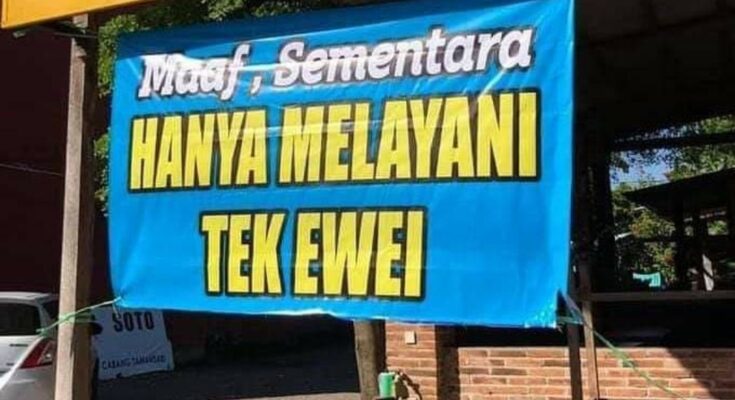 In precarious times, such as we all experience during this Covid epidemic, people tend to become morose, stressed out, or even utterly depressed. It is difficult to deal with such feelings. But the vast amount of entertaining, touching and hilarious videos, cartoons, and photographs in many languages posted on Facebook, WhatsApp and so forth since the start of the pandemic in March last year have been able to lift my spirits, if only for short time. But how do ordinary people in Indonesia cope? Are they able to convert misery into a laugh? Some can! Let’s take a closer look at this photograph of a banner attached to the poles of a food stall (warung). Actually, there are many similar photographs of this kind to be found on google, some already dating from 4 years ago. But since 2020 they have definitely gained a more poignant meaning. 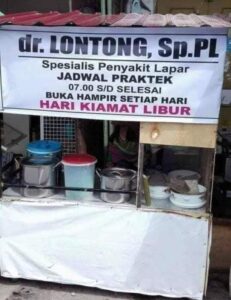 This banner informs the public that they can buy at the stall a popular dish called lontong, which consists of sticky rice cut into cubes served with fragrant broth and spicy condiments. The ingredients of the dish are kept in the pots, a jar and a plastic container placed on the table under the banner. So far nothing out of the ordinary.  But the banner tells us much more.

The vendor advertises himself (or herself) in bold and capital letters as a dr., meaning a physician. So, our vendor is a lontong doctor, which of course is a rather dubious type of medical expertise. He has also added the letters Sp. PL, which refer to another specialization besides lontong. The combination of dr. (specialization) and shortened version of another academic title is normal practice in Indonesia. This made me laugh, because it reveals the obsession of many Indonesians with academic titles, the more the better. Whether the designer of this banner intended to make fun of this custom? Perhaps he did, perhaps not.

The specialization Sp.PL is written out on the line below: the vendor promotes himself as a ‘Spesialis Penyakit Lapar’, meaning a specialist in HUNGER DISEASE. Auuuw, that hurts! Are people indeed going hungry in Covid times? Sadly, it is possible. If they still have a little bit of money, they can go to dr. Lontong’s food stall to buy his cheap dish. Otherwise, if they can only pass by his stall hungry. But at least they can pocket a healthy laugh!

Dr. Lontong’s patients can come to his medical practice from 07.00 in the morning until “finished” (selesai). Our doctor Lontong thus closes after his last patient has left, which is the normal practice for medical specialists. In the case of a food stall, however, it means closing time has come whenever all the food is sold. Remarkable is moreover, that dr. Lontong is an unusually accessible physician because in contrast to the majority of his medical colleagues his practice opens almost every day (buka hampir setiap hari). But as a lontong vendor, he obviously wants to reassure his regular customers that his lontong is on sale on a daily basis. This is also in his own best interest, because as a small vendor he is in need of a daily income. He probably has become increasingly desperate since Covid hit Indonesia, causing ever more hardship for all small vendors, traders, and peddlers. During the enacted restrictions last year, reinforced on 3 July, our dr. Lontong was only allowed to have his customers eat at his stall until eight or nine o’clock in the evening. But that deprived him of part of his income already, because he used to operate until late at night. Since the extraordinary increase in new Covid cases since the end of June this year, his situation has become even more precarious, because many people don’t dare to come out of the house and eat outside. 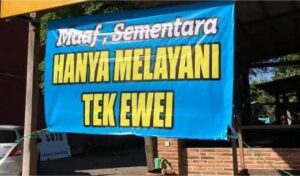 Some vendors have responded to this. One restaurant owner has put a banner at the entrance saying: sorry, for the time being we only serve “tek ewei”. How I love funny Indonesianized English! This specimen is definitely recent, because the term ‘take away’ has entered Indonesian vocabulary due to Covid.

Back to our dr. Lontong. Apparently, he also feels that he needs some free time. The last line of the banner decorating his stall states that he takes a day off on a day not to be found on the calendar. It is the day called Hari Kiamat. That is the Day of the Final Reckoning or – even more ominous – the Day of the World’s Ending. Feel free to laugh again. I did!